Three million credit card borrowers could receive help repaying their loans, including interest and fees waived in some cases.

Credit card companies will be forced to do more to help their struggling customers thanks to new rules from the financial watchdog, which come into force on March 1.

The new requirements from the Financial Conduct Authority will help those in persistent debt – defined as those paying more in interest and charges than they have repaid on their borrowing over an 18-month period.

Credit card firms will have to take a series of escalating steps to help customers who are making low repayments over a long period, starting when they have been in persistent debt for more than 18 months.

They will have to contact customers to prompt them to up their repayments and telling them their card could be suspended if they do not.

These borrowers can end up paying as much as £2.50 in interest for every £1 of their balance they repay, making it very difficult to clear.

Lenders will now have to do more to prompt customers to increase repayments and in some cases waive interest and fees.

The FCA says the new rules could help borrowers save up to £1.3 billion per year, in crippling interest charges on the four million accounts in persistent debt.

Lenders have had little incentive to help these customers out in the past as they are far more profitable than borrowers who clear their balance each month.

The new rules enforce a timeline for when a company must contact customers in persistent debt to explain how they could benefit from making larger repayments and then the point at which they must waive interest and charges.

While the changes will be implemented on March 1, credit card companies will have six months to fully comply.

Firms that fail to do so will be subject to action by the FCA.

Christopher Woolard, executive director of strategy and competition at the FCA, said: ‘These new rules will significantly reduce the numbers of customers with problem credit card debt.

‘Credit cards offer customers flexibility to manage their finances and repayments, but with this there is a risk customers can build up and hold debt over a long period of time – without making much headway on the outstanding balance.

‘Under these new rules firms will have to help customers to break the cycle of persistent debt and ensure customers who cannot afford to repay more quickly, are given help.’

What will the FCA rule changes mean?

The new rules will mean that when a cardholder is in persistent debt, after 18 months, firms must contact them to explain the benefit of making larger repayments to help them clear their debt more quickly, and limit interest charges.

They will also point them towards debt help and advice.

At the 27-month point, customers will get a reminder if it looks like they will continue in persistent debt up to 36 months.

If customers are still struggling under the weight of their debts after this 36-month point, the lender will offer repayment options to help them clear their balance more quickly. Any customers who cannot do this will be offered help including reduction in interest, fees and charges, according to the FCA.

This will help them to repay amounts more quickly as all of their monthly repayments will go towards paying down their debt rather than paying off interest charges.

Along with the new rules credit card firms have agreed to some voluntary measures that could further help customers.

Lenders have come under fire for automatically increasing credit limits, without customer agreement.

Now customers will be able to opt out of automatic increases. Those with persistent debts for more than a year will not be offered them at all, which should stop around 1.4 million accounts being handed extra opportunity to escalate their debts according to FCA figures. 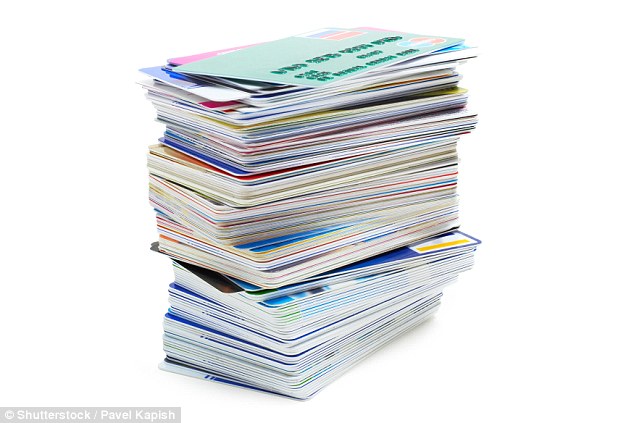 Piling up: Credit card interest and charges can mount up quickly, making it harder to clear a balance

The FCA expects the new rules to help at least half (two million) accounts to clear their debt before they reach the three-year mark, with a further 1.4 million at the 36-month point.

It estimates the total savings will amount to between £31 million and £1.3 billion per year.

Is this just the tip of the iceberg?

The industry is hailing the changes, which put more on an onus on firms to help their customers, but some suggest they won’t tackle the issue completely.

It will take a while for borrowers to feel the effects and more needs to be done to help people avoid persistent debt issues in the first place, according to debt charity StepChange.

Peter Tutton, head of policy at StepChange debt charity, said: ‘We welcome the FCA’s recognition that solutions are needed for the 3.3 million people trapped in persistent credit card debt.

‘But we remain concerned that the FCA has not yet taken adequate steps for the flow of new borrowers who may be heading towards persistent debt. There is a need to break the cycle of firms allowing customers to build up expensive long-term debt on what is meant to be a short-term borrowing facility.

‘The new rules do not address the continuing risk that firms will allow new profitable customers to rack up expensive debt for a long period – only to inflict unattractive compulsory action on them further down the line. The regulator will need to keep this under scrutiny. The FCA says it plans to review the effectiveness of the new rules in 2022 or 2033 but we would urge earlier intervention if needed.’

She says: ‘This is welcome news for those who are struggling with persistent credit card debts. The new rules have been set up to force credit card companies to help people in persistent debt slowly but surely reduce the amount they owe rather than allow customers to get stuck in a cycle of unmanageable debt. The move should help give some breathing space to people who struggle to repay what they’ve spent over a long period and curtail the amount they rack up in interest.

‘It’s great to see the FCA take steps to help tackle the nations debts but this is only tackling the tip of the Iceberg, more work is needed to stop people falling into a cycle of persistent debt – prevention is far better than a cure.

‘If you’re currently paying interest on your credit card check to see if you’re able to take out a 0 per cent balance transfer card instead to save you money on interest fees.’

You can read more about balance transfer credit cards, how they work and the best deals here.

If you are struggling to clear your credit card debts it can be tempting to bury you head in the sand, but there is free help and advice out there which can help.

This is Money has put together a 10 step plan to help get out of debt which you can read in full here.

You can also get free help and advice from debt charities, which have guides and factsheets or let you speak to an adviser who can help explain your options.