At first glance it might not look like much – but, with a fuzzy purple and green photo, NASA’s New Horizons spacecraft has made history.

On December 5, New Horizons captured an image said to be the farthest from Earth ever taken, at a staggering 3.79 billion miles away.

And, just hours later, it beat its own record.

According to NASA, the remarkable false-color images sent back by New Horizons are also the closest-ever images captured of objects in the Kuiper Belt.

On December 5, New Horizons captured an image said to be the farthest from Earth ever taken, at a staggering 3.79 billion miles away. And, just hours later, it beat its own record. The second observation revealed Kuiper Belt objects HZ84 (left) and 2012 HE85 (right)

When New Horizon’s snapped a photo with its telescopic camera for a routine calibration frame of the Wishing Well star cluster, it was farther into space than even NASA’s Voyager 1 had been when it captured its famous ‘Pale Blue Dot’ image of Earth, the space agency says.

At the time, New Horizons was 3.79 billion miles (6.12 billion kilometers) from Earth.

Voyager, by comparison, was 3.75 billion miles (6.06 billion kilometers) from Earth when it captured its famous photo in 1990.

According to NASA, New Horizons is now the fifth spacecraft to fly beyond the outer planets of our solar system.

Hours after its first record-breaking image on Dec 5, it captured another.

And, NASA says they’re the closest images yet of objects in this region. 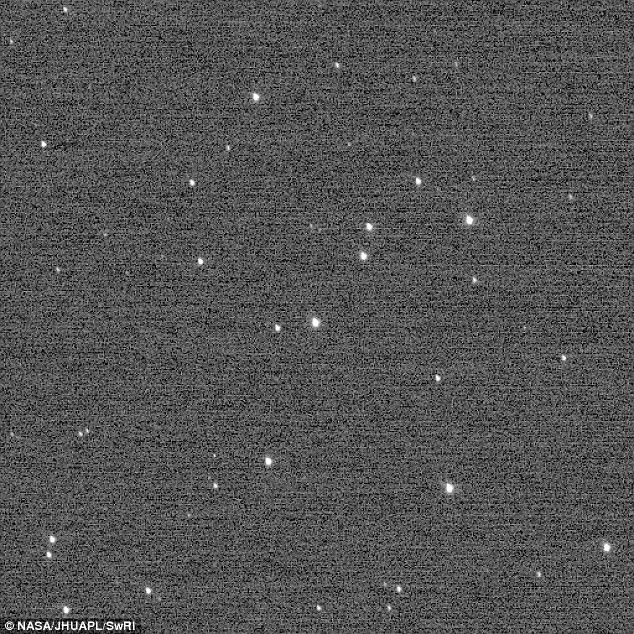 When New Horizon’s snapped a photo with its telescopic camera for a routine calibration frame of the Wishing Well star cluster (shown), it was farther into space than NASA’s Voyager 1 had been when it captured its famous ‘Pale Blue Dot’ image of Earth, the space agency says

‘And now, we’ve been able to make images farther from Earth than any spacecraft in history.’

Objects at this distance are extremely difficult to study with telescopes, meaning much about MU69 remains a mystery.

Despite this, Nasa’s New Horizons team has spent months gathering data on the object in preparation for New Horizons’ flyby in January 2019.

NASA also plans for the spacecraft to observe at least two-dozen other KBOs, dwarf planets, and Centaurs – the former KBOS in unstable orbits that cross the orbits of giant planets.