New image of Meghan is reminiscent of Wallis Simpson. But how else do they look alike?

Wallis & Meghan, the Duchesses of Twinsor! Newly released image of Meghan with a lingering stare struck some observers as uncannily reminiscent of Wallis Simpson. But how else do they look alike?

By Anna Pasternak For The Daily Mail

The blood-red blouse has a long pussy-bow to the side. The camera is faced square on. The Duchess, it seems, is making a statement of firm resolution.

But which Duchess are we talking about? A newly released striking picture of Meghan taken by celebrity photographer Misan Harriman shows her wearing a lingering stare and perhaps a trace of a smirk along with an eye-catching design by Another Tomorrow, a New York fashion label.

The image struck some observers as being uncannily like the outfit of another Duchess, Wallis Simpson — who wore a very similar item in 1971, in red chiffon with a dramatic long tie-neck. Both American Duchesses even had their hair pulled tightly back for the respective portraits.

Of course, ever since Meghan entered — then abruptly quit — the royal firmament, comparisons have been made between her and Wallis Simpson. 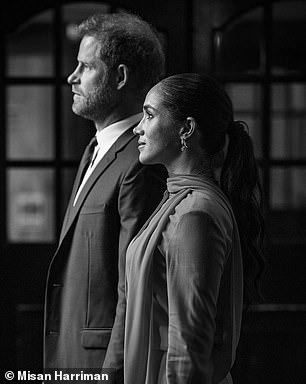 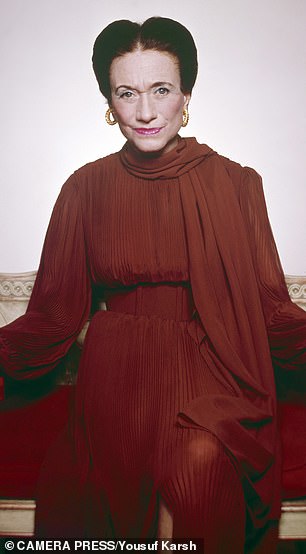 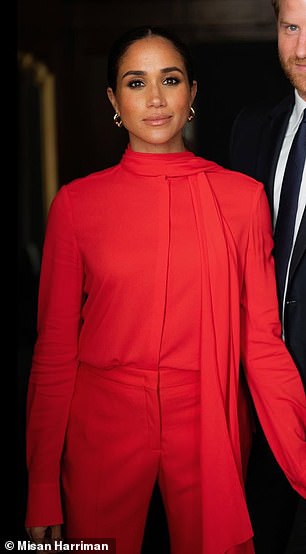 Staring defiantly into the camera: Wallis Simpson in 1971 and the Meghan picture released this week

Both were American divorcees who met their British princes when they were 34. Both helped to generate international interest — and not a little controversy — in the House of Windsor.

Comparisons have also been drawn between Harry and Edward VIII, our current King’s great-uncle. Though the Duke of Sussex does not share Edward’s penchant for expensive clothes, he displays the same besotted devotion to Meghan that Edward did to Wallis. More alarmingly, post-Megxit, Harry often seems to carry his ancestor’s rather haunted expression.

Royal historian Hugo Vickers noted this week that he had ‘never seen anyone with such sad eyes’ as Edward. Harry, Vickers believes, now often betrays a similar grief. Little wonder, given that he was until recently all but estranged from his close family. 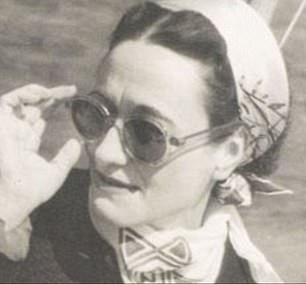 Shades of the past: Days out in the sunshine

While Meghan is often keen to suggest an image of strength and power in her pictures, boldly staring into the camera, Harry looks far less confident. And, as our pictures today show, this week was far from the first time that Meghan has apparently modelled her look on Wallis.

Asked by a friend after the 1936 Abdication why she devoted so much time and attention to dressing, she replied: ‘My husband gave up everything for me. I’m not a beautiful woman. I’m nothing to look at, so the only thing that I can do is dress better than anyone else.’

Uniforms and uniformity: Bahamas in 1942 and Sydney, Australia, in 2018 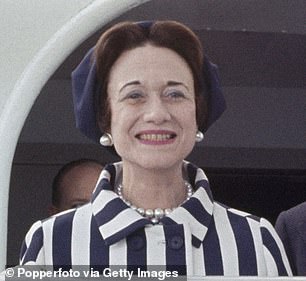 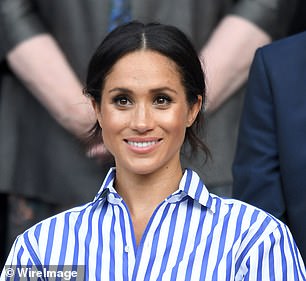 Earning their stripes: Wallis after Atlantic crossing at Southampton in 1967, Meghan at Wimbledon in 2018

There is another difference between the two women. During her long exile, not once did Wallis bleat about the injustice meted out to her by the royal machinery. And unlike Harry, who carped about his family to Oprah Winfrey, Edward also kept schtum.

Meghan was given everything by the Royal Family that Wallis was denied: a HRH title, a royal wedding and a warm welcome by the Windsors. Yet none of this was enough for the former Ms Markle.

Meghan may well be a fan of the Duchess of Windsor’s elegance. Now, some would say she might do well to emulate Wallis in other ways, too — and practise a dignified silence.

Anna Pasternak is the author of The American Duchess.