An implant that resembles the wire over a champagne cork could offer a new way to tackle high blood pressure.

The tiny cage-like device is implanted in an artery in the neck where specialised nerves are located that are key to the body’s natural blood pressure control mechanism.

The nerves, called baroreceptors, act as sensors that detect when artery walls are under pressure — a sign that blood pressure is rising too high — and then relay this information to the brain. As a result, the heart rate drops, causing blood vessels to dilate or widen which lowers blood pressure.

But research suggests that long‑term raised blood pressure can cause the baroreceptors to malfunction so the nerves stop responding to tension building in the artery walls — and start to interpret high blood pressure as ‘normal’.

The new device, developed by U.S.-based Vascular Dynamics, puts pressure on the sensors that resets them, so the brain believes that blood pressure is permanently raised and takes steps to bring it back down. More than 200 people are taking part in a clinical trial of the device following research showing it significantly lowered dangerously high blood pressure in a small group of patients.

There are an estimated 12 million people in the UK with high blood pressure, and, left uncontrolled, it can increase the risk of stroke, heart attacks and vascular dementia.

Around 500,000 people in the UK have so-called resistant hypertension, meaning their blood pressure remains high despite taking three or more different types of medication for it.

The four-sided titanium implant, which is roughly the size of a fingernail, may be especially beneficial for this group of patients. 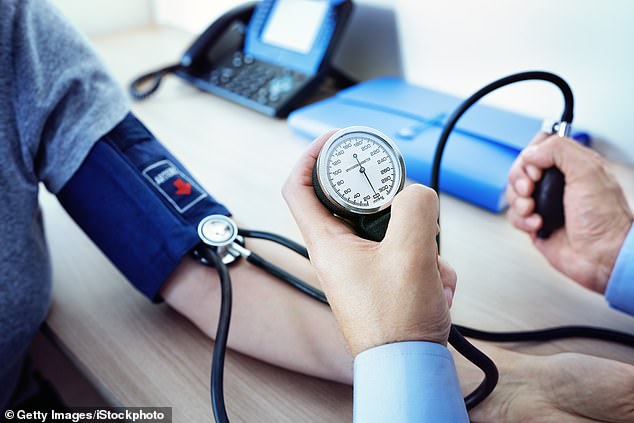 It is inserted folded up through a tiny incision made in an artery in the groin. Loaded inside a tube or catheter, it is navigated via the blood vessels and up into one of the two carotid arteries in the neck into an area called the carotid sinus, a collection of nerve endings where the baroreceptors are situated.

The procedure is carried out under local anaesthetic.

Once in place in the neck, the cage is opened and positioned so that it puts a tiny amount of force on the baroreceptors.

A study reported in The Lancet two years ago involving 30 patients in The Netherlands and Germany who’d had the device put in, showed that in the majority of patients, blood pressure reduced towards a normal level within a few months.

A trial is now under way with about 200 patients whose high blood pressure has not been controlled by medication.

Dr Punit Ramrakha, a consultant cardiologist at the Hammersmith Hospital in London, says targeting the baroreceptors can have ‘a great impact’ on blood pressure.

He adds: ‘The initial clinical trial was encouraging and it would be exciting to see if this new trial will allow the device to be licensed for more widespread use.’

Dementia risk in your eyes

The eyes could be a window into your risk of dementia.

University of California researchers who asked people to memorise lists of numbers found the pupils enlarged more in those with slight memory problems than in the others. A tiny part of the brain called the locus coeruleus is the first to be clogged by tau, a protein that is a hallmark of Alzheimer’s disease and is also key to pupil size.

Measuring the speed of pupil dilation could prove to be a simple and inexpensive way of spotting people at risk of Alzheimer’s, reports the journal Neurobiology of Aging.

Dermatologists have discovered that women with a ring finger long than their index finger — a so-called ‘masculine’ ratio — are more likely to develop acne.

Writing in the Indian Journal of Dermatology, the team from Menoufia University in Egypt say that exposure to high levels of testosterone (which affects the growth of the ring finger; oestrogen stimulates the index finger) in the womb might not only lengthen a female’s ring finger, but also make her more sensitive to the hormone — known to be a factor in female acne.

Deakin & Blue is turning the tide on plastic waste, making its swimsuits from yarn made from plastic scraps

Things that are good for you and the universe.

You probably don’t realise your bikini is made from plastic, but that’s exactly what nylon is.

However, sustainable swimwear brand Deakin & Blue is turning the tide on plastic waste, making its swimsuits from 100 per cent Econyl, a regenerated yarn made from plastic scraps — taking these out of the environment, saving them from ending up in landfill or in our oceans and reusing them, rather than making fresh plastic.

Better yet, the new material is even tougher than virgin nylon — and twice as durable against salt water, chlorine and oils such as those in sunscreen, meaning these swimsuits last longer, too.

All made in London, products are also packaged in reusable and recyclable materials, and a portion of the profits is donated to marine conservation activities.

People with depression could experience a pick-me-up simply by increasing their body temperature.

In a small 2016 study, people with depression were put in a chamber that raised their body temperature to 38.5c — and reported a more significant reduction in symptoms compared to those in a placebo group, reported the journal JAMA Psychiatry.

The ways sex affects your body. This week: The testicles

Testicles enlarge by half as much during sex, according to Vivek Wadhwa, a consultant urological surgeon at University Hospitals Birmingham NHS Foundation Trust and Spire Parkway Hospital.

‘During arousal, the testes increase in size due to blood vessels engorging with blood,’ he says.

‘This causes thickening of the skin of the scrotum (the outer sack) and the filling of the testicles.’

However this enlargement is not easy to see because during sex, the testicles are drawn up into the groin (by the cremaster muscle located in the scrotum), both to protect them and to give the sperm a shorter journey from the testes to the end of the penis.