New Jersey will now require residents to wear masks outside in all public places where social distancing isn’t possible, joining a growing list of states that are strengthening face covering rules as coronavirus continue to surge.

Gov Phil Murphy announced the new executive order on Tuesday, just days after calling for a national requirement for masks outside.

The order broadens a previous state mandate which required residents to wear face coverings in public while indoors at stores and other businesses.

Experts say wearing a mask can reduce a person’s risk of spreading or contracting coronavirus by 70 percent.

Gov Phil Murphy signed an executive order on Tuesday which will require New Jersey residents to wear face coverings in outdoor public spaces where social distancing is not possible. Murphy explained the move in an interview with MSNBC (pictured) 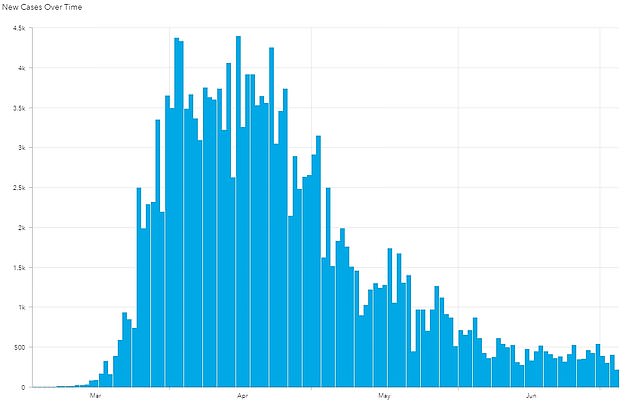 More than 15,000 people have died from COVID-19 in New Jersey as of Wednesday. The chart above shows the number of new cases per day since the height of the state’s outbreak in April

More than 15,000 people have died from COVID-19 in New Jersey, ranking it second after neighboring New York state in the total number of deaths, according to a Reuters tally.

Murphy said his requirement has a three exceptions: for children under two years of age, people eating or drinking at an outdoor dining establishment and individuals for which a mask would inhibit health or safety.

He also said that the requirement does not apply when a person is by themselves or exclusively with family.

The Democrat governor explained the move in an interview with MSNBC, saying that the requirement is critical to controlling the spread of the virus in the state, an early hot spot where rates of the virus have started to creep up again.

‘There’s no question that face coverings are a game-changer,’ he said, acknowledging that it would be hard to enforce the order but saying the state needed to build on the progress made in its battle against the virus.

‘We’ve gone through hell in New Jersey. We’ve lost over 13,000 people, we’ve brought our numbers way down. We can’t go through that hell again.’ 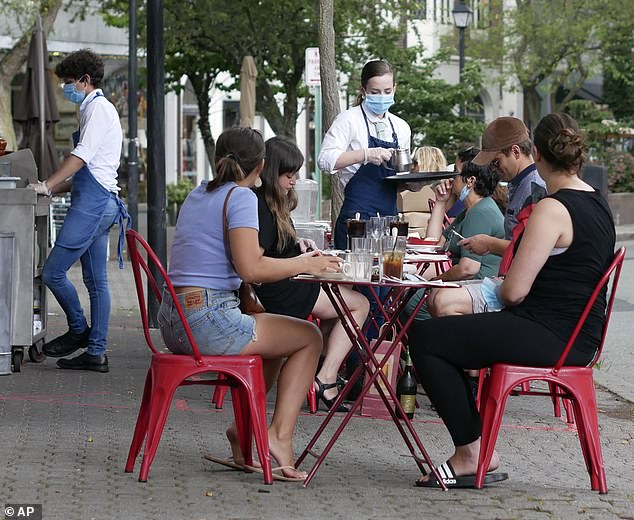 Unmasked diners are seen eating outside a restaurant in Montclair, New Jersey, on July 1

The order is one of the most stringent coronavirus restriction on public activity in the United States.

Many states require use of masks in public indoor areas and recommend they be used outside.

Murphy is taking action as infections skyrocket in many other states, including California, Florida and Texas, and health officials warn of a coming spike in the death toll from the virus, which has killed more than 131,000 Americans.

The US outbreak crossed a grim milestone of over three million confirmed cases on Tuesday, roughly equivalent to one percent of the population, as more states reported record numbers of new infections.

In New Jersey, some people voiced surprise that face coverings were not already mandatory.

‘I figured that was already the rule – it’s confusing that it’s not clear and I try pretty hard to keep up,’ said Calia Nochumson, a 42-year-old high school teacher from Maplewood.

She said she was disappointed to see so few people wearing face coverings during a recent trip to the beach. 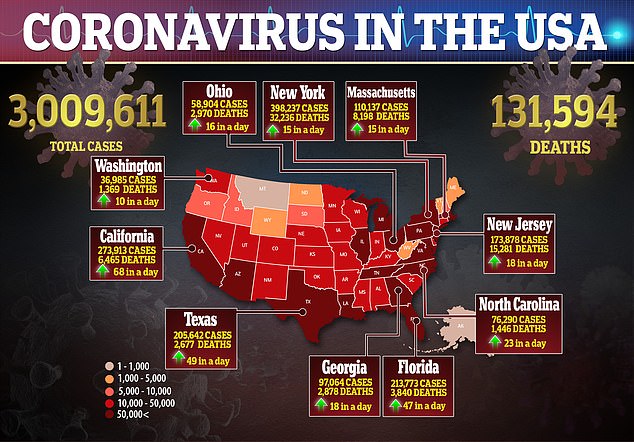 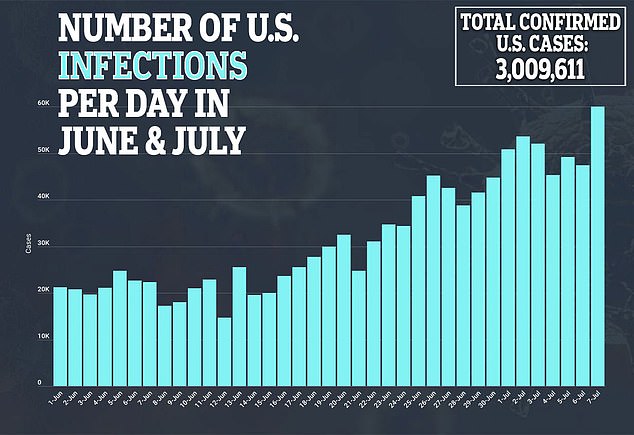