New coronavirus testing lab opens at Cambridge University as Government battles to reach its 100,000-a-day target for checks by the end of the month

Cambridge University has set up a coronavirus testing laboratory to help meet the Government’s 100,000-a-day target.

The facility at the university’s Anne McLaren laboratory is a ‘joint collaboration’ with pharmaceutical giants AstraZeneca and GlaxoSmithKline as part of a ‘national effort’ to increase testing capacity.

Scientists will process tests and work to identify alternate chemical reagents to the ones currently being used, which are in short supply.

The Government has promised to hit 100,000 tests a day by the end of April, and Foreign Secretary Dominic Raab yesterday insisted ‘good progress’ was being made.

But Chief Medical Officer Chris Whitty appeared to admit there had been failures in this country’s initial testing response. He added: ‘We all know that Germany got ahead in terms of its ability to do testing for the virus and there’s a lot to learn from that.’

The 100,000 target has been jeopardised because there is no successful antibody test, which establishes whether people have had the disease.

Mr Raab would not say whether this meant the Government would now focus solely on conducting 100,000 antigen tests, which show if people have the virus. He said: ‘Lots of these things are in very high demand but we are doing everything we can on every front to get all of the testing capabilities we need. But yes, the Health Secretary’s 100,000-per-day target still stands.’ 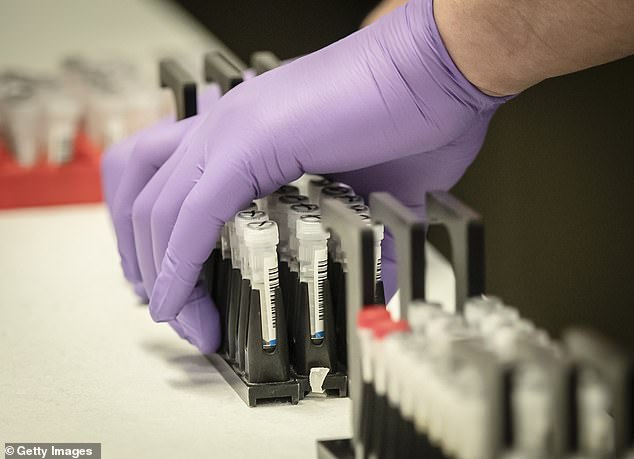 Department of Health figures show that 14,006 tests were carried out on Monday

NHS scientists claimed the Health Secretary’s pledge to test 100,000 people a day by the end of April was impossible because of a lack of vital testing equipment.

They said there were major shortages of reagents – chemicals that extract the genetic code of the virus from swabs so they can be tested.

But the Cambridge facility aims to overcome this problem by looking at alternative chemicals. The facility was announced in a joint statement from the university, AstraZeneca and GSK.

It said: ‘A new testing laboratory… will be used for high throughput screening for Covid-19 testing and to explore the use of alternative chemical reagents for test kits.

‘Alongside this new testing facility, GSK and AstraZeneca are working together to provide support to the UK national testing centres… to help the national testing system to continue to expand capacity.’

Department of Health figures show that 14,006 tests were carried out on Monday.

This is significantly behind other countries including Germany, where about 70,000 people are being tested every day.