New aerial images show how overflowing lakes have darkened and covered parts of the Carolinas in the wake of Hurricane Florence.

Florence, which devastated the area over two weeks, leaving 47 dead in its wake, caused rains so heavy there were 19 new water level records on rivers and streams in North Carolina and 11 in South Carolina.

The images show how parts of land are pock-marked by black water, while others are completely drowned by overflowing rivers.

Perhaps the hardest hit by the hurricane was the city of Goldsboro in North Carolina. 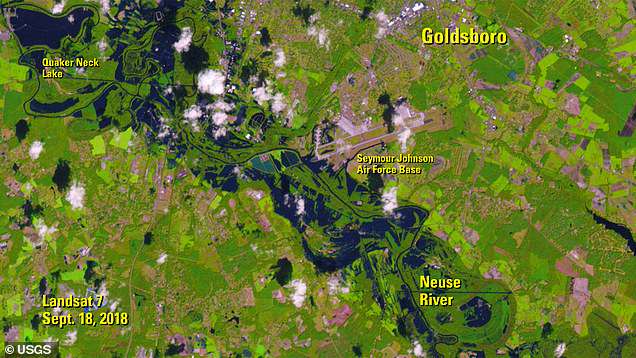 Goldsboro is located about 100 miles from the coastline where Florence first hit, but images show flood water stretched for miles from the Neuse River.

An image taken on September 18 shows water pooling onto the Seymour Johnson Air Force Base and covering swaths of city land.

The United States Geological Survey (USGS) says the Neuse River crested at 27.6 feet near Goldsboro on September 18, and the river stayed above the flood mark of 18 feet for almost a week.

Conway, in South Carolina, was also badly hit, and has faced a more severe aftermath than some other towns. 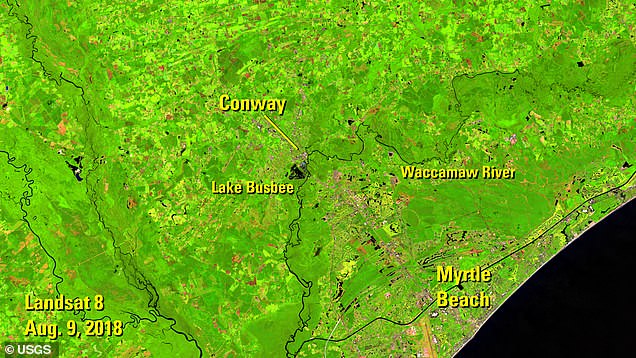 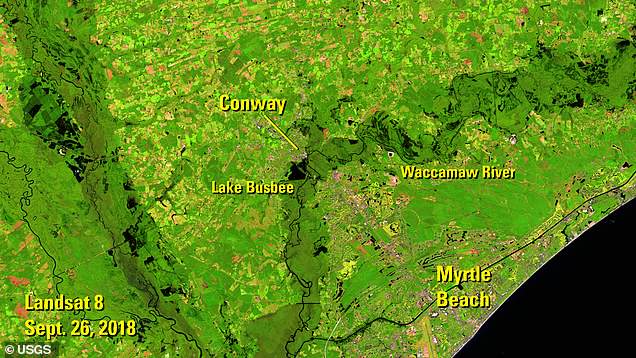 While most of the other rivers have begun to recede, the Waccamaw river only peaked on Wednesday after reaching a depth of more than 21 feet.

On Thursday, the mouth of the river overflowed, further damaging surrounding areas which were already flooded.

On Friday, WMBF reported the river was still at 20.6 feet on Friday afternoon, and was expected to remain above the record high of 19.1 feet, set by Hurricane Matthew, over the weekend.

Experts expect the river to fall by Tuesday, but major flooding is expected to continue for the next 10 days, if not longer. 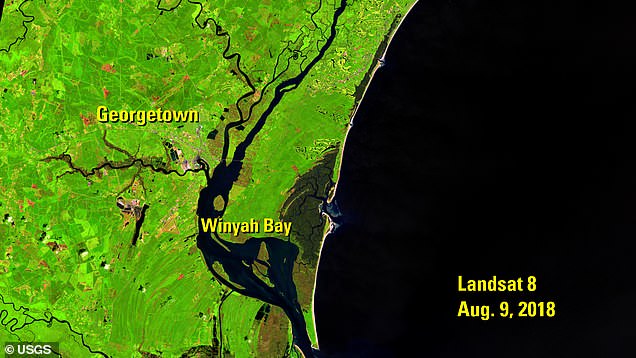 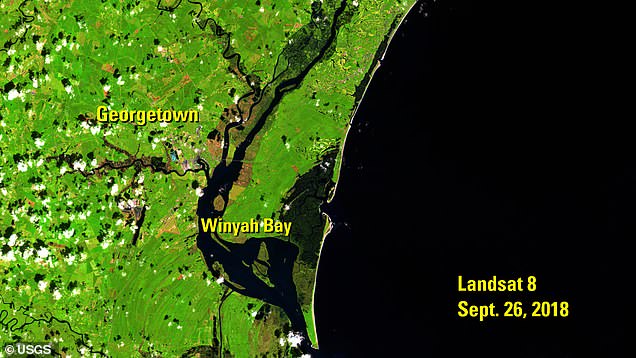 In Georgetown, South Carolina, residents are still waiting for the worst of their flooding.

The town rests on the banks of Winyah Bay, where five rivers meet – including the swollen Waccamaw.

Images taken on Wednesday shows areas darkened by saturated soil from rivers beginning to spill over.

On the same day, Georgetown Mayor Brendon Barber told residents and reporters the flood waters appeared to be slowing, but when they arrived in the town, they would act as a ‘silent assassin’.

Thousands of residents have been urged to evacuate before heavy flooding begins, and FEMA says they will be out of their homes for weeks.

‘A lot of the country thinks that Florence came and went, but unfortunately a lot of that water, it takes weeks for it to process down,’ Administrator Brock Long said.

‘The real frustrating part for the citizens impacted is they’re not going to be able to go home into these isolated communities for a matter of weeks.’