New morning-after pill costing HALF to prompt a price war

A high street retailer has become the first to launch a generic emergency hormonal contraceptive pill (EHC) at half the price of branded versions – prompting concerns it could result in a rise in ectopic pregnancies and STDs.

The morning-after pill can set a women back as much as £31.60 but is now available from Superdrug for just £13.49.

Ezinelle contains the same active ingredient as popular brand Levonelle and is said to be just as effective.

Health charities have urged other big retailers to follow suit to make it more accessible to women in the UK, where it costs up to five times more compared to other areas of Europe.

But others warn the move could lead to higher rates of ectopic pregnancies – when a fertilised egg implants itself outside of the womb – which if not treated, can be fatal.

It is also feared it could edge the UK closer to a sexual health crisis by encouraging women to be less careful about protection against sexually transmitted diseases.

Levonelle and ellaOne are the two most popular branded morning-after pills available in the UK.

Cheaper generic versions have been recently become accessible online, but Superdrug is the first high street retailer to bring out a reduced priced version, called Ezinelle.

A report revealing the pill can be bought for as little as £5.50 in France last year had prompted calls for the cost to be reduced in the UK.

According to research from the European Consortium for Emergency Contraception, the UK is the country in the EU with the highest proportion of women who have used emergency contraception at 61 per cent.

In the majority of EU countries the figure is much lower at around 20 per cent. 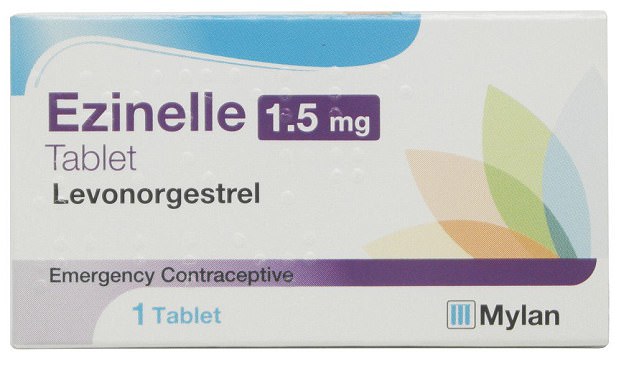 Superdrug’s generic Ezinelle contains levonorgestrel, the same ingredient in brand Levonelle, is sold for £13.49 – significantly less than the £25 to £30 chemists charge for branded pills

Dangers and risks of the drug becoming cheaper

Figures released by Public Health England show 41,193 people were diagnosed with gonorrhoea in 2015, an increase of 10 per cent on the previous year.

Dr Anthony McCarthy from the Society for the Protection of Unborn Children (SPUC) said: ‘It should worry us that Superdrug is being praised by the abortion industry for pushing drugs which, as well as possibly destroying early human lives, can seriously damage the women who take them.

‘This has nothing to do with medicine or any serious approach to cutting STDs or unplanned pregnancies.’

Yet the NHS says taking the emergency contraceptive pill has not been shown to cause any serious or long-term health problems.

Ezinelle contains the active ingredient levonorgestrel, the same as Levonelle, in the same quantity at 1.5mg.

Like Levonelle, it can be taken within 72 hours of unprotected sex or if a usual contraceptive method has failed and it works by delaying the ovaries from releasing an egg.

Ezinelle is now available at over 200 of its pharmacies and Superdrug Online Doctor, and will be sold through Superdrug.com in the autumn.

Currently, women must have a short consultation with a pharmacist before receiving emergency contraception in the UK, and some have suggested it should be available to buy ‘off the shelf’.

BPAS said it intends to keep campaigning on this issue until all retailers ‘do the right thing’ and ‘offer women a fairly priced product’.

‎Chief executive Ann Furedi said: ‘We know the high cost of emergency contraception can be a major barrier to women accessing it when their regular method fails.

THE MAIL’S DR MAX PEMBERTON: IT’S NOT A HARMLESS DRUG

When it comes to the morning-after pill, having a levelheaded debate seems almost impossible.

I think the problem is that this medication has become too politicised.

The feminist agenda dictates that any attempt to limit or curtail the morning-after pill is seen as an attempt to control women’s bodies.

But I fear that we’ve lost sight of the fact that this is not a harmless drug. Like all medications, it can have serious side-effects and shouldn’t be handed out freely.

Furthermore, what the pill is being used for – to prevent pregnancy after unprotected sex – shouldn’t be taken lightly either.

While we become increasingly cautious around the prescription of some drugs, groups such as the BPAS would have us dish out morning-after pills like Smarties.

‘Superdrug has illustrated that where appropriate it’s perfectly possible to sell this safe and effective medication to women at a significantly more affordable price than is currently on offer.

‘There is frankly now no excuse for others not to do the same.’

Michael Henry, healthcare director at Superdrug said its new drug meant that the emergency pill ‘could eventually be cheaper everywhere, giving women more choice and access to this medication at a time when they are most in need’.

While the medication is available for free on the NHS, GP presenter of Channel 4’s Embarrassing Bodies, Dr Pixie McKenna, pointed out that emergency contraception is almost inevitably needed at times when the surgery doors are shut.

‘As it is a time sensitive issue, quick and discreet access is imperative,’ she said.

‘As doctors we always try to prescribe generic drugs as we are confident their effectiveness won’t be compromised because they cost less.

‘This is a very positive move by Superdrug to help customers access effective emergency contraception without having to consider compromising on quality or cost.’

In 2015, the morning-after pill was made officially available in all pharmacies to girls under 16 for the first time – a development that was not without opposition.

MORNING-AFTER PILL CAN FAIL IN WOMEN 11 STONE OR OVER

New guidelines recently warned the emergency pill can fail when taken by those who weigh 11 stone or more – and experts recommend women use the emergency coil instead.

Those who have a body mass index (BMI) that is over 26 are also at risk according to new guidance.

The news is likely to be alarming for many, given that more than half of UK women are thought to weigh more than 11 stone.

It is understood the drug may be diluted in bigger women or broken down more quickly by their bodies.

The advice from the Faculty of Sexual and Reproductive Healthcare (FSRH) urges pharmacists and doctors to inform overweight women of the risk of failure.

They have been told to recommend two morning-after pills be taken – double the dosage – or to urge the use of the emergency coil instead.

NICE said the coil is the best way to avoid becoming pregnant after unprotected sex.

The coil, which is inserted by a nurse or doctor, is more than 99 per cent effective and works as soon as it is implanted.

It can be left in place for up to a decade, but if a woman decides she wants to get pregnant it can be removed quickly.

The morning-after pill is slightly less effective – between 98 and 99 per cent. But these statistics apply only if it used correctly, and it is not considered suitable for regular use.