A new mother has shared a warning about the importance of advocating for your health after revealing her doctor told her to lose weight to remedy a health symptom that was later diagnosed as bone marrow cancer.

Jen Curran, a 38-year-old comedian from Los Angeles, took to Twitter on Monday to share her story in a lengthy thread, explaining that seeking a second opinion after getting ‘the old “lose weight” diagnosis’ from her doctor may have saved her life.

‘Wanna hear a crazy story? I’m a new mom & I had protein in my urine during and after pregnancy, which is bad. A doctor told me to “lose weight” & it would go away. Didn’t want me to see me back for months. So I got a second opinion. Turns out I have bone marrow cancer,’ she wrote. 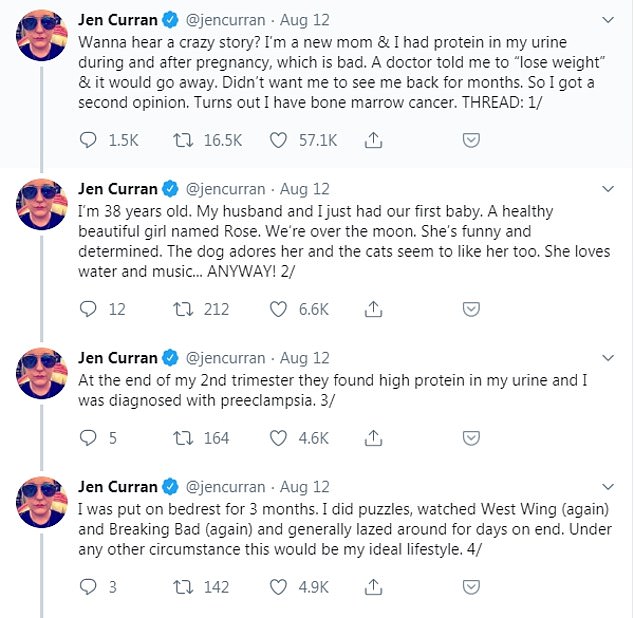 Opening up: The 38-year-old comedian from Los Angeles shared her story in a lengthy Twitter thread on Monday

Jen, who is the co-founder of The Ruby LA, a comedy theater and school, welcomed her first child six months ago, a baby girl named Rose.

The mother of one said that during the second trimester of her pregnancy, she had high blood pressure and there was a high amount of protein in her urine.

Her OBGYN diagnosed her with the pregnancy complication preeclampsia and put on bed rest for three months. However, the doctor was ‘unusually worried’ about the protein in her urine and insisted that she see a kidney doctor after she welcomed in her daughter in February.

‘I didn’t ask for a recommendation,’ she admitted. ‘Since I had a new baby to lug with me, I assumed it would be easiest to go to a doctor covered by my insurance, near my house. Whoops.’

Jen said that when she met with the doctor, the protein was actually higher than it had been when she was pregnant. 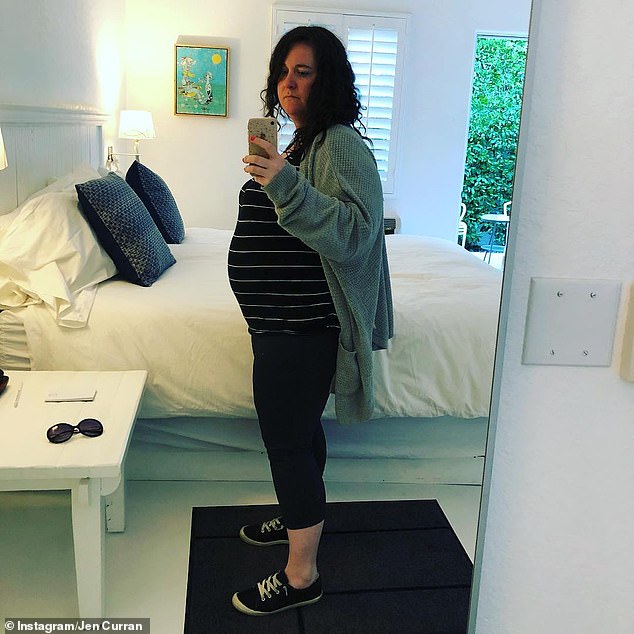 Warning: Jen, who was diagnosed with preeclampsia during her second trimester (pictured), said her OBGYN was concerned about the high level of protein in her urine 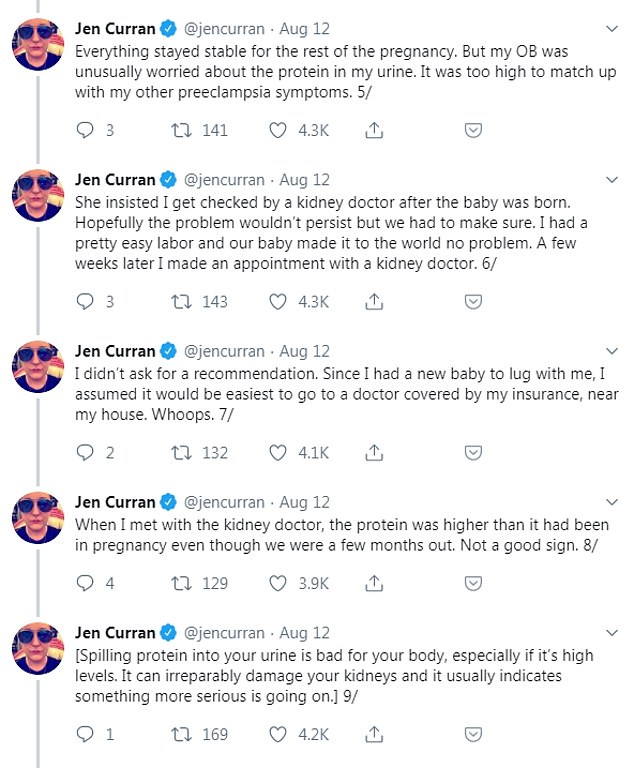 Start of it all: After she welcomed her daughter Rose in February, she went to see a kidney doctor per her OBGYN’s recommendation

‘Spilling protein into your urine is bad for your body, especially if it’s high levels. It can irreparably damage your kidneys and it usually indicates something more serious is going on,’ she explained.

However, the kidney doctor wasn’t at all concerned.

‘It can take up to a year for things to return to normal after pregnancy,’ she told her.

The mom explained that her body had already recovered from birth in other ways, and she felt uncomfortable with the doctor’s answer.

‘The doctor blinked at my lab results. “Can you start dieting and exercising? Try to lose some weight?” Hmm. Interesting. I was familiar with this move by a medical professional. The old “lose weight” diagnosis,’ Jen recalled. 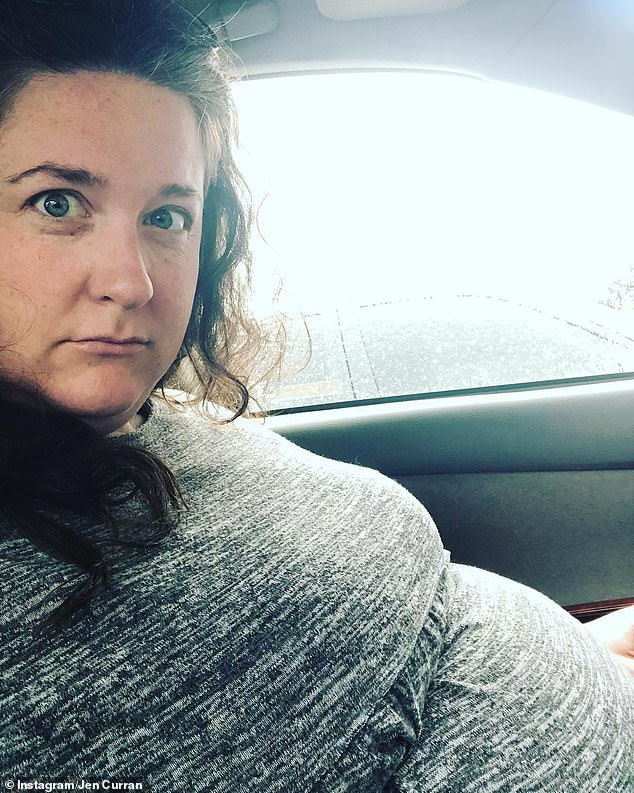 Symptom: When she met the kidney doctor, she learned the level of protein was even higher than it was during her pregnancy 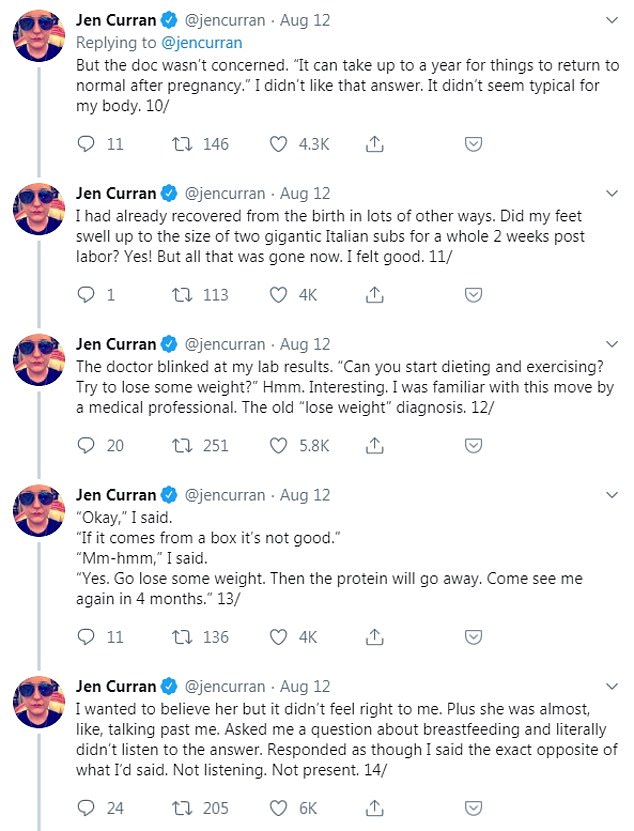 Brush off: Jen said the doctor told her to ‘lose weight’ and see her in four months

The doctor reminded her to not eat boxed, processed foods and assured her the level of protein will lower if she loses weight.

Jen said she long ago decided she didn’t want to worry about her weight anymore, and she spent a couple of weeks trying to figure out what to do

‘Even though part of me wanted to jump head first into that doctor’s weight loss prescription, I knew in my gut something else was wrong,’ she said.

The new mom eventually decided to get a second opinion and got a recommendation for a kidney doctor from her OBGYN.

‘The NEW kidney doctor took one look at my lab tests and said, “This is not good. And there’s nothing diet or exercise can do to touch it.” I was surprised BUT ALSO NOT,’ Jen recalled.

‘She was clearly concerned. She told me we needed to biopsy my kidneys. And I hoped for the best.’ 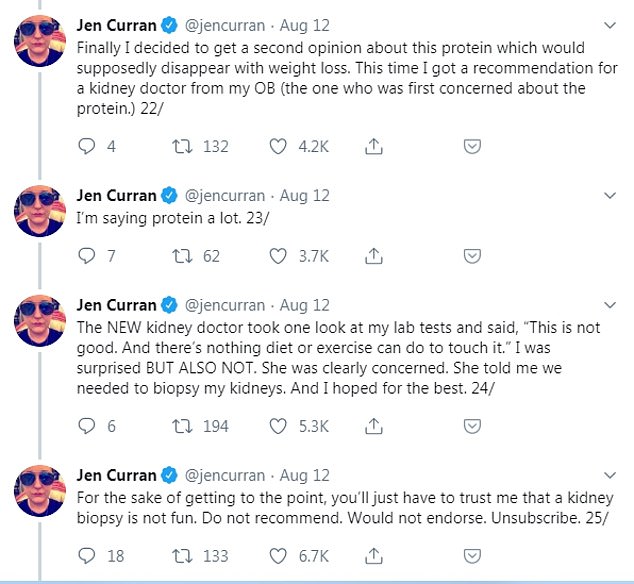 Concern: When Jen went to get a second opinion, her new kidney doctor told her neither diet nor exercise would lower her protein level 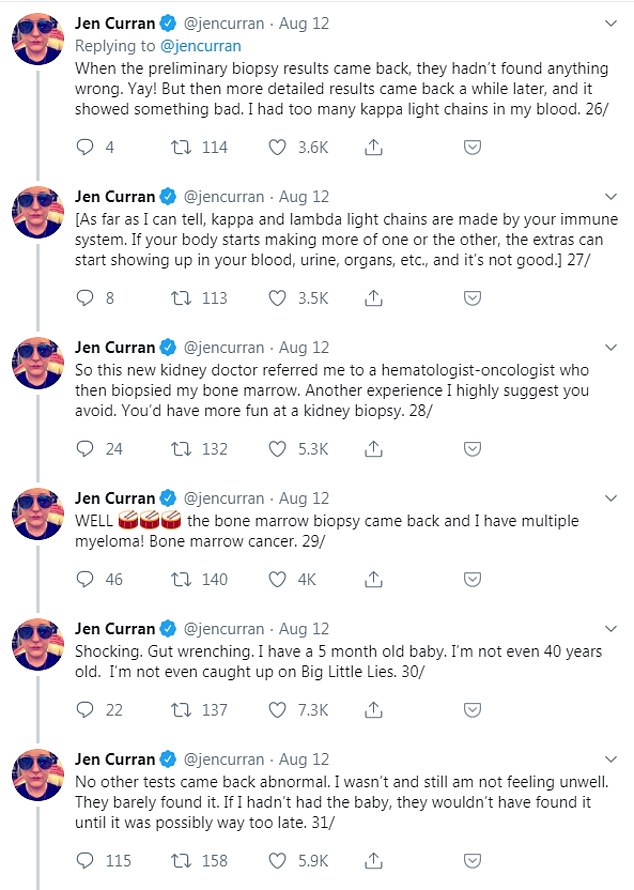 Shocking: The new mom was eventually diagnosed with a rare bone marrow cancer

After the preliminary biopsy results indicated something was wrong, the new kidney doctor referred her to a hematologist-oncologist who then biopsied her bone marrow.

‘WELL the bone marrow biopsy came back and I have multiple myeloma! Bone marrow cancer,’ she explained. ‘Shocking. Gut wrenching. I have a 5 month old baby. I’m not even 40 years old. I’m not even caught up on Big Little Lies.’

Jen noted that she has been feeling fine and none of her other tests came back abnormal.

‘They barely found it. If I hadn’t had the baby, they wouldn’t have found it until it was possibly way too late,’ she said.

‘And if I hadn’t gotten a second opinion? Duh. I’ll already be weeks into chemo by the time the followup with that first kidney doctor rolls around. And who knows how much longer it would have taken her to diagnose me?’

Jen said her story is a reminder that people must trust their instincts when it comes to their health. 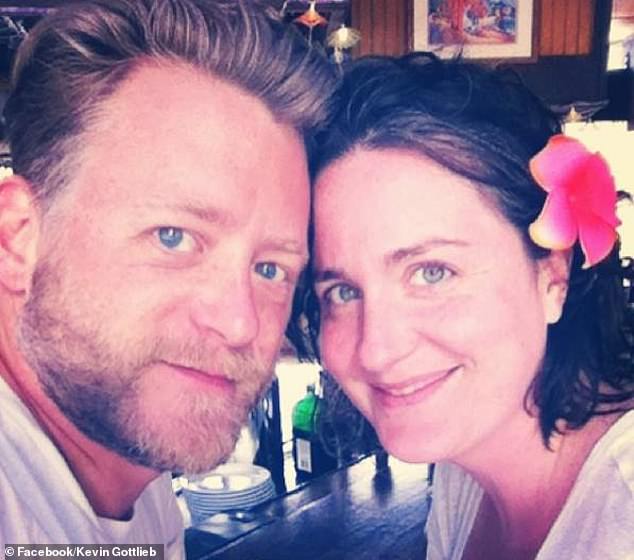 No symptoms: Jen (pictured with her husband Kevin) noted that she has been feeling fine and none of her other tests came back abnormal 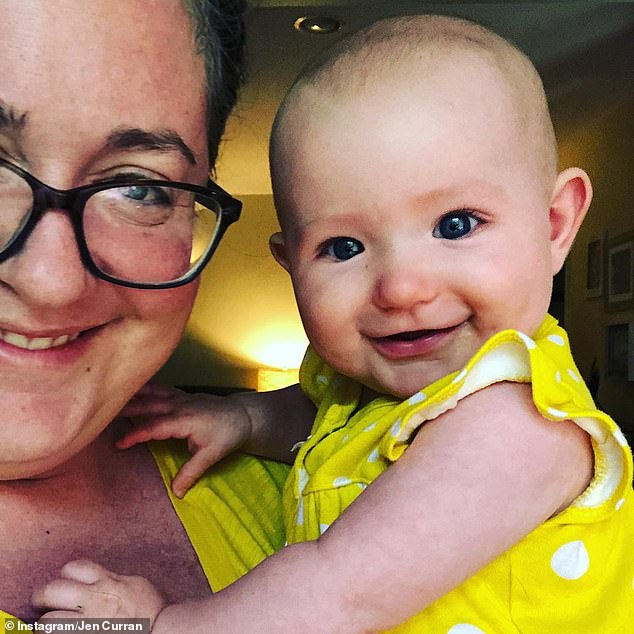 Fighting for her life: ‘If I hadn’t had the baby, they wouldn’t have found it until it was possibly way too late,’ said Jen, who started chemotherapy on Tuesday

‘Lose weight if you want to. But if you think something is seriously wrong with your body, and a doctor tells you weight loss is the key to fixing it, get a goddamn second opinion,’ she said.

‘Also, advocate for yourself. Get to know your body, trust your body, and listen to your instincts. And don’t be intimidated to question your doctor! This last one has been really hard for me but I’m getting better at it all the time.’

Jen and her husband Kevin are both freelancers and pay for their health insurance out of pocket. Their friends started a GoFundMe page for her to help cover her medical costs in July, and in less than a month, she has received more than $43,000 in donations.

The mom started chemotherapy on Tuesday and doctors are optimistic that remission is probable. While seeking treatment, Jen continues to speak out about the importance of advocating for one’s health.

‘It’s ridiculous that this kind of fatphobia is still happening on doctors offices 2019. I have been through far too much with my weight and my health so far to be shy about this or pretend like it isn’t happening,’ she told Yahoo Lifestyle.

‘I also shared it because I want women especially to trust themselves and not give an eff who looks at them sideways. That kind of courage might just save your life.’