A new spray-on ceramic claims to be ‘harder than sand’ and provide more coverage for stealth jets and bombers.

A team at North Carolina University designed the material to address limitations of current polymer skins that peel off craft, revealing the plane to enemy radar scans.

The innovation is still in early stages, but lab testing showed the new ceramic material can also absorb more than 90 percent of the energy from radar – current materials only absorb up to 80 percent.

The ceramic skin could help the infamous F-22, which has been plagued by problems including its stealth paint peeling off.

Because traditional materials are so fragile, aerospace engineers design fighter jets to protect the extra layer, and it usually impacts the craft’s speed.

However, the new ceramic skin will eliminate constraints and be applied in just one or two days to a stealth craft.

Lockheed Martin’s F-22 (pictured) is so stealthy that it appears like the size of a bumblebee on a radar screen, but the polymer skin that shields jets is fragile and eventually peels away

The first stealth aircraft, dubbed HAVE Blue, was developed in the 1970s and took its first flight in 1977.

This craft paved the way for the first combat purpose stealth, Lockheed’s F-11 Nighthawk, in 1983, which was used during Operation Just Cause in Panama, and since then, military personnel and scientists have been working on new innovations to prefect the technology – which has resulted in the infamous F-22.

However, the US Air Force announced it is looking to cut its fleet of fighter jets from seven to four which could spell the end for the F-22 Raptor stealth fighter.

The F-22 is so stealthy that it appears like the size of a bumblebee on a radar screen, but the polymer skin that shields jets is fragile and eventually peels away . 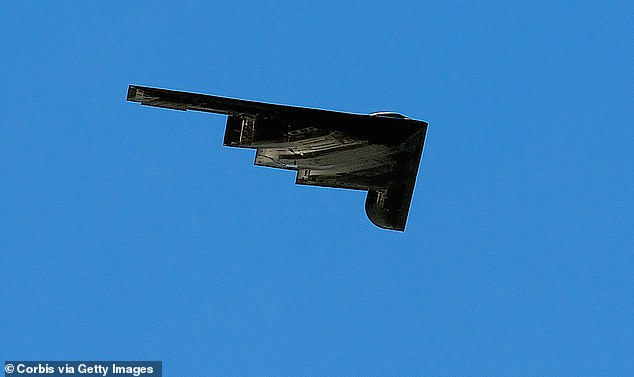 A team at North Carolina University designed a spray-on ceramic that is ‘harder than sand’ when it sets and can withstand all the elements that degrade current polymer skin. The new ceramic could make the Northrop Grumman B-2 Spirit Stealth bomber even stronger than it is now

Despite only spending 16 years in service and costing $150million the F-22 has been hit by an increasing number of repairs.

Current stealth aircraft are coated in in radar-absorbent polymers, which absorb 70 to 80 percent of the energy from radar.

Although it does not make the craft truly invisible, the material provides it with someone invisibility, but it also comes with limitations.

The polymers are very fragile and when exposed to the elements, like salt and moisture, the material begins to degrade or even peel off.

They also decompose if exposed to temperatures above 482F, which occurs around the wing’s edge and rear of the plane.

Chengying ‘Cheryl’ Xu, whose research team at NC State is leading the project, took all the limitations into consideration to develop a solution that can be applied to any craft.

The final product is a spray-on ceramic that is water-resistant and ‘harder than sand’ – meaning it can withstand harsh conditions.

The new material can also retain its radar-absorbent characteristics at temperatures as high as 3272F or as low as -148F.

The innovation is still in early stages, but lab testing showed the new ceramic material can also absorb more than 90 percent of the energy from radar – current materials only absorb up to 80 percent. Pictured is a A B-2 Spirit refueling in midair

According to the press release, a liquid ceramic precursor is sprayed onto the surface of the aircraft. And as the liquid precursor is exposed to ambient air, it undergoes a series of chemical reactions and is converted to the solid ceramic material.

And Xu says the entire process take one to two days to complete.

‘We recently secured funding from the Air Force Office of Scientific Research that will allow us to produce and test much larger samples, so that’s what we’re working on now,’ Xu says.

‘Ultimately, we are hoping to work with industry partners to scale this up and begin work on the next generation of stealth aircraft.’