More young Americans are getting tattoos than ever before, starting as young as eight years old, according to a new report.

In the report, published today, the AAP urges tattoo artists and piercers that teens and young people need to be screened for mental health concerns, and made aware that unsanitary piercing and tattooing can lead to infections like HIV and hepatitis. 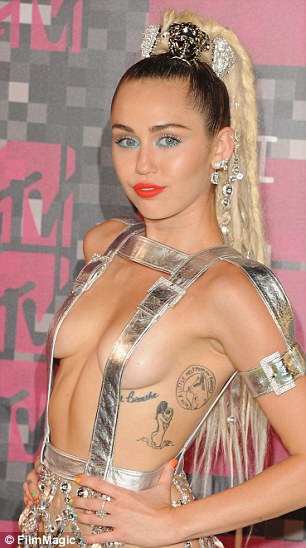 Justin Bieber (left), now 23, got his first tattoo when he was 16 and now sports 56, including one full sleeve and one half-sleeve. Miley Cyrus got her first tattoo, script on her ribs that says ‘Just Breathe’ (pictured, right) when she was 17, and now, at 24, has almost caught up to Justin with 54 tattoos

In one study referenced by the AAP, 10 percent of surveyed high school students said that they had one or more tattoos. Most of those students said they got their tattoos in the ninth grade.

Even as tattoos become common among everyone from young celebrities – like Justin Bieber, now 23, who got his first tattoo at 16, or Miley Cyrus whose first was at 17 – to C-suite executives, the AAP still advises that getting inked could be a turn-off to employers.

The AAP reported that 39 percent of people still thought that tattooed employees ‘reflected poorly’ on their employers, even as recently as 2014.

What’s more, 76 percent of people surveyed thought that having tattoos or piercings hurt their chances of getting a job.

Highly-desirable employer Google is known for being ‘tattoo-friendly’ workplace. Some companies, like cosmetics-maker Lush, even encourage tattoos and piercings as expressions of their employees ‘authentic selves,’ Brynn Diaz, a talent resource team manager for Lush North America told CBS.

According to the AAP’s guidance, 24 percent of people still see those with tattoos and piercings as more likely to do something ‘deviant.’ 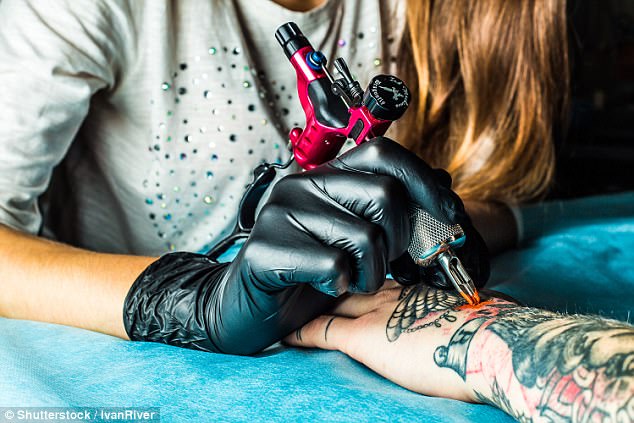 Tattoos are more common than ever, including among millennials but the American Academy of Pediatrics warns that tattoos in visible places like the hands could still make employers think twice about hiring someone

Though this is down from 29 percent in 2008, 40 percent of people also think that the wider acceptance of tattoos is a change for the worse.

This perception could be related to the historic association between tattoos and piercings and high-risk behaviors like alcohol and drug abuse, violence and suicide.

Recently, scientific data has shown a weaker link between these behaviors and tattooing and piercing. The AAP still cautions that pediatricians and parents should evaluate the mental health of young people considering body modification, or any life decision with long-lasting repercussions.

The AAP made a point to distinguish between body modifications like tattooing, piercing and even some scarification, and nonsuicidal self-injury (NSSI).

Between 14 and 24 percent of adolescents engage in self harm, according to the AAP. ‘Intention is the most important differentiator’ between body modification and self-harm ‘and can be discerned with careful clinical interviewing,’ the AAP said in its guidance.

Unlike NSSI, which is usually done for a feeling of ‘relief,’ most adults with tattoos reported that their ink made them feel sexier (30 percent). Others said that their tattoos made them feel attractive, strong, spiritual or athletic. Eighty-six percent of that same group said they had never regretting getting a tattoo.

Nevertheless, regrets happen, and the AAP cautions that ‘adolescents may overestimate the effectiveness of tattoo removal,’ which is expensive, time-consuming, and can result in its own scarring or burning (when used improperly).

The guidance even notes that one 29-year-old woman had a tattoo removed using the most commonly used ‘Q-switched’ laser method and was so displeased with the result that she had a new tattoo placed over the removal site.

The best advice the AAP has for pediatricians is to make sure that children and adolescents talk to a parent, guardian or trusted adult about getting the risks and repercussions of getting tattoos or piercings, and how to identify a safe, sanity place to have the body modification done.

According to the AAP, most states have regulations making it illegal for a minor to get either a tattoo or piercing without the consent of a parent or guardian. Of those, 12 require a parent to be present when a minor is being tattooed.

A few states outlaw the tattooing of minors altogether, such as Georgia, where local news channel 11 Alive reported an Atlanta mother was recently arrested after a teacher spotted a ‘Jesus loves’ tattoo on her 12-year-old daughter.

Stories like this are exactly why the AAP want pediatricians and parents to have its comprehensive guidance on tattoos.

The AAP notes that there data on the rates of infections and other complications from tattoos is rather slim, underscoring the need to for parents and pediatricians to be attentive.