Yet another image of Canadian Prime Minister Justin Trudeau in blackface at the 2001 Arabian Nights party – this time in color – has emerged just in time for the Canadian Federal Election.

The photo, released on Sunday by Canadian Proud, shows the liberal icon in a turban and robe, with his tongue sticking out. The world leader has also covered his face with dark makeup.

The latest insensitive image of the Canadian Prime Minister, who has a checkered history of blackface, has been slammed as a national embarrassment and Trudeau branded a ‘clown’ by many online.

Others were quick to point out that Trudeau was not a kid but was 29 and a teacher when he attended the Arabian Nights even in 2001.

Photos of the event first emerged in 2019 – prompting outrage and an apology from Trudeau – but this is the first time a color image from the party has been released.

The release of the never-before-seen picture was timed for the biggest impact on Trudeau who has gambled on an early election in a bid to win a majority of seats in Parliament. Voting begins today and the opposition has been relentless in accusing Trudeau of calling an unnecessary early vote during the pandemic – two years before the deadline – for his own personal ambition

Now his opponents are quick to point to the embarrassment Trudeau has caused to his country through his racist exploits.

One night before the Canadian Federal Election, a new photo has emerged of the Canadian Prime Minister Justin Trudeau in blackface 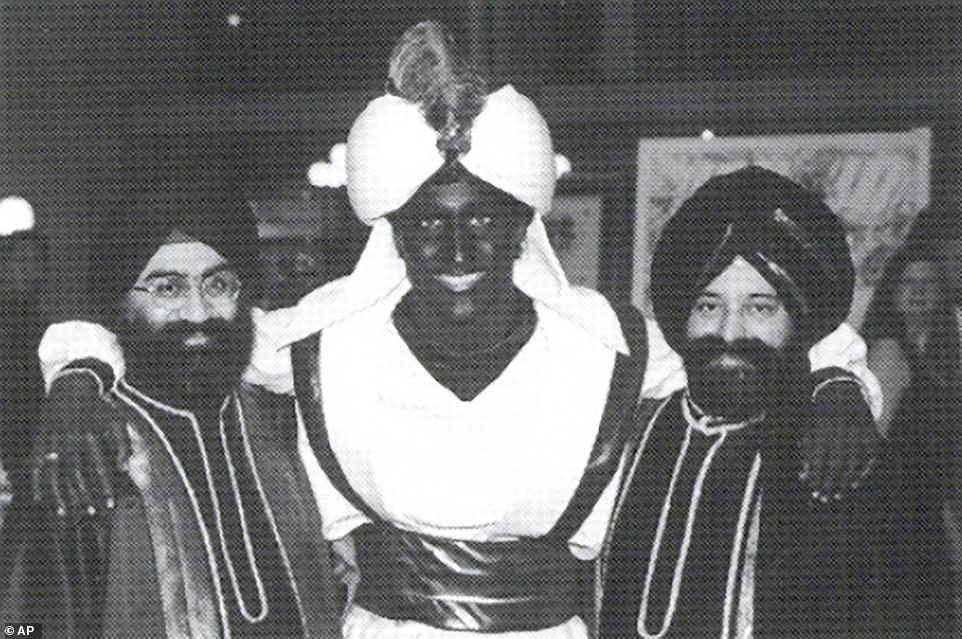 In 2019, similar pictures from the same event emerged online, but this is the first time this particular image has been released

‘I knew, even as a kid, that this type of behaviour was wrong. So, he was either completely ignorant or simply did not care. Terrible,’ Twitter user Jason Rose wrote.

‘Canada about to become the laughing stock of the world by re-electing this Clown face. Can we be that stupid?!’ fellow Twitter user Henry Rasmussen added.

Many simply called for everyone to ‘vote him out’.

Yet many on the other side of the fence, appeared to be supporting the disgraced politician.

Several pointed out that the photo was 20 years old and that Trudeau had apologized when other images from the event emerged in 2019.

But conservatives were quick to point out hypocrisy, saying that liberals would be quick to ‘cancel’ anyone on the right for the same behavior. 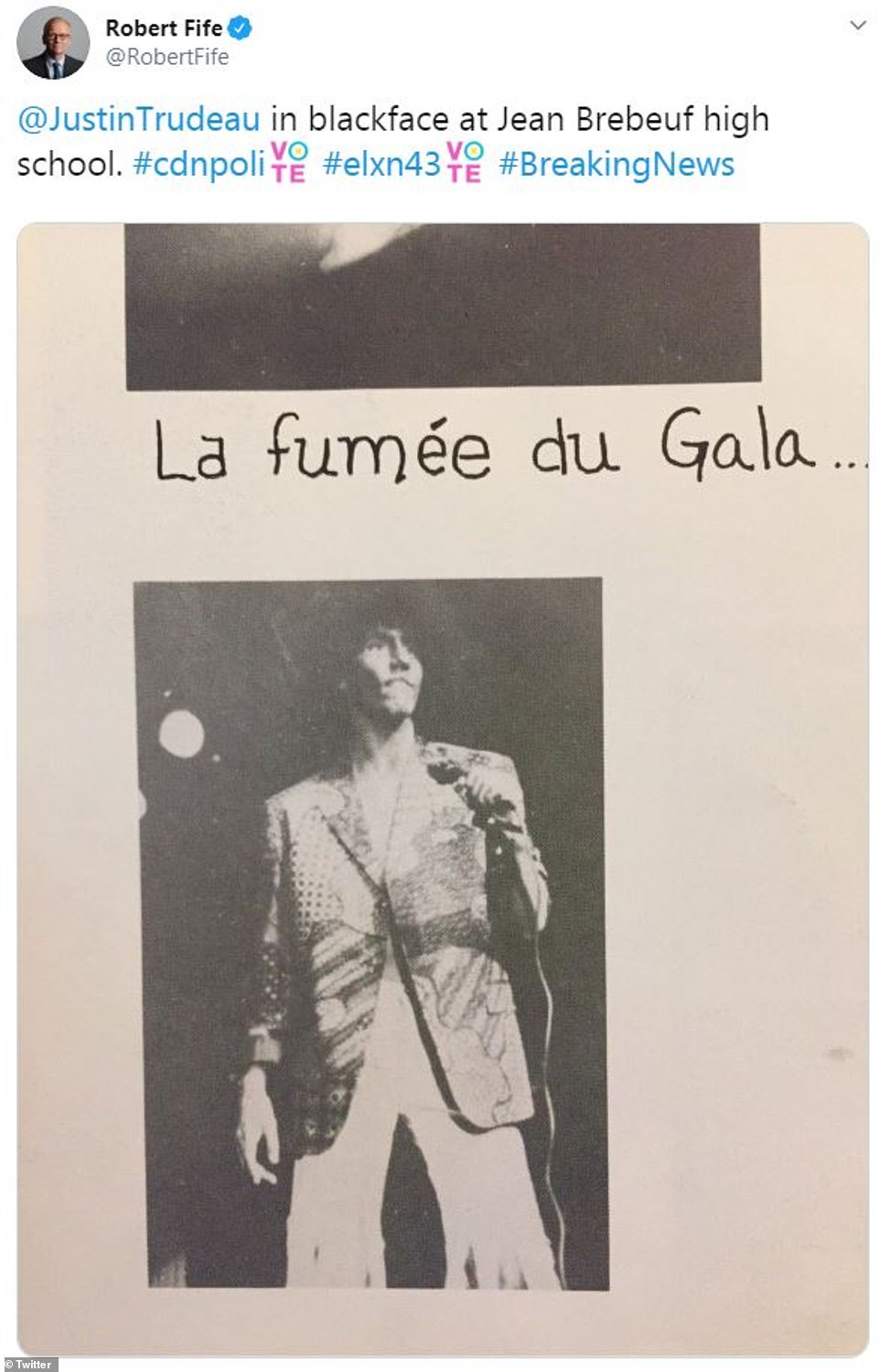 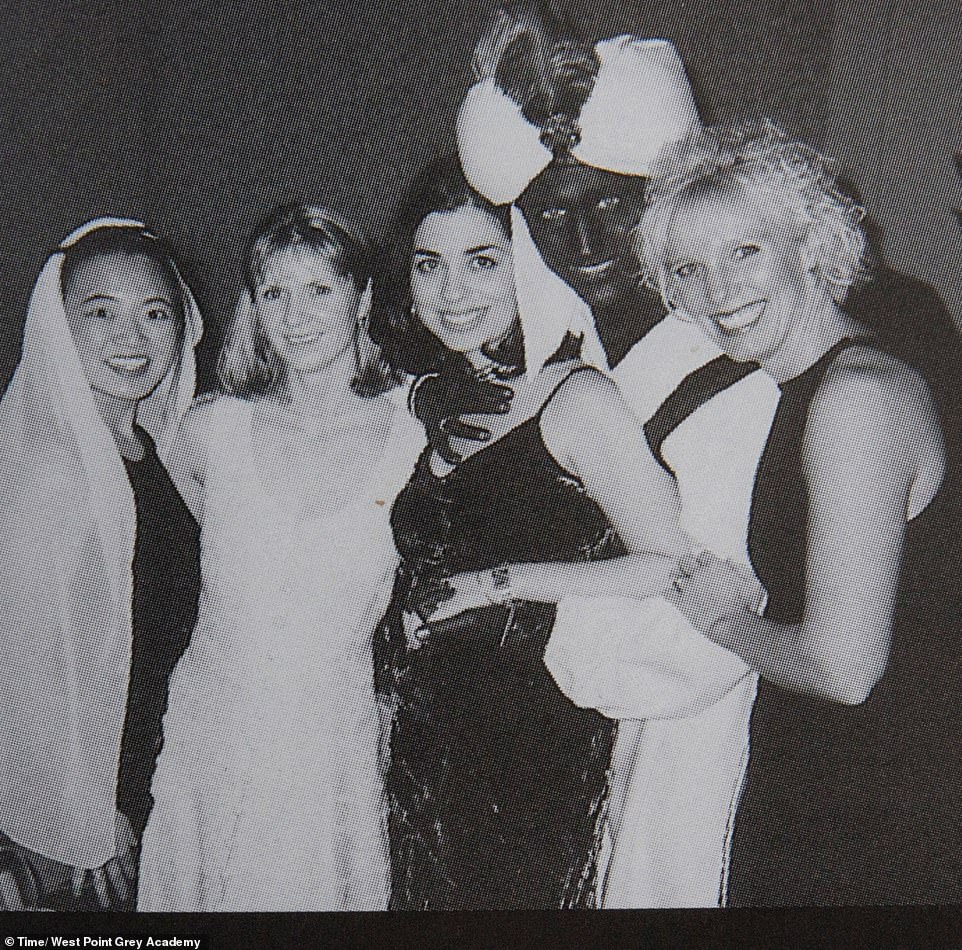 Several black and white images of the Arabian Nights party emerged in 2019, including this yearbook photo 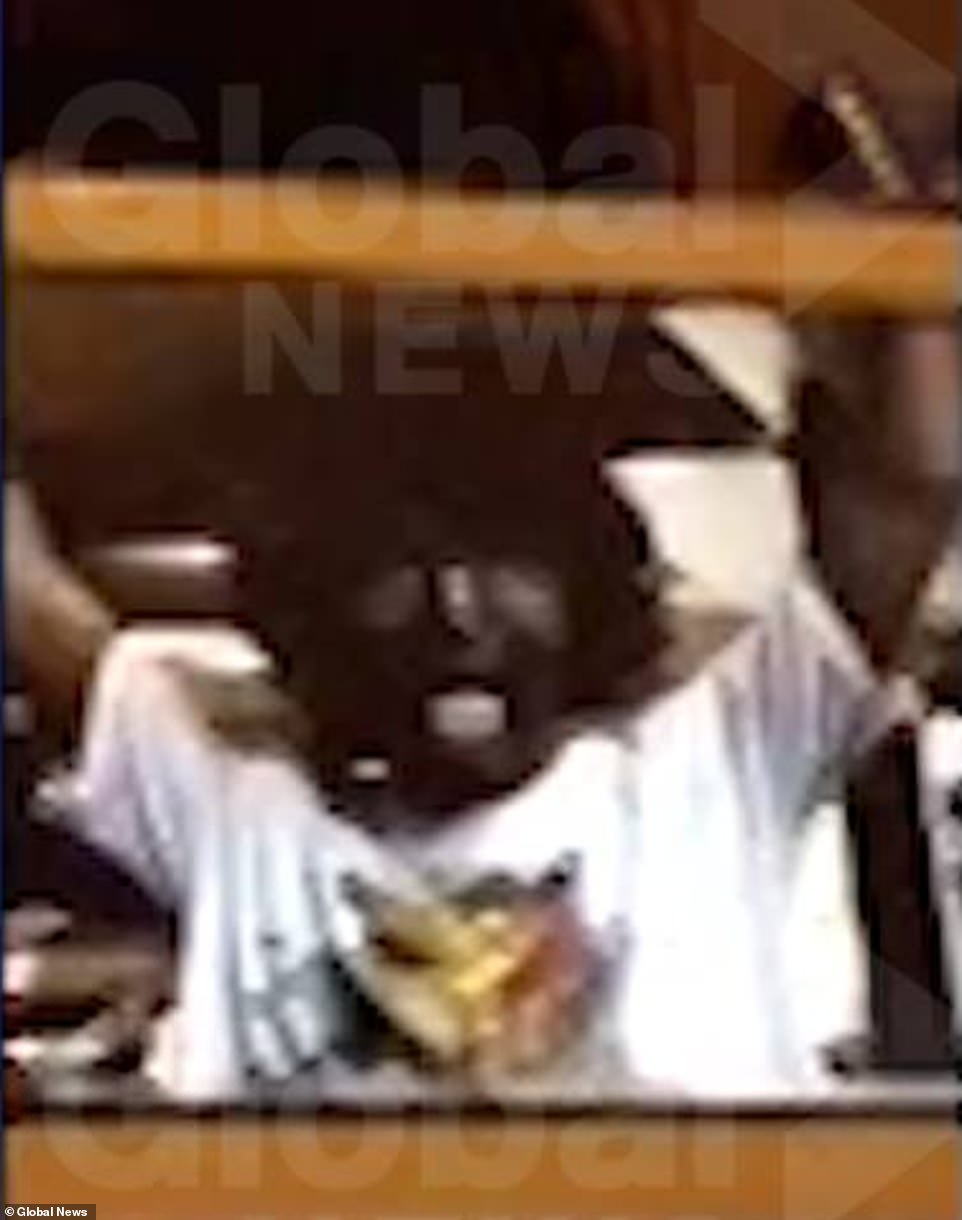 An undated video shows Trudeau in blackface yet again, this time in a white t-shirt and what appears to be a wig

‘It’s equally weird seeing people apologize for blatant racism–especially people who would not allow the same tolerance to anyone else. For me, that sort of thing is a red line -regardless of affiliation,’ Dylan Barrons tweeted.

Another user added: ‘I am not a Conservative, but everyone time a Justin Trudeau photo of him wearing #blackface comes out, I just can’t understand how he was never held accountable by the party, party members and supporters.’

Trudeau has not yet commented on the latest picture.

But in September 2019, he apologized for wearing blackface at the Arabian Nights party and also referred to a high school incident where he dressed up as Harry Belafonte to sing the Jamaican song Day-O. A video also emerged around this time of Trudeau in blackface at a separate event.

Trudeau said his behavior had been ‘unacceptable’ and that he has enjoyed ‘layers of privilege’ in his life. He also  said he took ‘full responsibility’ for the scandal.

He asked for forgiveness but would not confirm that those three incidents were the only times in his life he had worn blackface.

‘It wasn’t a good idea, it was a terrible idea. It was something that minimizes and takes advantage of a reality that I have not had to live with – of being discriminated against, being marginalized for the color of my skin.

‘I come from a place of privilege. I have to recognize that I let a lot of people down and I stand here today to reflect on that and ask for forgiveness.’

In the earliest photograph, Trudeau is dressed up as Jamaican singer Harry Belafonte to sing Day-O, a Jamaican song, at Jean Brebeuf High School at a talent show. He graduated from the school in the early 1990s.

The video, which is undated but was given to Global News, shows him with a black face and raising his arms and sticking his tongue out while dressed in a white t-shirt and jeans.

In a press conference held on his campaign plane, he acknowledged that the Arabian Nights photo was racist and said he should have known better. 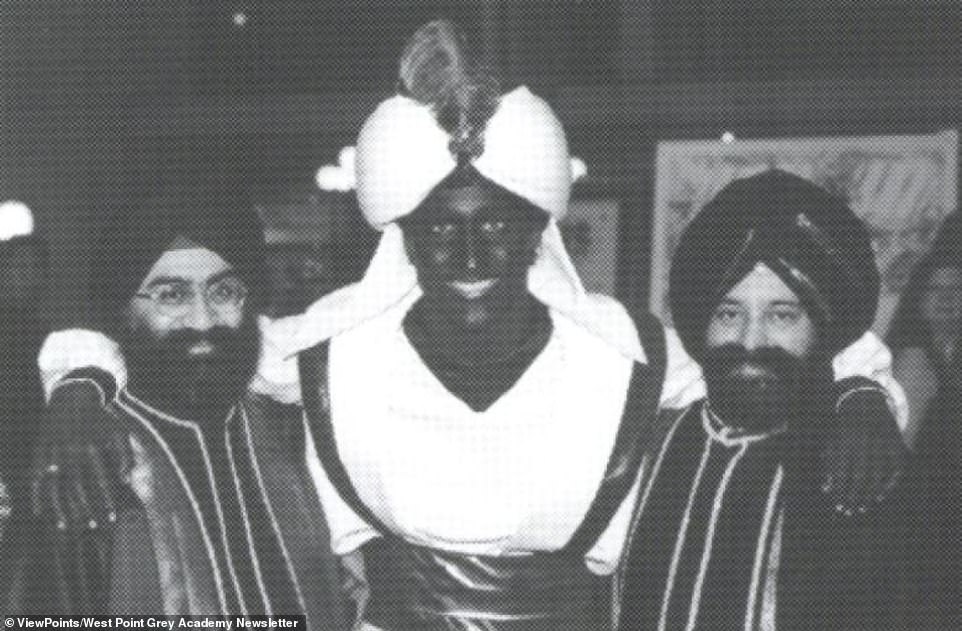 Trudeau admitted that while he did not think it was racist at the time, he knows now that it was. He had painted his arms and hands as well as his face

Trudeau said the brownface photo was taken at an end of year gala where the theme was Arabian Nights and he dressed up in an Aladdin costume. 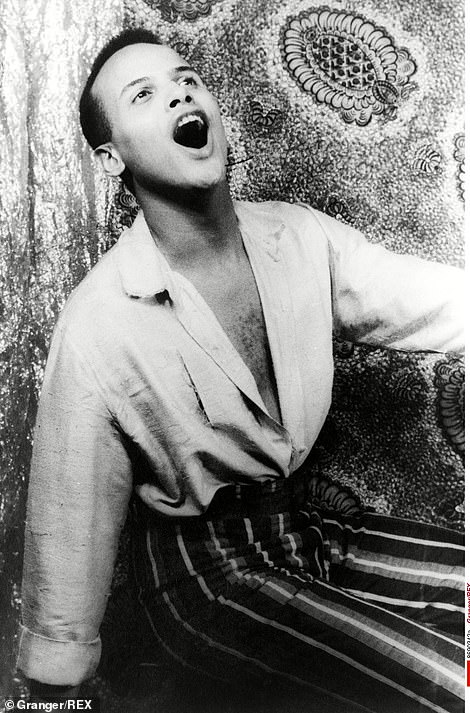 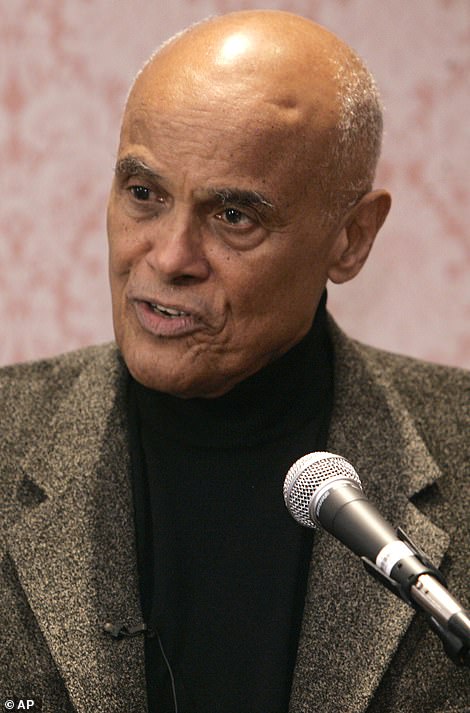 Trudeau was impersonating singer Harry Belafonte in the high school performance. Belafonte, dubbed the King of Calypso, is shown, left, in 1954, two years before he released Day-O, and right, in 2006 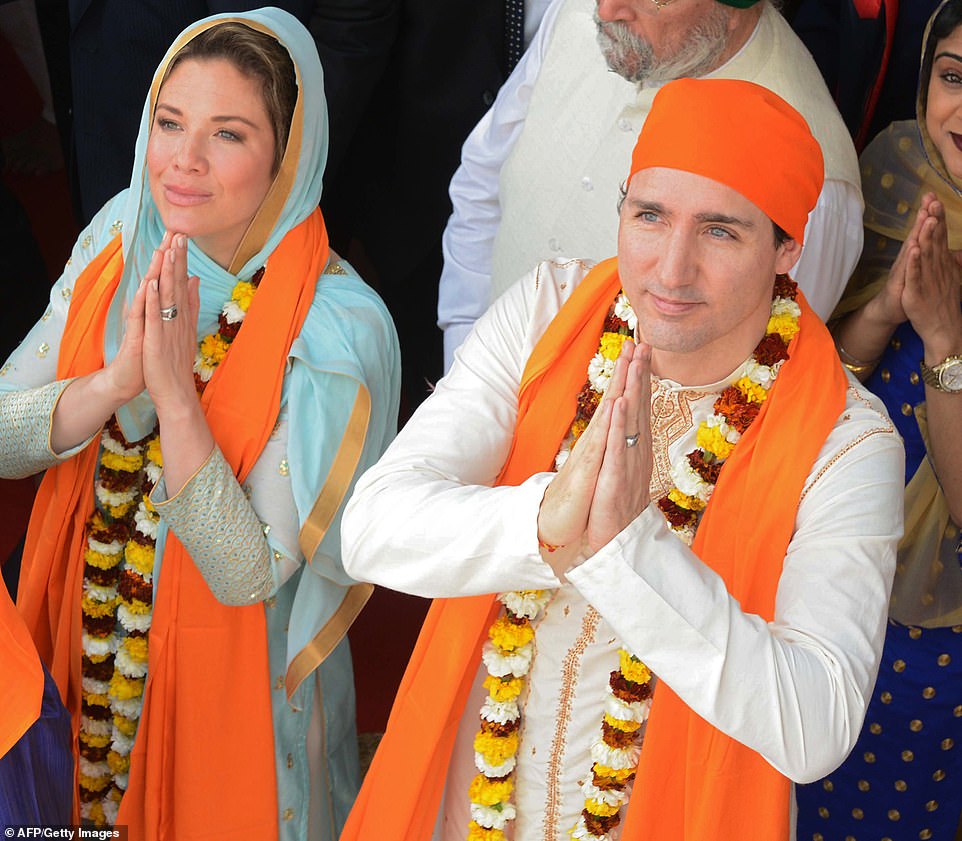 Trudeau acknowledged that he had ‘always been more enthusiastic about costumes than is sometimes appropriate’. He is pictured with his wife Sophie during a trip to India in 2018

Trudeau, who has been in power since 2015, is facing a tough re-election battle.

Not so innocent after all: A complete timeline of Canadian Prime Minister Justin Trudeau’s scandals, from ethics investigations to blackface

Canada’s Prime Minister first found himself in hot water with the ethics commissioner when it was discovered he’d broken conflict of interest rules by vacationing at the Aga Khan’s private island during Christmas in 2017.

The Aga Khan’s foundation is registered to lobby the government. In addition, Trudeau also traveled in the Aga Khan’s private helicopter. 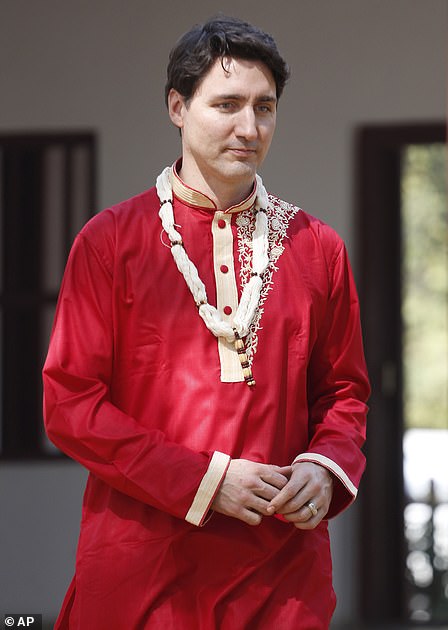 While this is not an ethics scandal, Trudeau found himself being mocked after he proudly dressed in various local costumes during a trip to India in February of 2018.

Also during the trip, Trudeau’s wife, Sophie, was photographed with a man named Jaspal Atwal at a reception in Mumbai.

In 1986, Atwal was convicted of the attempted murder of an Indian politician, which led many to question why he was at the reception in the first place.

In 2018, news emerged that Trudeau allegedly ‘groped’ a young woman at a music festival in British Columbia 18 years ago. When a reporter brought up the allegations at a steel and aluminum workers at Regina in western Canada, Trudeau  said he did not recall the event.

‘I remember that day in Creston well. It was an Avalanche Foundation event to support avalanche safety. I had a good day that day. I don’t remember any negative interactions that day at all,’ Trudeau, who has a ‘no tolerance’ for sexual harassment, told reporters.

Trudeau later apologized to the woman in question ‘in the moment,’ despite commenting that he was confident he ‘did not act inappropriately.

In September 2019, photos emerged of Trudeau wearing blackface at the Arabian Nights party in 2001 and also referred to a high school incident where he dressed up as Harry Belafonte to sing the Jamaican song Day-O. A video also emerged around this time of Trudeau in blackface at a separate event.

Trudeau said his behavior had been ‘unacceptable’ and that he has enjoyed ‘layers of privilege’ in his life. He also  said he took ‘full responsibility’ for the scandal. 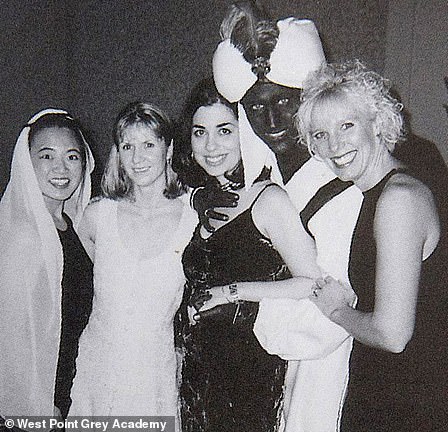 In June 2020, the Canadian government announced the WE Charity would run a new grant program for students hit hard by the COVID-19 pandemic.

It later emerged that Trudeau had personal connections to WE and was involved in the decision-making process, without recusing himself.