New poll puts Biden 14 points clear of Trump: Democrat now leads among men as well as women and among crucial over 65 voters

A New York Times/Siena College poll that dropped Wednesday shows that Biden currently has the support of 50 per cent of registered voters, while Trump sits at 36 per cent.

President Trump is down by 14 points nationally in a new poll by The New York Times and Siena College, where 50 per cent of voters said they had a ‘very unfavorable’ view of the president 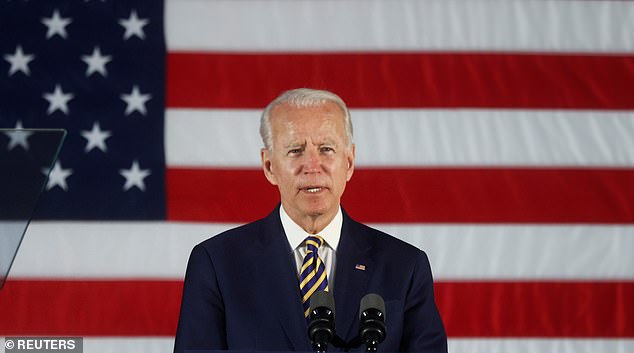 Joe Biden, the Democrats’ presumptive nominee, is beating Trump among the typical Democrat-friendly voting blocs, as well as groups the president won in 2016

About the same percentage of Americans view each candidate very favorably – with 27 pe cent saying that of Trump and 26 per cent believing that about Biden, the Democrats’ presumptive nominee.

Similar to how the demographic groups broke down in last week’s Rasmussen poll, Biden does well with groups who typically vote Democratic.

He has a 74-point advantage among black voters and a 39-point lead among Latinos.

He wins women voters of all races by 22 points.

But Biden is starting to challenge Trump with groups who generally tilt Republican.

Voters ages 50 to 64 only prefer Trump by 1 point, while Biden leads by 2 points among voters age 65 and up.

Trump also has lost his edge among men, who now favor Biden by 3 points.

In 2016, Trump beat Hillary Clinton because he had an 11-point advantage with male voters.

And he had an advantage with voters over 50 years old, according to data from the Pew Research Center.

A glimmer of good news for Trump is that he still gets a thumbs up on his handling of the economy, with 50 per cent of voters giving him a favorable rating, compared with 45 per cent who don’t.