Drivers using American fuel prices would be able to travel the length of Britain for half the price of filling up here, new data shows.

The 874-mile trip from Land’s End to John o’Groats would cost you more than £120 using UK forecourt prices of 131p a litre in a Toyota IQ doing 57.6 miles per gallon, double what it would cost you at American unleaded prices.

The cost of travelling some of the world’s most iconic journeys using different global petrol rates have been revealed in new research.

UK pump prices are at their highest in four years and could rise further, but how much would it cost you to travel some of the world’s most iconic routes on that

Last month, This is Money published our 2018 annual petrol prices index, showing that even the highest pump prices for four years weren’t enough to land Britain in the top 10.

Now a new study shows that UK drivers wouldn’t make it a fifth of the way along the trip from Scotland to Cornwall on £20 of petrol.

Drivers paying American prices of 64p a litre would be able to drive nearly 290 miles before needing to fill up.

The data from Warranty Direct also shows that a driver paying Hong Kong prices – which we revealed were the world’s highest at 165p a litre – would spend £157 filling up over the course of the trip. 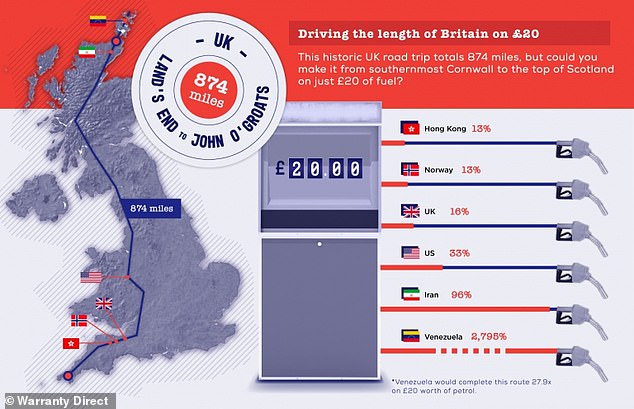 Drivers using US petrol prices would be able to make it 33% of the way along the iconic trip of Land’s End to John O’Groats on £20 of petrol. It would cost UK drivers twice as much.

The US performed well in the study – the country has pump prices cheap enough to land it in the bottom 25 per cent worldwide.

US drivers pay less than a quarter of the fuel tax their UK counterparts pay, meaning they benefit from much lower prices.

In Britain, currently the most expensive part of the price of both unleaded and diesel is fuel duty, which is 57.95p per litre.

VAT makes up another 22p slice, with the product costing roughly 48p and the retailer typically taking a 5p a litre cut. 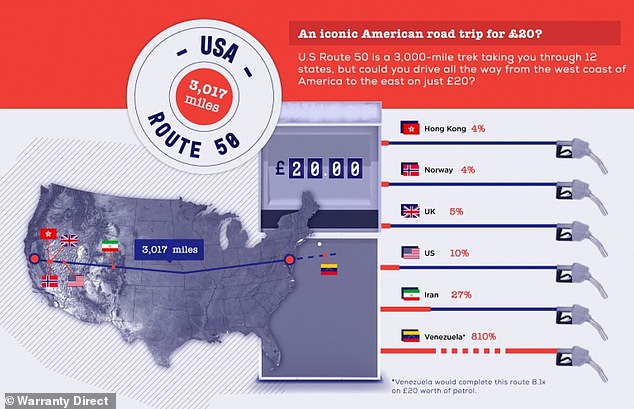 It would cost UK drivers more than £400 to travel the 3,000 mile US Route 50 using petrol prices here

US drivers could drive the 3,000 mile long Route 50 from Sacramento, California, to Ocean City, Maryland, on just £205 worth of fuel.

Driving the same route on UK petrol prices would cost more than double.

In our index, Norway boasted the third most expensive forecourt prices in the world after Hong Kong and Iceland, at 157p a litre.

The two Nordic countries are also subject to fuel taxes, with unleaded in both nations featuring a petrol tax and carbon tax.

In fact, £20 would only enable Norwegian drivers to complete 13 per cent of the Land’s End to John o’Groats route.

Native drivers taking on an equivalent iconic route in Norway – Trondheim to Sandefjord – would also only make it 39 per cent of the distance on £20 of fuel.

At the opposite end of the scale, drivers using Venezuelan prices, which are the cheapest in the world, could complete the trip from Land’s End to John o’Groats on just 72p. 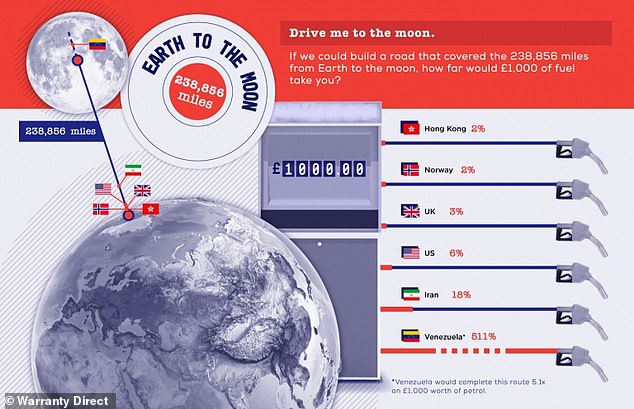 Out of this world: If we built a road from earth to the moon, you could drive the length of it five times on Venezuelan petrol prices.

Drivers from the South American country could also travel the length of the longest drivable distance on Earth, from Sagres, Portugal to Khasan, Russia, on just £10 worth of fuel and still have over a quarter of a tank left.

The gap between the cheapest and most expensive countries is laid bare when you consider the 238,856 mile journey from earth to the moon.

On £1,000 worth of fuel, a driver from Hong Kong would only make it two per cent of the way, whereas a driver using Venezuelan petrol prices could make the trip five times before needing to fill up again, the tongue-in-cheek research shows.

According to GlobalPetrolPrices.com, Venezuela has the cheapest pump prices in the world, at an average of £0.01 per litre. That comes with a few caveats though.

The first is that Venezuela is an oil-producing country, with oil accounting for 98 per cent of its exports.

It exported nearly 1.6million barrels a day last year, according to OPEC.

As a result, it has for decades subsidised fuel prices, although that could be set to change.

That’s because the South American country is currently in the midst of severe hyperinflation.

For the price of a 50 cent (roughly 38p) cup of coffee, which costs 2.2million Venezuelan Bolivars, you could fill up a small SUV 9,000 times.

In a bid to try and get a hold on the country’s economic crisis, President Nicolas Maduro announced at the end of last month that fuel prices would rise to international levels.