Babies are born with equal intelligence no matter what their class or race is, research has found.

The idea that race or class determines brain power has been dealt a killer blow after a seven-year global study found babies can thrive regardless of their background.

All children born to healthy parents in clean environments develop at approximately the same rate, with genes accounting for as little as 10 per cent of the process.

The research, by the University of Oxford, used data from more than a thousand children worldwide to try and settle the nature versus nurture debate for good.

‘Receiving decent medical care and nutrition is the key.’

The INTERGROWTH-21st Project, which took seven years to complete, tracked nearly 60,000 mothers and babies in the womb, then followed more than 1,300 to age two.

The first 24 months of a baby’s life are believed to be some of the most crucial in their brain development, with the organ reaching two-thirds of its adult weight.

INTERGROWTH-21st is the world’s first study of its scope and size and produces hard-hitting evidence in the nature versus nurture debate, its researchers say.

Mothers who were in good health and living in clean urban areas were selected from all over the world, from countries including Italy, India and Brazil.

A study by the University of Queensland in Australia, published in 2013, claimed as much as 40 per cent of a child’s intelligence could come from their parents.

The finding from what was then the largest ever study of childhood intelligence used genetic data and IQ scores of thousands of six to 18-year-olds from the UK, Netherlands, Australia and the US.

They found that between 20 and 40 per cent of the variation in childhood IQ was due to genetic factors.

And previous research had suggested this figure was even higher – 40 to 50 per cent.

Dr Beben Benyamin, from the University of Queensland, told ABC: ‘This estimate from DNA information is lower than family studies, but it is consistent with the conclusion childhood intelligence is heritable.’

Results showed that as well as the speed of physical growth being approximately equal regardless of race, so were babies’ behaviour and brain development.

Conditions found to affect brain development were the baby’s living conditions, the food they ate and the education they were given.

The study is expected to help settle the debate over the role of genetics in determining intelligence and flies in the face of controversial assumptions about differences between races.

James Watson, a pioneer of understanding DNA and now 90 years old, was last week shunned by the Cold Spring Harbour Laboratory in New York because his comments on race.

Mr Watson, who discovered double-helix structure of DNA with Francis Crick, has suggested genes cause differences in the average IQ test scores of black and white people.

Oxford’s Professor Kennedy added: ‘There’s still a substantial body of opinion out there in both the scientific and lay communities who genuinely believe that intelligence is predominantly determined by genes and the environment that you’re living in, and that your parents and grandparents were living in, and their nutritional and health status are not relevant.

‘Well, that’s clearly not the case.’

Professor Kennedy and Professor Jose Villar, who co-authored the INTERGROWTH-21st project – hope the data will be used by global health officials.

They believe it marks such a milestone it should be used by the World Health Organization alongside its baby growth charts. 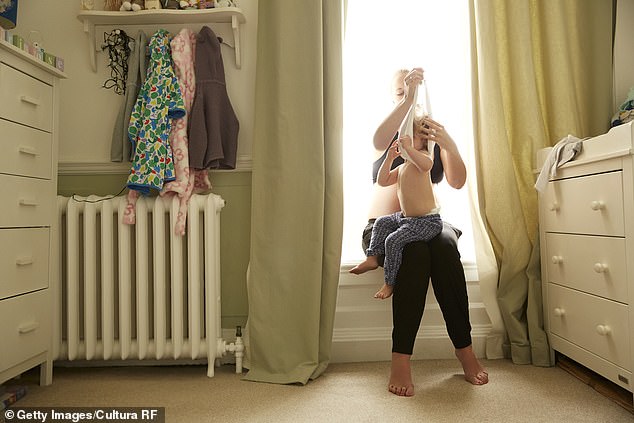 The study tracked the physical and intellectual development of infants from around the world, with 1,300 of them remaining involved in the research for two years – the first two years of a baby’s life are believed to be the fastest period of brain development (stock image)