St Francis Xavier’s College in Hamilton East, in Newcastle, has been closed for deep cleaning after a student came into contact with a COVID-19 positive person and visited the premises between August 3 and 5.

One confirmed case has been linked to the Apollo Restaurant, in Sydney’s Potts Point, while another was a person who visited Victoria and is now in isolation.

Authorities are still scrambling to identify the source of infection after a woman in her 60s returned a positive result.

Thursday’s tally raises the state total of confirmed COVID-19 cases to 3,653 with 52 deaths.

Included in the new COVID-19 cases reported in NSW on Thursday are another two Sydney men in their 20s who attended several venues while potentially infectious.

One dined the Jambo Jambo African restaurant in Glebe on July 31 from 7pm to 8.30pm and anyone who attended the restaurant at that time should self-isolate and get tested.

The man also visited several other inner-Sydney venues between Friday and Sunday but patrons at these places are classified as casual contacts.

The other attended Penrith Plaza, Master Hot Pot in Canley Vale and BBQ City Buffet in Bankstown on August 1 and those who were at those venues should be alert for symptoms.

The man is a close contact of a previously reported case associated with the Mounties club cluster.

NSW Premier Gladys Berejiklian is also urging younger adults to rein in their social lives after a COVID-positive man attended a football match and six Newcastle pubs over the weekend.

The man in his 20s is a close contact of a Newcastle teenager whose diagnosis shut down his high school and sent two football teams into self-isolation.

‘We are on a knife-edge and we are about halfway through what is a really critical period,’ Ms Berejiklian told Triple M radio on Thursday.

‘To the young people, try and modify the number of places that you go to.’ 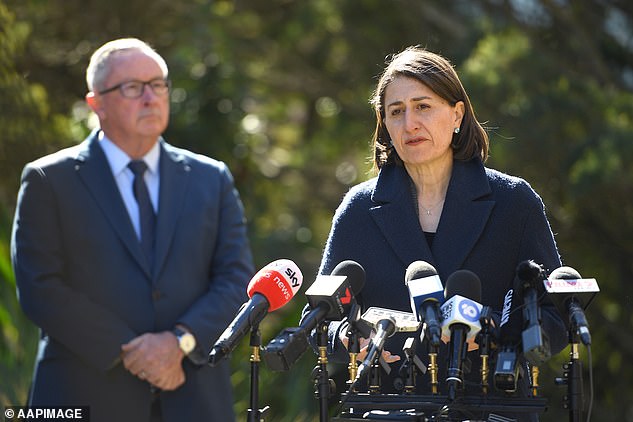 NSW Health wants anyone who attended those venues between specific times to immediately self-isolate for 14 days from the day they attended and get tested.

The man also visited the Greenroof Bar and Restaurant in Hamilton, the Queens Wharf Hotel and Sushi Revolution in Hamilton, and was among 2570 spectators at the Newcastle Jets-Western United match on Sunday at McDonald Jones Stadium.

Anyone who visited those venues on those dates is considered a casual contact.

The Australian Medical Association, meanwhile, has encouraged NSW residents to wear a mask in public at all times despite current NSW government guidelines.

The NSW government currently recommends mask use where social distancing is impossible, as well as for public-facing employees, religious worshippers and those who live near COVID-19 clusters.

The elderly and those at high health risk should also wear masks.

‘The government has been asking the community to do the right thing and while many people have responded, infections persist and NSW is struggling to return to the previous environment where it had no community transmission,’ AMA NSW President Dr Danielle McMullen said in a statement on Friday.

Dr McMullen also said the AMA would continue to lobby government for stronger restrictions on indoor gatherings in NSW.