New South Wales has recorded 110 local Covid-19 cases overnight – but 43 of them were out in the community for the entire time they were infectious.

Premier Gladys Berejiklian said the Fairfield local government area in Sydney’s south-west was still seeing ‘consistently high’ levels of virus transmission as she urged the city’s residents to stay at home during their strict stay-at-home lockdown.

The 110 new locally-acquired cases came from 84,000 tests in the 24 hours to 8pm on Tuesday night. Thirteen of the infections have yet to be linked to known cases.

Executive Director Health Protection NSW Dr Jeremy McAnulty said though transmission was also increasing in the city’s west as the epicentre of the highly-contagious Delta outbreak threatens to shift again.

Victoria earlier on Wednesday announced the state had detected another 22 local cases of Covid-19 as the state enters its first day of an extended seven-day lockdown to stem the spread of its latest Covid outbreak.

The state’s Department of Health said the new community cases – detected from 59,355 tests conducted on Tuesday – are all linked to known outbreaks.

Wednesday’s 22 new locally-acquired cases is the highest daily increase in Victoria since September during the state’s deadly second wave of Covid-19 infections.

Medical staff are seen administering COVID-19 tests at a drive through testing site at Albert Park Lake in Melbourne. Victoria earlier on Wednesday announced the state had detected another 22 local cases of Covid-19

The number of cases that were out in the community while infectious will be announced by health officials later on Wednesday morning.

Victorian Premier Daniel Andrews has meanwhile shared an alarming map which showed how hundreds of residents across the southern state had already been directly exposed to the virus.

‘This Delta variant is moving faster than anything our public health experts have seen before,’ the state leader wrote in a Facebook post on Monday evening.

‘Ninety-six active cases, around 18,000 people in quarantine, and hundreds of exposure sites from Phillip Island to the Mallee – all in just over a week.’

The country town of Orange in regional NSW has also been thrown into a week long lockdown after the virus spread from a pet food driver making a delivery from Greater Sydney to a local.

Along with Orange, South Australians have been ordered to stay at home for seven days while in Victoria the state’s fifth lockdown has been extended for another week.

There are also now fears of an outbreak in Queensland after a woman tested positive having arrived from Melbourne.

The Hoey Moey pub in Coffs Harbour was exposed to Covid on Thursday July 15 between 3.55pm and 4.20pm, while initially only the bottle shop had been listed as an exposure site. 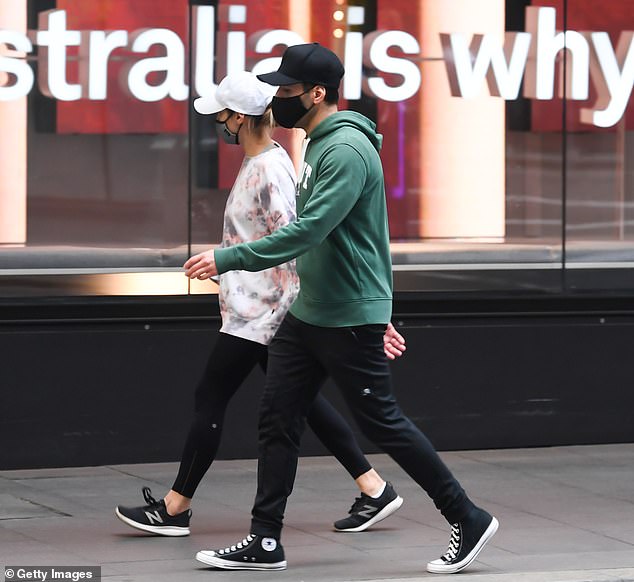 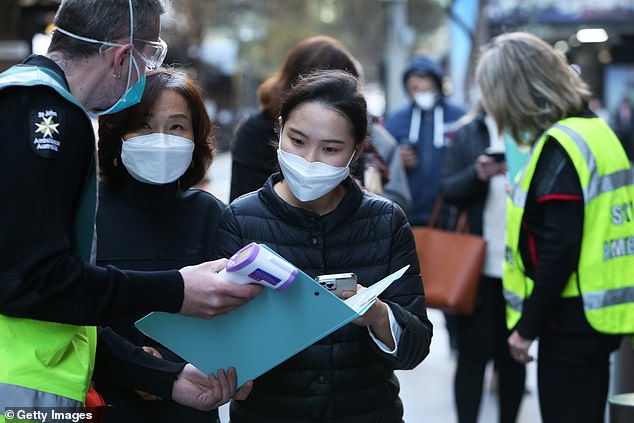 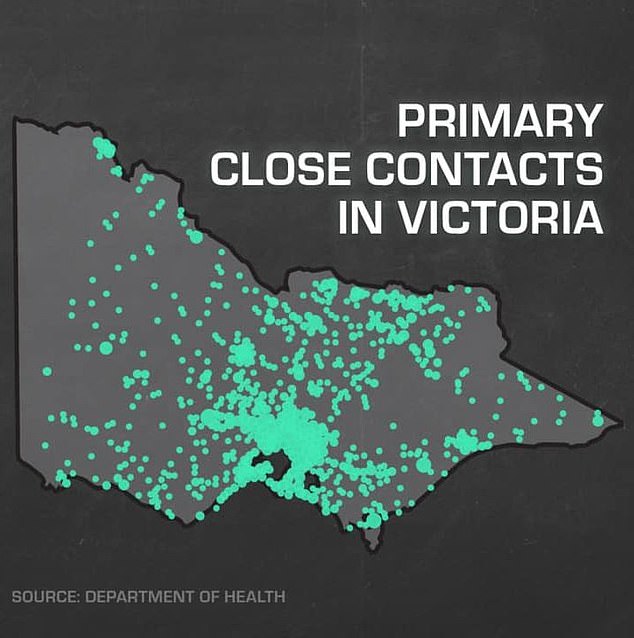 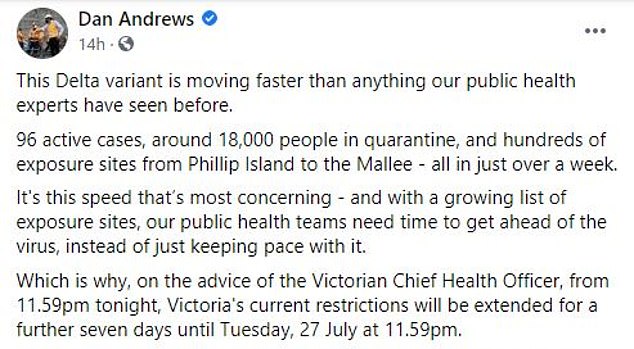 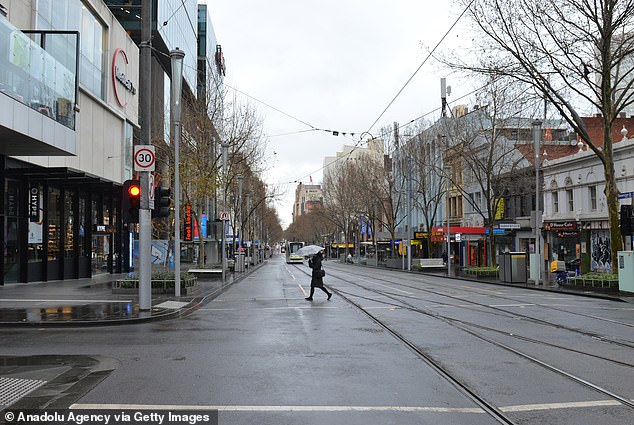 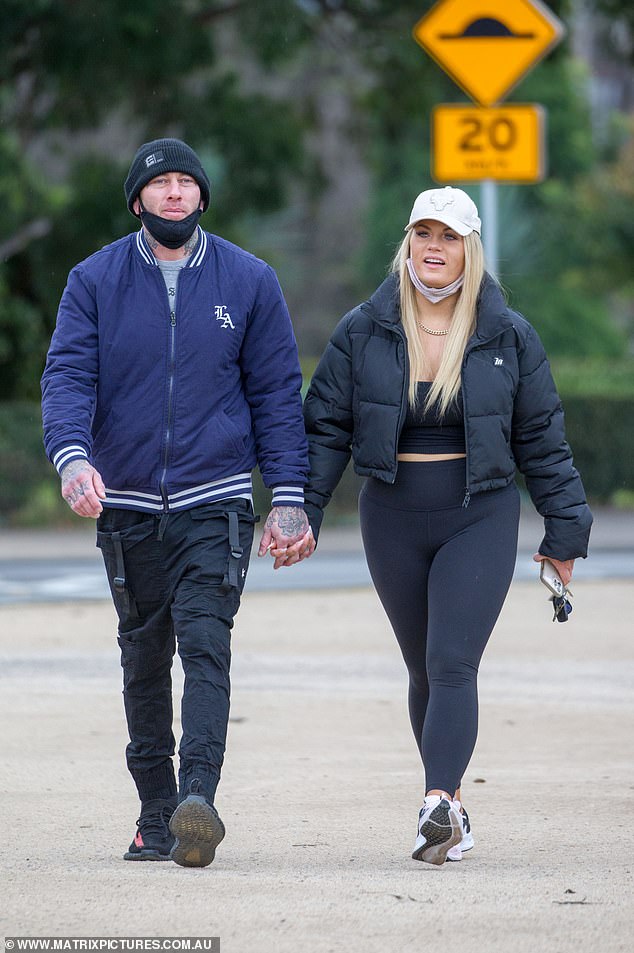 Pictured are pedestrians in Melbourne on Tuesday. Wednesday’s 22 new locally-acquired cases is the highest daily increase in Victoria since September 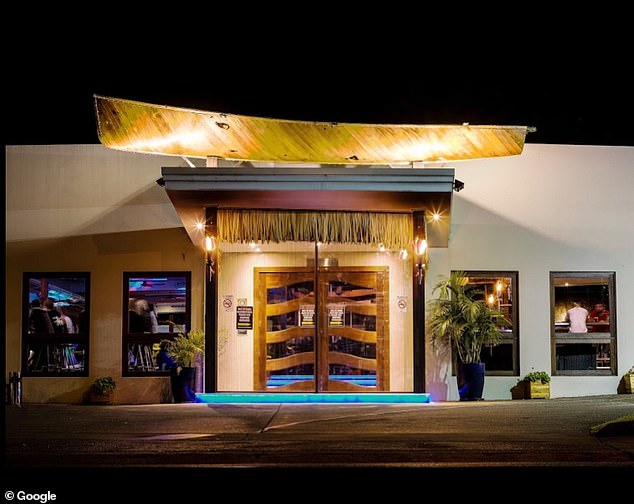 The Hoey Moey pub in Coffs Harbour (pictured) was exposed to Covid on Thursday July 15 between 3.55pm and 4.20pm, while initially only the bottle shop had been listed as an exposure site 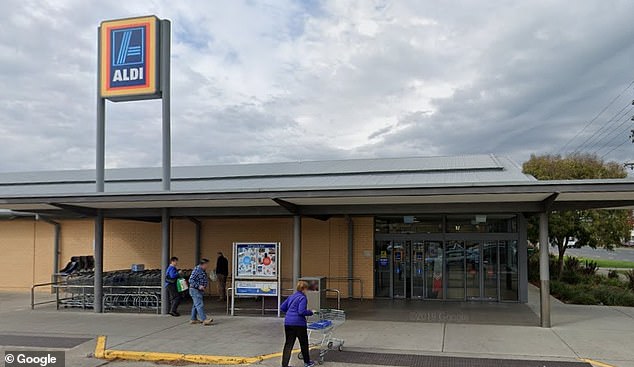 Several other venues were added to NSW Health’s relentlessly growing list on Tuesday night, including two Woolworths stores, one in Sydney’s Belrose and another in Chester Hill.

The new exposure sites in Victoria come after the state recorded 13 new infections on Tuesday.

The BR International Logistics warehouse in Derrimut in Melbourne’s west, is believed to have been exposed by an infected resident all day for a week.

Those who attended the venue anytime from July 13 to July 19 must isolate for 14 days from the day they were exposed, regardless of a Covid-19 test result. 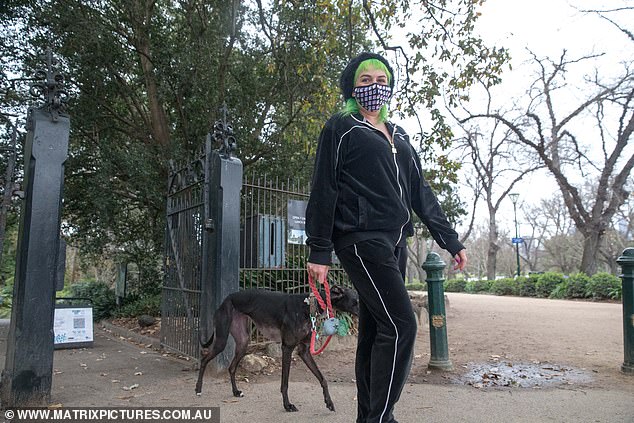 A woman is seen walking her dog in Melbourne on Tuesday. Victoria is in the midst of its fifth lockdown 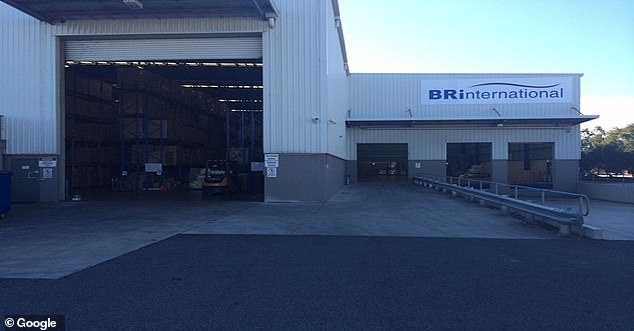 The BR International Logistics warehouse in Derrimut in Melbourne’s west, is believed to have been exposed by an infected resident all day over a period of seven consecutive days

Pop-up cafe and arts store Status Quo Pop-up in Richmond was exposed by an infected resident over four days between July 14 and July 17.

Those at the store between 8am to 3pm on any of those days are required to get a Covid test and isolate until a negative result.

Meanwhile the Aldi in Beaconsfield has been put on alert for shoppers who attended the supermarket on July 17 between 1:30pm and 3:00pm.

Victoria’s lockdown was scheduled to end at midnight but has been extended for another seven days until midnight July 27.

AUSTRALIA’S LATEST COVID OUTBREAKS: WHAT YOU NEED TO KNOW

*The state recorded 78 new Covid-19 cases overnight, with 27 out in the community while infectious and 29 yet to be linked to known clusters.

*Of the new cases, 52 (66 per cent) were found in south-west Sydney – with health officials finding 11 cases in both the city’s west and south-east.

*Greater Sydney has entered its fourth week of hard lockdown, with the outbreak of new infections at 1,418 since June 16.

*Officials confirmed a woman in her 50s had died from the virus in Sydney’s south-west, the mother of two infected removalists.

*Victoria has extended its lockdown for a week after 13 new cases in the state were announced on Tuesday.

*The lockdown was scheduled to end at midnight but has been extended for another seven days until midnight July 27.

*Nine of the 13 new cases were isolating for all their infectious period, with 12 linked to the Delta outbreak in NSW and one under investigation.

*Victorian Premier Daniel Andrews has reinstated a hard border with NSW and ordered a temporary pause on the issuing of ‘red zone’ permits.

*From midnight on Tuesday, Victorians returning home from north of the border must apply for a new permit.

*The only ones allowed to enter will be authorised workers and those who successfully apply for a compassionate exemption.

*Almost 49,500 Victorians came forward for testing on Monday while another 17,083 rolled up their sleeves for the Covid-19 jab.

*The state has recorded a mystery case of Covid-19, a fully vaccinated woman had tested positive despite no known links to other clusters.

*The woman, aged in her 20s, flew into the Sunshine Coast from Melbourne on July 13.

*The case is unrelated to any of the existing outbreaks – with authorities confirming she had been infectious in the community for three days.

*Premier Steven Marshall announced the entire state would go into lockdown from 6pm on Tuesday for the next seven days.

*The call was made after two new locally acquired cases of Covid overnight, bringing the total number of infections in the state to five.

*Residents only have five lawful reasons for residents to leave home, for essential supplies, to exercise, for medical care, for care or compassionate reasons or essential work.

*Construction sites across the state will shut down for seven days and schools will transition to online learning from Thursday. 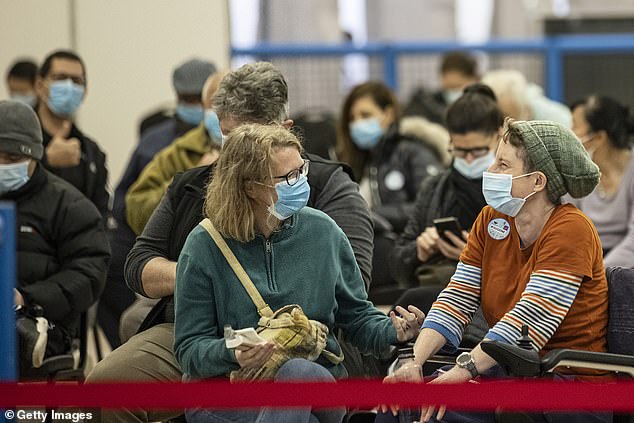 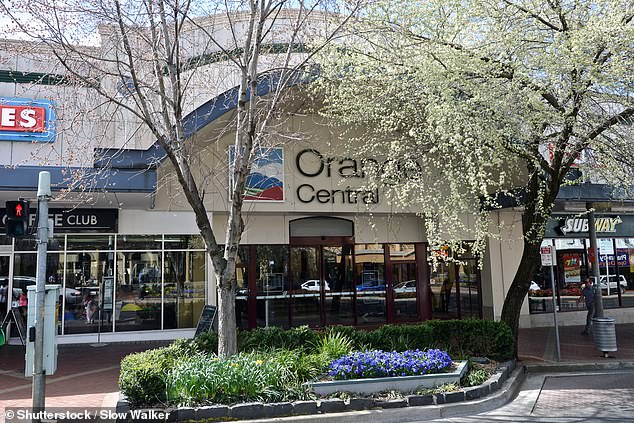 This is Victoria’s fifth lockdown since the pandemic hit Australia’s shores early last year and the third one so far in 2021.

‘We want to avoid a long, lengthy challenging lockdown where you lose control of cases, we have avoided that, but we need more time,’ Mr Andrews said.

He also reinstated a hard border with NSW and ordered a temporary pause on the issuing of ‘red zone’ permits.

Almost a third of Victoria’s locally-acquired coronavirus cases can be traced back to a fan who attended an AFL game, a Euro 2020 viewing party, and a rugby match while unknowingly infectious.

That man caught the virus from a resident of a Maribyrnong apartment complex who got it from unmasked Sydney removalists, then went on to spread it to friends and family.

Twelve of Tuesday’s cases are linked to the outbreaks of the Indian Delta variant in the state, which originated in NSW, and one case is under investigation. 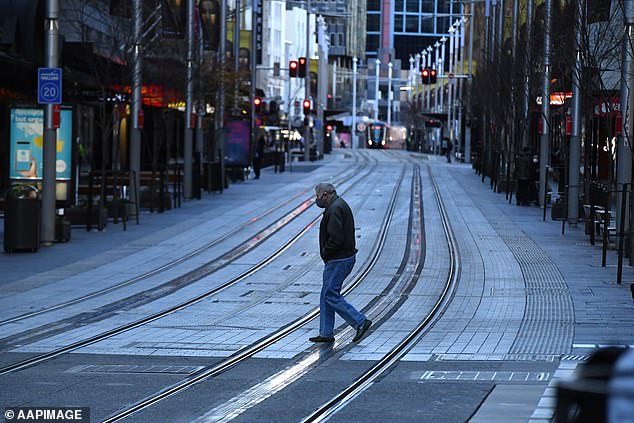 There appears to be no end in sight for Sydney’s lockdown as the city enters its fourth week of tough restrictions (pictured, an eerily quiet George Street on Tuesday) 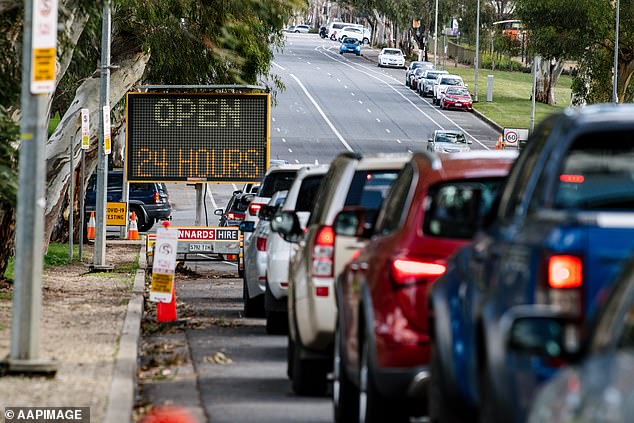 South Australia has also entered a seven day lockdown after a total of five infections were recorded (pictured, testing in Adelaide on Tuesday)

But an extra week of lockdown in Victoria is unlikely to be enough to quash an outbreak of the Indian Delta coronavirus variant, an epidemiologist says.

Based on modelling by Monash University and his own progression data, University of South Australia academic Adrian Esterman believes local Covid-19 cases will not drop to zero by the end of Victoria’s seven-day lockdown extension.

‘You’ve got at least another week and potentially two or three weeks,’ the veteran epidemiologist and biostatistician said.

Anyone who attended the following previously announced venues is now a close contact, and must get tested and isolate immediately for 14 days, regardless of the result

Belrose: Woolworths in Glenrose Shopping Village – Wednesday July 14, 10.30am – 11am

Anyone who attended the following venues is a close contact, and must get tested and isolate immediately for 14 days, regardless of the result

‘It takes as long to get down as it does to take off. I’m expecting (Monash University) modelling forecasts of at least four weeks is probably correct.’

Meanwhile NSW is grappling with outbreaks of the virus in both Sydney and regional parts of the state.

About 50,000 people in Orange, Blayney, and the Cabonne Shire Council in the NSW Central West were plunged into lockdown as of midnight on Tuesday, enduring the same restrictions as Sydneysiders.

Along with millions of people in Greater Sydney, locals in the regional area will only be allowed to leave their homes for essential reasons in an attempt to quash the outbreak.

Meanwhile, Dr Young has announced all of South Australia will be declared a hotspot from 1am Thursday, after the southern state ordered a seven-day lockdown with five cases found there.

From that time, anyone who has been to South Australia won’t be allowed to enter Queensland unless they are a returning Queensland resident, or have essential purpose exemptions, and all arrivals will have to quarantine for 14 days.

The entire state of SA was locked down as of 6pm on Tuesday with residents only allowed to leave their houses for five reasons.

These include for care and compassionate reasons, to exercise, for essential work, to get essential supplies, and for medical reasons.

South Australians starting their seven-day lockdown will only be allowed to travel a maximum of 2.5km away from their homes to exercise.

The rule is one of the toughest to be imposed amid the Covid-19 pandemic in Australia, with exercise also limited to just 90 minutes each day.

Anyone who attended the following venues is urged to get tested and isolate for 14 days from the exposure regardless of test results:

Anyone who attended the following venues must get tested and isolate until given a negative result: