New South Wales has recorded 20 new coronavirus cases, sparking fears the state could soon be forced back into lockdown.

The announcement comes after the state recorded an additional 18 cases on Sunday – biggest figure since 21 cases on April 29.

During a press conference on Monday, premier Gladys Berejiklian said all new cases had come from a known source.

She urged residents to remain vigilant with social distancing and to continue to self-isolate for 14 days if they are ordered to do do.

‘We are in pandemic and the next few weeks are critical,’ Ms Berejiklian said.

The spike in cases come as doctors and politicians call for the NSW government to consider harsher restrictions including a return to lockdown as the state’s outbreak grows.

Last week Ms Berejiklian said she would avoid a second lockdown ‘at all costs’ to protect jobs but fears are growing she may have little choice.

The Doherty Institute has estimated that the disease’s potential reproduction number is 1.09 in NSW, worse than Victoria’s figure of 0.92.

This means that each patient would give the virus to 1.09 people on average, causing the outbreak to grow by the day.

Paul Komesaroff, professor of health sciences at Monash University, said the virus could quickly get out of control in New South Wales as in Victoria where 363 new cases were recorded on Sunday.

‘Victoria’s example is a justification for concern,’ he told Daily Mail Australia.

‘There is a high level of community transmission which started from only a small number of cases. It shows how rapidly the virus can spread.’ 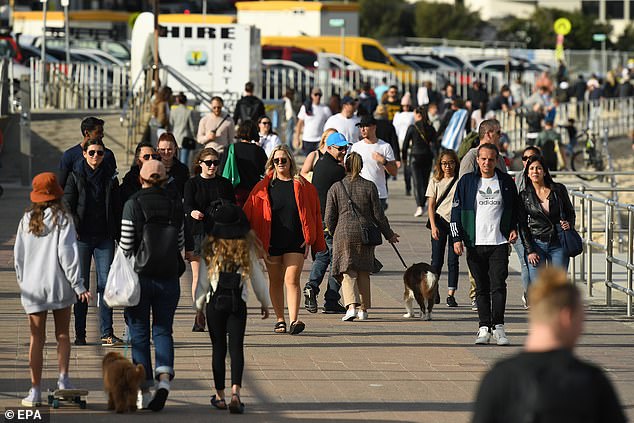 NSW must consider harsher restrictions including a return to lockdown as the state’s outbreak grows, doctors and politicians have said. Pictured: Bondi Beach on Sunday

‘Where there are outbreaks in certain areas, localised lockdowns would be appropriate,’ he said.

‘We have seen this strategy work in China and South Korea. It did not work in Melbourne because the lockdowns were brought in too late.’

Early this month the Victorian government shut down 12 Melbourne postcodes but locked down the whole city the following week because the virus had spread too far.

Professor Komesaroff said the downside of local shut downs is that they require ‘a high degree of militarisation’ including police road blocks on main roads.

A whole city shut down would be easier to enforce, he said.

Premier Berejiklian last week ruled out local shutdowns, saying: ‘It’s all or nothing.’ 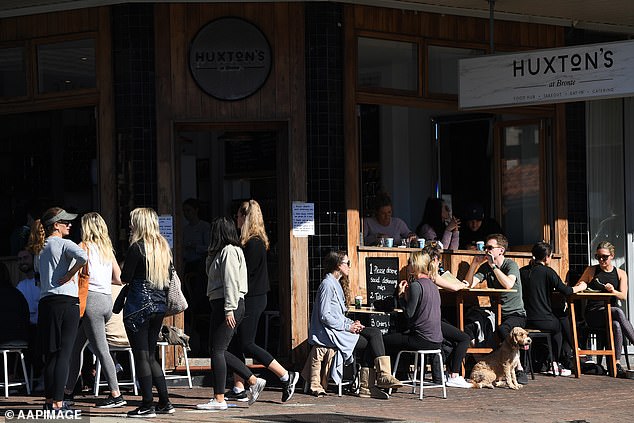 The Doherty Institute has estimated that the disease’s reproduction number in NSW is 1.28. Pictured: Diners at a cafe in Bronte in Sydney

‘Victoria has mandated masks in Melbourne to contain COVID – it’s time for NSW Government to detail our current stockpile and ensure supplies of PPE as we must be ready for anything,’ she said.

Professor Komesaroff said one option is to make masks compulsory in workplaces after Victorian law firms and abattoirs suffered outbreaks.

‘In Victoria transmission appears to be occurring in workplaces as people here are less careful,’ he said.

‘That’s a lesson that NSW should learn too. It could be that people need to wear masks at work.’