Scientists have discovered a new species of giant, plant-eating dinosaur that lived 200 million years ago.

The enormous herbivore has been named Ledumahadi mafube, which means ‘a giant thunderclap at dawn’ in Sesotho, one of South Africa’s 11 official languages.

The  beast was a relative of the Brontosaurus, and twice the size of a large African elephant, weighing 12 tonnes and standing around 13 feet (4m) tall at the hips.

Scientists say it was the largest land animal alive on Earth at the time and may have been an ‘evolutionary experiment’.

The enormous herbivore has been named Ledumahadi mafube (pictured), which means ‘a giant thunderclap at dawn’ in Sesotho, one of South Africa’s 11 official languages

Professor Choiniere said: ‘The name reflects the great size of the animal as well as the fact that its lineage appeared at the origins of sauropod dinosaurs.

‘It honours both the recent and ancient heritage of southern Africa.’

They estimate that the specimen was a fully grown adult when it died, with the team calculating lived to be round 14 years of age.

Scientists were able to establish the animal’s age accurately by looking at growth rings in the fossil’s bone tissue.

‘We can tell by looking at the fossilised bone microstructure that the animal grew rapidly to adulthood,’ Dr Jennifer Botha-Brink from the South African National Museum in Bloemfontein said.

‘Closely-spaced, annually deposited growth rings at the periphery show that the growth rate had decreased substantially by the time it died.’

Dr Botha-Brink said that indicates that the animal had reached adulthood by the time it died.

Researchers believe Ledumahadi mafube is one of the closest relatives of sauropod dinosaurs and presents an interesting transitional period in sauropod evolution. 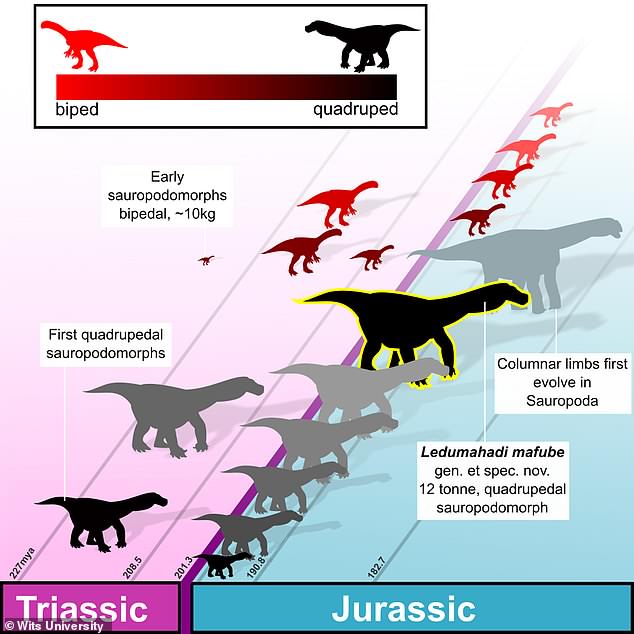 The research team say the fossil of the Ledumahadi mafube tells a fascinating story of its individual life history, geographic history of where it lived, and of the evolutionary history of sauropod dinosaurs as they went from bipedal to quadrupedal (pictured)

Sauropods are a group of dinosaurs which included the well-known Brontosaurus and other animals which weighed up to 60 tonnes.

All sauropods ate plants and stood on four legs, with a posture similar to modern elephants.

Ledumahadi evolved its giant size independently from sauropods, and although it stood on four legs, its forelimbs would have been more crouched.

That caused the scientific team to consider Ledumahadi as an evolutionary ‘experiment’ with giant body size.

Study lead author Dr Blair McPhee said: ‘The first thing that struck me about this animal is the incredible robustness of the limb bones. 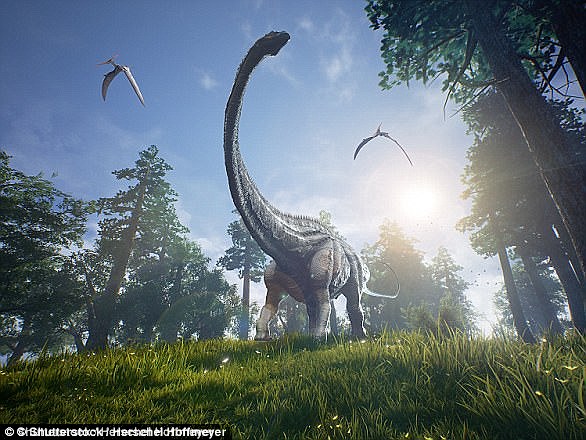 Sauropods were the first successful group of herbivorous dinosaurs, dominating most terrestrial ecosystems for more than 140 million years, from the Late Triassic to Late Cretaceous 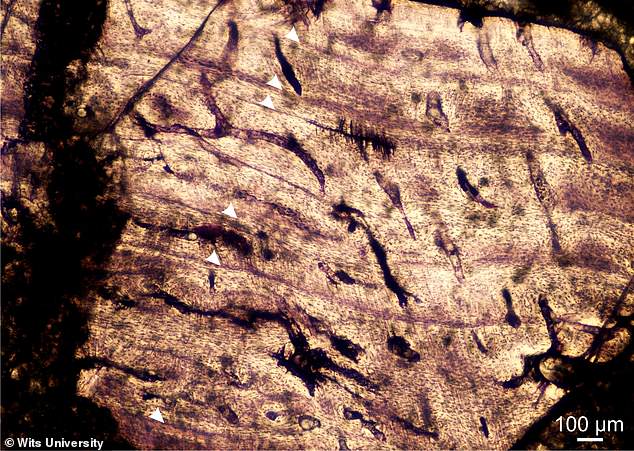 Closely spaced growth rings at the periphery of the fossil  (pictured) show that the animal is an adult. Scientists estimate that the specimen was a fully grown adult when it died, with the team estimating the dinosaur was 14 years old

‘It was of similar size to the gigantic sauropod dinosaurs, but whereas the arms and legs of those animals are typically quite slender, Ledumahadi’s are incredibly thick.

‘To me this indicated that the path towards gigantism in sauropodomorphs was far from straightforward, and that the way that these animals solved the usual problems of life, such as eating and moving, was much more dynamic within the group than previously thought.’

Measurements of the fossil’s ‘arms’ and ‘legs’ revealed that Ledumahadi walked on all fours, much like the sauropods which came to exist millions of years later,

The new method developed by the team unpicked dinosaur locomotion and allowed scientists to conclusively prove that many early sauropods stood on all fours.

Professor Roger Benson, of Oxford University, said: ‘Many giant dinosaurs walked on four legs but had ancestors that walked on two legs. 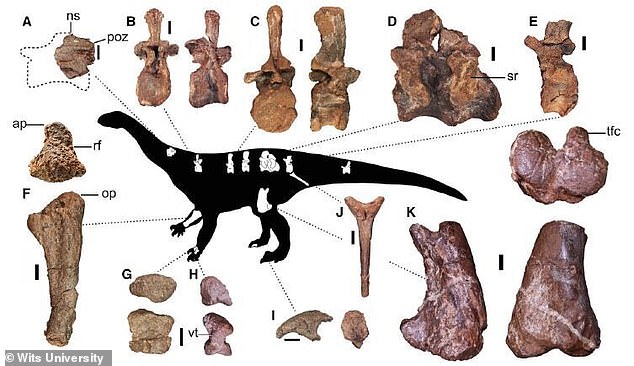 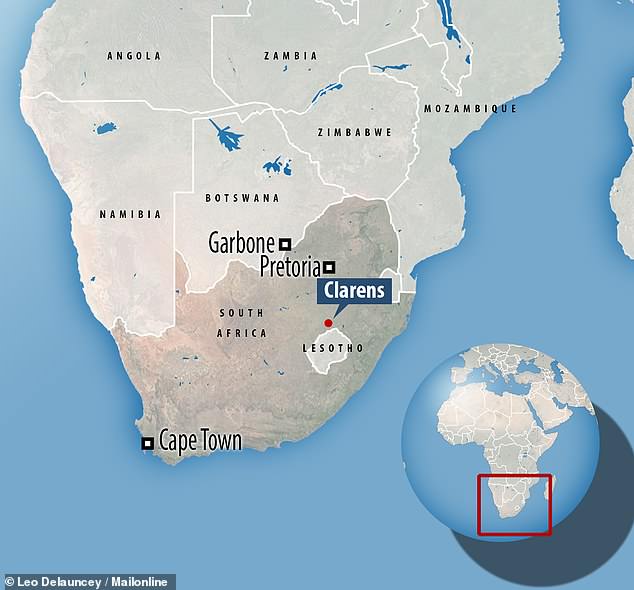 Ledumahadi lived in the area around Clarens in South Africa’s Free State Province. It is currently a scenic mountainous area, but looked much different at that time, with a flat, semi-arid landscape and shallow, intermittently dry streambeds

‘Scientists want to know about this evolutionary change, but amazingly, no-one came up with a simple method to tell how each dinosaur walked, until now.’

Professor Choiniere claims the finding requires a change in how scientists think about the evolution of these giant dinosaurs.

He said: ‘It shows us that even as far back as 200 million years ago, these animals had already become the largest vertebrates to ever walk the Earth.

‘The evolution of sauropods isn’t quite as straightforward as we once thought.

‘In fact, it appears that sauropodomorphs evolved four-legged postures at least twice before they gained the ability to walk with upright limbs, which undoubtedly helped make them so successful in an evolutionary sense.’

Ledumahadi lived in the area around Clarens in South Africa’s Free State Province. 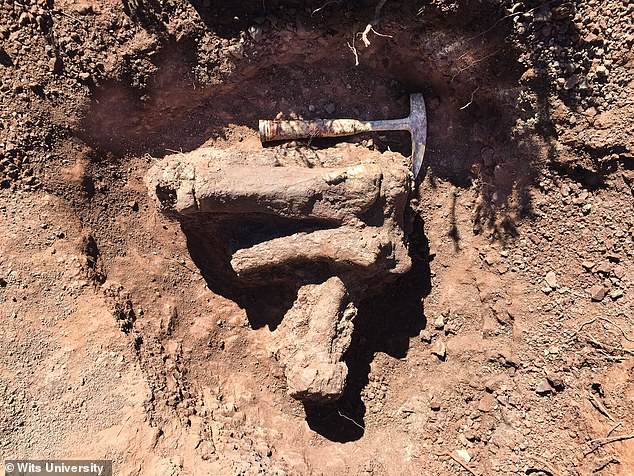 The partial foot of the fossil (pictured) shows the size of the animal. It lived 200 million years ago and stood 13 foot (four meters) tall at the hips

It is currently a scenic mountainous area, but looked much different at that time, with a flat, semi-arid landscape and shallow, intermittently dry streambeds.

Dr Emese Bordy said: ‘We can tell from the properties of the sedimentary rock layers in which the bone fossils are preserved that 200 million years ago most of South Africa looked a lot more like the current region around Musina in the Limpopo Province of South Africa, or South Africa’s central Karoo.’

Ledumahadi is closely related to other gigantic dinosaurs from Argentina that lived at a similar time, which Professor Choiniere said reinforces that the ‘super-continent’ of Pangaea was still assembled in the Early Jurassic.

He said: ‘It shows how easily dinosaurs could have walked from Johannesburg to Buenos Aires at that time.’