The ascension of a footballing prince was never a regal progression. To watch Brian Laudrup hover over muddied pitches or glide past belligerent defenders in the mayhem and magnificence of Scottish football of the 1990s was an invitation to view him as someone who was merely franking his birthright or indulging effortlessly in his talent.

The truth, though, is different. It trembles with chilled afternoons, shivers under heavy tackles, is wearied by the burden of heavy expectation and is marked by an afternoon when the future winner of the Champions League and European Championships decided at 15 he did not want to play any more.

Tribulation, too, has been a dogged companion for Laudrup. A player of consummate skill and an accumulator of silverware in Denmark, Germany, Italy and Scotland, he was forced prematurely into retirement. He subsequently faced a battle with cancer. ‘I have been fine for many years,’ he says, a decade after the diagnosis.

He has thus enjoyed the warm glow of triumph but this has been made more satisfying by the acceptance that there have been the moments when his will was tested to the ultimate but stayed strong in turbulent, buffeting episodes. It has imbued him with the ability to reflect both with gratitude and insight.

Laudrup, now 51, is mercifully fit, retains his breezy articulacy and is candid on a career that encompassed Bayern Munich, AC Milan, Chelsea and others. He was born to be a footballer, with his father, Finn, a Danish international, and his brother, Michael, one of the greatest players of his generation. Brian, the footballing prince, was crowned at Ibrox but not after banishing demons.

He found redemption and purpose on the banks of Loch Lomond on a drive with Walter Smith, the Rangers manager. But he had found his strength earlier in carrying and then shrugging off the hopes and demands of others.

‘I struggled a bit when I was younger,’ he says. He took his earliest steps in football in the freezing conditions of a wintry Copenhagen with friends, scuttling out on to the streets, inspired by English football and the play of Liverpool winger Steve Heighway. 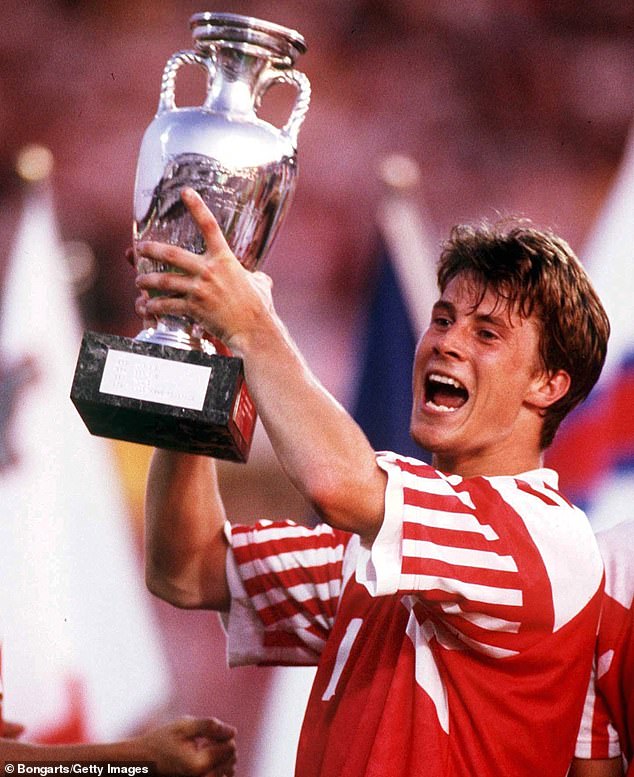 Laudrup enjoyed an illustrious career, which included him winning Euro 92 with Denmark

Born in Vienna where his father was playing, he returned to Denmark as a toddler and joined Brondby at six. He was identified immediately as something special. At 15, though, he walked away from the sport.

He adds: ‘Football is about having fun, expressing yourself but I got slagged and kicked in every game. One day, I had enough. I said to myself: “I am quitting”. I told my parents and they said: “Okay, It’s up to you. You should do what you want with your life”.

Michael, five years older, had already proved his worth. He was to play with, among others, Lazio, Juventus, Barcelona, Real Madrid and Ajax. Brian was to follow that tour of the continent, but not without his trials.

‘Early on, people would say: “Oh Brian could be even better than Michael”. I think that at the age of ten or 11 that’s a tough thing to ask,’ he says. ‘It was very heavy for me. I have to admit. When you are very young and maybe a bit insecure of yourself, and you are compared to your father and your brother, it can be devastating at times. 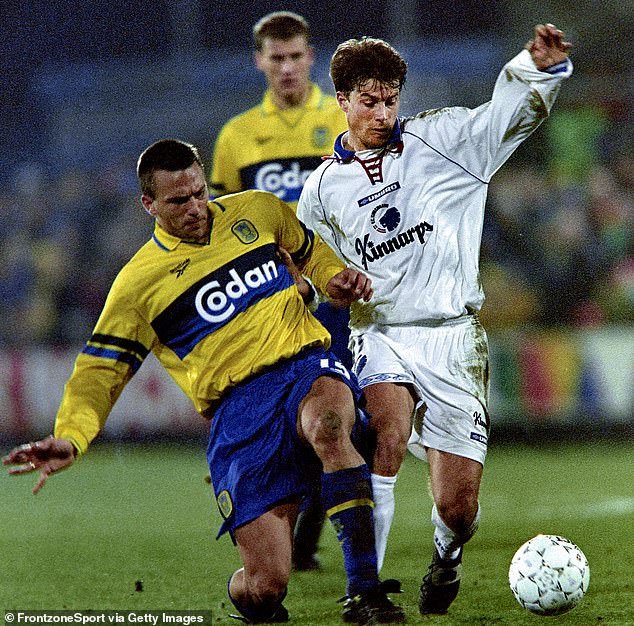 Laudrup in action for Copenhagen against his old side Brondby, where he started his career 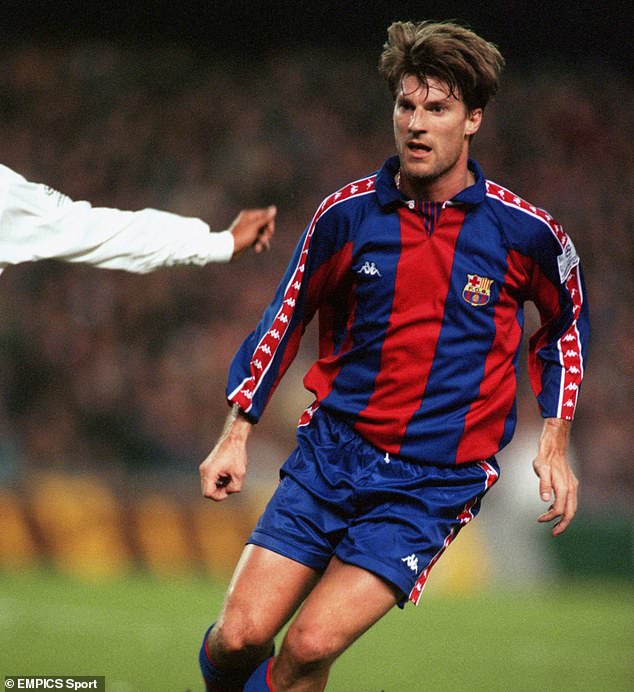 ‘I remember when I was a kid playing for my local club people would recognise me and say: “That’s Brian Laudrup”. Sometimes in Denmark people like to slag you off a bit and say: “He’s not as good as his brother”. Or at other times: “Oh my God, he’s a huge talent”. So I had to live with that attention. I didn’t like it. But I had to live with it.

‘That was the toughest football school I could go through. I had to try to be as good as I could be.’

He succeeded. His brief teenage retirement was followed by spectacular performances for Brondby that made a move upwards inevitable. He chose German football with Bayer Uerdingen before graduating to Bayern Munich. Italian football followed with spells at Fiorentina and AC Milan. He has a Champions League medal for the victory over Barcelona in 1994.

‘The three-foreigner rule in play then restricted me,’ he says. Milan’s foreigners in the 4-0 win were Marcel Desailly, Zvonimir Boban and Dejan Savicevic.

Brian sat in the stand, 50 yards from Michael. The older brother had been left out by Barcelona to accommodate ‘foreigners’ Ronald Koeman, Hristo Stoichkov and Romario. ‘I waved over to him and it was a strange moment to be part of. But that is what life throws at you,’ says Laudrup. 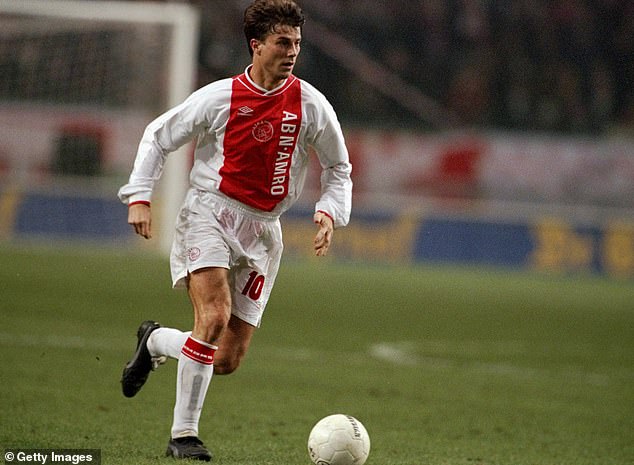 However, he admits: ‘I was searching for a place on and off the pitch, that right combination.

‘That was something I found in Scotland. But going through some great clubs, I discovered the right mentality, it’s all about winning. I learned that.

‘That set me up beautifully for the challenge I faced in Scotland. You must win. That is the expectation.

‘I chose my own path. That was important for me.’

This path wound around the banks of Loch Lomond in the summer of 1994. ‘That comes to my mind as if it was yesterday,’ he says. ‘I had the sense when I went into Walter’s car that this could be the turning point for me.

‘He told me about Rangers, about his ideas, about what he thought about my position. He would give me the freedom to play. I would be a very important player. He said people would expect an awful lot from me but he was sure I would be able to live up to that.’

That faith was gilded by three league titles, a Scottish Cup and a League Cup at Rangers under Smith. Laudrup adds: ‘I had been drawn towards Italy because that was the best league then. I wanted to show myself — and maybe other people as well — that Michael’s younger brother Brian could play good stuff as well. I came as a European champion (Denmark had won the 1992 tournament) but I played a right-midfield position I had not played before. I realised that Italy was more about tactics than players. 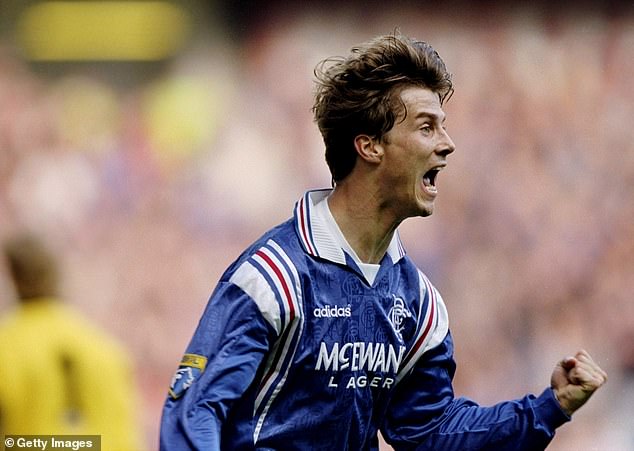 Laudrup enjoyed his time in Scotland, where he played for Rangers between 1994 and 1998

‘I was just one of many, many good players. You don’t know how many games you are going to play in a season and you lose that feeling of being important.’

But Scotland was different.

‘I had the feeling immediately I would be regarded as one of the most important players,’ he says.

‘I never had any problems with that. Others players might crumble but when I was on the ball I thought: “Okay Brian, you have to produce something”. I was okay with that because that was what I was good at.’

The chat with Smith left him with one thought: “I knew this was going to be the best move I could make.”

But what led him to that tour around Loch Lomond? ‘Kai Johansen,’ he says. The former Rangers full-back called his fellow Danish international, Finn, and the message was relayed that Brian was wanted at Ibrox. 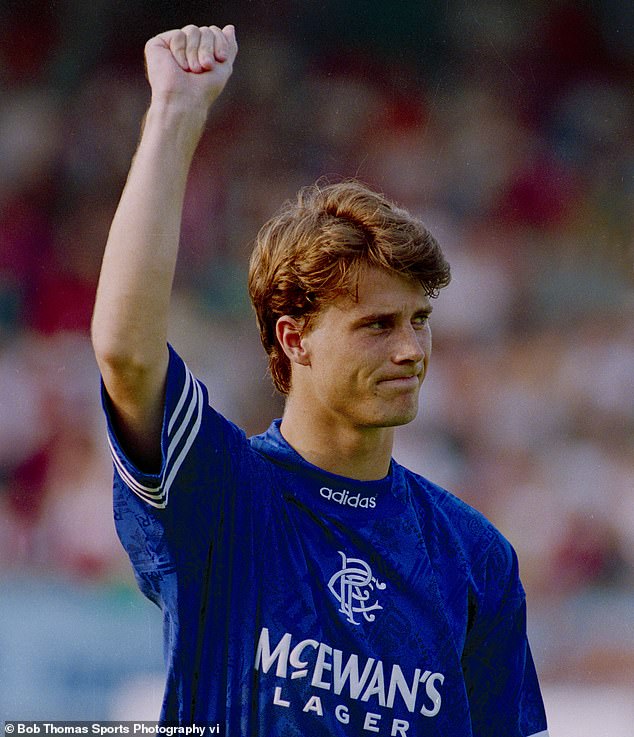 Given his fierce winning mentality, Laudrup proved to be the perfect fit for Rangers

‘I had watched Rangers in the Champions League, I had watched Richard Gough bleeding from his forehead, I had watched the team being roared on through the pouring rain and I thought: “Oh my God, that’s the sort of football for me”,’ he reveals.

His four seasons at Rangers installed him inarguably as a club great. The spell may have been relatively brief but it was heavily significant, wondrously memorable. ‘I am so a part of Glasgow, a part of Rangers,’ he says. ‘It will stay with me and my family for ever. It is an incredible bond.’

The feeling has been reciprocated. ‘I was in Amsterdam with friends, studying Ajax coaching methods,’ says Laudrup of the winter of 2004, four years after his retirement as a player. ‘We were walking down the street after dinner and I saw a group of about 100 Rangers fans.’

Laudrup was surprised at the sight until he realised they were in the Netherlands for a UEFA Cup tie against AZ Alkmaar.

His next reaction was delight: ‘The fans were singing and dancing their way towards me. Then they saw who I was and started singing: “There’s only one Brian Laudrup”.

‘It was something. It came out of the blue. I was laughing. It was hard to explain fully to my friends but it made me realise that I may left have left the club and country but they had not forgotten me.’

One memory, of course, is enshrined in the collective consciousness of the Rangers support. On May 7, 1997, Rangers beat Dundee United at Tannadice to achieve nine titles in a row. The only goal of the match was scored by Laudrup.

‘It was meant to be,’ he says with a laugh. ‘I scored with a header from a left-footed Charlie Miller cross. Those were two things that never happened. I maybe scored a header twice in my career. It was a fairy tale.’

Reality, though, had a subsequent, savage bite. Spells at Chelsea and Ajax were blighted with injury and a fine career came to an end. Worse followed. 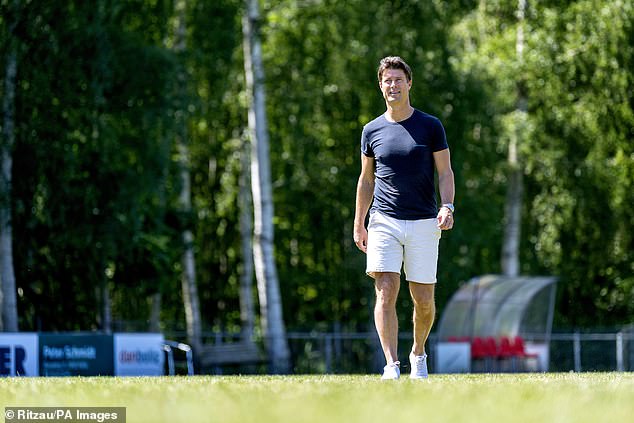 ‘It was devastating,’ says Laudrup of his cancer diagnosis ten years ago. ‘But I go for a scan next month and if that is okay, they will let me go. Fingers crossed.’

Now working as a television pundit and helping to coach disadvantaged kids, Laudrup knows he has so many blessings in life but he does not shrink from the reality of cancer, saying: ‘To be confronted with that illness is very scary. I never saw it coming, but you never do. All of a sudden you are in the midst of it. You have to confront it head on.

‘I was lucky that nowadays treatment is so effective and I have been fine for many years.

‘But any person who has been diagnosed with cancer will tell you it is tough to wait for a scan.

‘As it approaches, you are thinking about it. I have been fortunate to hopefully see the back of it. It was something in my life but hopefully it has gone.’

He adds: ‘It is not always about winning trophies or enjoying yourself. Life has up and downs. Sometimes you go through very difficult patches and sometimes it is a breeze. The good moments make you realise it wasn’t always like this.’ 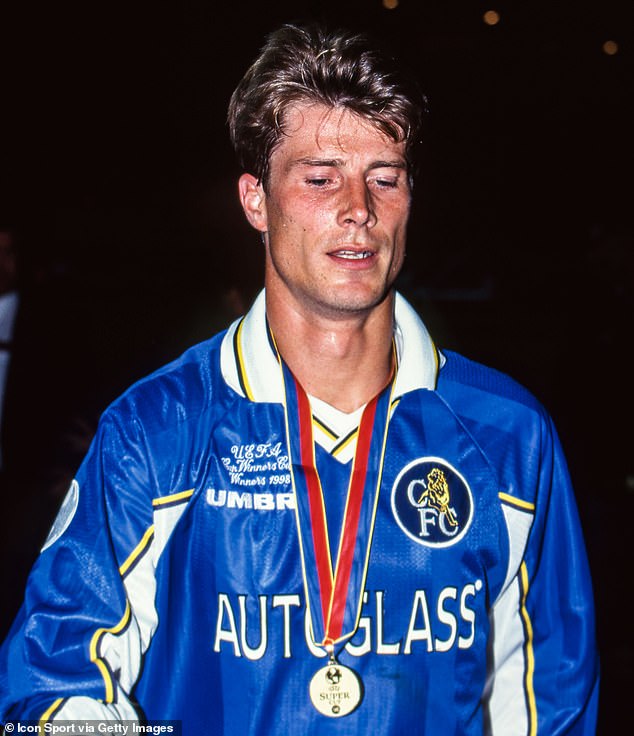 In 1998, Laudrup had a short spell in England at Chelsea which was blighted by injury

The future, though, offers substantial promise. Laudrup eagerly awaits the resumption of European football in his role as a television analyst.

He is keen, too, to take up his role as Sportsmail columnist.

‘I keep an eye on the SPFL every day through television and the internet,’ he says. ‘I know the issues and the personalities.’

His understanding, though, of Scottish football is also deeply personal. ‘I was born with a talent, obviously, but you need to understand that must go along with hard work and the right mentality,’ he says.

‘I believe all that was there at Rangers. It was just right for me.’

The boy who played in the Copenhagen streets, prospered in the Bundesliga, strove in Serie A and won the biggest honours in European football.

But he found something else in Scotland. It is a mixture of fulfilment, eternal affection from Rangers supporters and a respect that blurs partisan boundaries. It’s good to have him back.