A spirited young girl, a forbidden love and a coming-of-age tale that will have you on the edge of your sofa (plus a rather dashing male lead or two) — it has all the elements of a familiar Sunday night drama.

But the BBC’s latest offering, A Suitable Boy, which starts tomorrow night, is anything but familiar.

For the six-part series is the first in the corporation’s history to have a cast entirely made up of people of colour.

And that’s not the only groundbreaking thing about the drama, set in the 1950s, which follows the lives of four families against the backdrop of a newly-independent India and is based on an epic novel of the same name.

Three years in the making, with a £16million budget, a Golden Globe-nominated director and newcomers playing two of the leads, it’s pioneering in almost every sense — and the global rights have already been snapped up by Netflix.

So what can viewers expect? Here, SARAH RAINEY takes you behind the scenes of A Suitable Boy.

A Suitable Boy, which starts tomorrow night, is the first in the corporation’s history to have a cast entirely made up of people of colour. Pictured, Ishaan Khatter and Tabu starring as Maan and Saeeda Bai

Based on one of the longest novels ever published

At almost 1,400 pages and more than half a million words, A Suitable Boy, by Indian writer Vikram Seth, is one of the longest novels published in a single volume in the English language.

Published in 1993, it took eight years to write and was initially reviewed as ‘bland’ and ‘exhausting’ to read. But over time it developed a cult following and was recently named one of the 100 most inspiring novels of all time.

The story follows free-spirited heroine Lata Mehra (Tanya Maniktala), a Hindu-Indian student who rebels against her mother’s attempts to arrange her marriage to a ‘suitable boy’.

Lata has her own plans, and tells her mother she doesn’t want to get married. She sets out on her own path, meeting the mysterious Kabir Durrani (Danesh Razvi), a Muslim boy.

Seth, 68, who studied at Tonbridge School in Kent and Oxford University, initially had doubts about the project.

‘It was with some anxiety that I agreed to my book being put on the screen — but I’m glad I did,’ he says.

With an estimated budget of £16 million — more than Poldark and Belgravia combined; and roughly the same as the Downton Abbey film — no expense has been spared on A Suitable Boy.

From splashing out on costumes and jewellery to spending on lavish parties — from Hindu weddings to Holi festivals and boat trips on the Ganges — extravagant food and exotic animals, all squeezed into six episodes, this is one of the most expensive BBC series ever made.

And it has been a long time coming. 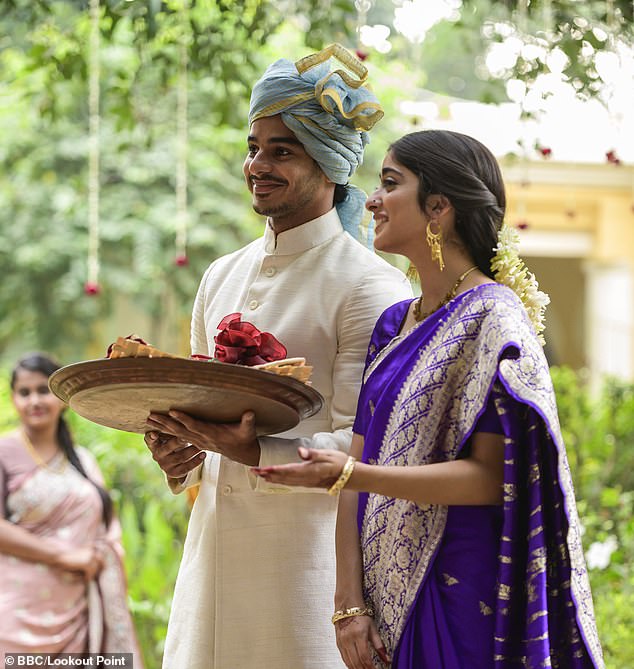 With an estimated budget of £16 million, more than Poldark and Belgravia combined, no expense has been spared on A Suitable Boy. Pictured, Ishaan Khatter and Tanya Maniktala

Director Mira Nair first wanted to turn the book into a screenplay back in 1993 but could not get the rights to do so.

The BBC bringing in Bollywood

The cast list runs to a staggering 110 names, and joining the newcomers are some of the biggest stars in Indian film.

The most famous, who plays glamorous courtesan Saeeda Bai, is Tabu, known by her first name only, and regarded as one of the finest actresses in India.

A Suitable Boy may be set in the 1950s but the sad truth remains that to this day in the Asian community, be it in India or the UK, Hindu and Muslim marriages are a huge taboo.

Many non-Asian viewers will likely be discovering this for the first time, having assumed that an Indian family would only have issues with their offspring marrying someone of a different race.

But Hindu-Muslim prejudices are the real source of division and racism, with a deep-rooted animosity on both sides that still leaves some young people in a Romeo and Juliet-style dilemma that can tear families apart.

Even though I come from a liberal Hindu family, I imagine some relatives might have an issue if I dated a Muslim.

I remember when my then 16-year-old Hindu friend was forced to break up with her Muslim boyfriend after her family found out; her mum burst into tears and her dad refused to speak to her until she had ended things.

Social media groups for Asians are full of dozens of stories like this.

Yet it is inspiring to see the comments of other young people, men and women alike, advising these star-crossed lovers to stay strong and to choose love over hate.

The hope is that with future generations, this version of a Hindu-Muslim marriage becomes the norm, and stories like that of Lata and Kabir are eventually confined to the history books.

The 49-year-old — dubbed ‘India’s answer to Meryl Streep’ — has been acting since the Eighties, and is known for playing complex female characters, for which she’s won several awards.

Although she has filmed in Britain before and starred in Hollywood movie Life Of Pi, this is her first project for British TV.

She was convinced to join the cast during a dinner party with director Mira Nair. ‘She said, ‘I’ve just been in Calcutta doing a recce for my latest show, and I’m going to come to you soon with a part, and you had better be ready,’ ‘ Tabu says.

Costumes from stylists to stars

From bejewelled saris in dazzling hues to vibrant flowers, jaw- dropping jewellery and sumptuous interiors, every scene in A Suitable Boy is awash with colour.

The costumes are the handiwork of Arjun Bhasin, a New York-trained designer based in Mumbai who’s a veteran of Bollywood films and was formerly fashion director at GQ India.

Recently, he has become a darling of Hollywood, nominated for an award for his work dressing Tom Hanks in A Beautiful Day In The Neighborhood, winning critical acclaim for Life of Pi, and styling megastars including Sarah Jessica Parker and Kate Hudson.

Director who drew on her own life

Mira Nair, an Indian directing legend, is the driving force behind A Suitable Boy.

Having had the series in mind for almost two decades, she ‘threw her sari in the ring’ when she heard rumours about the project in 2017 and contacted the production company with a whole book of ideas to convince them she was right for the job. She signed in 2018.

She brought in her own team of creatives, from cinematographers to costume designers. She also insisted all filming took place in India and that the entire cast be made up of Indian actors. Nair drew on her own childhood in the Indian town of Bhubaneshwar.

‘I grew up in these bungalows as a daughter of a civil servant, just after this time when the country found its voice,’ she says.

‘When people say the casting of the show is radical, it’s only radical to you guys. It’s about time that this Western world understands we have extraordinary talent and that should be normalised.’

Every single second of filming in the series took place on location in India.

Set in the fictional town of Bhrampur, the real locations included cities such as Lucknow, Kanpur (both in northern India) and Maheshwar (central India).

Lata’s university is King George’s Medical University in Lucknow, while the grand Mahmudabad Palace acts as a backdrop for her sister’s wedding in the opening scenes. The city’s well-known private school La Martiniere College offered up locations from cricket nets to polo fields. 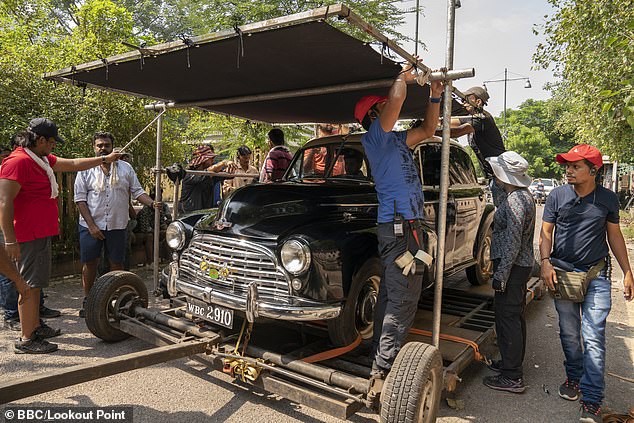 The six-part series boasts a crew made up almost exclusively of Indian men and women, with the production team (above) recruiting local workers as runners and riggers as they filmed

When Lata is wooed by a shoe maker, the scenes were filmed in a tannery in Kanpur. ‘The smell, whatever you see on screen, it’s the truth,’ says star Tanya Maniktala.

Elsewhere in the country, the production team shunned typical filming hotspots for lesser-known towns and villages in order to make the action more authentic.

‘We filmed in villages that no one has ever filmed in before, and sometimes the villagers would become extras,’ says co-star Ishaan Khatter. ‘It was very special.’

The Welshman who wrote the script

Andrew Davies, 83, is the doyen of literary adaptations for the small screen, and the man behind TV series Pride And Prejudice, War & Peace, Les Misérables and House Of Cards.

But as a white Welshman, his involvement has been branded a ‘let-down’ and ‘a slap in the face’ by some.

The book’s author, Vikram Seth, has defended the writer’s involvement, saying: ‘Colour should have nothing to do with it.’

‘I didn’t have to work hard on the characters,’ he says.

‘There they were and they were lovely. I didn’t have to work hard on the dialogue — it was so beautiful.’

She has been dubbed the new ‘queen of Sunday night TV’ — but this is only Tanya Maniktala’s second TV acting job.

The 23-year-old, who plays heroine Lata Mehra, was tipped off about auditions by friends in the drama department at Delhi University. 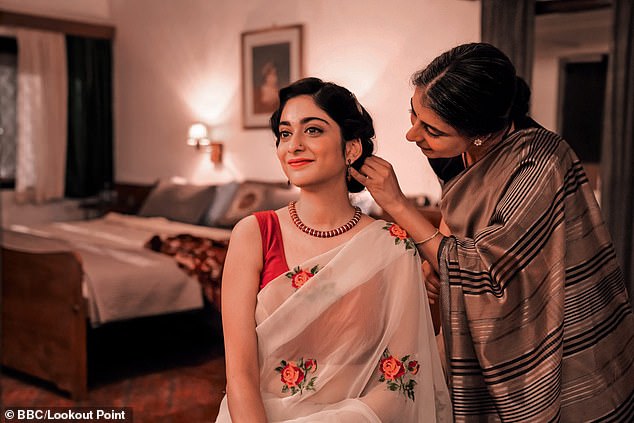 Tanya Maniktala, 23, (pictured with Mahira Kakkar) plays heroine Lata Mehra in what is only her second TV acting job ever

She was working as a copywriter in an ad agency and considering giving up acting when the call came.

‘I get goosebumps now when I remember showing up,’ she says.

Like her character, Tanya studied English literature and lives with her large family in India.

Leading man Danesh Razvi — who plays Kabir Durrani, deemed an unsuitable match for Lata on account of being Muslim — is even newer to the acting scene.

Born in Mumbai, he studied acting in California, but this is his first ever on-screen role. He described working on the series as ‘exhilarating’.

Ishaan started out as a child star and has since won several awards for his roles in Indian films.

He describes being cast in A Suitable Boy as a ‘ridiculous honour’. 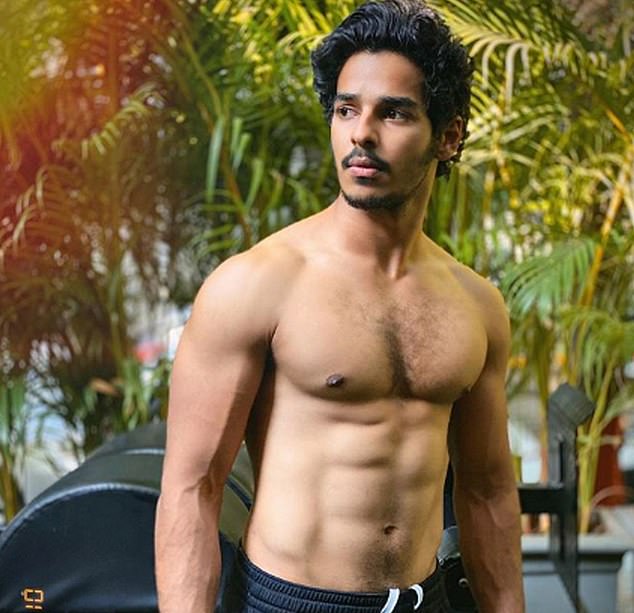 Ishaan Khatter, 24, who plays stubborn Maan Kapoor, says being cast in A Suitable Boy is a ‘ridiculous honour’

With his heart-throb good looks — he’s partial to posting a topless selfie on Instagram, displaying his very impressive muscles — he’s sure to join the ranks of Mr Darcy and Ross Poldark among female viewers’ affections for Sunday night TV.

He has 1.2 million Instagram followers and co-star Tabu has 1.8 million.

Crew hired on location… and subtitles in two languages

The six-part series boasts a crew made up almost exclusively of Indian men and women, with the production team recruiting local workers as runners and riggers as they filmed.

Each morning, the cast and crew would get together for a life-affirming group yoga session before they started work on the show.

In another BBC first, there are occasional subtitles as the cast slip into Urdu and Hindustani, interspersed with English.