The texts were released on Monday night in a batch of documents, evidence and video footage shared by the Chicago Police Department.

Among the hundreds of pages that were put out are a list of texts between the pair dating back to November.

Some were previously released by the police department. In those, Smollett asked Osundairo for a ‘molly connect’.

The new texts show him repeatedly asking him to come round to ‘smoke’ and joking that he had turned him into his ‘drug pusher’.

In one exchange, Smollett offered him a ‘non sexual massage’ from a masseuse he had paid.

‘This dude is amazing,’ he said, adding: ‘he’s being paid for two anyway.’ 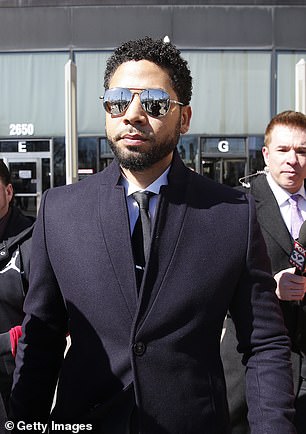 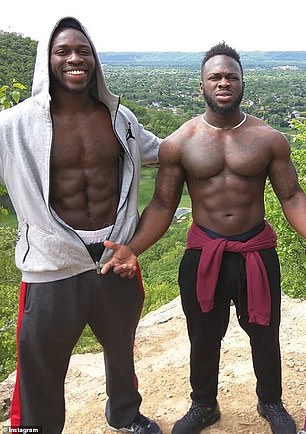 Abel passed on the offer, saying: ‘I’m good on the massage.’

Minutes later, Smollett replied: ‘This n***a is handling life. Sucking my d*** and it’s all good and working!’

Much of their interaction was about drugs.

You got weed I can buy? I feel like you’ve become a full drug pusher on my watch

Smollett to Osundairo on January 16

On July 1, last year, Smollett text him saying: ‘Coming into Chicago tonight if you wanna kick it. Only there one night. Landing at 945. Get some Whitney!’

He replied to say where they would meet up.

Smollett answered: ‘Get some Whitney. I’ll give the cash.’ He then asked if he could pay him on Venmo.

Whitney is a street name for cocaine.

On January 16, the actor asked for ‘4 molls’. Their exchange was as follows;

‘Should I grab that kind sir?’

‘Ight bet. Let me know when you’re off.’

‘You wanna come grab it or should I come there?’

‘Come through. You got weed I can buy? I feel like you’ve become a full drug pusher on my watch haha.’

‘Right. The new pablo Escobar (sic) minus the. I don’t sell though I just get.’ 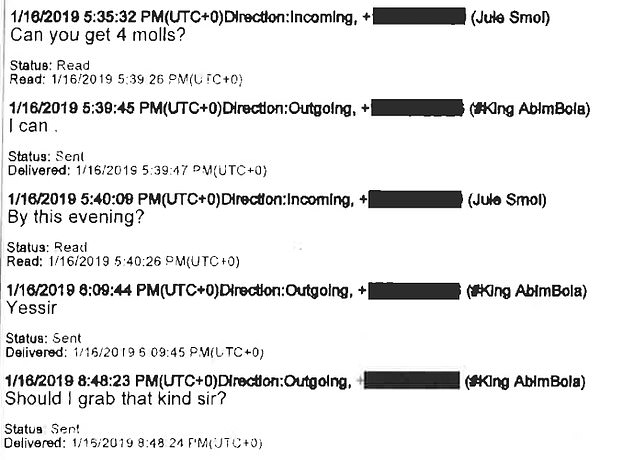 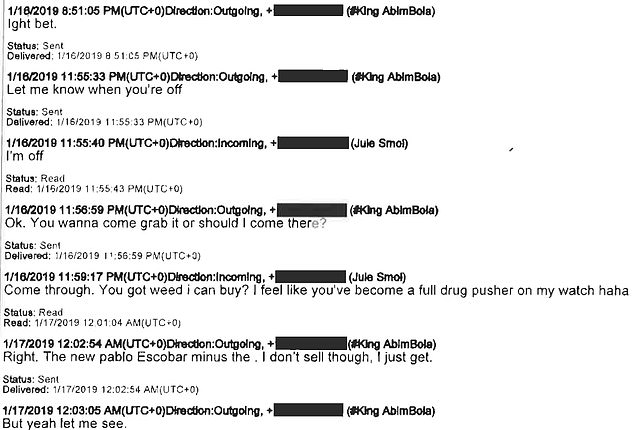 On January 16, Smollett asked him for ‘4 Molls’ and joked that he had turned him into  a ‘full drug pusher’ 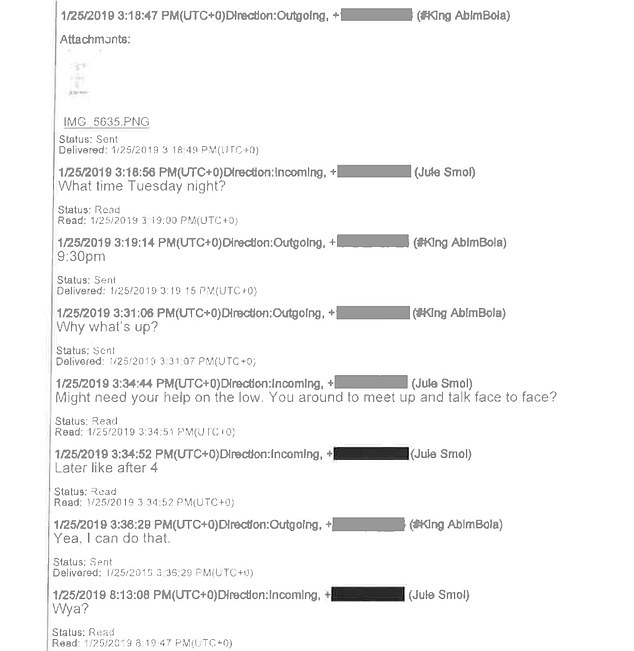 In the days that followed, their interactions turned to Jussie’s training for a music video

They then started discussing the nutrition plan Abel and his brother, Ola, were putting together for the actor.

In those messages, Smollett said he did not eat pork, beef or dairy which was bad for is vocals.

They were discussing the plan when Smollett made the alleged proposition for the brothers to stage the attack, asking for help ‘on the low’.

The last text between them that was released before the incident was Smollett saying: ‘Gotcha. Did it this morning.’

It is unclear what he was referring to.

On January 29 at around 5pm, Abel text the actor saying: ‘Bruh say it aint true. I’m praying for a speedy recovery. S**t is wild.’

There was no reply from Smollett in the files released by the police department.

Police say Smollett called him two hours later, while he was in transit on his way to Nigeria.

They spoke again on January 30, 2019 while Abel and his family were in Istanbul, still making their way to Africa.

Abel and his brother then watched from afar as the scandal played out in Chicago.

Before their return, Abel searched Google for Smollett’s name and the case multiple times.

On January 30, he googled ‘CNN Jussie’ at 5.17pm. He then googled ‘Jussie Smollett’, six more times that night.

In the days that followed, he carried out the same search at least 40 times.

The brothers were arrested at Chicago O’Hare airport on February 13 as they arrived back from Nigeria.

The new files were released on Monday night by the Chicago Police Department after months of public pleas for transparency.

A special prosecutor has now been told to look into what happened and why Cook County State’s Attorney Kim Foxx dropped all the charges against the actor.