A vaccine may keep patients alive for up to seven years longer with the same brain cancer that killed Dame Tessa Jowell, trial results suggest.

Scientists tested the DCVax-L injection, a form of immunotherapy, on more than 300 patients diagnosed with a glioblastoma.

They discovered, on average, the vaccine kept them alive for just under two years – around six months longer than expected.

The longest survivors have lived for more than seven years, according to the results published in the Journal of Translational Medicine.

Brain cancer charities have branded the results ‘remarkably promising’ in the wake of Dame Jowell’s death two weeks ago, aged 70.

The former Labour cabinet minister died in her family’s arms after a year-long battle with glioblastoma, which strikes 4,000 people in the UK each year.

Standard treatment for the most aggressive adult brain tumour involves surgery followed by radiotherapy and chemotherapy.

Patients who follow this path live for 15-17 months, on average – a figure that has improved very little in recent years.

What did the trial find?

But the average survival of patients who took part in the DCVax-L trial was 23 months – a 35 to 53 per cent boost.

Nearly of third of those who took part in the experiment survived for at least 40.5 months. This is two years longer than expected.

Unlike chemotherapy and radiotherapy, the DCVax-L vaccine caused no reported side effects for the majority of patients.

Just seven of the 331 patients reported any significant adverse effects which may have been related to their treatment.

Hope to thousands of patients

Dr David Jenkinson, chief scientific officer for The Brain Tumour Charity, said: ‘These results appear remarkably promising for a community of patients who have been given little hope for decades. 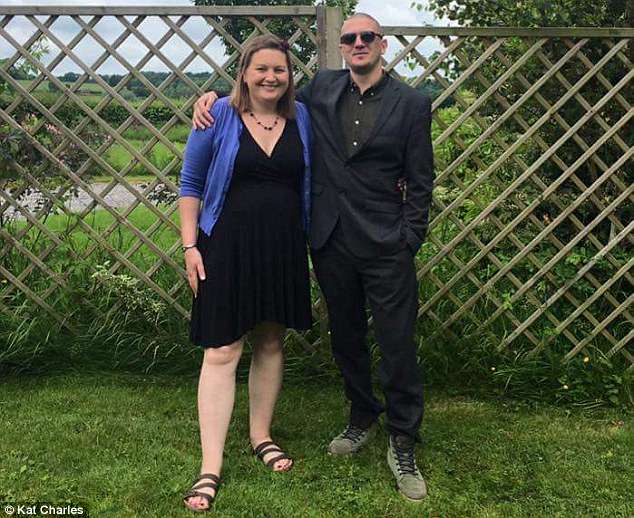 In 2014, Kat Charles (pictured with husband Jason) was given three months to live after NHS doctors ran out of options to treat her brain cancer. Three and a half years on, her most recent MRI scan showed no trace of the tumour after being given the vaccine DCVax-L

‘THEY SAID THERE WAS NOTHING MORE THEY COULD DO FOR ME’

In 2014, Kat Charles was given three months to live after NHS doctors ran out of options to treat her brain cancer.

‘They said there was nothing more they could do for me,’ said Mrs Charles, now 36. ‘I was distraught.’

Three-and-a-half-years on, the bank analyst’s most recent MRI scan showed no trace of the tumour.

Mrs Charles and her husband Jason, who live in Milton Keynes with their five-year-old son Jacob, credit the immunotherapy vaccine DCVax-L for her survival. 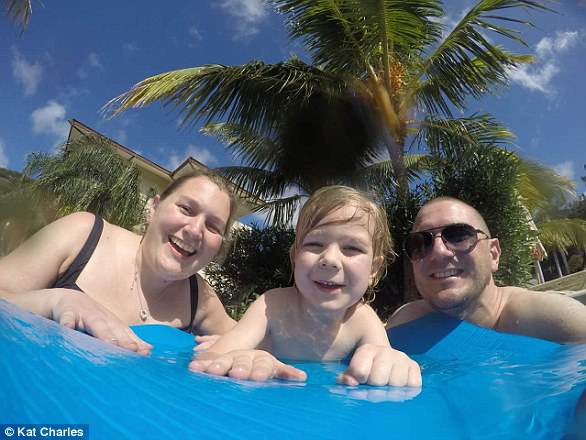 Mrs Charles and her husband Jason live in Milton Keynes with their son Jacob, five

‘DCVax has done what everyone said was impossible,’ Mr Charles said. ‘If not for this treatment, I would be without my wife and without a mother for our child.’

Mrs Charles was initially diagnosed with a slow-growing brain tumour in 2011 during a trip to Costa Rica with Jason, when she suffered a major seizure out of the blue.

Then 29, she was told back in the UK that doctors would monitor the tumour for signs of growth but there was no need for immediate treatment.

But within two months of giving birth to Jacob in 2013, further seizures led to a scan which revealed the tumour had developed into a glioblastoma – the most aggressive type of brain cancer in adults.

In the three years following her diagnosis, Mrs Charles underwent three operations along with radiotherapy and chemotherapy.

She also joined a clinical trial to test the impact of blocking a protein involved in the spread of cells, which appeared initially to keep her tumour at bay.

After 12 months, however, it began to progress once again and Mrs Charles was given the devastating news that the NHS could do no more.

‘I would have felt like giving up but I had my son. I couldn’t give up,’ she said.

The couple launched a fundraising drive to meet the cost of funding DCVax-L privately, enabling Kat to access the treatment.

Mrs Charles continues to have regular injections of the vaccine, which was developed by isolating immune cells from her blood and combining them with markers from a sample of her tumour.

‘I go to London on the train, I have a shot in each arm and then I’m free to go home,’ she said. ‘It doesn’t give me any side effects. It’s fantastic.’

‘We need further analysis of the data from this trial and more research in this area to ascertain the role that immunotherapy can play in the battle against brain cancer.

‘If there is clear evidence that this type of treatment can extend survival with a very low risk of adverse effects, we will work on behalf of everyone affected by brain cancer to ensure it becomes widely available.’

HOW DOES THE VACCINE WORK?

DCVax-L has been developed by Northwest Biotherapeutics, a pharmaceutical firm based in Maryland, US.

It is created for each patient individually by isolating specific immune cells, known as dendritic cells, from his or her blood.

These cells are then primed with biomarkers or ‘antigens’ from a sample of the patient’s tumour.

When the vaccine containing the cells is injected back into the patient, they ‘share’ that information with the body’s immune system.

This allows the body to recognise the target, which it begins to attack.

DCVax-L has been developed by Northwest Biotherapeutics, a pharmaceutical firm based in Maryland, US.

It is created for each patient individually by isolating specific immune cells, known as dendritic cells, from his or her blood.

These cells are then primed with biomarkers or ‘antigens’ from a sample of the patient’s tumour.

When the vaccine containing the cells is injected back into the patient, they ‘share’ that information with the body’s immune system.

This allows the body to recognise the target, which it begins to attack.

The early findings from the study are from an 11-year trial involving patients in the UK, the US, Canada and Germany.

All of the participants in the trial underwent the standard treatment for glioblastoma of surgery followed by radiotherapy and chemotherapy.

Two thirds, 232 patients, were then injected regularly with DCVax-L along with further chemotherapy with temozolomide.

The remaining third were given a placebo – an indistinguishable and harmless substitute for the vaccine – along with temozolomide.

WHAT IS A GLIOBLASTOMA AND JUST HOW DEADLY IS IT? THE AGGRESSIVE BRAIN TUMOUR SUFFERED BY JOHN MCCAIN

Senator John McCain was diagnosed with a glioblastoma in July 2017

Glioblastoma is considered the most aggressive tumour that can form in the brain. Senator John McCain was diagnosed with one in July 2017.

Patients have a 10 per cent chance of surviving five years after their diagnosis, according to figures. The average lifespan is between 14 and 16 months.

Three adults per every 100,000 will be struck down with a glioblastoma, says The American Association of Neurological Surgeons (AANS).

It is most commonly found in men aged 50 to 60, and there is no link between developing glioblastoma and having a previous history with other cancers.

WHAT IS THE TUMOUR MADE OF?

The tumour is made up of a mass of cells growing quickly in the brain, and in most cases patients have no family history of the disease.

It won’t spread to other organs, however, once it is diagnosed, it is nearly impossible to target, surgeons claim.

WHAT TREATMENT IS AVAILABLE?

Because the tumour likely already spread deep into the brain by the time it is diagnosed, the cancerous tissue is incredibly difficult to remove.

Surgeon will only ever remove the tumour, or part of the tumour, if it won’t do any damage to the surrounding brain tissue.

Dr Babcar Cisse, a neurosurgeon at the Weill Cornell Brain and Spine Center, told Daily Mail Online in July 2017: ‘By the time a glioblastoma is diagnosed, microfibers can spread to the rest of the brain which an MRI would not spot.

‘So even if the main tumor is removed and the patient receives radiation and chemotherapy, it will come back.’

Brain tumours are graded from between one to four, depending on how fast they grow and how aggressive they are.

Malignant tumours are either given a high-grade three or four, while benign ones are given a lower grade one or two.

Glioblastoma is often referred to as a grade four astrocytoma – another form of brain tumour, says the AANS.

Patients typically complain of symptoms such as confused vision, trouble with memory, dizziness and headaches.

The symptoms are somewhat nonspecific, and vary from person to person, and may not persist.

The disease is therefore impossible to diagnose based on symptoms alone.

The trial was ‘blinded’, so neither patients nor the researchers knew who were being given the vaccine or the placebo.

However, every patient whose tumour recurred during the trial was automatically offered DCVax-L.

By the end of the experiment, almost nine out of ten of the volunteers had been given the vaccine at some point.

Professor Keyoumars Ashkan, at King’s College Hospital, one of 69 co-authors of the study, welcomed the findings.

He said: ‘The interim results of this phase 3 trial give new hope to the patients and clinicians battling with this terrible disease.

‘Although definitive judgment needs to be reserved until the final data is available, the paper published today hints at a major breakthrough in the treatment of patients with glioblastoma.

‘This is significant and much-needed, given that the last widely accepted major advancement in the field occurred over a decade ago.

‘Cautious optimism is welcome in an area where for so long the disease and suffering have had the upper hand.’

May 2017: Labour grandee Tessa Jowell, who has two children and three stepchildren – including the food blogger Deliciously Ella – suffers two ‘powerful seizures’ in a taxi, she would later reveal. She had suffered no symptoms previously.

Two days later she is told she has a brain tumour – glioblastoma, an aggressive and rare form. It is operated on the following week.

Baroness Jowell was treated by the NHS for her cancer but doctors in Britain told her that they could do nothing more for her so she looked to other countries for her hunt for treatment.

She has been to Germany looking at trying a new immunotherapy, and vowed to keep seeking new ways of tackling the cancer.

17 September 2017: Baroness Jowell reveals she is being treated for brain cancer in a Twitter post marking her 70th birthday. She pledges to help other people fighting the disease.

24 January 2018: Speaking publicly about her illness for the first time in a moving interview with BBC Radio 4, Baroness Tessa says she has ‘no idea’ how long she has left.

Her cancer is very advanced and she stumbles over her words several times during the interview – telling the presenter, ‘the tumour bloody well does this to you’.

25 January 2018: Baroness Jowell wins heartfelt applause in the first ever standing ovation in the House of Lords as she returns to Parliament to plead for new cancer treatments.

She delivers an emotional speech to peers, leaving many in tears. She reveals just 2 per cent of cancer funding was spent researching brain conditions and warned no drug breakthroughs had been made in 50 years.

22 February 2018: Theresa May shares an emotional moment with Baroness Jowell as she announces a £45million boost to improve care for the disease threatening to claim her life.

The government has announced £20 million in funding for research into brain tumours over the next five years, which will be added to £25million from Cancer Research UK.

A centre focusing on adult brain tumours is due to open later this year.