A new version of ‘Hark! The Herald Angels Sing’ has sparked outrage among bishops after it removes the mention of Mary’s virginity.

Senior Church of England clergy have warned that using the altered version of the popular hymn ‘plays down Mary’s virgin birth’ and misleads people about Christianity.

Carol services and choirs have been replacing line ‘Offspring of a virgin’s womb’ with ‘Offspring of the favoured one’. Stock image

Revd Marcus Walker, rector of Great St Bartholomew in the City of London told the Telegraph that is ‘plays down the reality of Christ’s birth, and Mary’s femininity – that he came out of a womb; this was a real birth from a real woman.

And The Bishop of Crediton, Bishop Jacqueline Searle says that we should not be ‘squeamish’ about singing about a ‘virgin’s womb’, the Telegraph reported.

Bishop Searle also believes Christmas hymns should not be tampered with because they could potentially mislead people who know little about Christina faith.

Donald Allister, the Bishop of Peterborough, told the Telegraph: ‘Wesley’s great Christmas carol conveys the true Christmas message joyfully and powerfully. It is a great shame to see any attempt to reduce that message.’

Members of the clergy have warned against searching online for hymns which may have had their words tampered with.

This comes after carols and hymns have been altered to be more ‘inclusive’ to avoid language such as ‘sons and ‘men’. 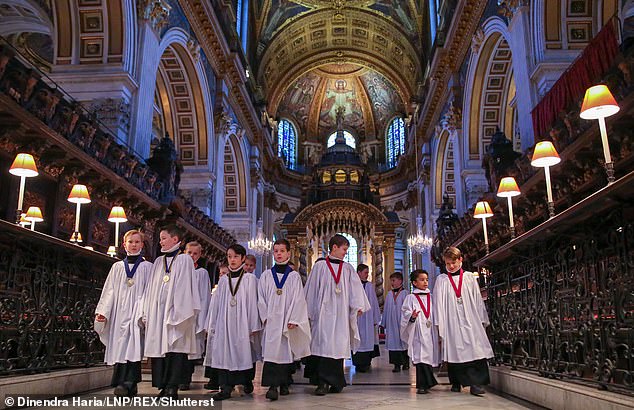 Bishops also believes Christmas hymns should not be tampered with because they could potentially mislead people about the faith of Christianity. Stock image