Youki’s Japanese Restaurant and Press Gourmet Pizza and Pasta on the trendy Chapel Street have been added, as Jesus is the Way Christian Church in Footscray.

A Euros final watch party at the The Crafty Squire in the CBD has also been listed as a Tier 1 site.

Phillip Island has become the latest hotspot after a man in attendance at the MCG on Saturday brought the highly-infectious Delta variant to the coastal town.

There were three new cases linked to the man announced on Saturday with five new Tier 1 exposure sites added to the state’s list which now tops 181.

Cowes Woolworths and Aldi have also been added as the regional area’s crisis grows.

Meanwhile thousands of students and their families have been forced into isolation as the virus sweeps through several schools.

Victoria appears likely to stay in lockdown much longer than five days after another 19 cases of coronavirus were recorded on Saturday.

The state health department said all the cases were linked to the current outbreak, which now numbers 43 community cases in total.

A concerning 18 out of the 19 cases on Saturday were active in the community, with the list of exposure sites growing by more than 30 locations since Friday evening, now sitting at 165.

The concerning spike in cases is also the largest number Victoria has recorded in more than nine months.

Positive cases have been confirmed from the MCG, where a man in his 20s from the members reserve area watched the Geelong-Carlton AFL match last weekend.

Two friends of that person have also caught the virus and travelled to Phillip Island.

A social contact of a positive Trinity Grammar teacher who was at the MCG has also tested positive, as well as two further staff members at Trinity. 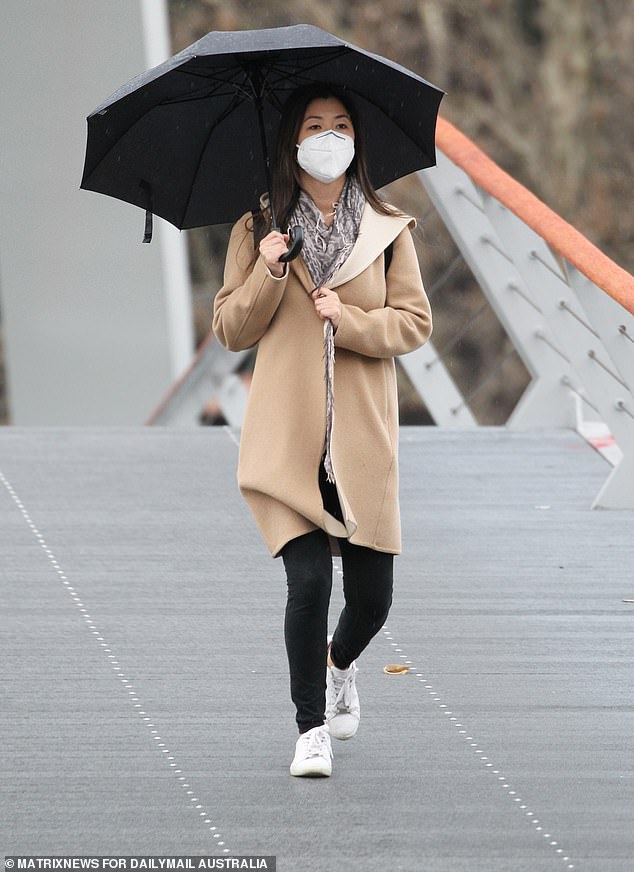 There were three new cases at Miss Frankie in Cremorne, in Melbourne’s south-east, including a patron and staff member.

A student from St Patrick’s Primary School in Murrumbeena has tested positive, as have two staff members from Bacchus Marsh Grammar.

One student from Bacchus Marsh Grammar has recently also recorded a positive result.

This is in addition to four household contacts and a positive case from Young and Jackson’s pub. They include the man’s wife, three daughters, and the partner of one of his daughters.

One household contact of the positive man in the City of Hume has also tested positive – but they were isolating through their infectious period.

The development comes as Health Minister Martin Foley said Victoria’s decision to hold a snap lockdown, a contrast to NSW, was ‘needed.’

‘We have gone hard and we have gone early to make sure that this lockdown is as short as possible,’ he said. ‘We will continue to assess our progress on this front, via both metropolitan and regional Victoria.’ 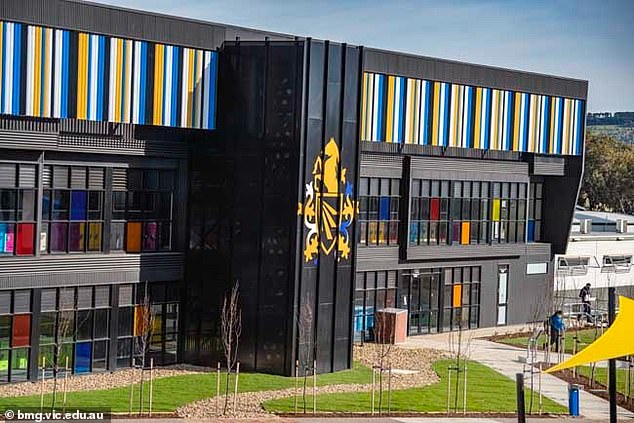 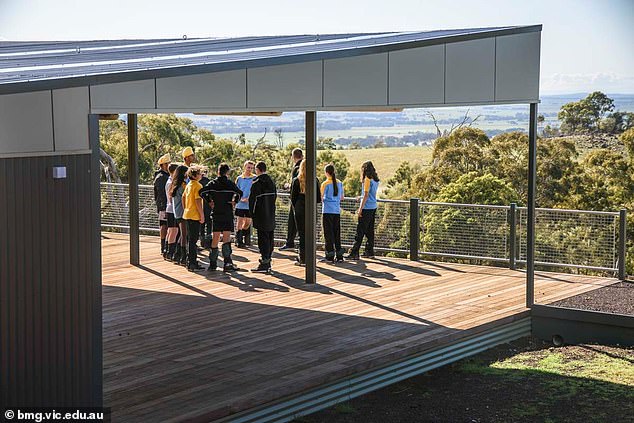 Recent cases from Bacchus Marsh Grammar (pictured) came from a staff development day that saw 315 personnel in attendance. Thousands of students might have been exposed

Multiple new exposure sites in Victoria are now categorised as ‘tier 1’, meaning anyone who has attended them in the specified time must get tested immediately and then quarantine for 14 days.

Despite the rise in case numbers, health authorities insist they are on a ‘good trajectory’.

Chief Health Officer Brett Sutton said while Victorians needed to ‘ready themselves’ for what could emerge leading into Monday.

‘We just need to brace ourselves for any possibility,’ he said at Saturday’s press conference.

‘The response couldn’t have been better … that’s got us on a good trajectory and it is, without question, a better situation than would have been the case without a lockdown.’ 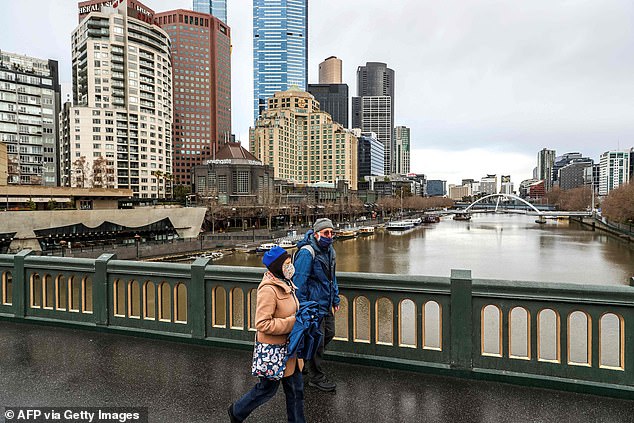 Melbourne residents cross the bridge over the Yarra River on the first day of a five-day lockdown. Hopes of life returning to normal ahead of schedule have suffered a setback with the news the Indian Delta variant is spreading throughout the state

Saturday’s figure of 19 cases was almost double the 10 diagnosed on Friday as the Delta strain began spread in Melbourne after infected removalists passed through.

There were 54 active cases across the state, but this includes patients diagnosed in hotel quarantine and from interstate.

Three Victorian schools and one university are the state’s latest Covid outbreak hotspots with hundreds of staff and thousands of students potentially exposed to the highly-infectious Delta strain.

It comes as positive cases have been recorded in Ballarat and Phillip Island – both located more than 100km from Melbourne.

Trinity Grammar in the inner-eastern suburb of Kew has seen three teachers test positive, as has a family member of a senior student at Ballarat’s Clarendon College.

A professor at Geelong’s Deakin University has also tested positive.

A leading epidemiologist at the University of Melbourne said Victoria will need a lot of luck for the five-day lockdown end on Tuesday as the list of exposure sites surged to 155 on Friday night and the official number of cases hit 26.

‘I am concerned by the pace of this outbreak – Delta moves fast,’ Professor Nancy Baxter told the Herald Sun.

‘We would be very lucky to get out of lockdown on Tuesday… and Melbourne has not had much luck.’

A state minister told the Herald Sun it would be ‘ambitious’ to think Victoria would be out of lockdown after the five-day period, saying they would need ‘everything to fall our way’ for it to end on Tuesday.

Large exposure sites in the CBD such as the Young & Jackson pub and the MCG are also fuelling concerns the virus has spread significantly.

There is a confirmed case in Cowes on Phillip Island with a growing list of exposure sites sending hundreds of residents to overstretched testing clinics and dashing hopes that the regions would have an early release from lockdown.

Anyone in attendance on exposed times must immediately get tested and isolate for 14 days regardless of the result. Several other venues on the island have been listed as Tier 2 sites. 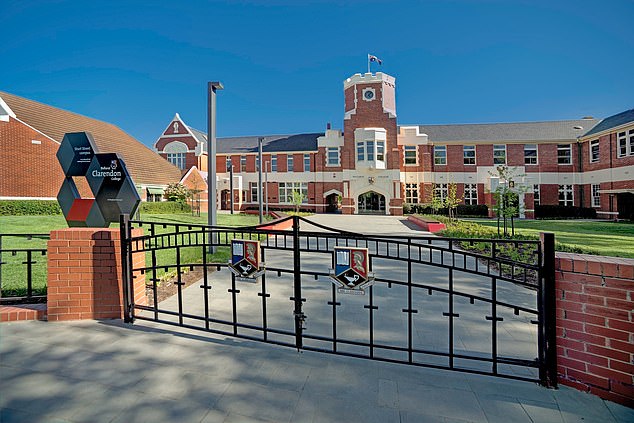 Ballarat Clarendon College principal David Sheppard sent an email to staff and parents on Friday morning saying the family member of a senior school student had tested positive and that they were awaiting further advice from the Government.

‘We will provide information to our community as required, and as directed as soon as it becomes available,’ Mr Sheppard said in the email.

‘It is our collective responsibility to follow the advice and guidance of health experts.

‘This is obviously an unsettling time for us all but particularly the Clarendon family as they navigate the next few days.’

The latest cases from Bacchus Marsh came from a staff development day that saw 315 personnel in attendance.

All four of the Covid-positive teachers are based at the Maddingley Middle/Senior School, with the campus designated as a Tier 1 site.

Principal Andrew Neal sent a letter to parents on Monday confirming the infected teachers had been in contact with their children. 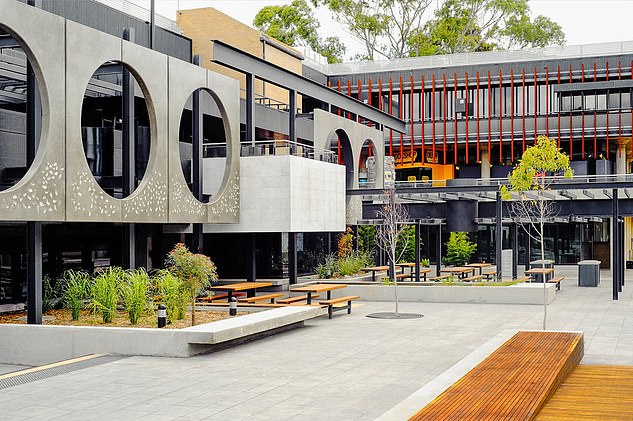 ‘Unfortunately, some of the recently infected staff have been in direct contact with students,’ the letter obtained by the Herald Sun reads.

‘The earlier advice that all students should stay at home and isolate still applies and we will update you with further advice as we are provided it,’ he added.

‘We currently have a significant number of staff tests back but given the size of the school we are still obviously waiting on a number from yesterday.’

‘Based on our understanding of the staff member’s movements, Deakin has temporarily closed buildings IC, IB and JB for deep cleaning. The staff member was not involved in any teaching activity while on campus,’ Professor Iain Martin said.

‘We have identified a small number of close contacts on campus and have already advised those people to isolate and get tested.

‘However, if you were at the Waurn Ponds campus on Wednesday 14 July, anytime between 9am and 3pm, I urge you to watch and follow the advice of the Department of Health and Human Services.’ 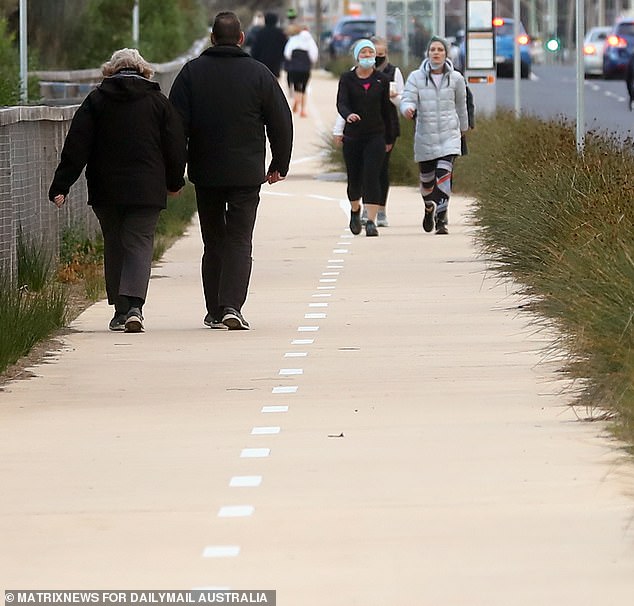 Earlier on Friday, Premier Dan Andrews took a swipe at his NSW counterpart after positive cases from Sydney brought the virus back to Melbourne.

The Victorian Premier said he understood the frustration among Victorians as they began their first day of a five-day long lockdown to curb the spread of the ‘Sydney incursion’.

‘I know and understand that this is not easy,’ he said. ‘No-one wants to be locked down.

‘But we had no choice and these additional cases overnight and particularly some of the context of these cases I think confirm for all Victorians that we had to make that tough call.’ 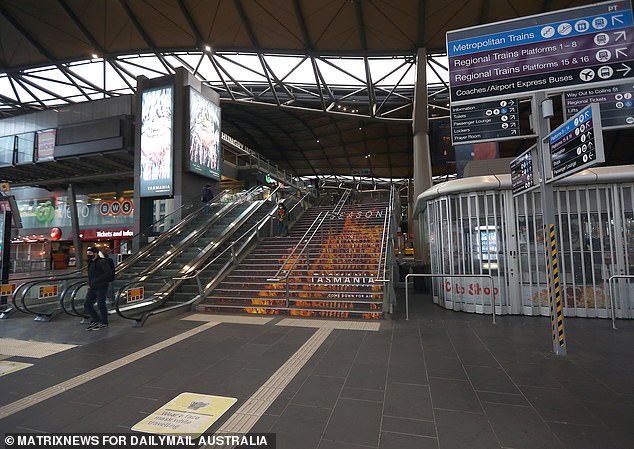 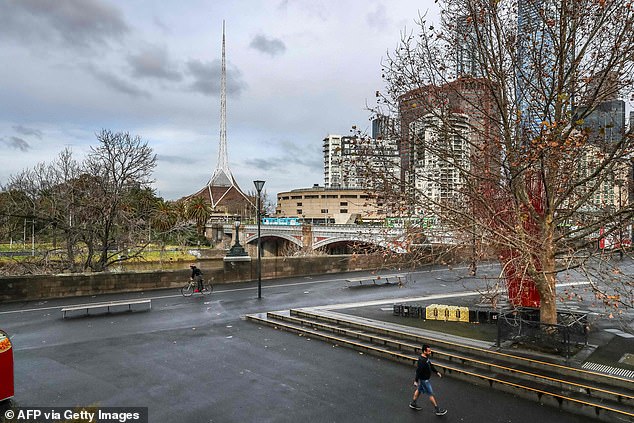 A deserted Melbourne as the city began its first-day of lockdown on Friday, which is scheduled  to end at 11.59pm on Tuesday

Mr Andrews claimed it was better to suffer through a short lockdown than a prolonged one – in a subtle dig against NSW Premier Gladys Berejiklian who has been forced to extend restrictions across Greater Sydney until at least the end of July.

‘We have done it before and we have done before with the Delta variants,’ he said.

‘We are all working as hard as we possibly can to make this as short a lockdown as possible, five days.

‘That is certainly better than five weeks or five months.’

On June 26, Ms Berejiklian introduced a two week lockdown in Greater Sydney after more than 80 cases were linked to an outbreak of the Delta variant of the virus.

The lockdown has since been extended with the virus running rampant in southwest Sydney and the state recording a staggeringly high number of cases each day – peaking at 112 on Monday.

Mr Andrews, on the other hand, plunged his state into lockdown despite Victoria recording just a handful of cases.

On Friday, only ten cases were reported – but four of them were already announced on Thursday.

There are now 26 cases linked to the outbreak with 1,500 close contacts and 5,000 secondary contacts identified. 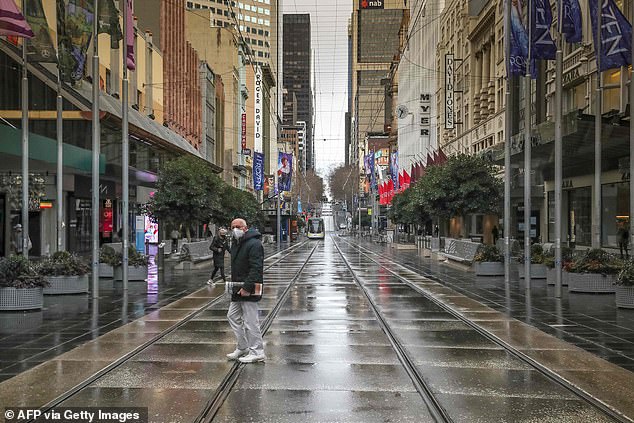 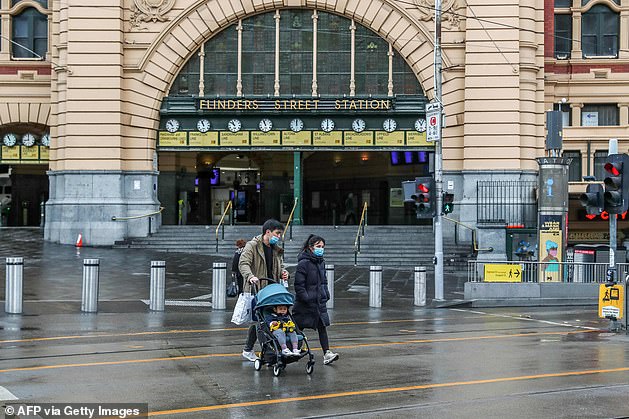 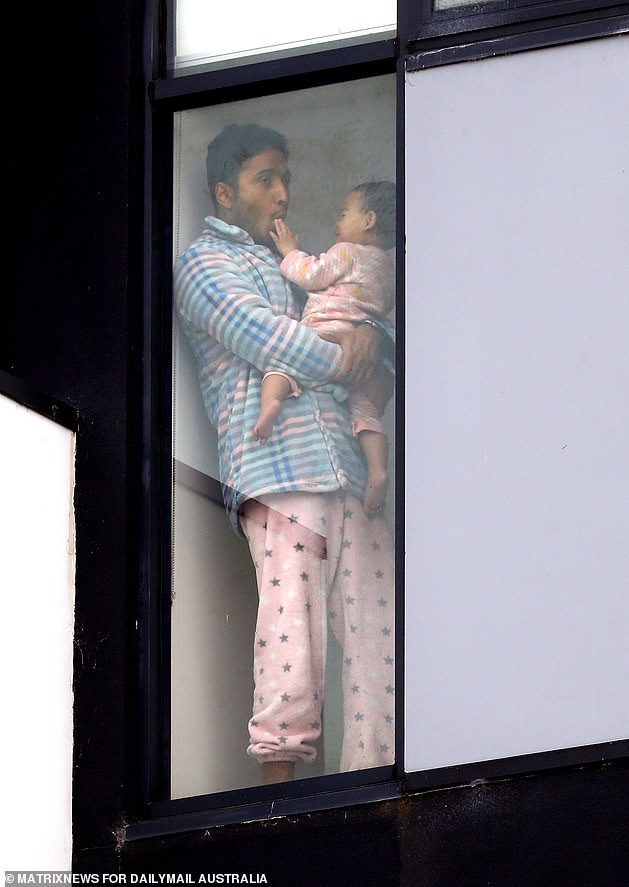 The entire 78 apartment complex was plunged into a two week long lockdown after it was revealed two Covid-19 positive removalists from Sydney had carried furniture throughout the building last Thursday.

In a welcome reprieve, Prime Minister Scott Morrison announced a newly-introduced $600 relief payment from the Federal Government for hard-hit Victorians.