New way to wipe out lifelong phobias – in just one session

Listening to birdsong, feeding the ducks, watching robins hop about in the garden, simple pleasures for many of us, but for Alisa Youngman it was enough to make her freeze with terror.

‘I’ve been absolutely terrified of birds all my life,’ says Alisa, 26, who lives with her parents in Beverley, East Yorkshire, and runs her own dog-grooming business.

‘It was totally irrational — big birds like swans and geese scared me, as did tiny little birds such as sparrows. If I saw a bird when I was outside I’d freeze in fear and if it got close to me I’d scream. Sometimes I’d shake too and struggle to breathe.’

Alisa Youngman, 26, from Beverley, Yorkshire, has been terrified of birds all her life

Alisa’s bird phobia was so intense that she would be on the look-out for them whenever she left the house. ‘I’d never eat outside or go to the park in case a bird swooped down on me,’ she says.

Yet recently she has been able to enjoy picnics and has even fed the pigeons in St Mark’s Square in Venice — having undergone a new treatment for phobias and other forms of anxiety, called brain working recursive therapy (BWRT).

Not only is it said to be quicker than existing treatments, practitioners say it can work after a single session, and crucially it does not involve any exposure to the source of the phobia itself.

A phobia is a deep-seated irrational fear and around one in seven people in this country has one. Ornithophobia, or a phobia of birds as Alisa had, is one of the most common, according to the charity Anxiety UK. The actress Scarlett Johansson is reported to have it. 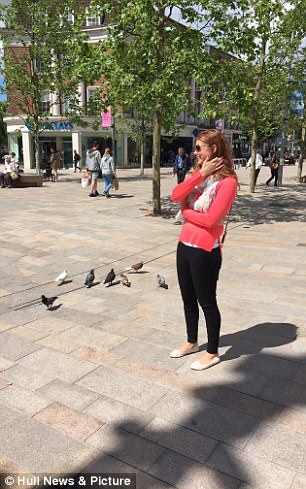 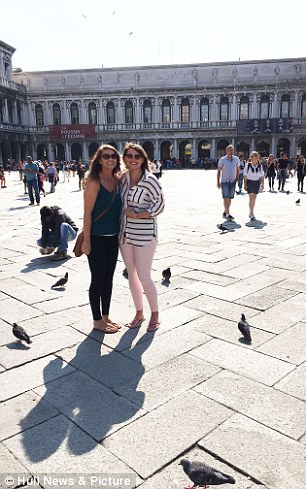 Recently she has been able to enjoy picnics and has even fed the pigeons in St Mark’s Square in Venice — having undergone a new treatment for phobias and other forms of anxiety, called brain working recursive therapy (BWRT)

‘People can get phobias of anything which they perceive they will be unable to control,’ says Terence Watts, a psychotherapist based in Brentwood, Essex, who developed BWRT.

Facing a phobia can trigger a ‘fight or flight’ response. As a result the body pumps out adrenaline and other chemicals leading to, for example, heart palpitations, shortness of breath, jelly legs, feeling faint, sweating, tingling fingers, nausea and a dry throat.

‘It is essentially a form of anxiety that for some can become debilitating,’ says Dr Jane McCartney, a chartered psychologist who practises in South London.

‘Often the fear is rooted in some past traumatic experience.’

Alisa’s phobia started at the age of three when her grandmother let her pet budgie out of the cage and it flapped around the room, making Alisa scream in terror.

‘I couldn’t remember the incident, but according to my family I screamed the place down as the budgie flapped its wings around my head,’ she recalls.

The typical approach to treating a phobia is called graded exposure. A psychologist talks about the subject of the phobia and gets their patient to rate how they are feeling from one to ten. ‘The patient is then gradually exposed to their fear — for example if it’s a fear of birds then they are encouraged to look at pictures and then they are exposed to a live bird,’ says Dr McCartney.

‘They learn through experience that they are safe and so anxiety levels reduce.’

Yet it doesn’t work for all: Alisa among them. Three years ago her GP referred her for graded exposure combined with cognitive behavioural therapy (CBT) — where patients are encouraged to change their responses to a situation.

‘My therapist would take me to the park to feed the pigeons and she would remind me that I could change my response and act differently. It was very gradual but I still froze when I saw a bird.’ 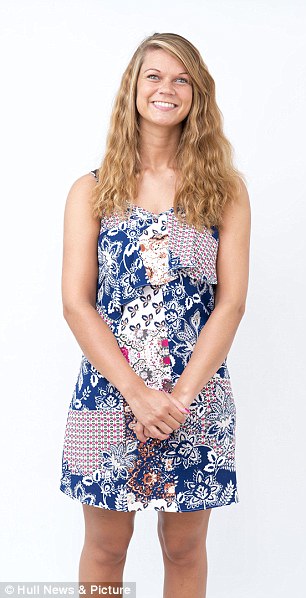 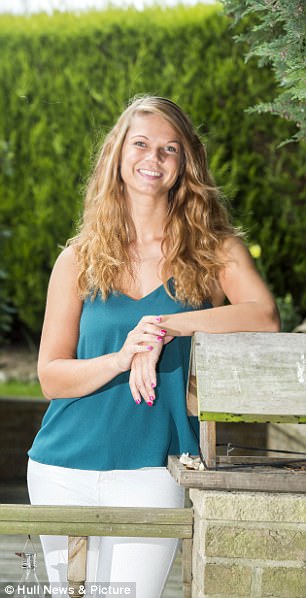 Alisa’s phobia started at the age of three when her grandmother let her pet budgie out of the cage and it flapped around the room, making Alisa scream in terror

For the next three years Alisa avoided birds. ‘I think people thought I was weird when I told them I couldn’t sit outside for a drink or a meal because of the birds — it was starting to take hold of my life,’ she says.

It was Alisa’s father who in 2016 heard about BWRT from a friend.The therapy works on the hind brain, the part of the brain that controls the fight or flight response we experience when exposed to danger, says Terence Watts.

‘Sometimes referred to as reptilian brain, the hind brain controls systems that don’t require conscious thought such as breathing, perspiration, heart rate and liver and kidney function as well as the hormone system,’ he says.

‘If it recognises a pattern such as a fear or phobia it automatically prompts the release of hormones such as adrenaline when the trigger is encountered.

‘BWRT therapists encourage their clients to create an artificial freeze response — literally visualising the traumatic memory or source of fear in a freeze frame and then stop their responses to it in its tracks, by repeating the freezing action.

‘They are then invited to replace their past response with a different emotion — it has to be realistic — someone in their 70s who is scared of water is not going to suddenly become an Olympic swimmer,’ he adds.

‘For some phobias one session is all you need. It’s extremely popular with patients because they don’t have to expose themselves to the subject of their fear as they do in other psychological therapies.’ Terence Watts says BWRT works because the hind brain doesn’t differentiate between reality and imagination, so its reaction can be reprogrammed.

Around 170 therapists are trained in the technique in the UK and it is now being evaluated in a small NHS scheme in Lincolnshire. ‘My biggest problem has been convincing other therapists this can work so quickly,’ says Mr Watts.

Anne Abey, a chartered psychologist and head of physical health psychology at Lincolnshire partnership NHS foundation trust qualified as a BWRT therapist a year ago and found it so helpful she encouraged four colleagues to train in it, too.

‘It’s very effective and powerful,’ she says. ‘We have used it on patients with various sources of anxiety including a fear of medical and dental procedures, or stress reactions from past traumas.

‘The advantages are that it doesn’t require a lengthy course of treatment like some psychological therapies, so it’s cost effective.’

However although there are many anecdotal reports of how successful BWRT is, at present there is a lack of published scientific evidence.

‘That’s why we have a doctoral student working with us who is going to evaluate our BWRT,’ says Anne Abey. ‘If we have a greater research base for the treatment then maybe it could be used within the NHS.’

Treatment is available privately at a cost of £60 to £100 for 1½ to 2 hours. ‘I would want to see more evidence of BWRT and its clinical effectiveness before our organisation could recommend it,’ says Nicky Lidbetter, chief executive officer of Anxiety UK.

‘Cognitive behavioural therapy is the gold standard for treating anxiety, but it is not a panacea and doesn’t work for everyone. Also not everyone has the time to commit to a course of therapy. It can take 12 to 20 sessions for a patient with high level anxiety. Waiting lists for NHS treatment can be long, too.

‘If BWRT has worked for some patients that’s great and we keep an open mind, but we need to see the evidence.’

For Alisa at least, a 90-minute Skype session with BWRT therapist Bob Bees who practises in Eastbourne, Sussex, in February this year was enough to cure her of the bird phobia.

‘I was sceptical that anything would be able to work so quickly. Especially as my previous attempt to overcome my fears through CBT had failed,’ she admits.

‘Bob asked me to freeze my worst memory of bird phobia and then think about how I would like to behave around birds in the future and keep repeating that feeling.

‘Afterwards I walked into town and there were pigeons everywhere and I was shaky and apprehensive, but I sent Bob a text, as arranged, telling him how I felt.

‘He replied saying it was just a habit and I had to think about how I wanted to feel around birds. I did that and it worked and I haven’t been scared since.’

Alisa has even been feeding birds on her mum’s garden bird table.

‘If someone had told me that a year ago I wouldn’t have believed them,’ she says.