The new White House press secretary has been in a long-term relationship and shares a daughter with a prominent CNN political correspondent, raising questions on whether the already ethical-challenged and scandal-scarred network can offer impartial coverage.

Karine Jean-Pierre, 44, who takes over from Jen Psaki on May 13 after serving as her deputy, is partners with CNN’s national correspondent Suzanne Malveaux, 55, and the pair share a seven-year-old daughter, Soleil.

And, while the trailblazing and historic nature of her appointment was being celebrated by many – Jean-Pierre is the first black woman and first openly gay person to do the job – others were alarmed by conflicts of interest.

The network has had to weather the firing of Chris Cuomo in December over his involvement in brother Andrew Cuomo’s sex harassment scandal and then two months later dumped network president Jeff Zucker over his secret romance with CNN co-worker Allison Gollust.

‘I’m sure there won’t be Cuomo-level conflict of interest violations but expect it to have it bought up in the future…’ he said.

Others quickly slammed the network.

‘This is one of many examples of the corporate media LITERALLY in bed with the government it covers,’ tweeted Alex Marlowe, editor-in-chief of Breitbart.

Jean-Pierre and Malveaux are pictured with their daughter Soleil, born in 2014 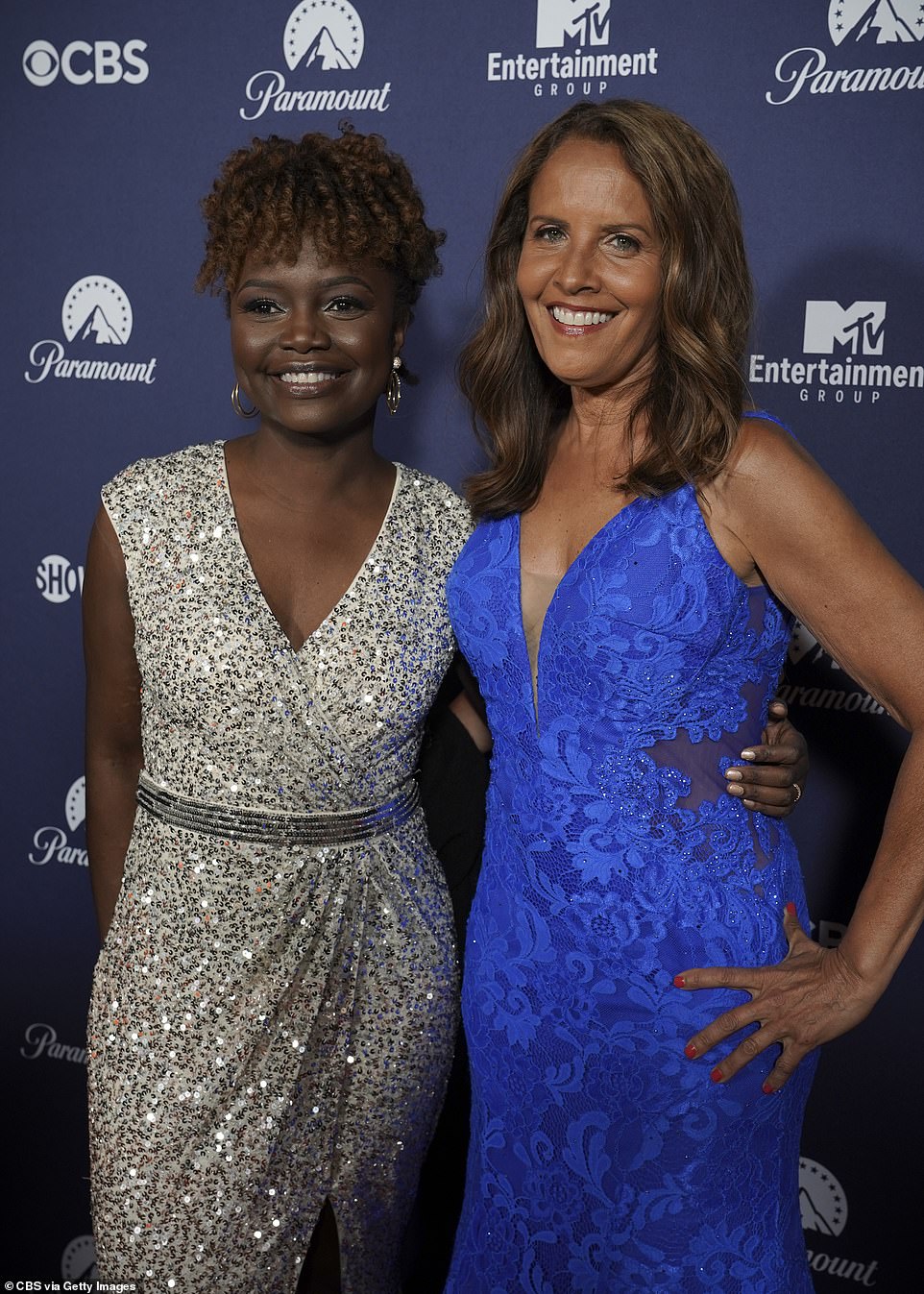 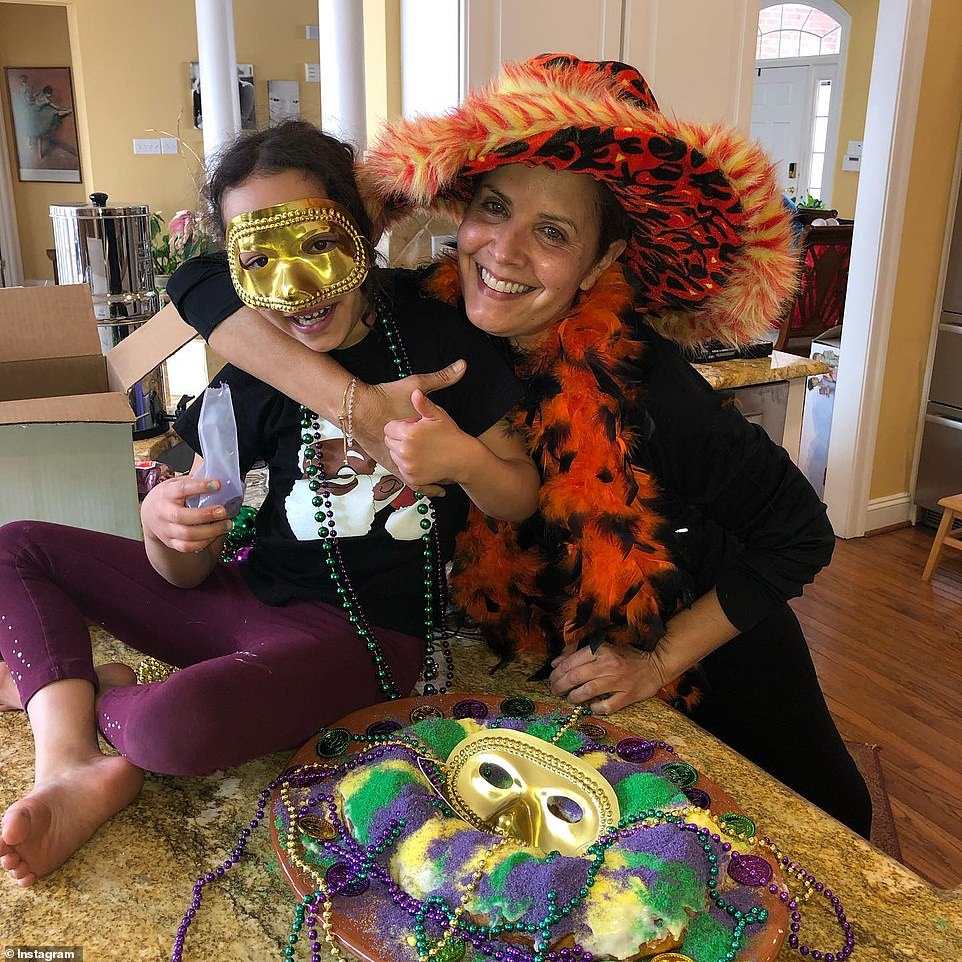 Malveaux is pictured with their daughter, Soleil, who was born in 2014. The pair are seen celebrating Mardi Gras

Another asked: ‘What is the name of the Universe where this is not a Conflict of Interest?’

Malveaux, who joined CNN in 2002, and Jean-Pierre are familiar faces on the DC scene – most recently attending the White House Correspondents’ Dinner together on Saturday night.

It is unclear how long they have been together, or how they met.

Jean-Pierre last year told her own story of coming out to her family, to mark Pride Month. 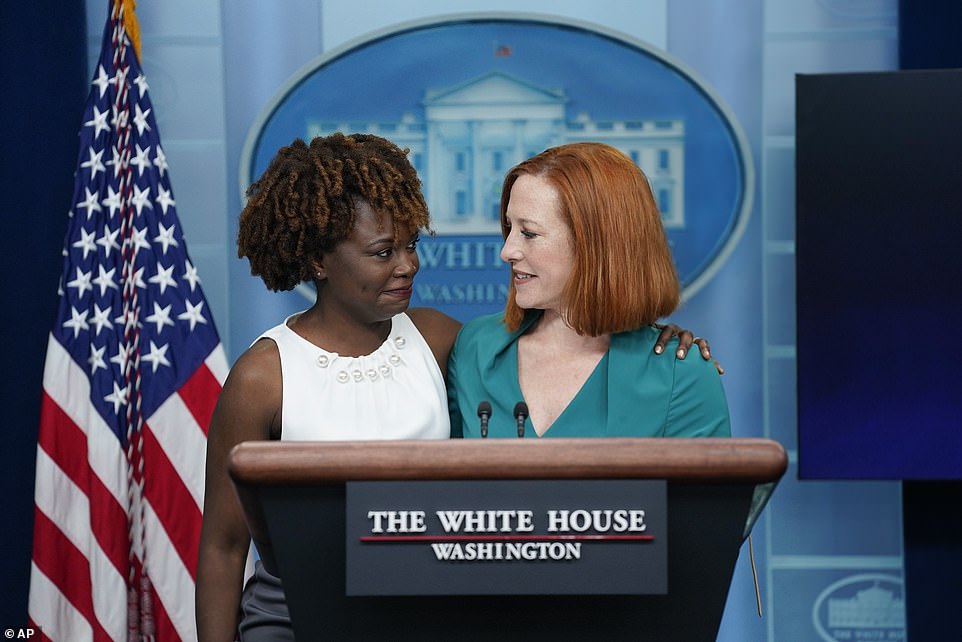 Jean-Pierre is seen with Jen Psaki on Thursday, as her new job was announced 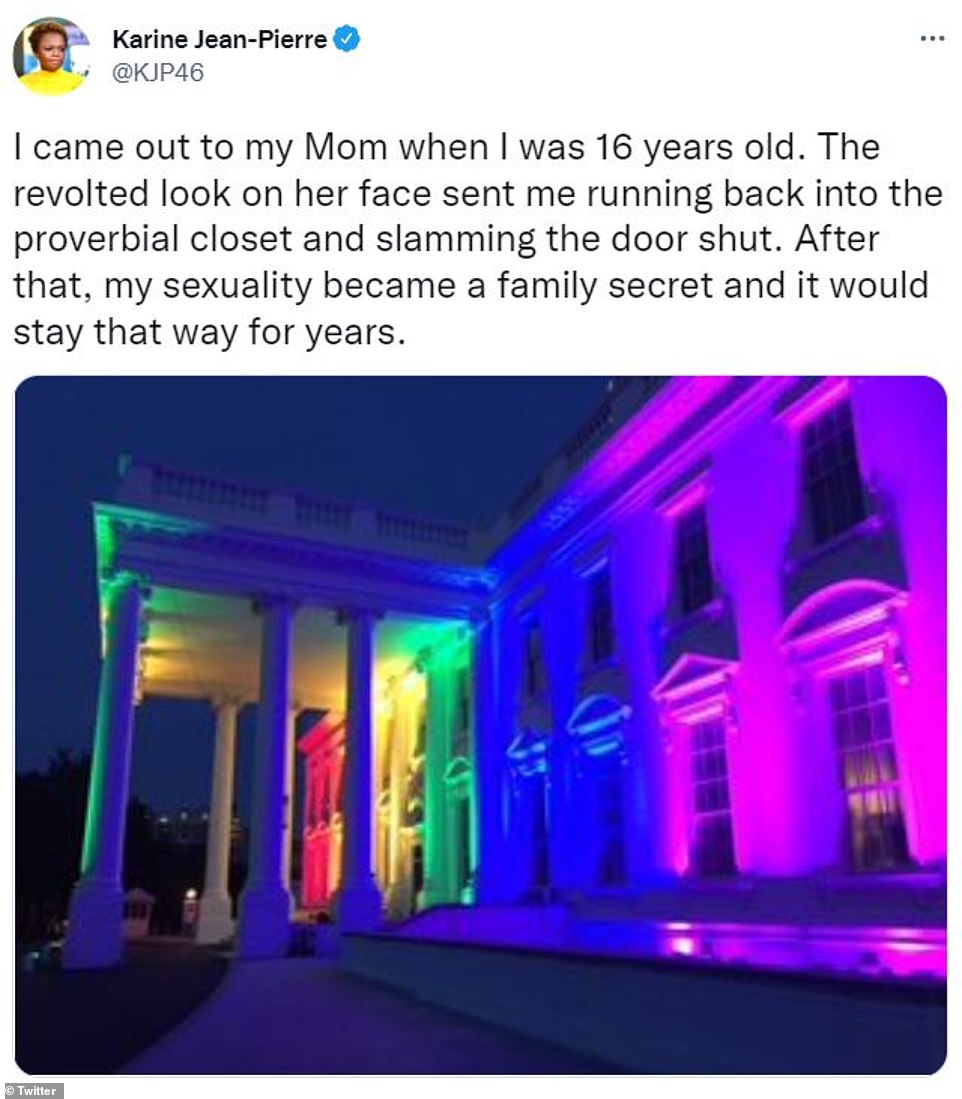 ‘The revolted look on her face sent me running back into the proverbial closet and slamming the door shut.

‘After that, my sexuality became a family secret and it would stay that way for years.

‘I dated, but I hid those relationships from my family.

‘Just as American society has evolved over the course of the past couple of decades to embrace the LGBTQ community (never forgetting we still have work to do), my family has evolved to embrace my membership in it.

‘I’m proud to be an out Black Queer woman and I have been for quite some time.

‘I’m happy to say, my Mother is now proud of ALL of who I am; she loves my partner and she loves being a doting grandmother to the daughter we are raising.

‘My journey towards feeling accepted by myself and loved ones wasn’t an easy one, but it was worthwhile.

‘No matter where you are in your journey, I see you, we see you and we celebrate you – Happy Pride!’

Jean-Pierre grew up in the New York borough of Queens, where the family moved when she was five. 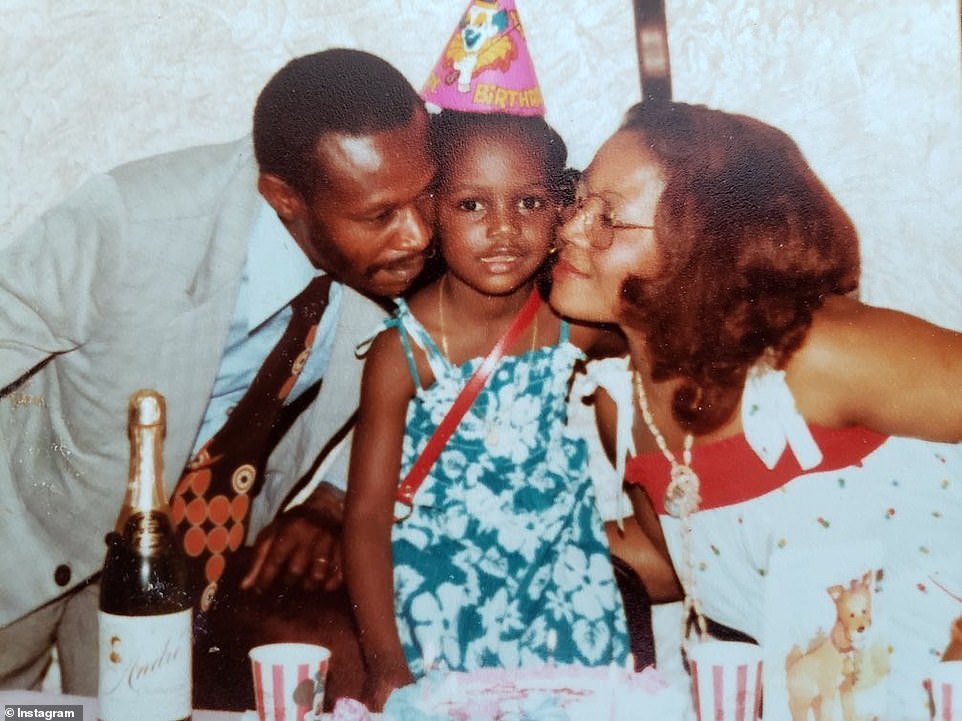 Born in Martinique, Jean-Pierre is pictured celebrating a birthday as a child. The family moved to Queens when she was five 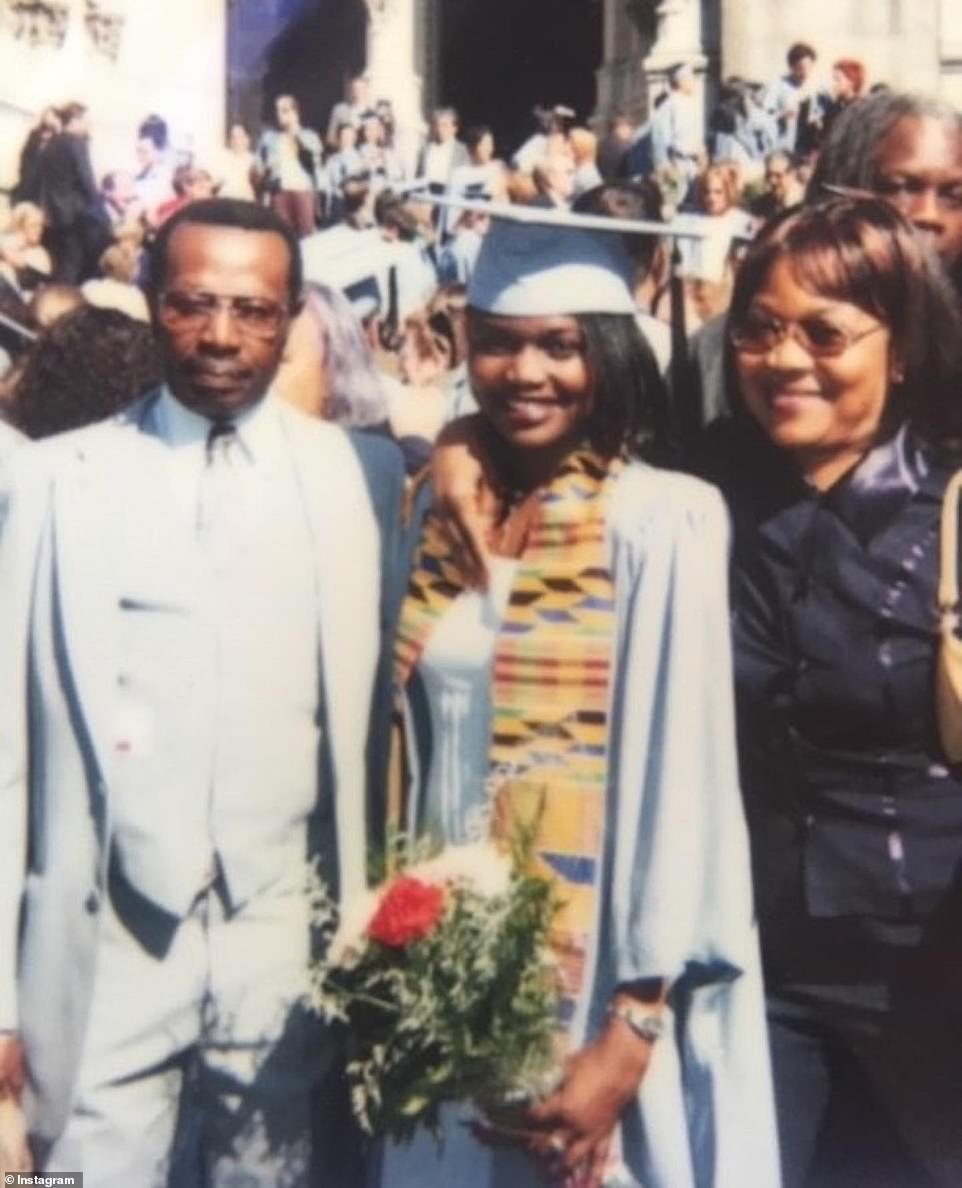 Jean-Pierre is pictured on the day of her graduation, in New York 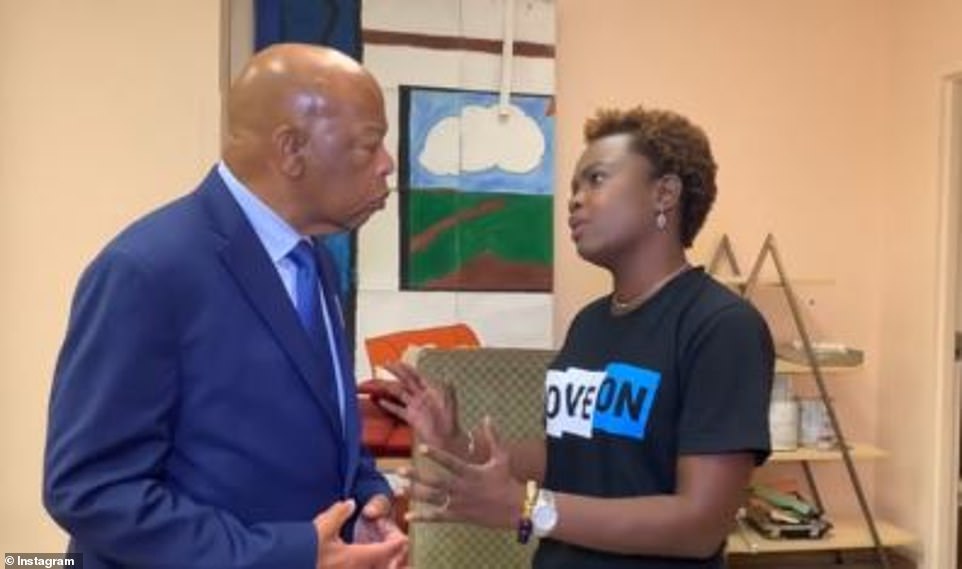 Jean-Pierre is pictured with John Lewis, the late civil rights leader, when she worked as an activist for Move On 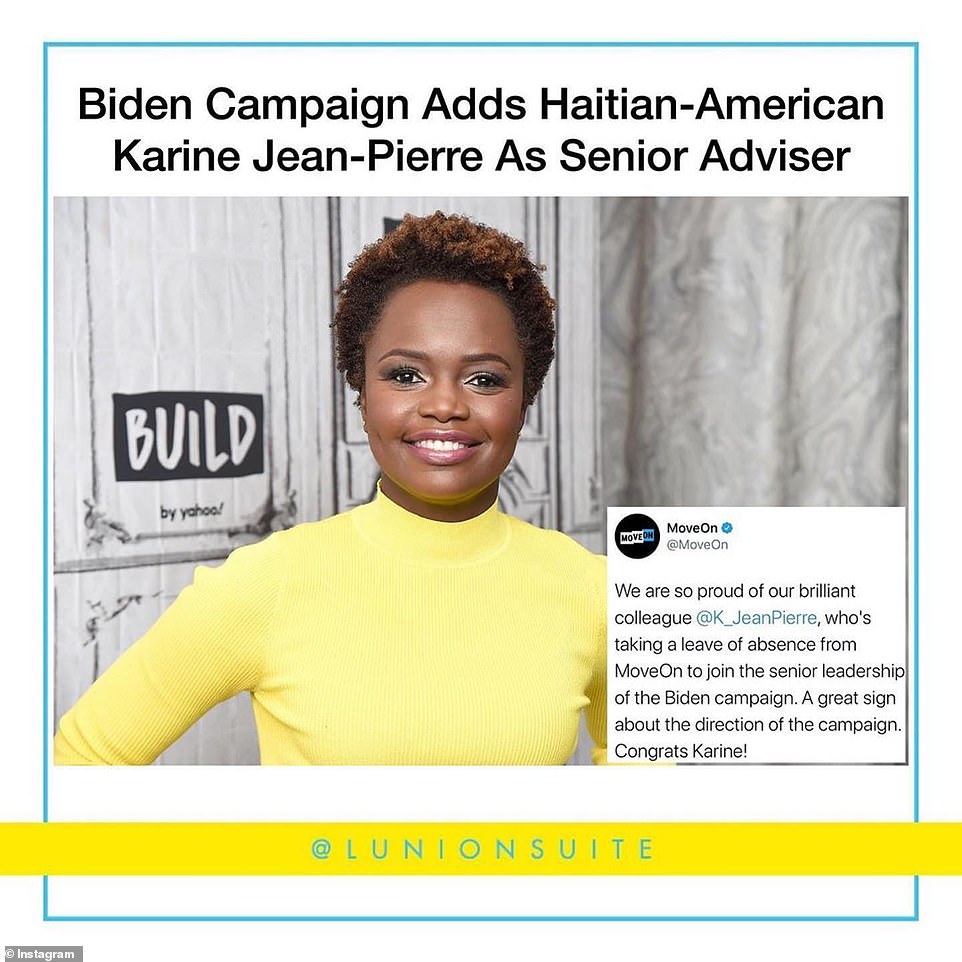 Both her parents were Haitian: her father was a cab driver and her mother was a health care worker.

She studied pre-med at New York Institute of Technology on Long Island, but failed to pass her exams.

In her 2019 book, she writes that that, coupled with struggling with her sexuality, led her to spiral into depression and attempt suicide – saved by her sister, who found her.

She then became a volunteer firefighter, and eventually landed a place at Columbia University’s School of International and Public Affairs.

Jean-Pierre has said she was never initially interested in politics – associating it, in her parents’ homeland, with corruption – but was mentored by David Dinkins, mayor of New York City from 1990 to 1993: the first black person to be mayor of the city. 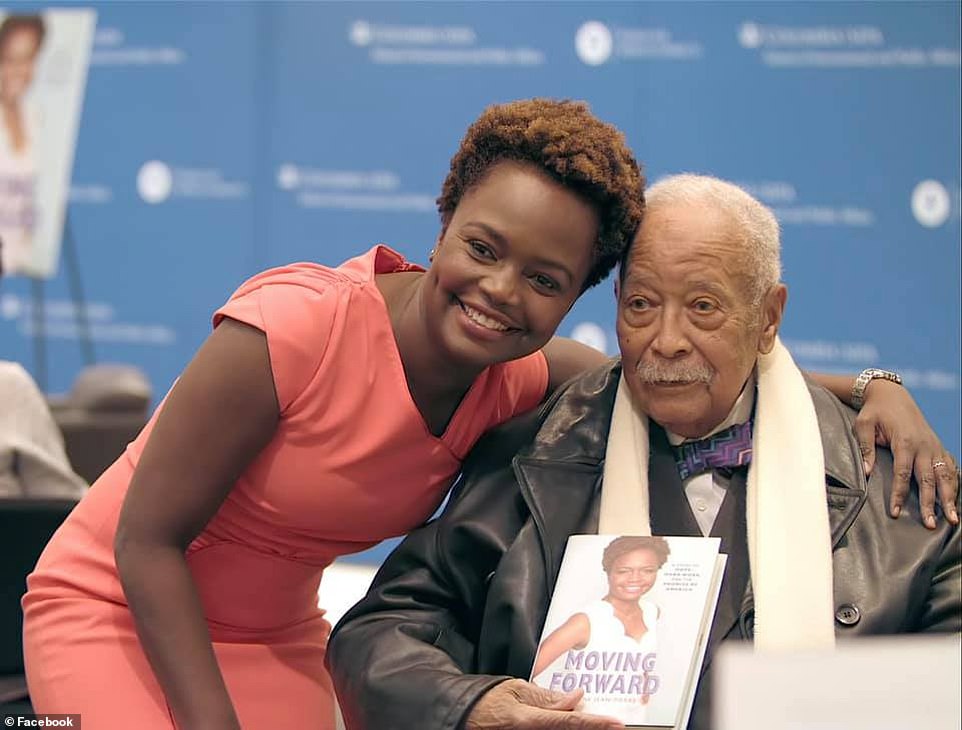 Jean-Pierre is seen with her mentor David Dinkins, the first black mayor of New York City. He is holding a copy of her 2019 book, Moving Forward 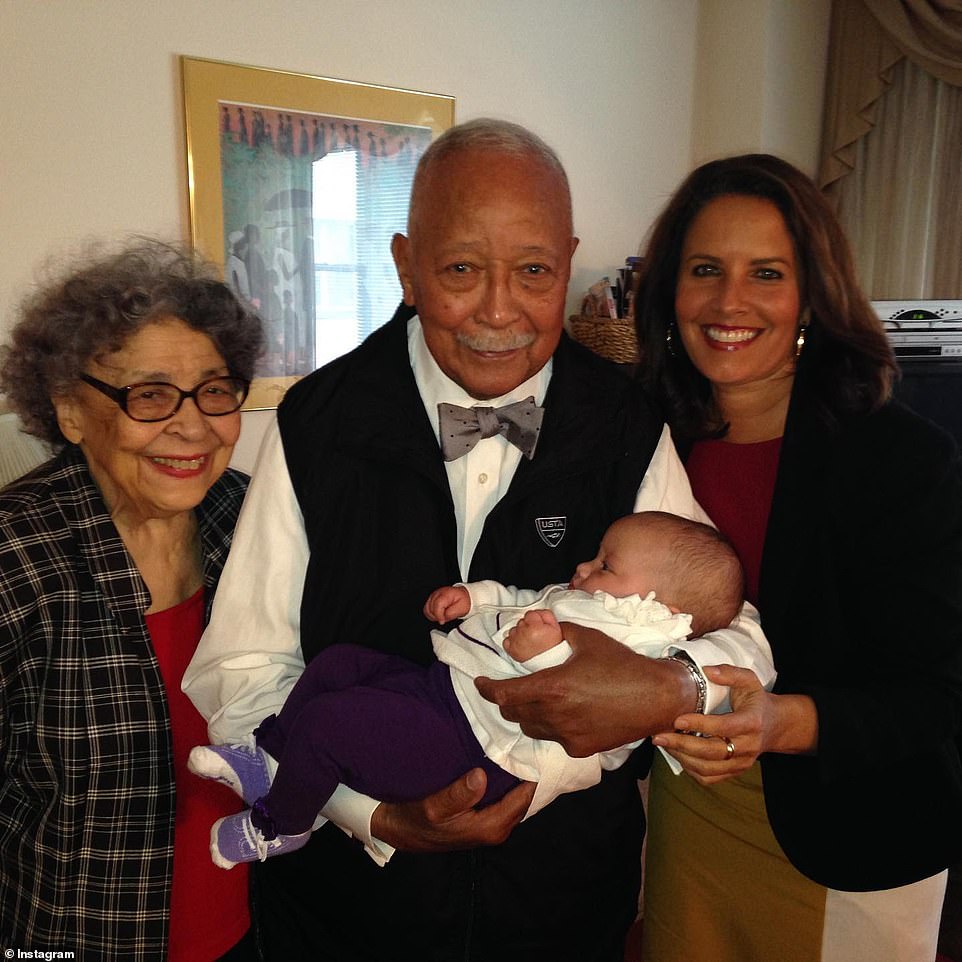 Dinkins is pictured with Soleil, Jean-Pierre and Malveaux’s daughter, who was born in 2014 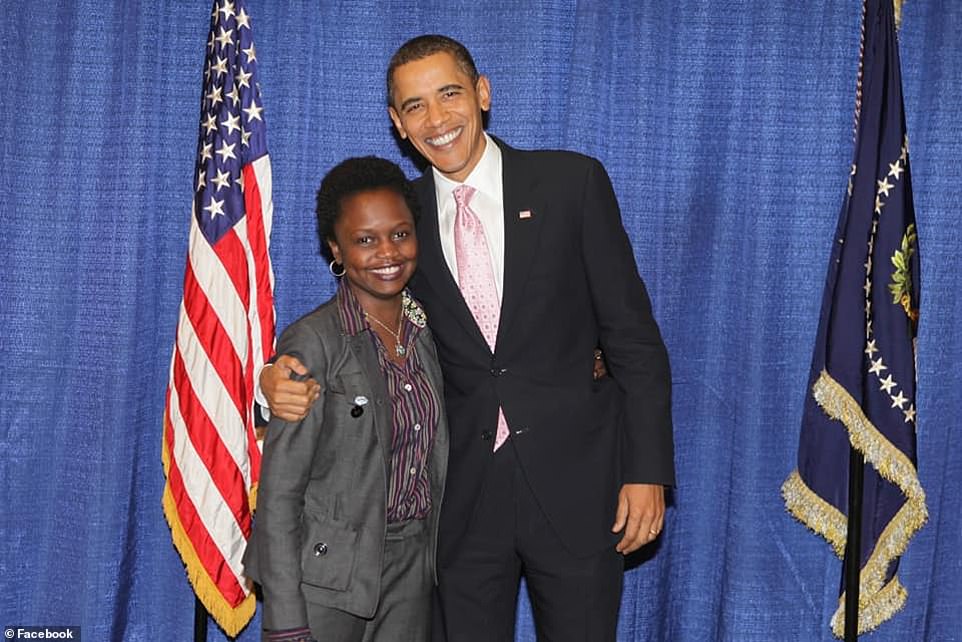 Jean-Pierre worked in local politics before getting involved on the national stage – first with John Edwards’ campaign, and then in 2008 with Barack Obama

She worked in New York City council before becoming involved in national politics – working on the John Edwards campaign during his 2004 presidential run, and then in 2008 as the political director for the White House Office of Political Affairs during the Obama administration.

Before joining the Biden presidential campaign, Jean-Pierre was the chief public affairs officer of the progressive group MoveOn.org and a former political analyst for NBC and MSNBC.

Biden offered the job to Jean-Pierre on Thursday in the Oval Office.

White House staffers were gathered after the offer and greeted Jean-Pierre with applause, an official said.

Two ‘warm bottles’ of champagne were procured for a toast in White House paper cups, the official added.

Jean-Pierre had occasionally taken the lectern in the press briefing room instead of Psaki, and more frequently held off-camera ‘gaggles’ with reporters when Biden was traveling on Air Force One. 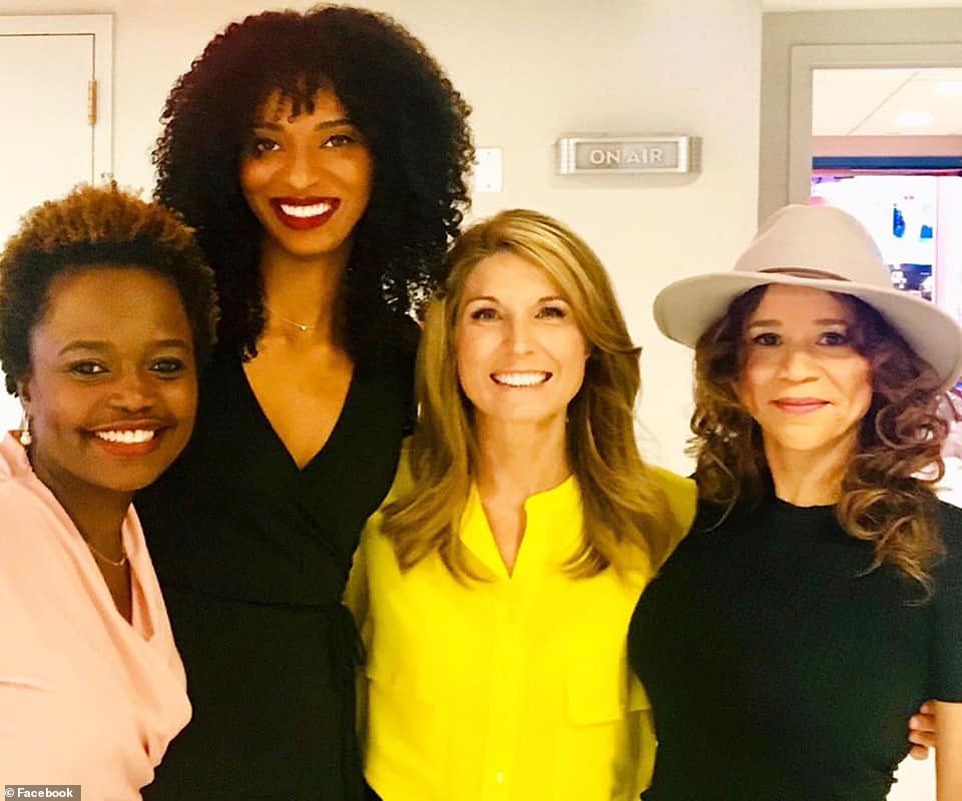 Jean-Pierre is pictured with MSNBC anchor Nicolle Wallace, in yellow 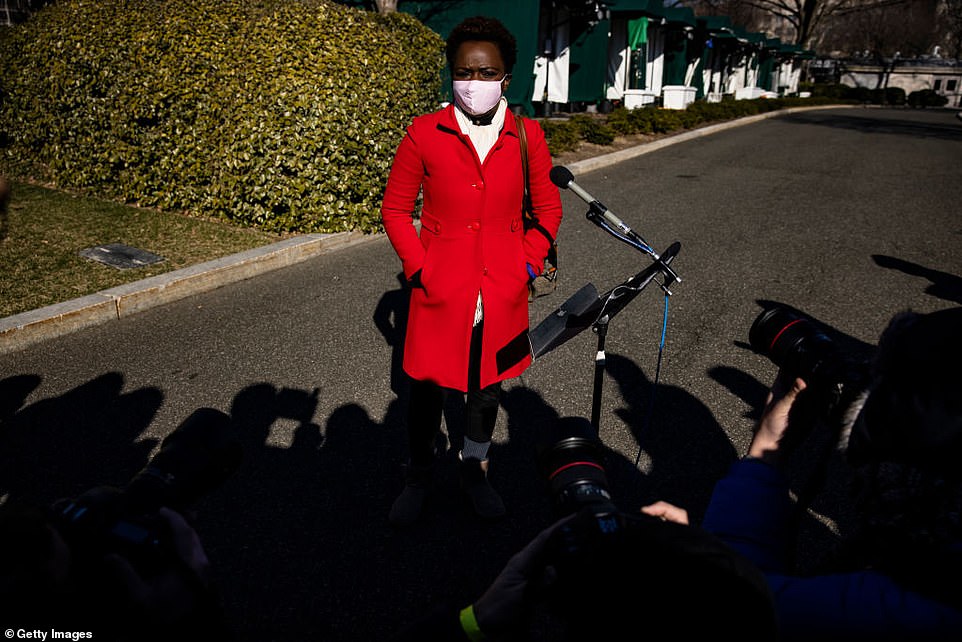 She traveled with Biden to Europe last fall and in March instead of Psaki, who had tested positive for COVID-19 before both trips.

Jean-Pierre takes on the role as the White House faces an uphill battle to help Democrats hold onto the House and Senate in this fall’s midterm elections, and as the administration struggles to address Americans’ concerns about soaring inflation and the state of the economy.

She also comes into the job as Biden faces a daunting array of foreign policy challenges, including the ongoing Russian invasion of Ukraine and North Korea’s escalating nuclear testing program.

Biden is set to visit South Korea and Japan later this month and Europe in June.

‘Karine not only brings the experience, talent and integrity needed for this difficult job, but she will continue to lead the way in communicating about the work of the Biden-Harris administration on behalf of the American people,’ Biden said in a statement.

He praised Jean-Pierre, who has served as his principal deputy press secretary since Inauguration Day.

Psaki, who leaves the White House on May 13, described her successor as a ‘partner in truth,’ noting the significance of the history-making appointment.

‘Representation matters and she is going to give a voice to so many and show so many what is truly possible when you work hard and dream big,’ Psaki said.

Taking the lectern briefly while Psaki briefed the press on Thursday, Jean-Pierre said she was ‘still processing’ the significance of her hire.

She called it ‘an honor and privilege to be behind this podium.’

‘This is a historic moment, and it’s not lost on me,’ she said. ‘It’s a very emotional day.’