The alarm that tells you it’s time to go to the loo! New wireless device sends phone alert when bladder gets full

A device that sticks to the tummy and can tell when the bladder is nearly full could help people with incontinence.

The gadget, about the size of a matchbox, beams ultrasound waves into the abdomen to detect when the bladder is expanding, then sends a message to an app on the patient’s phone, telling them to go to the loo to avoid an accident.

The £400 gadget, called Dfree, is aimed mainly at those who have incontinence due to urinary retention, where the bladder becomes stretched from being full much of the time. But it could potentially help all incontinence patients keep an eye on bladder control.

The device should become available in the UK within two years.

Game-changer? The £400 gadget, called Dfree, is aimed mainly at those who have incontinence due to urinary retention, where the bladder becomes stretched over time

When the bladder is just over half full, muscles in its wall usually send a message to the brain, which then tells us we need to urinate while at the same time telling the bladder to hold on until the appropriate moment.

However, holding on for too long stretches the bladder and interrupts the signals from muscles in the bladder wall that tell the brain it is time to go.

The weakened bladder muscles — due to advancing age, for example — also prevent it emptying fully, leading to frequent small leaks that sufferers do not feel coming. The stick-on monitor uses the same technology as an ultrasound machine used to scan babies in the womb during pregnancy.

It analyses the pattern of soundwaves as they bounce back from the bladder and uses the information to work out how full it is.

If the bladder was empty, the waves would bounce back in a straight line. But when it is expanding and becoming rounder, the waves return at different angles.

The device comes with ultrasound gel that is rubbed on the skin to help the transmission of soundwaves into the body. Patients secure it with medical tape to the skin between the navel and the top of the pubic area, and wear it all day. 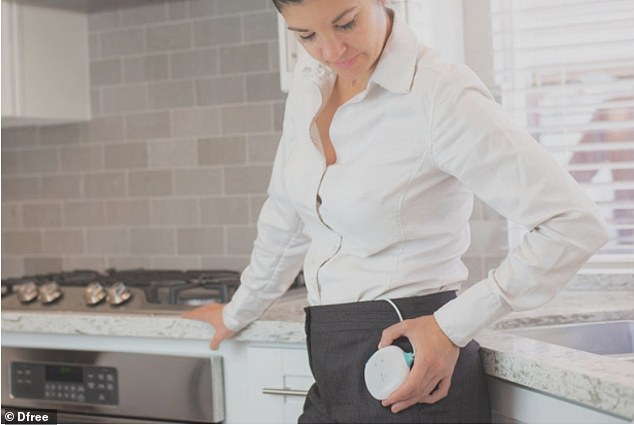 Innovative: The stick-on monitor uses the same technology as an ultrasound machine used to scan babies in the womb during pregnancy

It’s attached by a lead to a small battery-powered monitor clipped to the patient’s waistband, which contains a computer chip to process the data fed through from the ultrasound device.

A 2018 study in Annals of Emergency Medicine showed ultrasound is an effective way to measure how full the bladder is. Researchers at Columbia University in New York used soundwaves — although not the Dfree device itself — to monitor urine content in the bladders of more than 100 women, and found scans every 30 minutes allowed them to measure fullness.

Marc Laniado, a consultant urologist at Frimley Health NHS Trust, in Surrey, says: ‘Our bladders can become stretched over time and nerves in the bladder wall no longer respond as they should.

‘It’s partly age-related but holding on for too long can also make it worse. This device could help some, but most people with incontinence will not benefit from it as they tend to go very often, rather than too little.’

MEANWHILE, yoga may help women with incontinence, according to a study at Loyola University Chicago. Twelve women went to gentle yoga classes twice a week and had their incontinence symptoms monitored.

After two months, all but three of the women reported reduced symptoms — along with improved quality of life, depressive symptoms and sleep quality, reports the journal Female Pelvic Medicine & Reconstructive Surgery.

One theory is that yoga may strengthen the pelvic floor muscles that help women gain control of involuntary leaks.