Reporters will be the guests of honor at the New Year’s Eve party in New York’s Times Square on Monday, in what organizers said was a celebration of press freedom after an unusually deadly year for journalists at US news outlets.

Two attacks in particular weighed on organizers as they discussed in autumn whom to give the honor of initiating the ceremonial ball drop just before midnight, according to Tim Tompkins, president of the Times Square Alliance.

One was the killing of Jamal Khashoggi, a Saudi columnist for the Washington Post and US resident, inside a Saudi Arabian consulate in Turkey.

The other was the mass shooting in June in the newsroom of The Capital Gazette, a newspaper in Annapolis, Maryland, in which five employees were killed.

Monday’s New Year’s Eve celebration in Times Square will be dedicated to journalists, organizers of the iconic event  announced this week

‘Throughout the year it’s been a big issue,’ Tompkins said in an interview. ‘Times Square itself is the ultimate agora and public space,’ noting that the area was named after the New York Times, and that it was a Times publisher, Adolf Ochs, who began the tradition of the ball drop in 1907.

‘On New Year’s Eve we look back and reflect on the major events of the past year, we look forward with a sense of hope, and we celebrate the people and things we value most,’ Tompkins said.

‘This year, we’re celebrating the free press and journalism and those who work to protect, preserve and practice it.’

Joel Simon, executive director of the Committee to Protect Journalists, said the Times Square Alliance approached his group because of ‘the perception that the journalism and journalists in particular are under threat and their role is being questioned.’

Simon, who said he usually spends New Year’s Eve playing Scrabble with his wife in New Hampshire’s White Mountains, will be in the spotlight at the Times Square festivities, joining Mayor Bill de Blasio to launch the ball drop a minute before midnight. 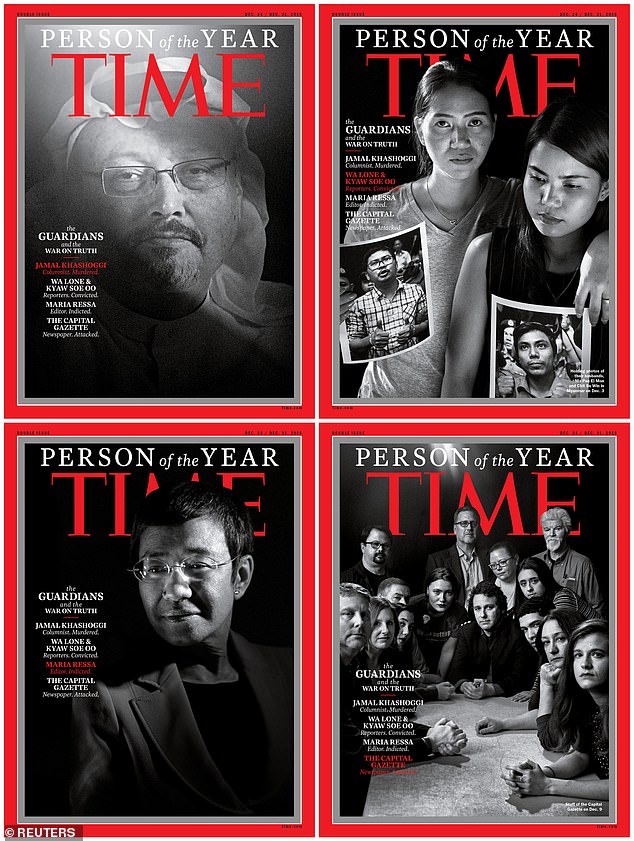 Simon will be joined onstage by an array of journalists from US and international news outlets. The names were still being finalized on Friday, the Times Square Alliance said.

The Times Square Alliance contacted Simon in November, Simon said, several weeks before Time magazine would devote its annual ‘Person of the Year’ issue to several prominent journalists who have faced attacks and hostility.

Among those journalists were Khashoggi, and Wa Lone and Kyaw Soe Oo, two Reuters reporters imprisoned by Myanmar for investigating how the country’s security forces killed members of the country’s Muslim Rohingya minority.

President Donald Trump has become a vociferous critic of parts of the press, routinely chiding reporters and outlets he views as publishing ‘fake news,’ calling them ‘the enemy of the people’.

Simon said this was in the background of his discussions with the Times Square Alliance.

‘Unavoidably, Trump was the subtext, but not front and center,’ he said. ‘We wanted to have a unifying message.’