New York actress sheds half her body weight in 10 months

An actress who struggled with her size due to polycystic ovary syndrome has lost half her body weight in under a year after having a gastric sleeve fitted.

Despite having a sporty childhood of sports and dancing, aspiring performer, Gianna Sciortino, 20, from New York, grew up overweight and insecure.

Playing the role of Tracy Turnblad in Hairspray helped to boost Gianna’s confidence temporarily but after the show finished at 240lbs (17st 2Ibs) and a size 20 (UK 24), she felt depressed.

In June 2017, she decided to undergo the gastric sleeve surgery, where the stomach is shrunk to about 15 percent of its original size, by a surgical removal of a large portion of the stomach, helping to reduce appetite. 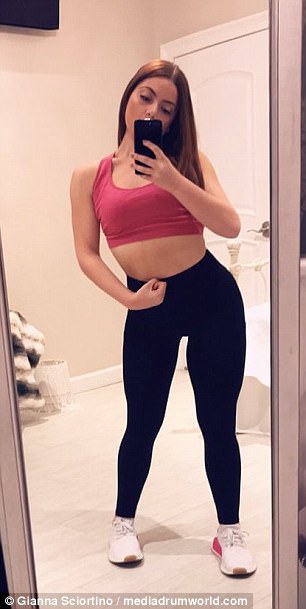 Gianna Sciortino lost half her body weight in ten months after having gastric sleeve surgery. Pictured: Before (left) and after weight loss

Since then she has become more confident in her own skin while progressing with her acting career.

‘My absolute dream in life is to be a performer. I have been involved in shows all my life. Even as a small child,’ Gianna said.

‘In the fall of 2016, I starred as Tracy Turnblad in Hairspray for a theatre company in New York. 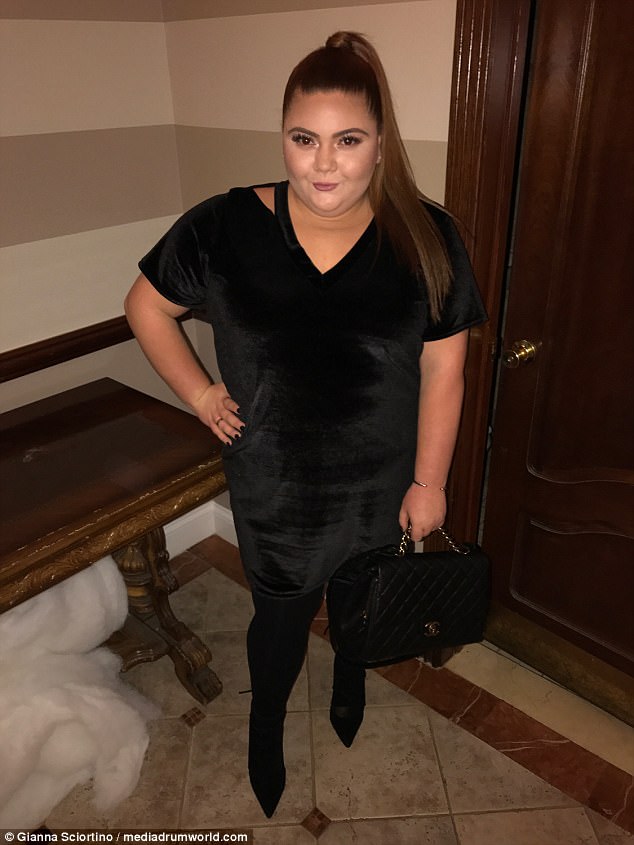 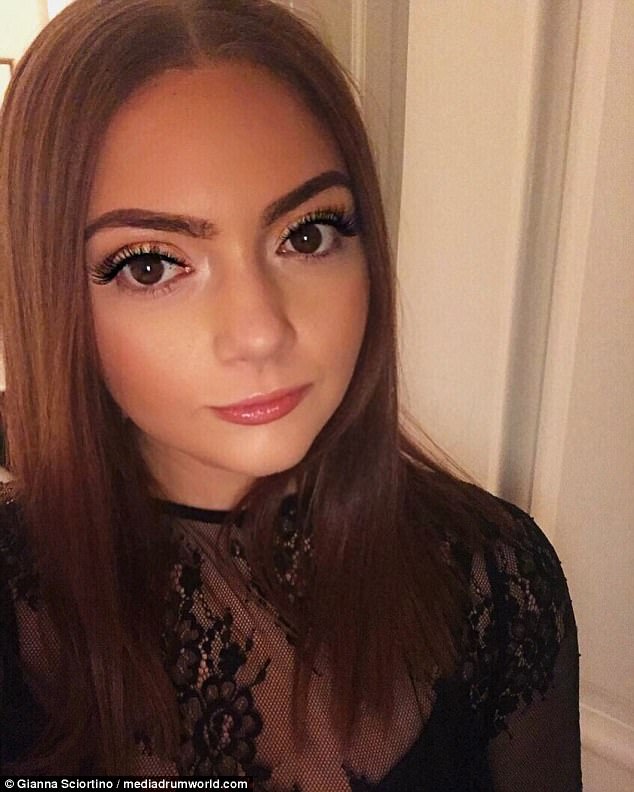 ‘Tracy broke barriers in the show. She inspired people from all aspects and united them. I always dreamed of playing this role because I felt a connection with this character.

‘I started accepting the fact that I was overweight and tried to make the best of it. When the show ended I was back at square one. I was so depressed and hated myself.

‘There were no parts for me to play because I was overweight. I was still getting bullied and people just thought I was a joke. I knew I had to do something because I just wasn’t happy, and my health was suffering as well.

‘I believe it affected my performance as well. I always felt like I was being judged first for my weight and not my performance – ‘nice job for a big girl’.’ 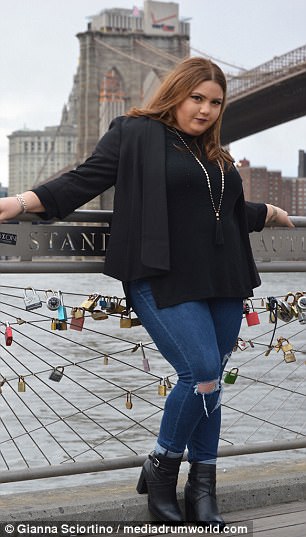 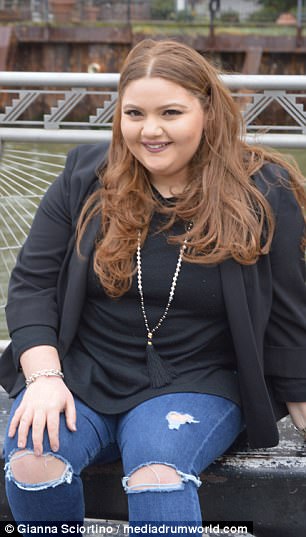 Gianna says that she was left feeling insecure at her old weight, briefly finding confidence while playing the lead in Hairspray 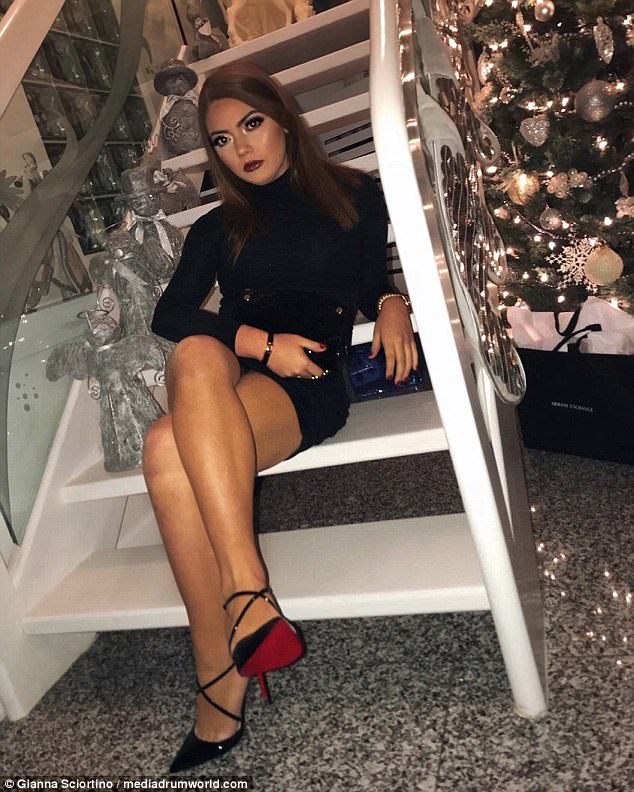 However, since slimming down Gianna says her confidence has soared and she now loves shopping for new clothes

Gianna explained how she began to perform from a young age, despite her insecurities.

‘Since I had an extensive dance background I was always chosen to choreograph a lot of the shows and performances at my school,’ she said.

‘I was flattered, but at the same time I longed for some of the leading roles in those shows. I wanted to be the star.

‘I was overweight ever since the day I was born. Throughout my life I have always eaten healthy and exercised as much as possible.

‘My mum took me for blood testing and found out that my hormone levels were imbalanced. The doctor said, “I don’t want to put your child on medicine, try to make her lose weight”. 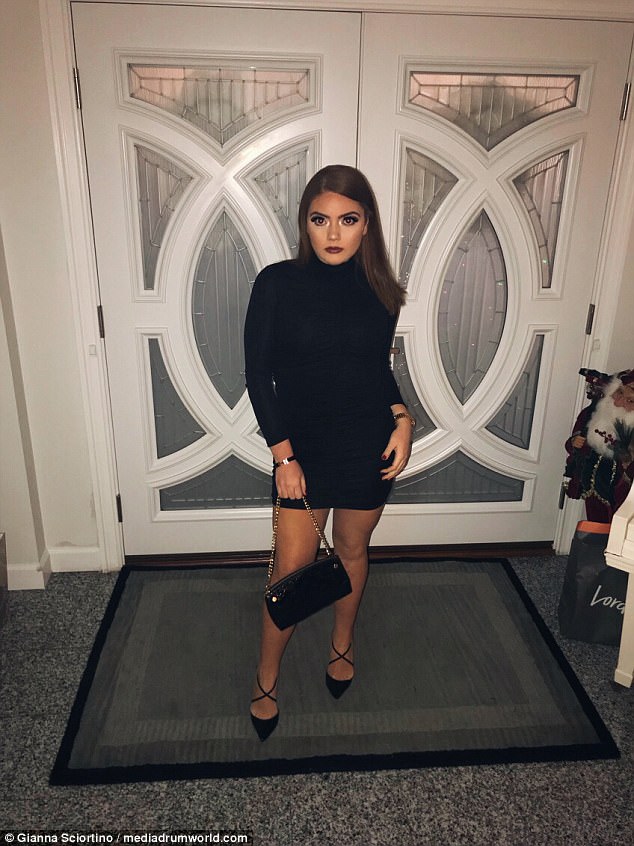 Since shedding half her body weight, Gianna says that she has never been happier

‘I always knew that there had to be something wrong because no matter what I did I was never able to lose weight.

‘As I was gaining more weight, my hormones started changing. I lost my menstrual cycle as well as other things that affected me physically and emotionally.

‘When I was eighteen my endocrinologist diagnosed me with polycystic ovary syndrome because of the amount of weight I gained and all the symptoms that came with the weight gain.’

Polycystic ovary syndrome is a common condition that affects the way a woman’s ovaries work.

According to the NHS the three main features of PCOS are; irregular periods, excess androgen (high levels of ‘male hormones’ that can cause physical signs such as excess facial or body hair), and enlarged ovaries that contain many fluid-filled sacs. 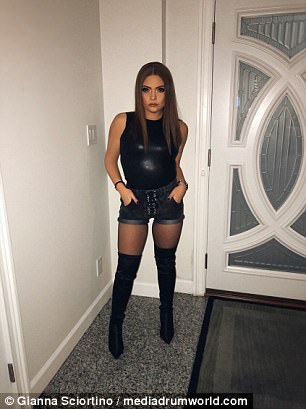 It is thought that one in every five women in the UK have this condition and more than half of them don’t show any symptoms.

‘Before my body transformation I was a sad girl living in a happy girl’s body. I was seriously so upset inside because of my lack of confidence and all the bullying I went through growing up,’ Gianna said.

‘I was so insecure with myself that I barely wanted to leave my house at certain points. I never expressed my feelings to anyone because I was scared of being judged.

‘I always felt like the outcast and fat friend in my group. Boys never really spoke to me.

‘In June 2017 I had the gastric sleeve surgery. This surgery basically cut part of my stomach out to make me less hungry.

‘With this I still eat very healthy and workout. I don’t want it to sound so easy because it wasn’t. Many people think that weight loss surgery is an easy fix and a guaranteed weight loss.

‘Unfortunately, there are a number of people that are unsuccessful after their surgery because of their lack of willpower and eating habits.’

Six months prior to the surgery there were series of tests; one of which was a psychological test.

Gianna continued: ‘I had to work with a nutritionist and had to go on a liquid diet prior to the surgery.

‘I also have to be careful not to eat too fast because I will get sick. But it was the best decision I have ever made.

‘I noticed that I did get my menstrual cycle back and a lot of the other complications I was having started to diminish. I do see a lot more doors opening for me in terms of roles now.

‘Now that I’m comfortable in my own skin, socialising with others has been a lot easier for me. I was always shy whenever I was meeting new people.

‘It was like I had a guard up because I was worried of being bullied or rejected. I’ve never been so happy in my life.

‘I am having fun shopping for a new wardrobe. I feel more confident and feel like I belong when I am hanging with my friends.

‘I love my friends, and it wasn’t them who didn’t make me feel uncomfortable, it was my weight. The best part about it all is that I have inspired so many people along the way.’

Gianna now hopes to inspire others who are struggling with their weight.

She added: ‘Throughout my life I have always kept a diary and wrote songs to hopefully one day publish the book and sing the songs.

‘I hope to inspire others and raise awareness along the way. No one should suffer in silence and if I can help just one person that would mean the world to me.

‘I would tell anyone in the same situation as me to do their research, set a goal and never give up. I didn’t know where to start when I started. It’s a learning process.’

What is PCOS? Causes, symptoms and treatment explained…

PCOS is a hormonal disorder causing enlarged ovaries with small cysts on the outer edges.

Fertility may also be affected.

While the exact cause of PCOS isn’t known, insulin resistance caused by a highly refined and processed diet is believed to be one of the biggest triggers.

PCOS can be managed through diet, the contraceptive pill and other oral medications.