New York’s attorney general, Letitia James, has launched an investigation into whether the New York City Police Department has been targeting communities of color for subway fare evasion.

James, who in 2018 became the first African American and the first woman to be elected as attorney general in New York, explained why she launched the investigation in a statement released on Monday.

‘We’ve all read the stories and seen the disturbing videos of men, women, and children being harassed, dragged away, and arrested by officers in our city’s subway system, which is why we are launching an investigation into this deeply troublesome conduct.’

New York’s attorney general, Letitia James (pictured), has launched an investigation into whether the New York City Police Department has been targeting communities of color for subway fare evasion

James and her team believe that the data and other information may shine a light on whether officers have exhibited racial biases or engaged in discriminatory practices in their enforcement of these laws and regulations throughout New York City’s subway system.

‘If groups of New Yorkers have been unfairly targeted because of the color of their skin, my office will not hesitate to take legal action,’ she said.

‘While we are hopeful that the NYPD will cooperate thoroughly with this investigation, we will not hesitate to use every investigative tool at our disposal to protect subway riders and the people of this city.’

James’ investigation comes just three months after nearly 1,000 protesters took to the streets of Brooklyn to demonstrate against the NYPD after several violent arrests on the subway, and over its plans to put more officers on the beat to catch anyone who skips paying the fare.

The demonstration was said to have been brought on in part by two headline-grabbing incidents involving the NYPD that occurred on October 25 at different Brooklyn subway stations, which drew accusations of excessive force by police. 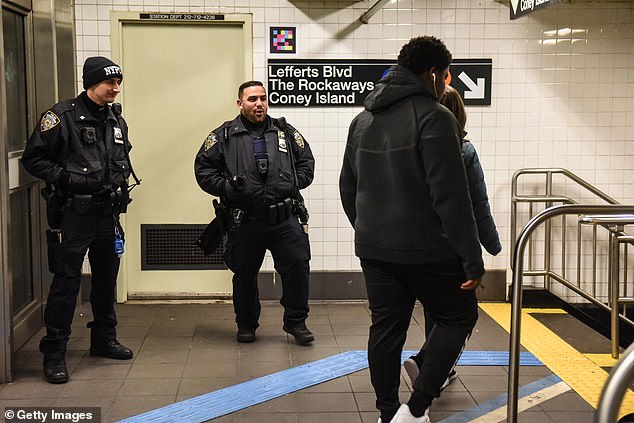 A video of the first incident showed at least 10 police officers storming onto a stopped subway car and tackling an apparently unarmed black man inside, sparking accusations of excessive force.

The 19-year-old, who had his hands up and was seated at the time of the incident, was thought to have had a gun, but did not. He was later charged with theft of services.

The second incident involved two groups of teenagers who were said to have been fighting on the platform.

In the course of breaking up the fight, a police officer was caught on camera punching two black teens.

One of the teens was 15-year-old Benjamin Marshall, who was punched in the face. His lawyer said his family intends to file a $5million lawsuit against the officer and the NYPD.

The other issue is that New York Governor Andrew Cuomo announced a plan for an additional 500 Metropolitan Transportation Authorities (MTA) officers to patrol the subway lines and arrest anyone who jumps the barriers rather than pay the $2.75 fee.