Bearded man Topher Brophy loves his dog that much… he dresses like him and even got him to cut the umbilical cord of his new born baby boy.

The pair are often seen wearing the same outfit and have attracted thousands of Instagram followers.

During an interview with The Morning Show the artist revealed that the half Australian Shepherd, half Poodle, named Rosenberg was in his wife’s delivery suite. 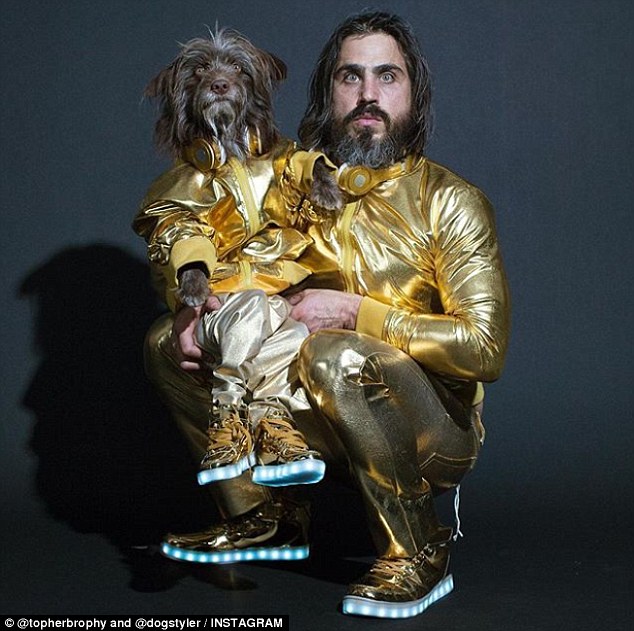 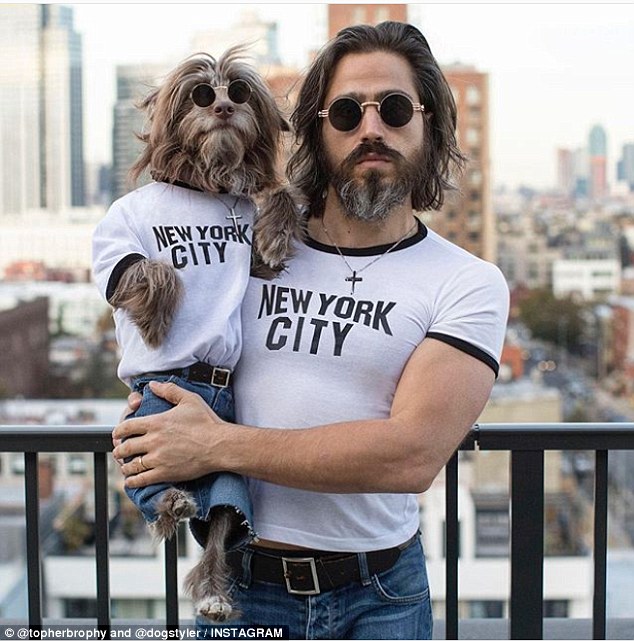 In true twinning style Topher and Rosenburg dressed as doctors for the birth of their newest family member.

But when it came time to cut the umbilical cord the blue scrubs they were wearing became more than just costumes.

‘Rosenberg was there with us and when it came time to cut the cord I froze and chickened out and luckily he was there and he helped us out and he bit the cord,’ he said.

‘I think it was a beautiful birth, my wife was a champion, I think these are the important things here not something else that people might find weird.’

‘Since I was a kid I’ve had people accuse me of being weird and strange and I do my best to try and not judge anybody and help people live life to the fullest and respect everyone for their eccentricities and hope that people do mine,’ he said.

As Topher and Rosenberg grew in popularity they employed  photographer, Chantal Adair, known on Instagram as @thedogstyler, to take photos of them. 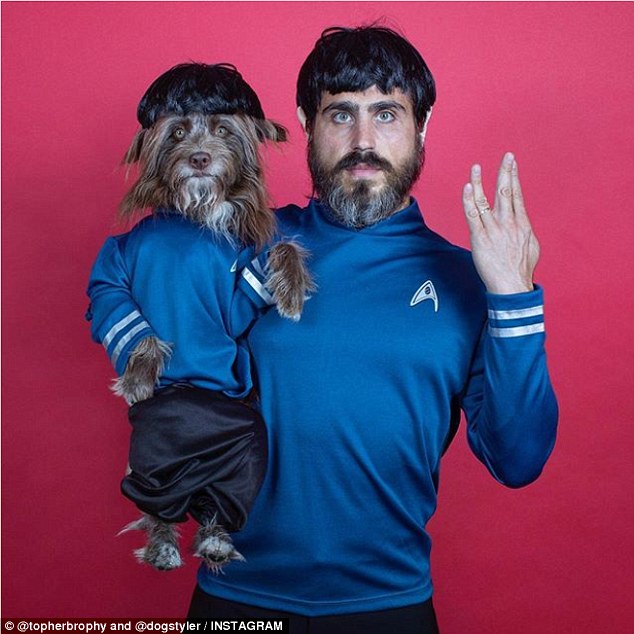 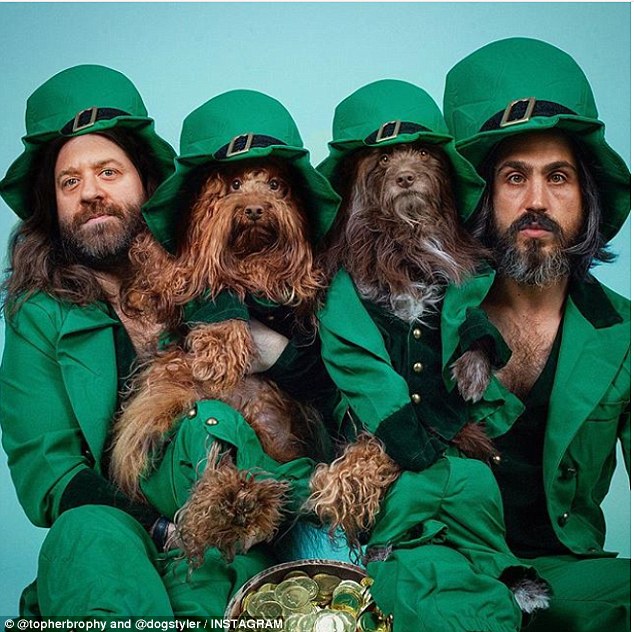 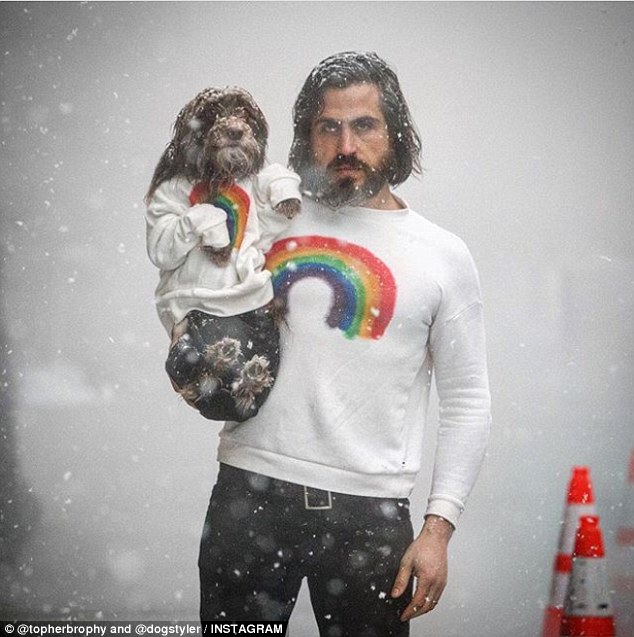 Chantal and Topher fell in love and added a fourth member to their pack their new baby, Topper Tinsley.

Topher, who works as an artist in New York, adopted Rosenburg two years ago.

He says he needed to fill an emotional void in his life left by not caring for something.

Apart from their strikingly similar hair the pair also have matching eyes and as they walked the streets of Brooklyn strangers would run up to comment on their similarities.

‘I didn’t have an understanding that [Rosenberg] looked like me at all. That came later on when we started to go places. … Kids would shout,’That guy looks like his dog”,’ he told Cosmopolitan. 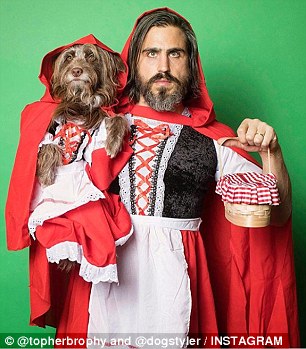 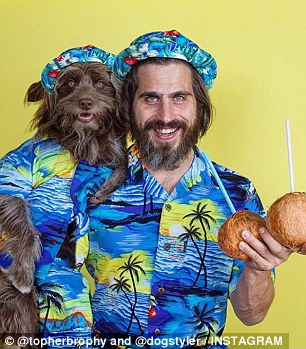 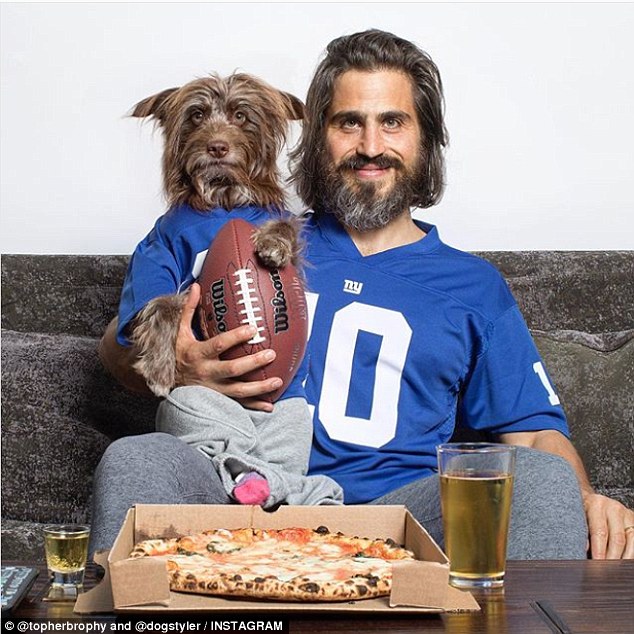 While their love for each other was serious the matching outfits started as a joke.

‘One day, as a joke, we wore matching outfits and people started to crowd around us, all with smiles on their faces, Seeing that this brought happiness to people was energizing and has become our engine.’

The outfits created such a buzz that it quickly became their thing. For Topher, who always had trouble fitting in, the artistic endeavor was liberating. 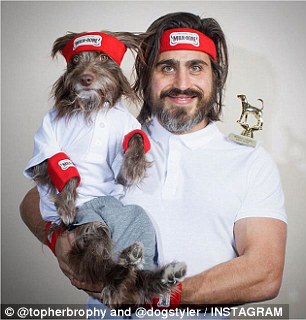 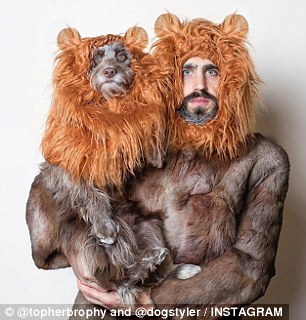 ‘Rosenberg and I have always had trouble fitting in, which can feel isolating at times,’ he said in an Instagram post.

‘It is only recently, through artistic expression, that we’ve been able to embrace these differences, which we now view as our greatest strengths.’

Topher says that Rosenberg loves wearing the outfits, which are all selected by Chantal, but that the minute he changes his mind the antics will be over.

On their website the pair list eight charity organisations from Doctors without boarders to Equality Now that they encourage their fans to get involved with.