New York City will roll out another 6,000 doses of the monkeypox vaccine ‘soon’, officials say as the national infection tally surges to 396.

The nation’s hotspot was blasted last week after offering barely a thousand doses just days before the Pride weekend, with supply being so small that walk-ins were suspended just 90 minutes after the clinic opened.

But now Gov Kathy Hochul has announced thousands more doses are earmarked for the city, which will be offered to the most at risk gay and bisexual men who are close contacts of cases or have multiple sexual partners in a fortnight.

New York City has recorded 78 cases of the tropical virus, the most out of any city in the United States and 20 percent of the national tally.

Another 45 infections were confirmed across America yesterday with the tropical disease now spotted in as many as 28 states. Michigan is the latest to report monkeypox in a patient who is now isolating at home.

No deaths from the rash-causing virus have been reported in America, but one fatality has been registered in Nigeria amid the global outbreak topping 5,000 cases.

The above map shows monkeypox cases detected in America since the outbreak began. The table breaks this down by numbers, and also shows the number added in the last 24 hours 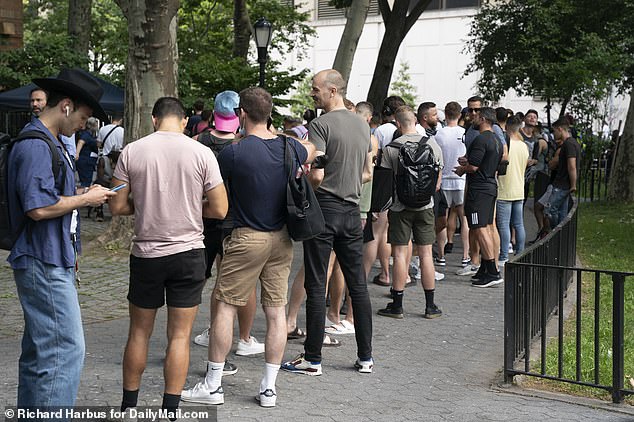 More than a hundred men lined up outside the Chelsea Sexual Health Clinic in Manhattan last Friday to get a dose of the monkeypox vaccine. The clinic only admitted people who had got appointments, and turned away all others

But it had to stop offering doses by walk-in within 90 minutes and over appointment within hours after all slots were filled.

People waiting at the clinic for the shot blasted the barely a thousand doses available as ‘ridiculous’ in a city of nearly eight million. Others accused officials of giving ‘contradictory’ information on how to get jabbed.

What vaccines are available for monkeypox?

There are two vaccines available against monkeypox in the U.S., but at present only one is being rolled out widely.

The Jynneous vaccine requires two doses given about four weeks apart, although it sparks protection almost immediately after the first jab.

It is preferred by health officials because it has less severe side-effects.

It is also about 85 percent effective against infections with the tropical disease.

America is currently rolling out 56,000 doses, with hundreds of thousands more expected to arrive before the end of the year.

This is older than the Jynneous vaccine and is associated with harsh side-effects including in rare cases trouble breathing, seizures and a sudden loss of vision.

There are about a million doses of this jab available.

Both are designed to fight smallpox, but health chiefs say they will work just as well against monkeypox because the two viruses are similar.

Chis LeBron, a Democrat candidate for the New York State Assembly, also weighed in criticizing the roll out as a last minute move ahead of the Pride weekend.

New York City has got hold of the doses through the White House which has made another 56,000 doses of the Jynneous vaccine available to states across America.

It was not clear when the city would start offering people appointments for the jab again.

It was also not clear how many doses have been secured by other states.

This two-dose jab is about 85 percent effective against infections, and sparks protection within minutes of receiving the first dose.

America will make another 240,000 doses of the vaccine available in the coming weeks, with a further 750,000 set to come on stream by the end of this year.

There are also plans to offer around the million or so doses of the ACAM2000 jab, although this is not preferred because of its more severe side-effects.

Both vaccines were designed to tackle smallpox, but health chiefs say they should work as well against monkeypox because the two viruses are closely related.

New York City and Washington D.C. are the first two areas to begin rolling out the monkeypox vaccine to gay or bisexual men who have multiple sexual partners.

Revealing plans to roll out more monkeypox vaccines in New York City plus 2,000 in the wider state, Hochul said: ‘In New York State, we have seen a disproportionate number of cases, especially for LGBTQ+ New Yorkers, which is why my team and I will continue to work around the clock to secure as many vaccines as possible for our residents.’

It comes after it was revealed that America’s first monkeypox patient to come forward was a gay actor in Los Angeles who caught the infection after ‘skin-to-skin’ contact with another patient.

Matt Ford, who lives between New York City and Los Angeles, spoke out to warn people that the disease ‘sucks’ and they should ‘take it seriously’.

He blasted the Centers for Disease Control and Prevention (CDC) for their poor testing efforts, saying it took officials three days to diagnose his illness by which point he ‘already knew’ what they would say.

Revealing his diagnosis, Ford said he initially noticed spots appearing in his ‘underwear zone’ which then spread across the rest of his body including face, arms, hands and abdomen.

The patient, who describes himself as a ‘proud openly gay man’ said he counted 25 spots on his body to date.

After appearing he said they began to ‘fill with puss’ and became itchy. Several in the ‘sensitive area’ became so painful that they left him unable to sleep without painkillers.

Ford also suffered flu-like symptoms in the early stages ranging from a fever, chills, night sweats and a cough.

He is now isolating at home with the symptoms having largely subsided, but will remain there until all the spots have scabbed over and the scabs have fallen off.

The CDC was performing about 60 tests for monkeypox a day last week, leaving it unable to stay on top of the virus.

But it has now sent more swabbing kits to private laboratories as it aims to ramp up testing to tens of thousands a day.