A shocking video has shown the moment an angry driver drove into a group of protesters in New York City on Saturday following a relatively peaceful day of demonstrations against the death of George Floyd and police brutality across the city.

Footage of the incident, which was shared on social media, showed a driver in Brooklyn’s Crown Heights, jumping the curb and driving onto the sidewalk, where a number of people on bikes had gathered, before hitting a cyclist and speeding off.

Witnesses told Gothamist the driver had reportedly complained about having to go to work as a Black Lives Matter march was taking place and blocking the road.

‘Protesters tried to convince him to turn around and instead he backed up and drove into a crowd. At least one guy was hurt and FDNY and NYPD responded,’ one witness said.

Police said the driver had hit a man’s ankle and ruined his bike. He was later arrested, according to the NYT.

The incident comes amid a generally calm night of demonstrations in the city that continued hours after the 8pm curfew.

More than two hours after the order kicked in, groups of several hundred demonstrators continued to march in Manhattan and Brooklyn, while police monitored them but took a hands-off approach. 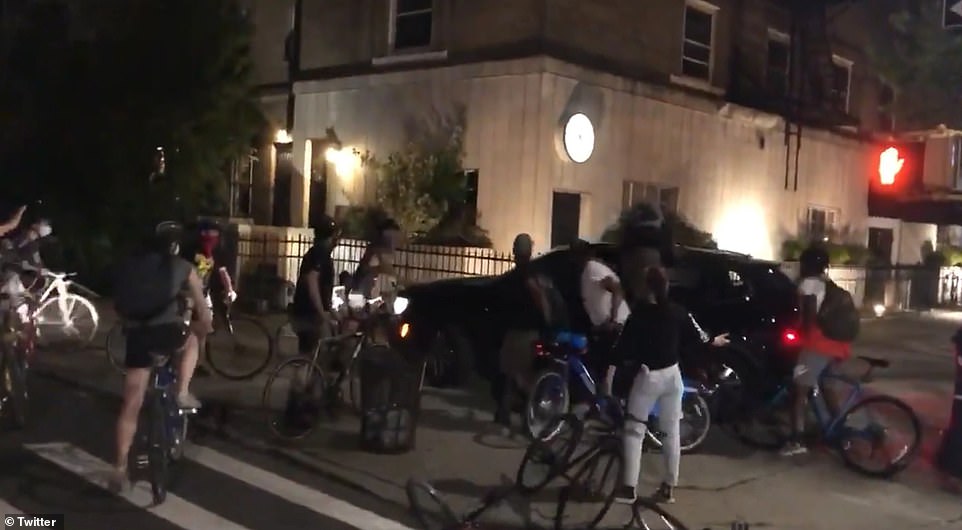 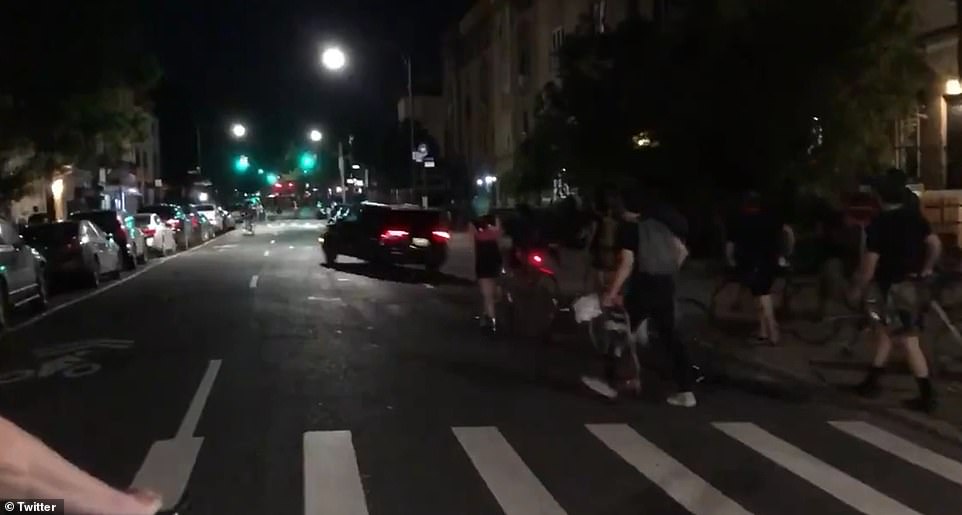 Witnesses claimed the driver insisted he had to go to work and was frustrated that the march was blocking the road. He later drove through them and sped off 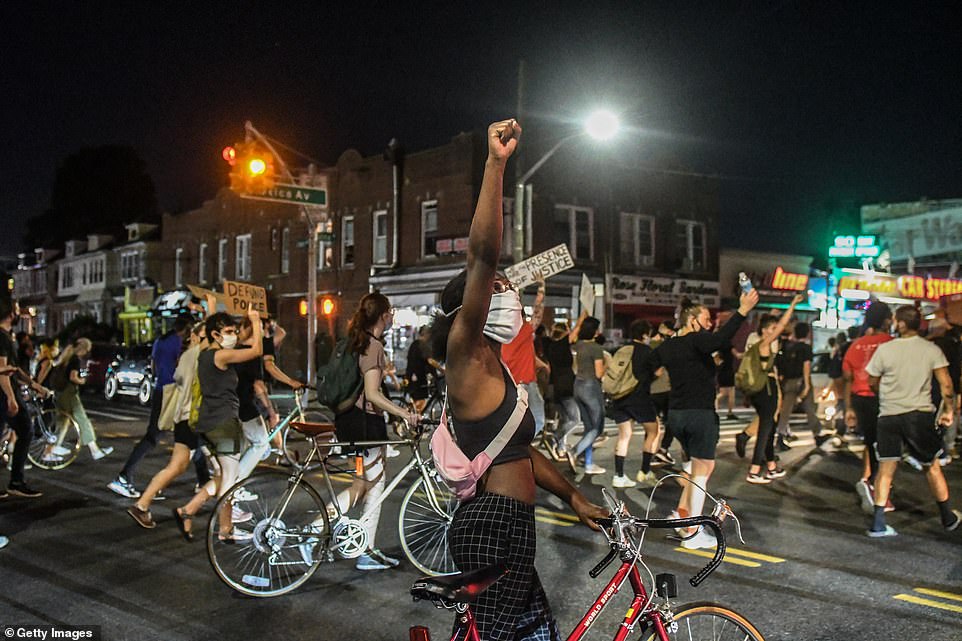 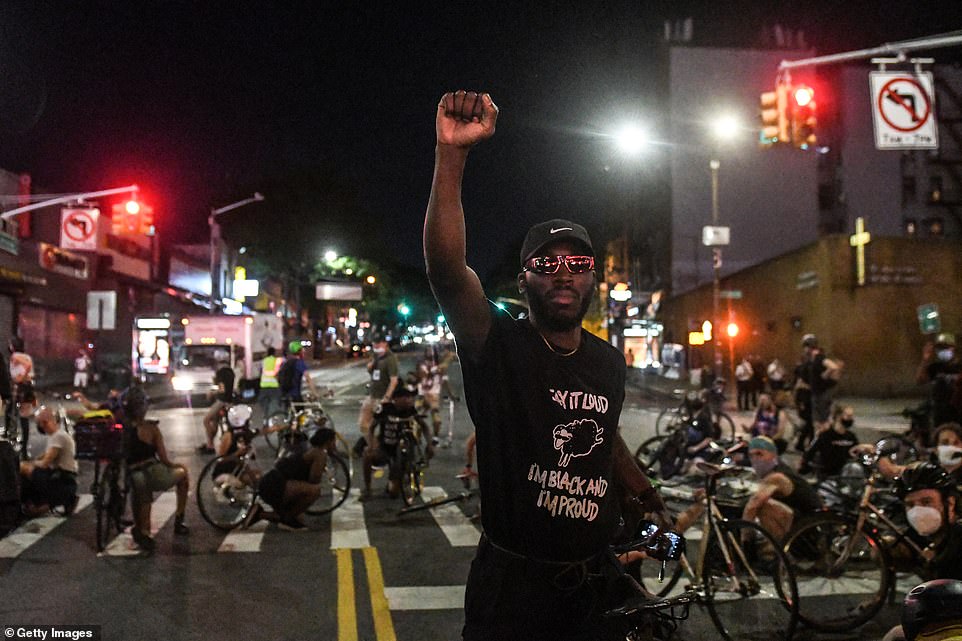 NYC saw its ninth day of protests on Saturday, which have become largely peaceful compared to last weekend 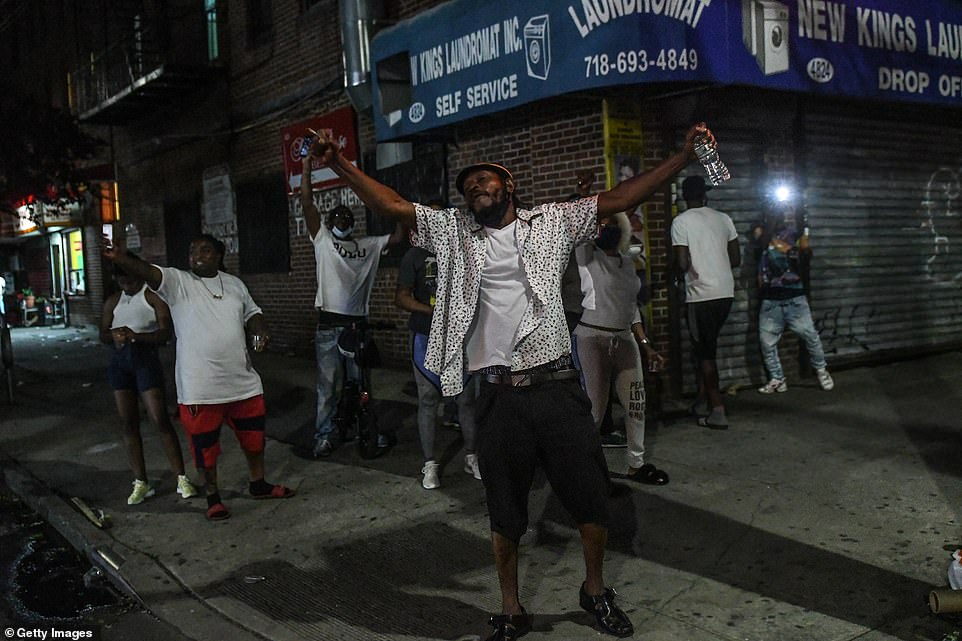 The NYPD’s enforcement of the curfew, which will remain in place until 5am on Monday, became another point of tension and outrage among the community this week after officers were seen mistreating peaceful protesters and even essential workers who are exempt from the rule, during their strict crackdown.

On Friday, police appeared to have dropped their heavy-handed tactics as they generally allowed thousands to continue marching and only a few dozen orderly arrests were made.

At protests in Manhattan earlier Saturday, the atmosphere in the city had become much more relaxed compared to last weekend, with volunteers handing out snacks, first aid kits and plenty of water bottles on a muggy afternoon.

One person carried a sign listing nearby open buildings for those seeking to escape the heat – which some soon did when a rain storm arrived.

Thousands of people crossed the Brooklyn Bridge into lower Manhattan, where other groups numbering in the hundreds to thousands marched or gathered in places like Foley Square, home to state and federal court buildings, and in Greenwich Village.

Others gathered in Harlem near the northwest corner of Central Park to march downtown, about 100 blocks, to the city’s Washington Square Park. 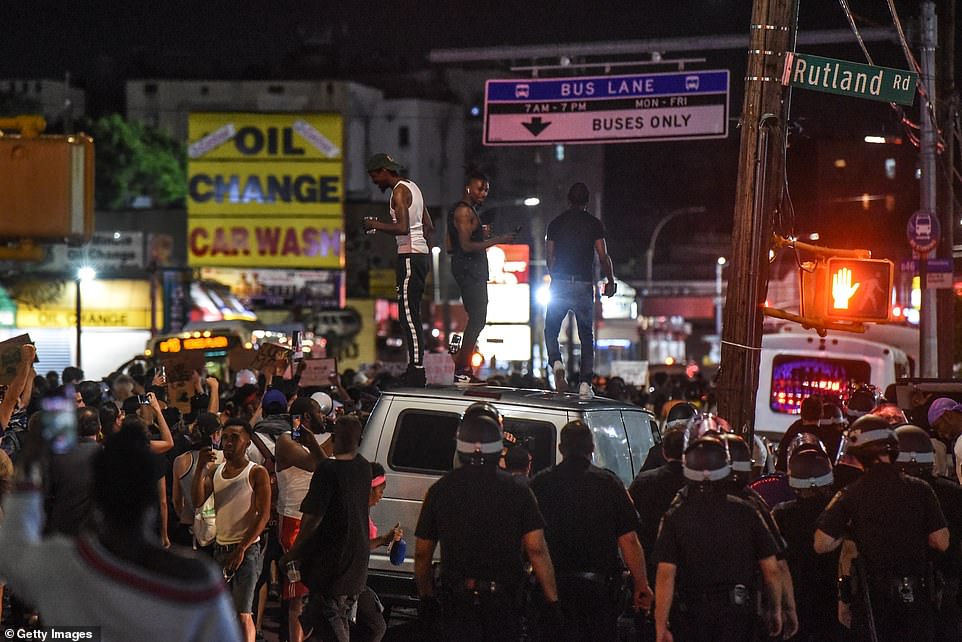 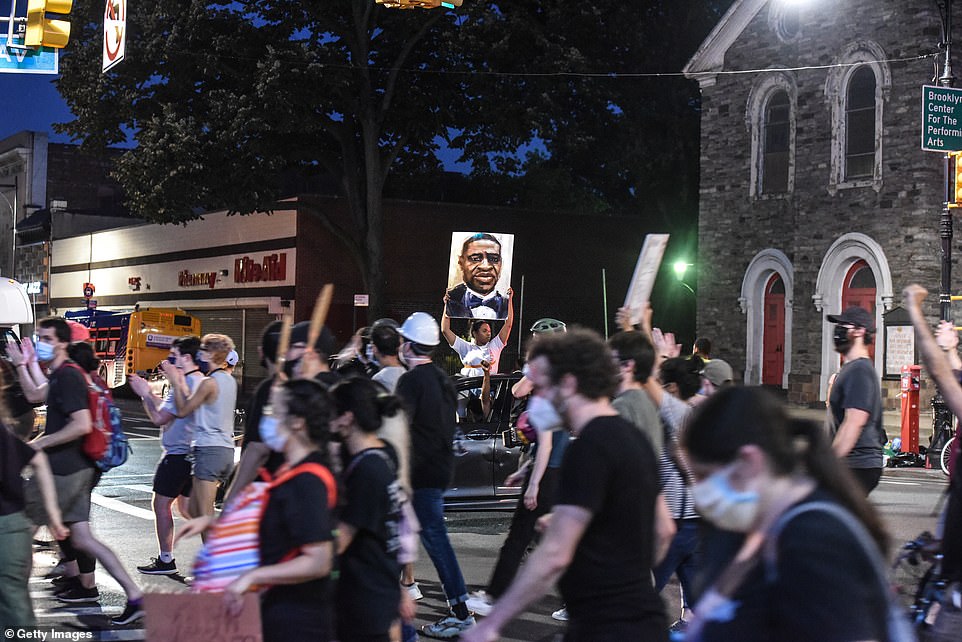 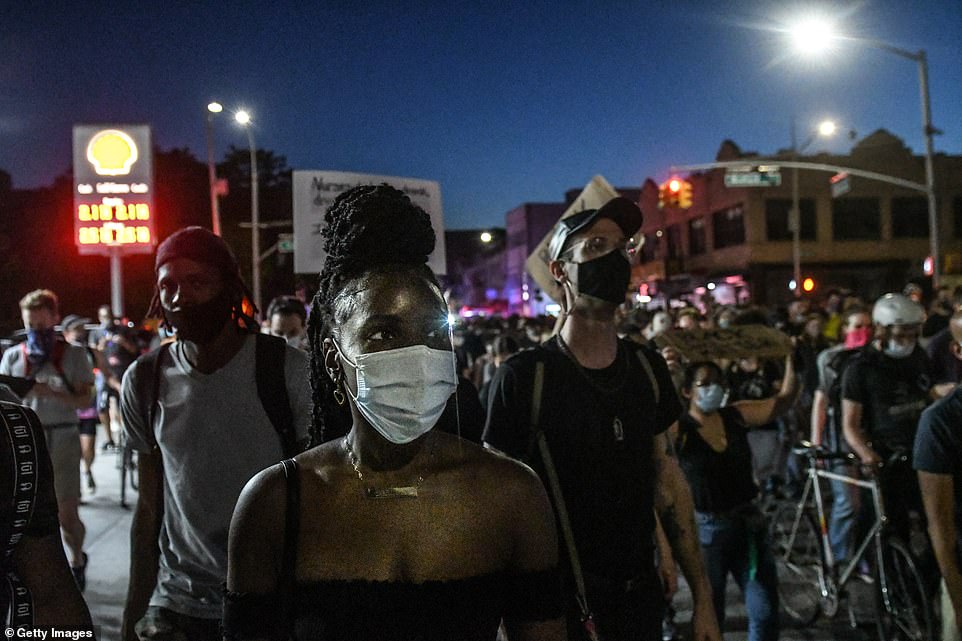 Further uptown, police had erected barriers to all but close off Times Square to vehicle and foot traffic.

As the curfew passed, a large group of protesters walked onto the FDR Drive, the main north-south artery along Manhattan’s east side, closely monitored by police, forcing police to temporarily shut down one side of the roadway.

One of Saturday’s marches was enlivened by a band led by Jon Batiste, bandleader on The Late Show with Stephen Colbert.

Local politicians and civil liberties advocates have called for an end to the 8 p.m. curfew, complaining that it causes needless friction when officers try to enforce it.

But Mayor Bill de Blasio has insisted the curfew will remain in place throughout the weekend.

Images on social media on Friday night about an hour after a Brooklyn protest ended showed officers surrounding a group of protesters and chasing down some with batons. 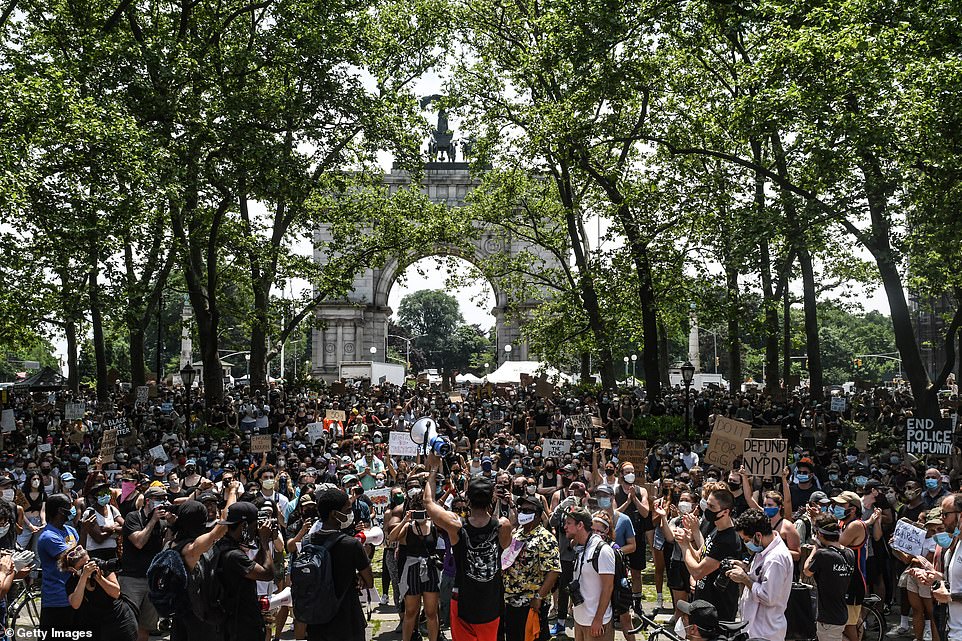 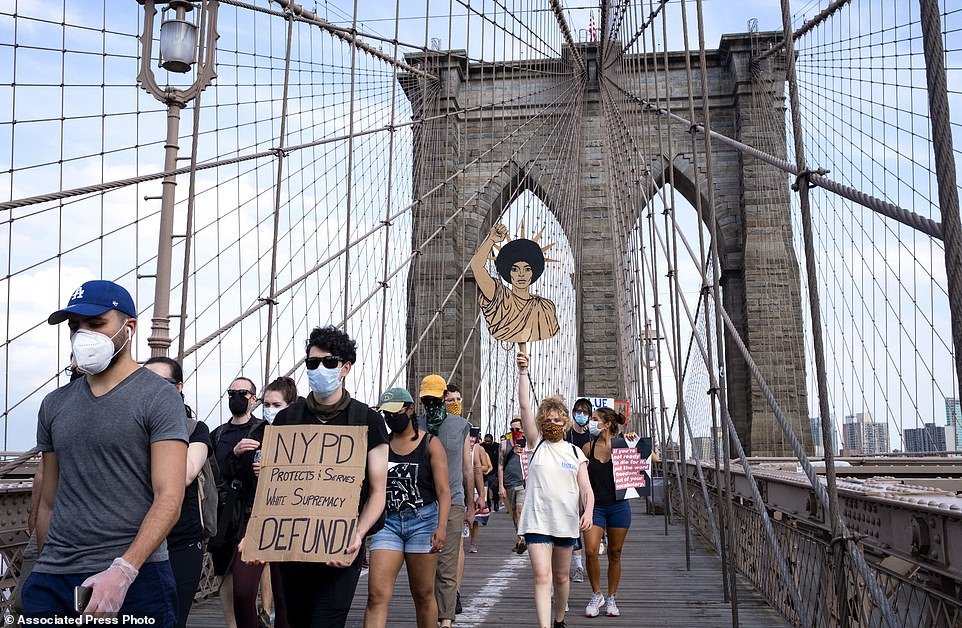 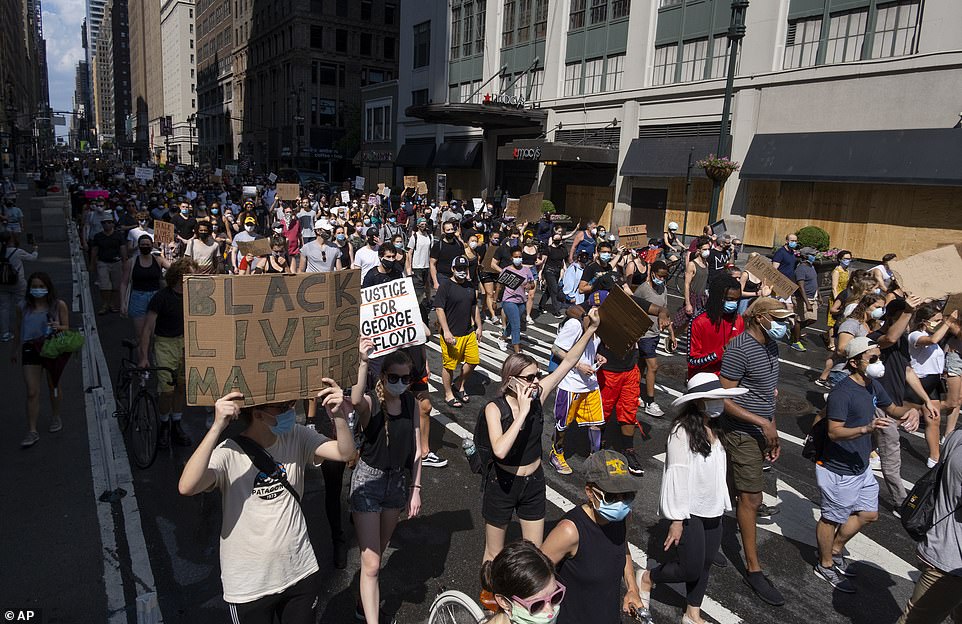 MANHATTAN, NEW YORK CITY: Activists move along 7th Avenue as they walked for miles in a peaceful protest 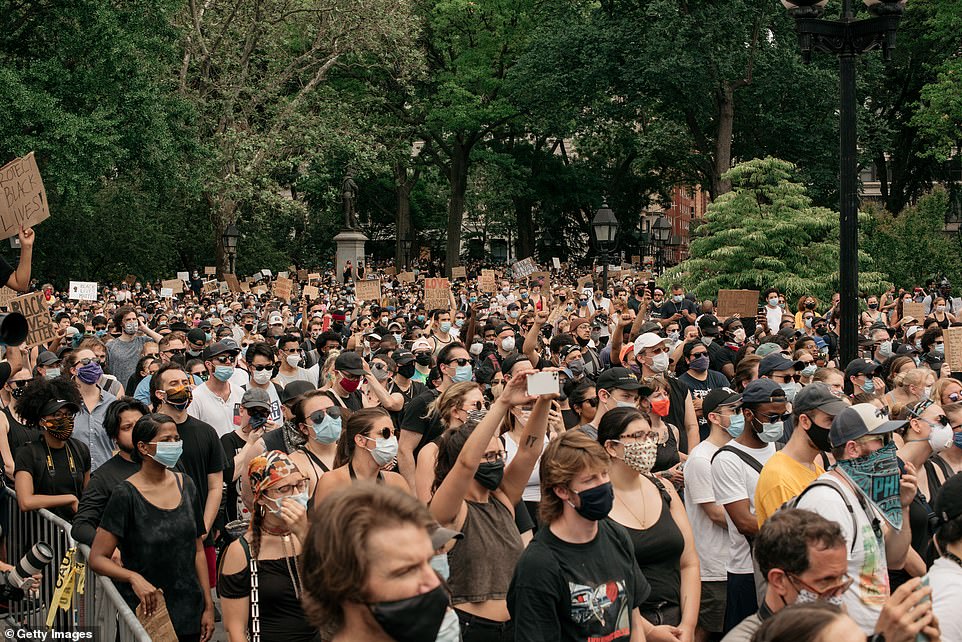 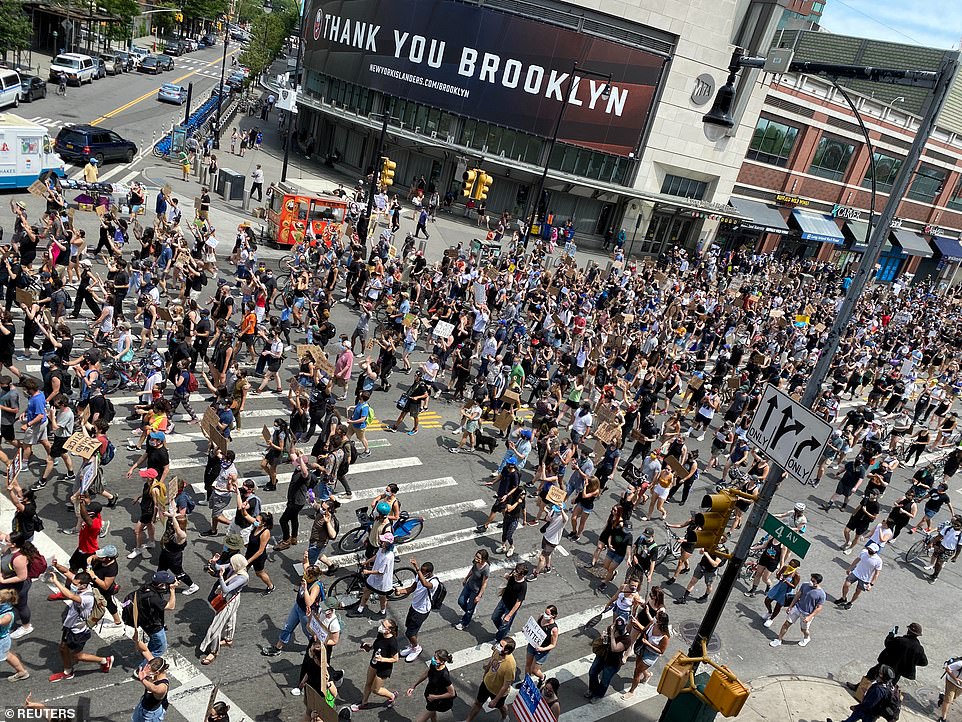 BROOKLYN, NEW YORK CITY: Demonstrators march down Flatbush Avenue in Brooklyn toward the Manhattan Bridge chanting slogans as thousands joined protests across the city again on Saturday for the 12th straight day

And officers on Manhattan´s East Side also used force to break up remnants of a march that started near the mayor´s official residence.

There were about 40 arrests citywide Friday – far fewer than previous nights – and no obvious signs of the smash-and-grab stealing that marred protests earlier in the week.

Also on Saturday, police announced charges against a man who allegedly stabbed a police officer in the neck in Brooklyn on Wednesday night.

Dzenan Camovic, 20, has been hospitalized in critical condition with multiple gunshot wounds. The Brooklyn resident faces multiple charges, including attempted murder of a police officer. 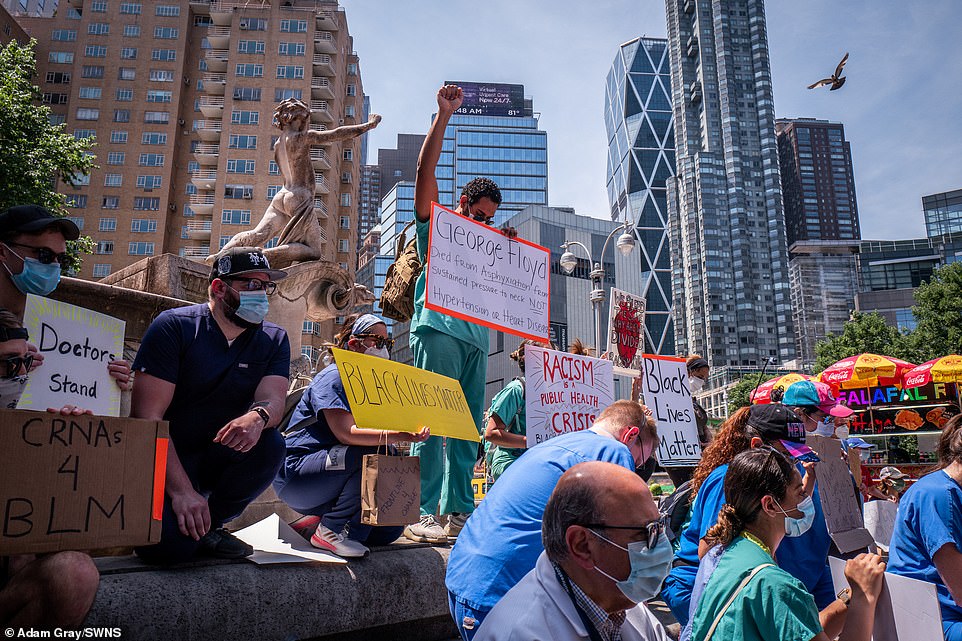 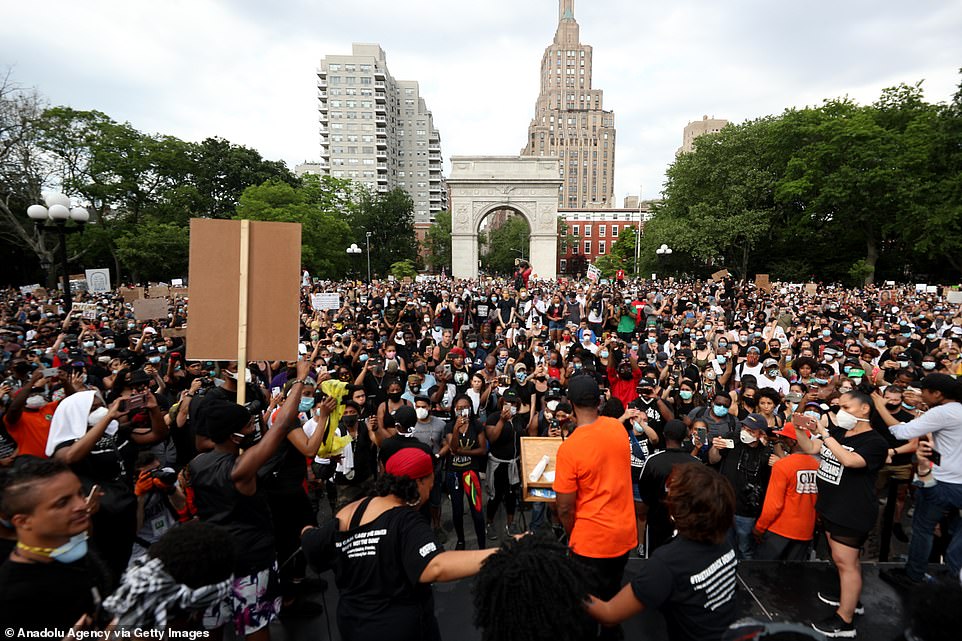 NEW YORK CITY: Demonstrations over the death of George Floyd continued in New York City on Saturday as the city continued to enforce an 8 p.m. curfew that has created tensions between protesters and police