New York City, once the U.S. epicenter of coronavirus infections, reached its first day in nearly four months without a single coronavirus death, according to preliminary numbers released on Sunday.

New York City health department data showed there were no deaths from COVID-19 on Saturday.

It’s the first time since March 13 that no deaths from the virus were reported.

New York diners eat al fresco due to COVID-19 concerns in the West Village. Saturday saw no deaths at all from coronavirus, the first day without deaths since March 13 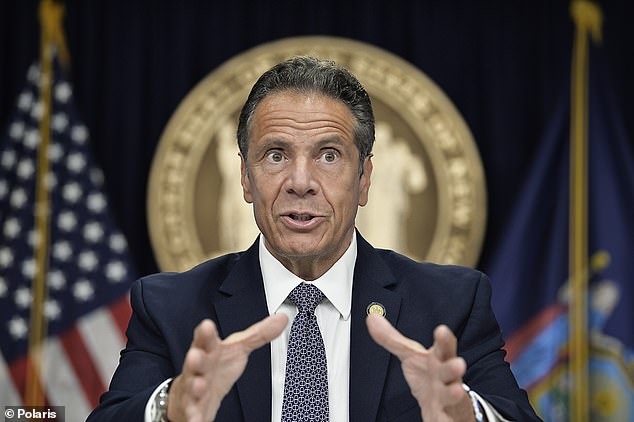 There were also no confirmed cases from the disease on Friday, as well.

The very first person to die from the virus in New York City passed away on March 11. Daily deaths peaked at 799 in April.

Since that time, 18,670 people have died from the illness along with 4,613 probable COVID-19 deaths that have been reported, according to the New York Post.

Alongside deaths, the total number of New Yorkers hospitalized with the coronavirus fell to the lowest point in nearly four months, state officials said Saturday.

But Governor Andrew Cuomo is predicting a new increase in cases amid outbreaks in other states. 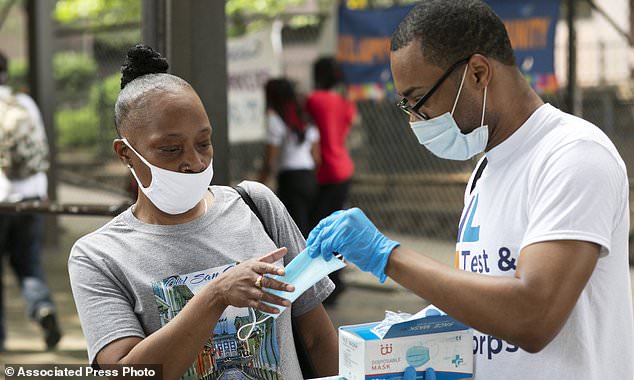 Stephane Labossiere, right, with the Mayor’s Office of Immigrant Affairs, handed out masks and printed information about free COVID-19 testing in Brooklyn over the weekend 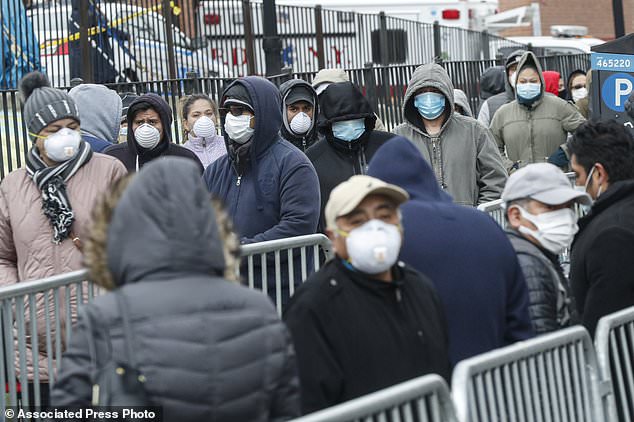 In March, as the virus began to take hold, patients could be seen wearing personal protective equipment while maintaining social distancing as they wait in line for a COVID-19 tests at Elmhurst Hospital Center, in New York

‘The only question is how far up our rate goes,’ Cuomo said in an interview with WAMC radio on Friday. ‘You can’t have it all across the country and not come back.’

The governor acknowledged the limitations in enforcing quarantine rules for travelers returning from states with rising rates of transmission. The travel advisory currently applies to people entering New York from 19 states, including California, Texas and Florida.

‘How do you catch somebody driving in, right? I mean, it’s very very difficult, it’s trying to catch water in a screen,’ Cuomo said. ‘And there’s a certain inevitability to it. It was in China, got on a plane, went to Europe, people in Europe got on a plane, came here. Then it went down south, down west and it’s going to come back.’

‘We’re doing everything we can,’ he said, ‘but I can feel it coming.’

‘I urge residents to stay New York tough and not give up the ground we’ve worked so hard to gain together, particularly in the face of rising cases throughout the country and compliance issues here at home,’ Cuomo said in a statement.

Deaths in several other states were rising, meanwhile, including Arizona, Illinois, New Jersey and South Carolina. 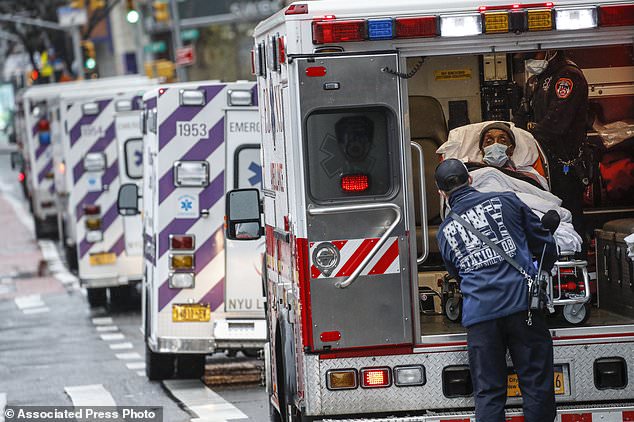 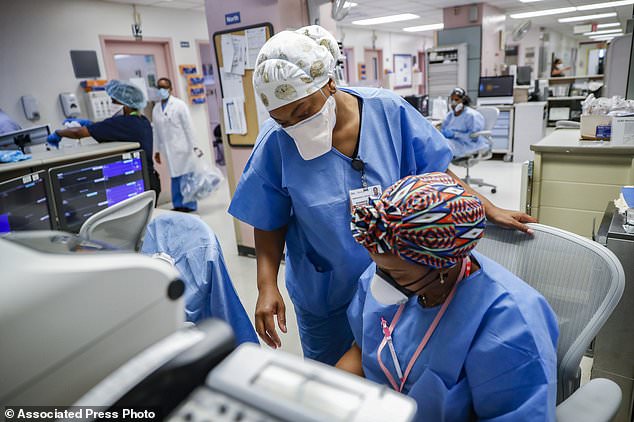 As coronavirus rages out of control in other parts of the U.S., New York is offering an example after taming the nation’s deadliest outbreak this spring – but also trying to prepare in case another surge comes

The virus has killed more than 130,000 people in the U.S. and more than a half-million worldwide, according to Johns Hopkins University, though the true numbers are believed to be higher.

New York state has recorded nearly 25,000 deaths, according to an official state tally that doesn’t include people who likely died of the disease.

A widely cited University of Washington model doesn’t project spikes — at least through its November 1 time frame — in New York, New Jersey or Connecticut, whose Democratic governors have coordinated on traveler quarantines and, earlier, some shutdown policies. But that doesn’t mean the densely populated tri-state area is in the clear.

‘We expect the virus to return in all of those states,’ said Dr. Christopher Murray, head of the university’s Institute for Health Metrics and Evaluation. ‘The question is one of timing.’ 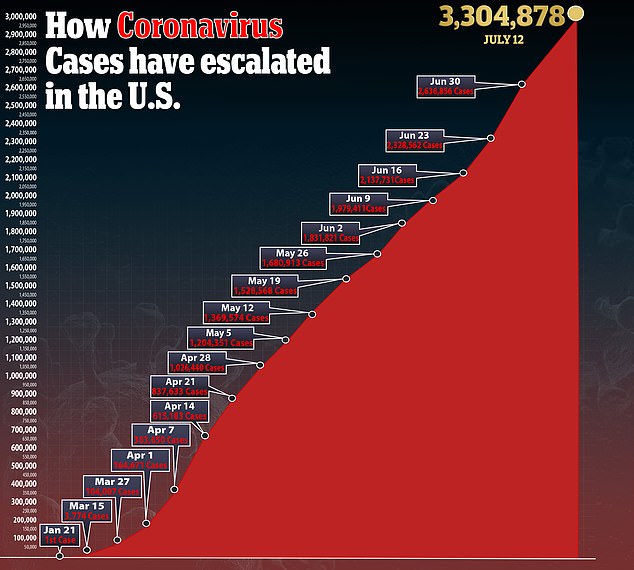 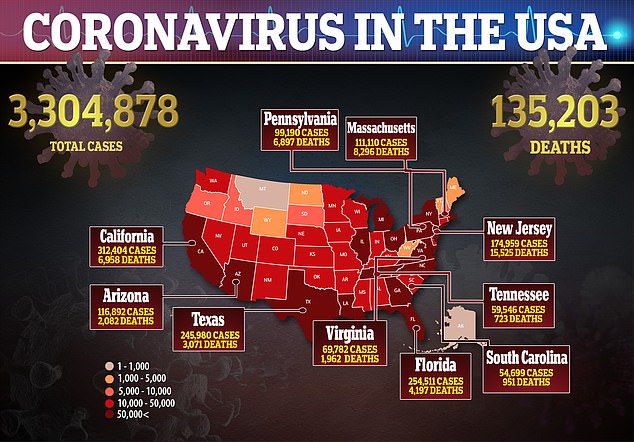 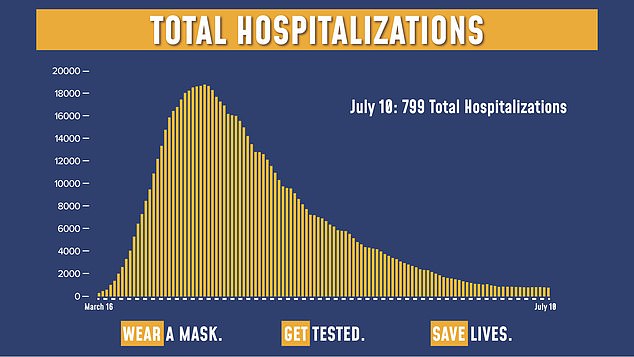 On Friday, coronavirus hospitalizations in New York dipped under 800 for the first time since March 18, in a remarkable turnaround for the state that was at the center of the outbreak

Thousands of contact tracers have been hired to try to keep the virus in check. And mask-wearing has been widespread in the nation’s biggest city since a city recommendation and subsequent state requirement in April, while some other states have only recently started telling residents to don masks in public.

Still, with more New Yorkers getting out and about and riding mass transit, and police taking a hands-off approach to enforcing mask and distancing rules after several violent clashes caught on video, experts worry it’s inevitable case numbers will spike.