An adorable husky named Sinatra disappeared from his home in New York and turned up in a Florida neighborhood 18 months later.

No one knows what Sinatra the brown and white Husky did in between the time he went missing from Brooklyn and traveled 1,200 miles to end up on the streets of Seffner near Tampa.

He was taken in by Rose Verrill, 13, who found him wandering near her Lenna Avenue home and her family launched a search with help from friend Jeanne Baldi. 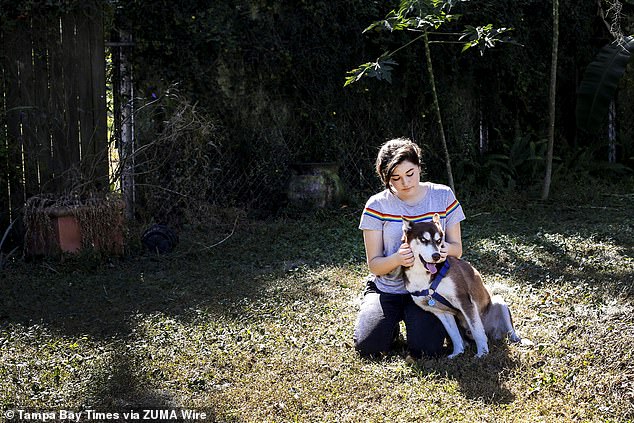 Sinatra was taken in by Rose Verrill, 13, who found him wandering near her home after travelling for 18 months and 1,200 miles from his home in Brooklyn

A local veterinarian removed an identification chip from Sinatra but couldn’t recover much information.

They turned to the Hillsborough County Pet Resource Center and came up with a possible owner’s name and a phone number.

Sinatra once belonged to 16-year-old Zion Willis, who died in a gun accident in Brooklyn, New York, in 2015. He will be reunited with her family in Baltimore on Sunday.

The Tampa Bay Times reports that while the dog has been found and no one knows how he traveled that distance and managed to survive with food and water.

Sinatra was a 14th birthday gift for Zion, who was an avid dancer and an animal lover.

The blue-eyed dog loved to chase raccoons and squirrels, the teen’s father told the newspaper. 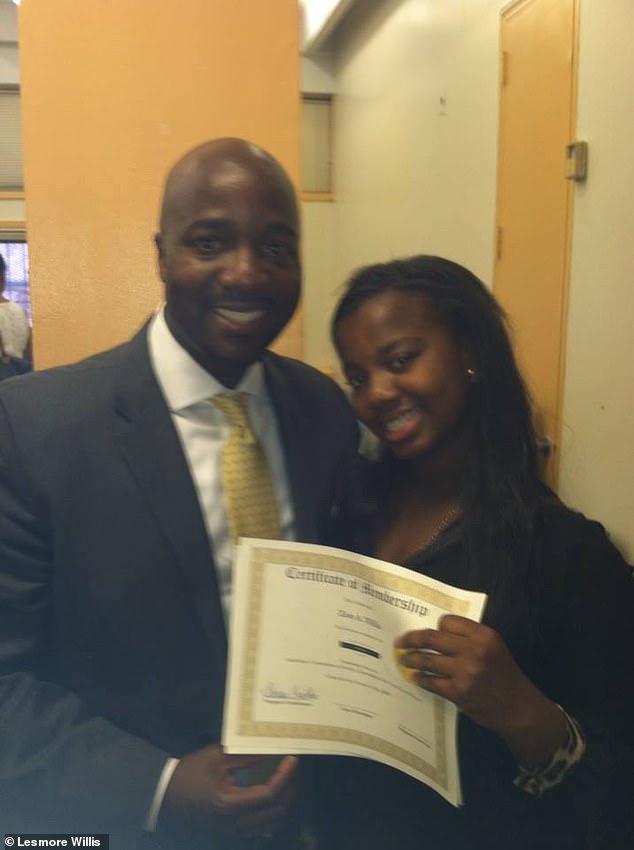 Sinatra belonged to Zion Wilis, 14, (right) who died in  a gun accident at a friend’s house in November 2015. 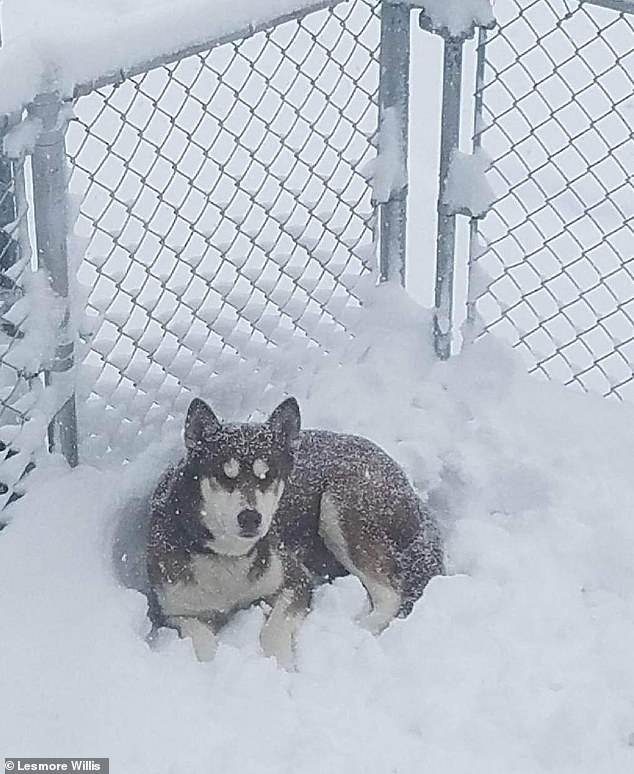 One day, a year-and-a-half after Zion’s death, the dog never came home. It was a tragic loss for Zion’s grieving parents.

Some 18 months passed before the Florida teen found Sinatra near her home.

‘He’s been such a wonderful guest and such a sweet dog,’  said Rose’s mother, Denise Verril. ‘I can see why they love him so much’.

They took him to a veterinarian who was not able to retrieve much from an identification chip. 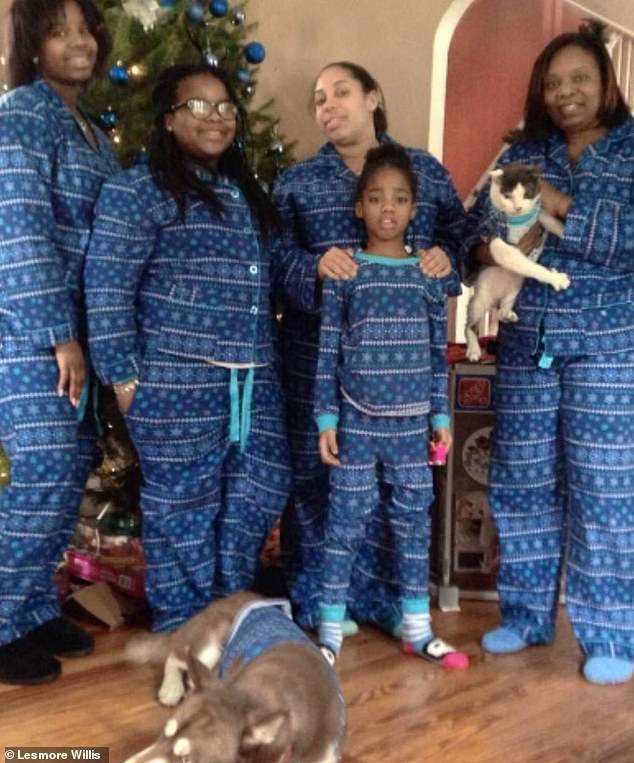 In Brooklyn, the grieving Willis family had suffered an added blow when Sinatra disappeared 18 months after Zion’s death in 2015

They took him to a veterinarian who was not able to retrieve much from an identification chip.

They turned to the Hillsborough County Pet Resource Center, which came up with a possible name – Willis Les – and a phone number that was off by one digit. 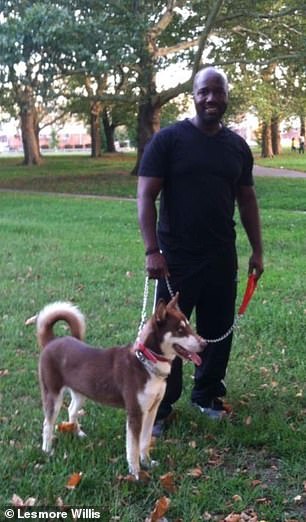 That’s when Baldi took to social media and reached out to Lesmore Willis with the information she had.

‘I never would have thought he was from Brooklyn. I messaged Lesmore over Facebook and didn’t think it would lead to anything when I saw where he was from’.

A few days later, Willis messaged back. As they compared notes, they both spoke of a dog that had a problem with its right foot.

Baldi sent along a photo and Willis confirmed it was Sinatra.

‘I told him that he was safe and well taken care of with Denise,’ Baldi said.

Lesmore Willis spoke of his daughter’s love for the dog. She said: ‘That was her dog and their bond was strong. She loved to take him on her walks to the store.

‘The love was obvious. When he was gone, it was like losing a part of her’.

After Sinatra disappeared, they put up flyers and spent months searching.

A friend of Verrill’s is taking Sinatra to Baltimore for the Thanksgiving weekend reunion.

In his temporary home, Sinatra, like his blue-eyed namesake,  seems to enjoy breaking into song. He does a duet with another family dog. 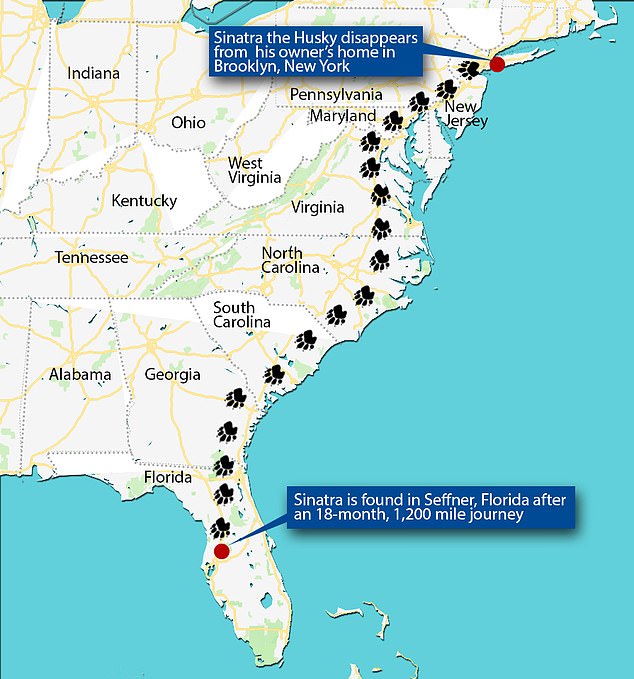 It’s not known what Sinatra got up to on his mammoth 1,200 mile journey from New York to Florida or how he managed to get food and water for the 18 months he was missing

Denise added: ‘It’s the funniest thing. He’s been such a wonderful guest and such a sweet dog. I can see why they love him so much’.

In Brooklyn, the grieving Willis family had suffered an added blow when Sinatra disappeared 18 months after Zion’s death.

Wilis said: ‘He’s known throughout the neighborhood as the dog who runs off to chase raccoons and squirrels.

‘He’s done it before, but usually he comes back no more than 30 minutes later, and he never came back’.