The Giants announced the hiring late Monday afternoon, less than 24 hours after Shurmur and the Vikings were beaten by the Philadelphia Eagles in the NFC title game.

The 52-year-old Shurmur replaces Ben McAdoo, who was fired in early December with the team mired with a 2-10 record and owners and fans upset with his handling of the benching of two-time Super Bowl MVP Eli Manning.

Minnesota Vikings quarterback Case Keenum, left, reacts on the bench beside offensive coordinator Pat Shurmur during the second half of the NFL football NFC championship game against the Philadelphia Eagles, in Philadelphia

Defensive coordinator Steve Spagnuolo took over for the final four games and posted a 1-3 record.

‘He has an outstanding track record in developing young players, and it is clear his players respond to his guidance and direction,’ co-owners John Mara and Steve Tisch said in a statement.

‘We interviewed six talented and qualified candidates, and we feel like Pat, with his vision and experience, is the right person to lead our team.’

The Giants won’t officially introduce Shurmur until Friday. A winter storm in the Midwest is preventing him from coming to New Jersey on Tuesday and he will be at the Senior Bowl in Mobile, Alabama, from Tuesday night through Thursday.

Shurmur returns to the head coaching ranks for the first time since leading the Cleveland Browns in 2011-12. He takes over a troubled team that posted a 3-13 record a year after making the playoffs.

Following that meeting in Minneapolis, Shurmur had an hour-long phone conversation with Tisch. 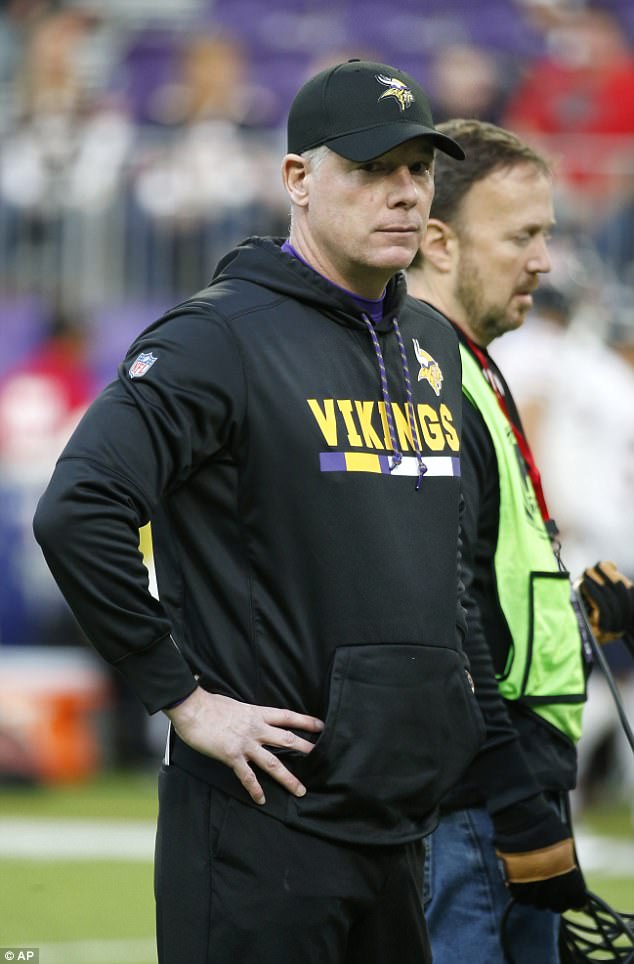 ‘I can’t wait to start working with Pat,’ said Gettleman. ‘I know he will provide the type of leadership we need to take our team back to where it belongs. I have followed Pat’s career for many years, and he has had great success wherever he has been.

‘What struck me during our conversation is that being the head coach of the New York Giants is not too big for him. He is made for this moment and this opportunity.’

The Giants interviewed five other candidates, kicking it off with Spagnuolo three days after the season ended.

Shurmur has earned a reputation as a quarterback whisperer. NFC title game opponents Nick Foles of the Eagles and Case Keenum of the Vikings were tutored by him. 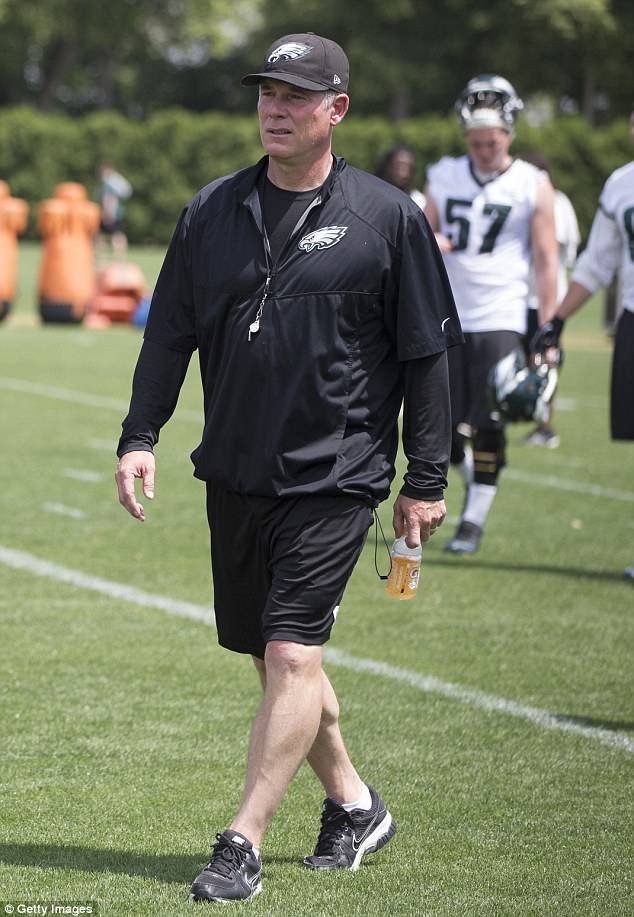 Shurmur began his NFL career coaching with the Philadelphia Eagles

With the Giants, Shurmur will get to work with Manning and possibly the No. 2 pick in the draft, if New York uses the pick to pick an heir apparent.

But the Giants also had problems in the locker room. Three defensive backs – Janoris Jenkins, Dominique Rodgers-Cromartie and Eli Apple were suspended for a game for conduct detrimental to the team. 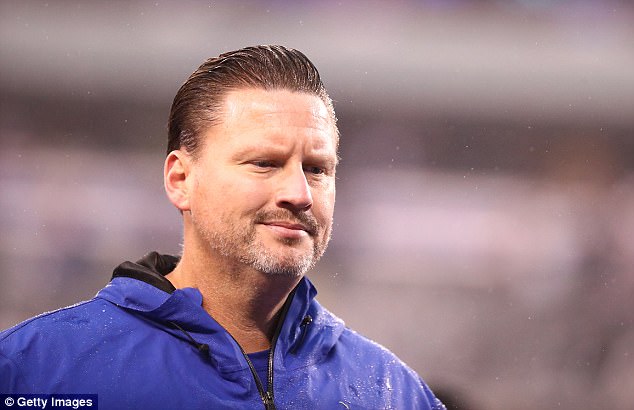 ‘He’s not a stubborn guy. He’s going to throw stuff out if it’s not working, and he’s going to find things that guys are good at,’ Thielen said Monday as the Vikings cleaned out their lockers.

Shurmur has been a part of teams that have qualified for the playoffs nine times and won seven division titles. He was Philadelphia’s quarterbacks coach when the Eagles played in the Super Bowl against New England in the 2004 season.

Shurmur is finishing his second year with the Vikings. He began last season as the tight ends coach and for the final nine games was also the offensive coordinator, the title he retained this season. 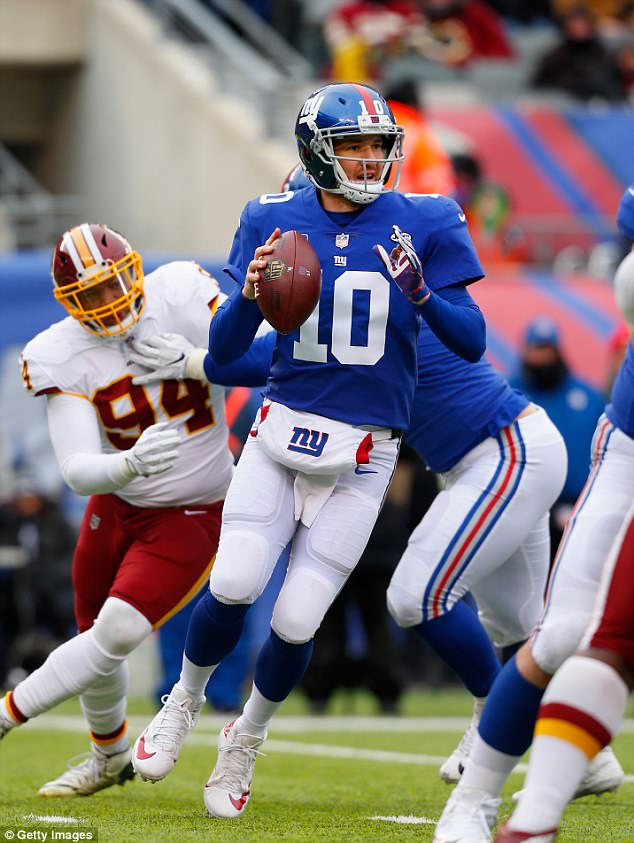 Shurmur’s NFL coaching career began with a 10-year run (1999-2008) in Philadelphia. He coached in college at Stanford and Michigan State. 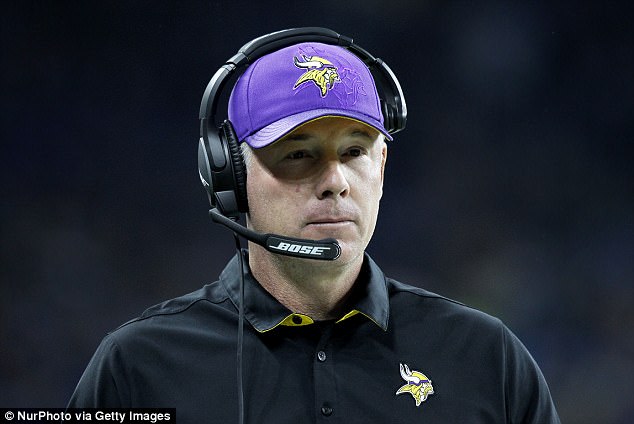