New York has the worst access to hospitals and the lowest-ranked centers in the US, study finds

Getting sick in New York may mean being treated in an overcrowded and under-performing hospital, a new study finds.

The Empire State has among the lowest number of hospitals per residents, according to an analysis of hospitals nationwide.

In a state with 19.5 million residents – nearly half of whom live in New York City – there was only one hospital per 100,000 people, compared to South Dakota which had 8.9.

Additionally, more than 40 percent of New York’s medical centers ranked below the national average in providing good quality care – while hospitals in the central and western US were more highly ranked.

New York and Maryland tied for first for worst hospital-to-population ratio at one hospital per 100,000 residents while

TOP 10 STATES WITH HOSPITALS ABOVE THE NATIONAL AVERAGE…

…AND BOTTOM 10 STATES BELOW THE NATIONAL AVERAGE

For the study, the team looked at data from the Homeland Infrastructure Foundation-Level, the Kaiser Family Foundation, the Centers for Medicare & Medicaid Services, and the Health Care Cost Institute.

Researchers then analyzed 7,570 hospitals – including general care, military, children and psychiatric centers – across all 50 states to measure cost, care and quality.

They found that states in the Midwest were much more likely to have a high ratio of hospitals to populations.

South Dakota came in first with 8.9 hospitals per 100,000 people, closely followed by North Dakota with 7.4.

Meanwhile, East Coast states had among the lowest number of hospitals, with New York and Maryland tied for first at one hospital per 100,000 residents.

But the researchers say that people in rural areas still battle to receive adequate care.

‘This is likely due to the nature of urban and rural areas, with urban areas having a higher population density,’ the new study’s authors wrote.

‘When a state’s population is in one area, a single hospital in a convenient location can be accessible to a large portion of residents.’

Researchers sat that mostly Central US and Western US hospitals ranked above the national average in measures such as use of medical imaging, mortality rates, readmission rates and timeliness. 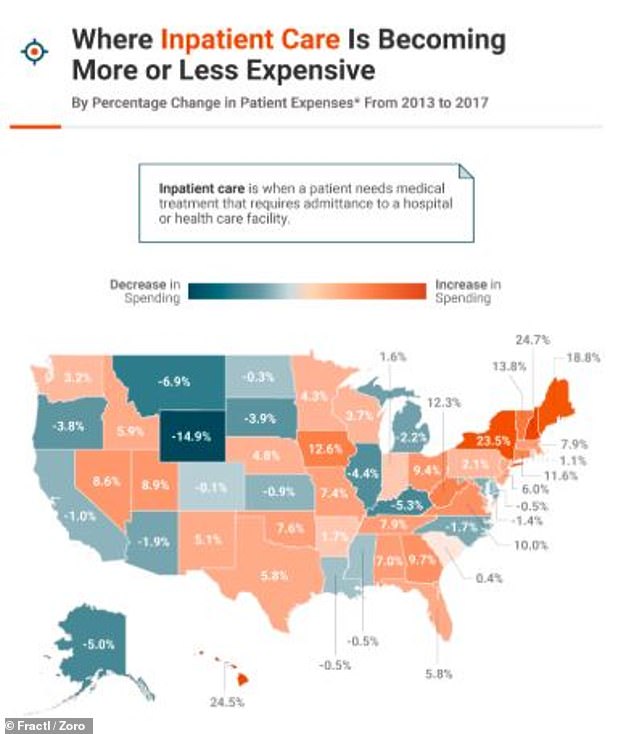 New Hampshire had the highest increase in inpatient out-of-pocket expenses rising by almost 25 percent from 2013 to 2017 at $1,166

Utah came in first with 40.7 percent of hospitals ranked above the national average, followed by Wisconsin, Idaho, Nebraska and South Dakota.

New York was named the state with the most medical centers ranking below the national average at 41.7 percent.

Rounding out the bottom five were New Jersey, Delaware, Nevada and Maryland.

But the new study’s authors say that the city’s public hospital system, NYC Health + Hospitals, has had financial due to layoffs and other cost-cutting measures.

The Northeast also dominated when it came to the largest increase in inpatient out-of-pocket costs.

Montana saw the biggest decline in inpatient out-of-pocket costs during the four-year period, even though patients are still paying an average of $1,209.