A New York man has been arrested after driving a Range Rover several hundred feet up a ski slope at a resort in Vermont on Friday evening.

Frederick P Bretcher, 59, was arrested and charged with driving under the influence (DUI) after he drove up Magic Mountain, in Londonderry.

Vermont State Police said it was the second time the man, from Shelter Island in New York City, had been charged with a DUI.

Officers were called to the mountain after workers at a nearby tavern spotted the Range Rover being driven up the ski trail on Glebe Mountain at around 11pm.

Craig Moulton, of Magic’s Black Line Tavern, told the Chester Telegraph, that they were closed for the night and about to go home when someone spotted the vehicle being driven up from the parking lot onto the hill.

‘He got a couple of hundred feet up the terrain park and turned around,’ Mr Moulton said.

Officers said the man had ‘displayed indicators of impairment’ upon being stopped and following additional testing was found to be over the driving limit and subsequently arrested. 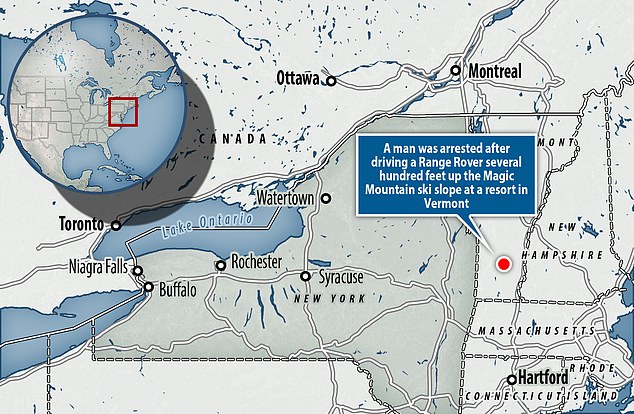 The man is due to appear in Windham County Superior Court on March 17 to face the charge.

A Magic Mountain representative told the local media outlet that the man had been driving a Range Rover as he attempted to go up the ski trail known as Hocus Pocus – a beginners skiing area.

He said the vehicle made ruts in the terrain, but it was repaired by the resort’s groomer.