Three years ago, it was being praised for being ‘on the up’ as projects helped reinvigorate local heritage, while new build homes, supermarkets, and thriving markets enhanced its revival.

Now, though, Prescot is at the centre of a war of words, after a damning story in The New York Times labelled the town as a symbol for Britain’s failures of austerity, in a new series called Britain’s Big Squeeze.

The article’s author, Peter S. Goodman, set the tone when he wrote that a stroll through this ‘modern town in the northwest of England amounts to a tour of the casualties of Britain’s age of austerity’.

Locals were quick to jump in to defend the town, which they say is ‘on the rise’. Their sentiments were echoed by the head of an economic think-tank who rubbished his observations.

Prescot’s new fire and police station. Christopher Snowdon pointed out: ‘A brand new police station was opened in Prescot in January, alongside a new fire station’

In his article, Goodman wrote: ‘The old library building has been sold and refashioned into a glass-fronted luxury home.

‘The leisure centre has been razed, eliminating the public swimming pool. The local museum has receded into town history. The police station has been shuttered.

‘As the local government desperately seeks to turn assets into cash, Browns Field, a lush park in the centre of town, may be doomed, too. At a meeting in November, the council included it on a list of 17 parks to sell to developers.’

But Monday’s article has caused fury in the town with residents, the local paper and an economic’s expert rubbishing his claims and painting a contrary picture to the doom and gloom presented in the story.

There was further scoffing at Goodman’s article in a series of tweets by Snowdon who pointed out: ‘For a start, a brand new police station was opened in Prescot in January, alongside a new fire station’

Goodman fired back, tweeting that the new police and fire station were a ‘consolidation. Moreover, people in the village feel a loss. If you want to argue with them, that’s fine’

Christopher Snowdon, head of lifestyle economics at right-wing think-tank, the Institute of Economic Affairs, said the article was ‘b******t’

He tweeted yesterday: ‘I haven’t got past the first two paragraphs of this NYT article about British “austerity” but I’m already getting a strong smell of b*******.

Snowdon said: ‘For a start, a brand new police station was opened in Prescot in January, alongside a new fire station. The museum moved to a new location in 2012 and appears to be still open. Prescot library was tweeting two days ago and I doubt it has closed in the meantime.’

Goodman fired back, tweeting that the new police and fire station were a ‘consolidation. Moreover, people in the village feel a loss. If you want to argue with them, that’s fine, but it’s a widespread perception in Prescot.’

Refusing to back down, Snowdon said the article described the police station as ‘shuttered’, to which Goodman replied that ‘it was indeed shuttered’, adding, ‘your beef is with Prescot residents who feel they have lost services’.

Also weighing in to the row – mostly waged on social media – was Philip Anderson who tweeted: ‘The historic town of Prescot is close to my heart. I was curate there, four happy years spent among the long-suffering people of the parish.

‘A recent NY Times article on austerity painted a gloomy picture of this proud community. Some Prescot people pretty angry about @petersgoodman’s article in the @nytimes yesterday.

‘It’s not that we defend austerity. We have suffered under it. But Prescot is on the up *despite* government cuts, and there’s a wave of investment on the back of the new theatre.’ 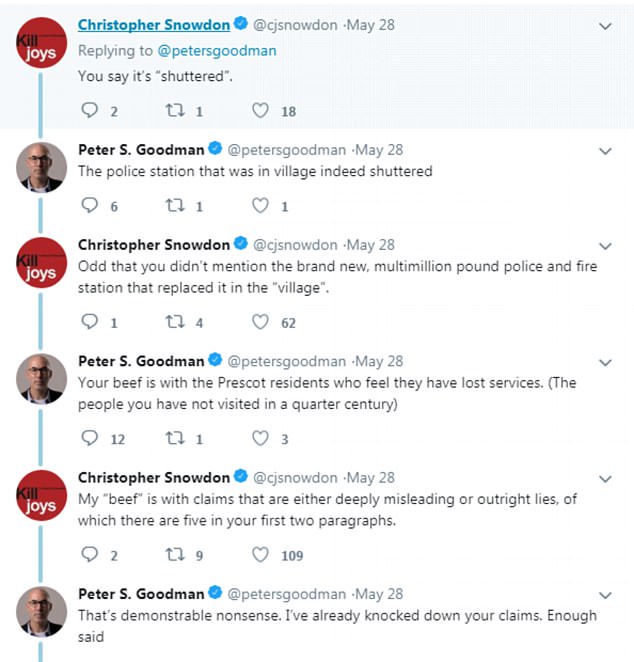 Snowdon said: ‘My “beef” is with claims that are either deeply misleading or outright lies, of which there are in your first two paragraphs.’

Others joined the lengthy spat on Twitter, accusing the writer of spreading fake news. One man tweeted: ‘Shhhh. The American knows our country and its issues better than anyone… we’ve all written articles with 5 errors in the first 2 paragraphs, jeez’.

The article fired off a heated debate across the ditch, with Goodman saying there were ‘no errors in the piece’

Goodman countered: ‘There are no errors in the piece, as has been covered voluminously by people in Prescot itself. And I would never pretend to know another country better than locals.’

In his article, Goodman, the European economics correspondent for the NYT, quotes local mum Jackie Lewis lamenting how ‘despondent’ she was about potentially losing ‘our last piece of community space’.

The piece includes references to councils throughout the UK suffering swingeing funding cuts from the national government, adding: ‘By 2020, reductions will produce cuts to British social welfare programs exceeding $36 billion [£27 billion] a year compared with a decade earlier, or more than $900 [£680] annually for every working-age person in the country.’

Local media including Prescot Online had its say on the US take on life in their town, in an article stating that the area has been ‘on the up’: ‘We’ve felt the effects of government austerity in Prescot, and we’ve lost some things. But we are gaining a lot, too, and Prescot’s future hasn’t looked this promising for decades.

‘And that is why this story in Monday’s New York Times tells only half the story’. 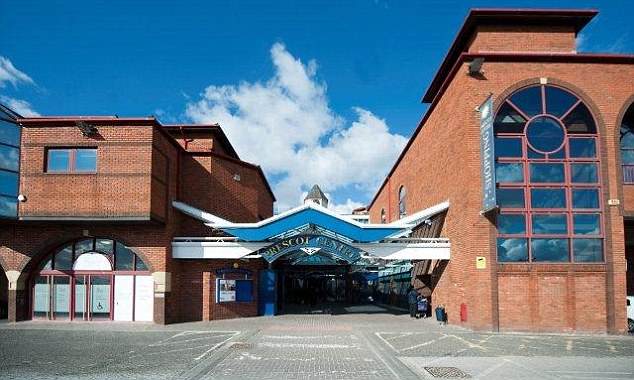 @TheBardPrescot tweeted: ‘Prescot is positively changing and that doesn’t show in the article. Still lots of issues like any other town but #WeBelieveinPrescot!’

Other people also weighed, with ‘@TheBardPrescot tweeting: ‘Prescot is positively changing and that doesn’t show in the article. Still lots of issues like any other town but #WeBelieveinPrescot!’

Meanwhile, the Liverpool Echo also questioned whether labelling Prescot as representing Britain’s austerity failures on NYT’s front page was a ‘fair picture of the town and its people’.

‘The article suggests Britain’s community spirit is being battered by cuts. But despite the austerity crisis, Prescot remains a strong and proud community,’ it added.

Prescot, in Merseyside, is located less than 10 miles from Liverpool. About 15,000 people live in the area.

Centuries ago, cotton was manufactured there, but the industry died out. There was also once a sail-cloth factory, and coal mines – which have all long closed.

In 1840, the district was noted for its ‘superior construction of watch tools’, while clay in the area was used for coarse earthenware.

Currently, Prescot is building a replica Elizabethan theatre, with 350 seats, as part of an array of projects in the town, which the local council will provide visitors with a ‘thriving attractive destination. 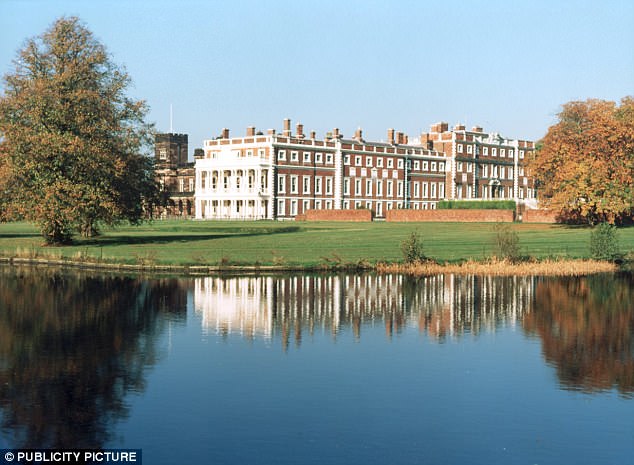 Private walled estate and stately home Knowsley Hall, above, in Prescot is considered a Merseyside icon 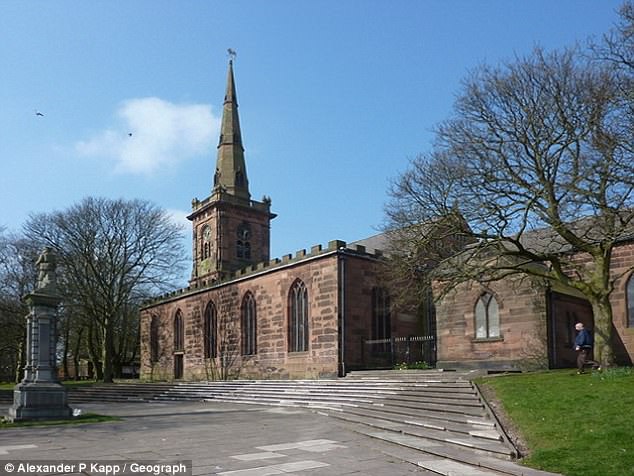 Prescot: Peter S. Goodman set the tone when he wrote that a stroll through this ‘modern town in the northwest of England amounts to a tour of the casualties of Britain’s age of austerity’