From March 1 to May 1, about 420,000 residents of the Big Apple left, particularly from the wealthiest neighborhoods, reported The New York Times.

While there was relatively little change in some zip codes, others such as SoHo, the West Village, Morningside Heights, the Upper East Side, the Financial District, Midtown, Gramercy and Brooklyn Heights emptied by at least 40 percent.

Income was perhaps the strongest indicator of how many residents in a particular neighborhood had fled.

NYC has been the epicenter of the U.S. outbreak with more than 186,000 cases of coronavirus and more than 15,300 confirmed deaths with at least 5,000 more probable deaths.

Five percent of New York City’s population, or 420,000 people, left between March 1 and May 1 amid the coronavirus pandemic, mostly wealthy. Pictured: A view of Open Streets around Times Square in New York City, May 9 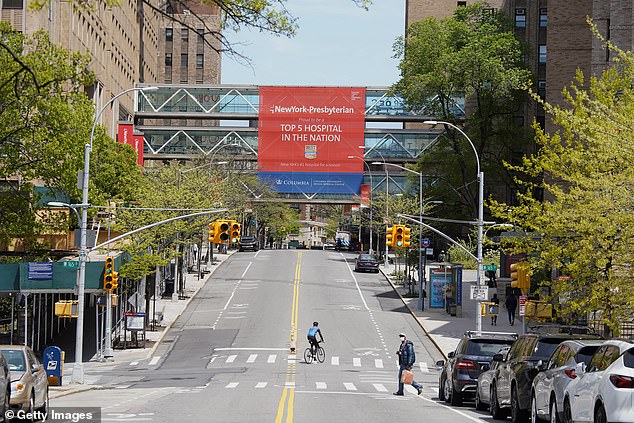 Some neighborhoods such as the Upper East Side and the West Village emptied by at least 40%. Pictured: Streets are deserted at New York Presbyterian Hospital in Washington Heights, May 10 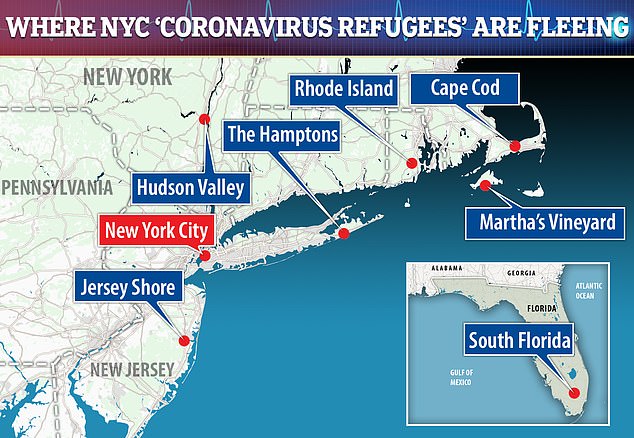 For its report, The Times looked at data provided by New Mexico-based Descartes Labs, a geospatial imagery analytics company.

The company used anonymous smartphone geolocation data to track where New York City residents were in February, and whether they left the city or not after the pandemic.

The sample population was 140,000 people from nearly every census-counted neighborhood in the five boroughs.

While smartphone data is not perfect, and not every resident owns a smartphone, it provides a general idea about New Yorkers’ mobility.

Between March 1 and March 15, there was a small trickle out of New York. But, after Bill de Blasio announced the city’s schools would be shut, there was a mass exodus.

The Times found that residents from neighborhoods where the median income is $90,000 or less (the bottom 80th percentile) stayed in their homes.

However, more than one-third – 35 percent – of the top one percent –  escaped to summer homes in Long Island, upstate New York, or other states.

The data is consistent with other reports of wealthy New York City residents having fled.

People that live in vacation towns, such as the Hamptons in Long Island and the Catskills in upstate, complained that their grocery stores were being emptied by city people who were living in their summer homes.

And The City reported that communities such as SoHo, Chelsea, the West Village, the Lower East Side and Fordham saw a drop in garbage tonnage by up to five percent.

However areas with more middle-class residents, such as Astoria in Queens, saw an increase in trash by around 12 percent.

The Times found these numbers to be consistent with two other papers it looked at, one from NYU and another from a company that looks at cell phone tower data.

So what does this reveal about who is living the city?

The residents of these wealthy neighborhoods where more than 25 percent fled are overwhelmingly white, about 68 percent, according to the newspaper.

However, this is not representative of New York City’s populations because less than half the city – 42.7 percent – is white, according to US census data.

This means that neighborhoods mostly made up of blacks, Asians and Hispanics mostly went changed.

More than three-quarters of these neighborhoods have residents will college degrees or higher and rents of more than $2,000 per month.

Residents who didn’t flee are often in neighborhoods where most have a high school degree or less and pay about $1,500 per month in rent. 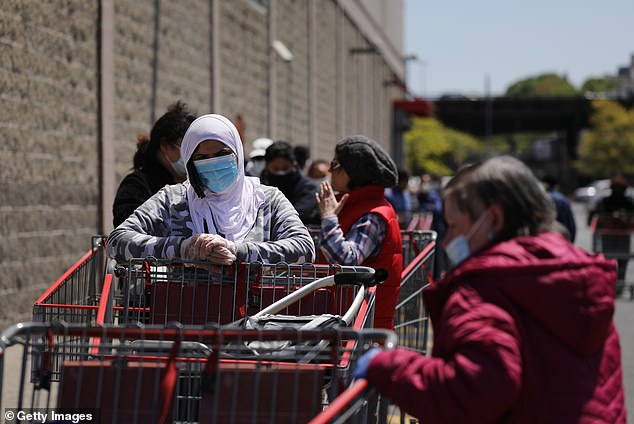 Residents who fled typically were white, had college degrees or higher and earned incomes of more than $100,000 compared to poorer neighborhoods. Pictured: People wait in line outside of a Costco in Brooklyn, May 14 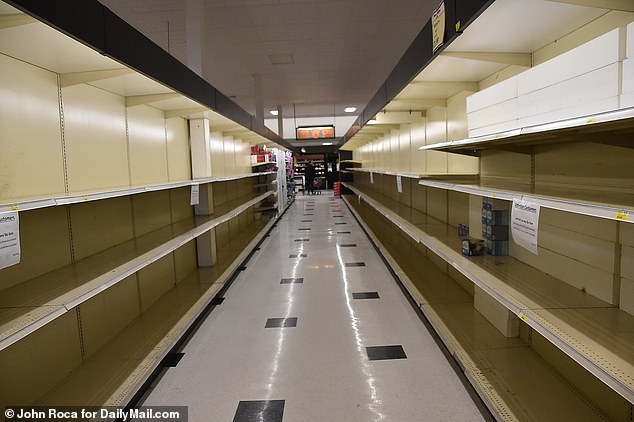 Empty selves in King Kullen in Bridgehampton as New Yorkers fleeing from the coronavirus hotspot are putting more pressure on grocery stores and locals struggle to find the supplies they need because of dwindling supplies, March 31 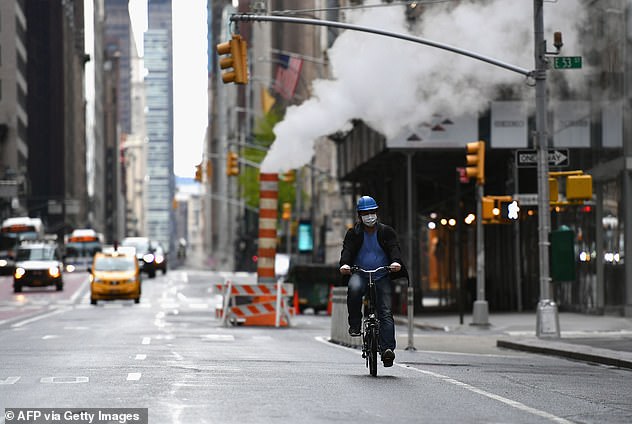 The data showed that New York City’s total population decreased by 5.2 percent and Manhattan’s by 18.6 percent. Pictured: A person wearing a hardhat and face mask rides a bike in New York City, April 21

Most telling, however, was the median household income.

‘There is a way that these crises fall with a different weight on people based on social class,’ Dr Kim Phillips-Fein, a history professor at New York University, told The Times.

‘Even though there’s a strong rhetoric of: “We’re all in it together,” that’s not really the case.’

Most New Yorkers did not go far. The Times analysis found that, when they escaped, they mostly went to Nassau or Suffolk County in New York, Martha’s Vineyard, Cape Cod, Rhode Island, northeastern Pennsylvania and southwestern Connecticut.

However, there were a few pockets across the US that became more populated with New Yorkers including southern Florida; Los Angeles, California; Phoenix, Arizona; and Chicago, Illinois.