‘Now we can’t even think about having kids’: Bride whose worrying lumps were dismissed by doctors as FAT is told she has deadly stage-four skin cancer

A young woman has been left fighting for her life after a doctor mistakenly dismissed cancerous lumps on her legs and feet as fat.

The New Zealand woman, who was studying to be an early childhood teacher, is now in the fight of her life as she battles the disease.

There is no cure for the aggressive cancer and it has already spread to her brain and lungs.

Ms Malins and her partner Brandon, 20, fast-tracked their wedding plans after getting the shattering diagnosis. 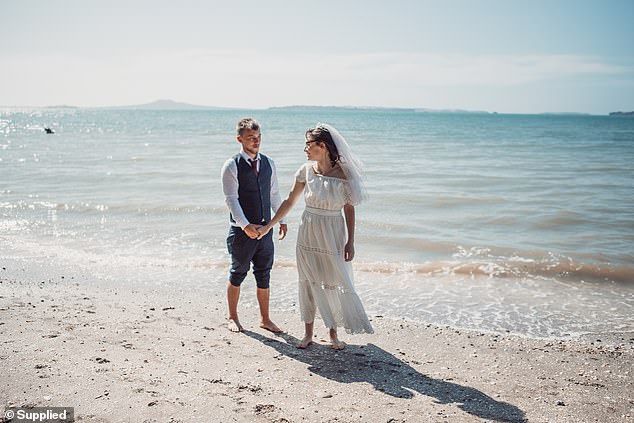 She and her partner Brandon, 20, fast-tracked their wedding plans after getting the shattering diagnosis

The couple tied the knot in a small beach ceremony in December 2019 after two weeks of planning.

Ms Malins described it as the most ‘perfect day’.

‘We fast tracked the wedding as we just didn’t know what the future held, we still don’t,’ she said.

Speaking to Daily Mail Australia, she shared how she has been left fuming because she first raised her concerns about the lumps with her GP a year earlier.

The first doctor she saw said the lumps on her legs were lipoma, a fatty tissue which can develop under the skin as people age.

The benign growths are rarely harmful. 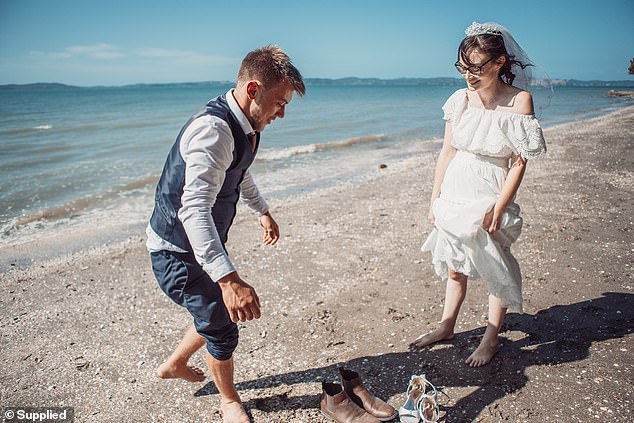 Brandon, 20, quit his job as a beekeeper to be by her side throughout the treatment (Pictured: The couple on their wedding day last year)

But as the growths spread throughout her body, Ms Malins grew concerned.

She went to a new GP who broke the news that the lumps could be more serious.

What is stage-four metastatic melanoma?

Stage 4 melanoma means the cancer has spread to other parts of the body, such as the lungs, brain, or other organs and tissue.

It may have also spread to lymph nodes that are a good distance from the original tumor. As such, stage 4 melanoma is often hard to cure with current treatments.

But she had to endure another three-month wait before she saw a specialist who confirmed the cancer diagnosis.

‘It was such a shock at the time I actually couldn’t even process it,’ Ms Malins said. ‘It changed our whole lives dramatically.

‘It’s frightening. I’m scared about dying all the time.

‘We had planned to have children, we have so much baby stuff that we’ve collected up but now we can’t even think about that.’

Ms Malins is now undergoing a type of immunotherapy called Keytruda, with a two-year plan in place.

Her husband has given up his beekeeping job to care for his wife while she fights for her life.

‘He’s been by my side for every treatment and every good and bad day,’ she said.

‘My husband has been a soldier.’

The couple are now hoping to raise money so Ms Malins can ‘tick items off her bucket list’ including horse riding, glamping and trips around New Zealand.

They have started a Givealittle page to raise money for their adventures.

A lipoma is a growth of fatty tissue that slowly develops under the skin. People of any age can develop a lipoma, but children rarely suffer from them.

A lipoma can form on any part of the body, but they typically appear on the neck, shoulders, forearms, arms and thighs.