A self-confessed ‘mad scientist’ from New Zealand who hand-crafted a yellow submarine is offering Airbnb guests a unique experience for $130 a night – and has been stunned by the array of people eager to spend a night inside.

Keith Lovelock and his wife Jen, a part-time nurse, live on a 100-acre section in Marton, which is situated in the North Island of New Zealand.

The pair run two Airbnbs – a tiny home that was previously a pump house and a two-story yellow submarine built by scratch by Mr Lovelock, a former radio technician.

‘It was a whimsical notion we thought was going to be our playhouse, but it’s taken on a life of its own. I was called a daydreamer at school,’ he told FEMAIL.

This yellow submarine is a two-storied getaway located within a grove of trees on a farm in Marton, New Zealand 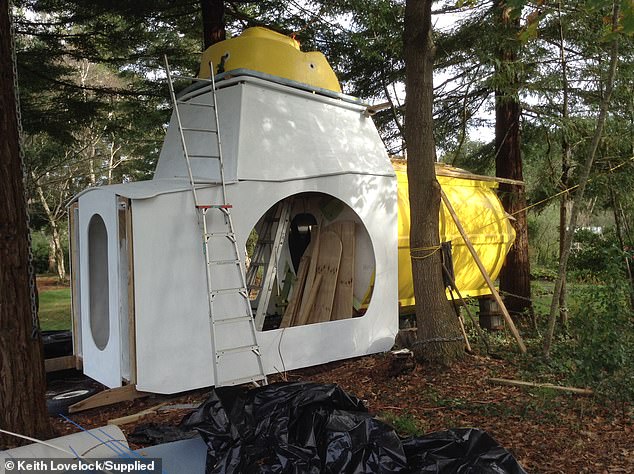 The sub was constructed from a range of recycled items, many of which came from Mr Lovelock’s sheds

‘I just started doing it for myself as a fun thing and I wasn’t even really sure what I wanted to achieve.’

The first element of the sub, a fibreglass silo, was found by accident by Mr Lovelock’s wife on Trademe (an online auction site) for $1.

After the pair travelled to collect it, they realised the would have to pay $320 to have the awkward item delivered to their farm. 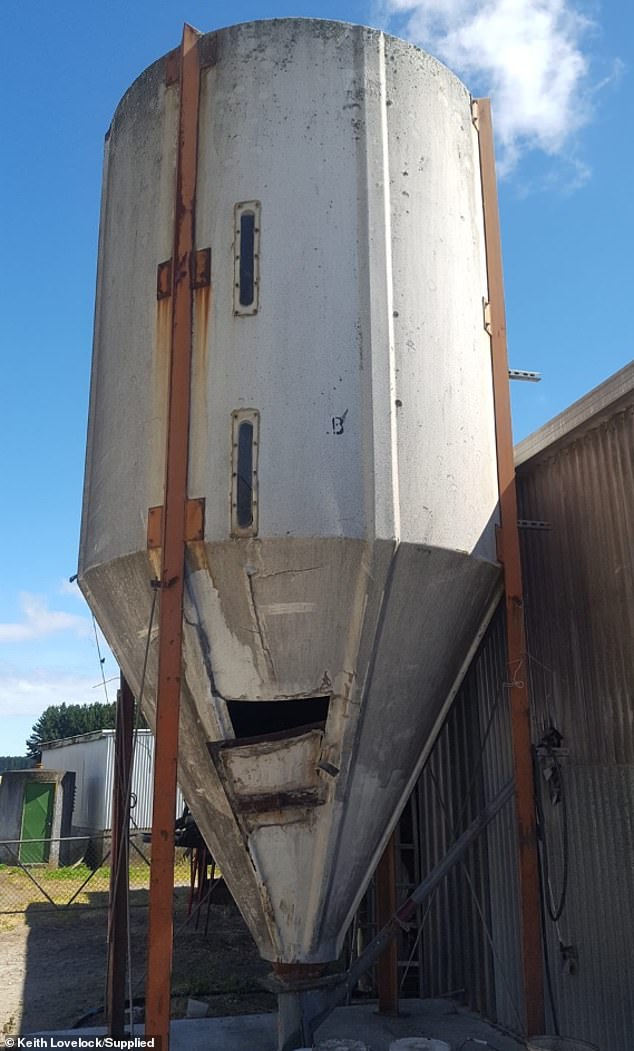 ‘I remember thinking, “Oh God, what have I done?” I had no idea how to construct a submarine. So it was a matter of looking at books and trying to figure it out,’ Mr Lovelock said.

‘Then I learnt it basically takes eight to 10 years to design a nuclear submarine and about a billion dollars.

‘But I did it in a year, by returning to my childhood.’ 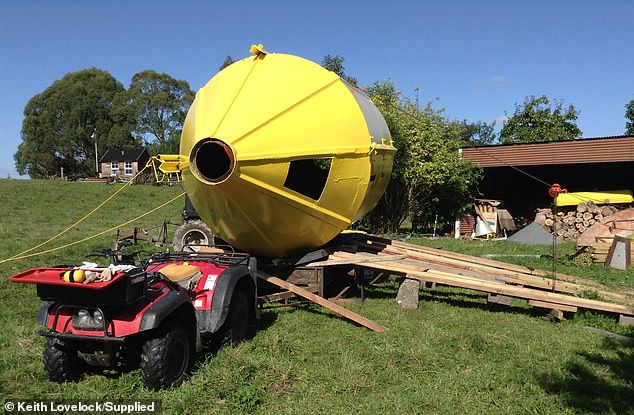 After the sub was purchased and thoroughly cleaned, Mr Lovelock had it painted yellow as he thought no one would want to stay in a grey vessel

The first thing Mr Lovelook did to prepare the silo for its transformation was to water blast it, then he painted it yellow because ‘no one would want to stay in a grey submarine’.

It was decided the silo – now called the fuselage – would be moved to its new home, among a grove of redwood trees to the rear of the property.

‘I wanted it to float in a sea of green – like lyrics from the Beatles song – suspended among redwood trees,’ he said. 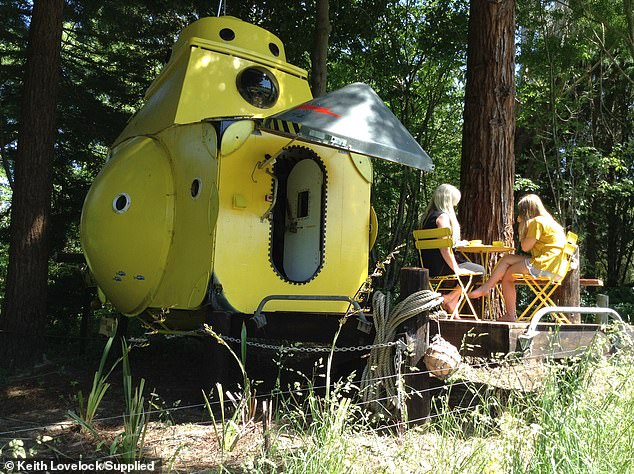 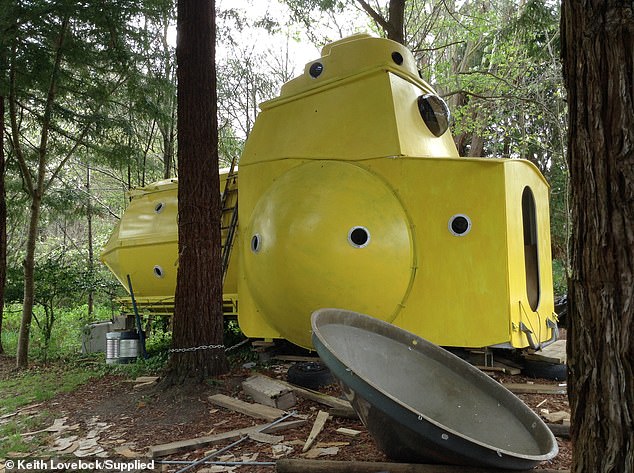 ‘I learnt it basically takes eight to 10 years to design a nuclear submarine and about a billion dollars,’ Mr Lovelock said

What is a conning tower?

* A conning tower is a raised platform on a ship or submarine.

Once located in its new environs, Mr Lovelock set to work building the front. This was done using ‘some old ray domes’ the former technician had spare.

Then to add to the shape, a large parabolic disk – another item that also happened to be gathering dust in Mr Lovelock’s sheds – was strapped underneath.

Working with a vision of creating a vessel that had bulbous shape, Mr Lovelock again turned to his sheds to uncovered a disused spa and repurpose this as a conning tower.

‘I have lots of sheds here,’ he said, ‘because being of Scottish ancestry, I don’t like to throw anything away.’ 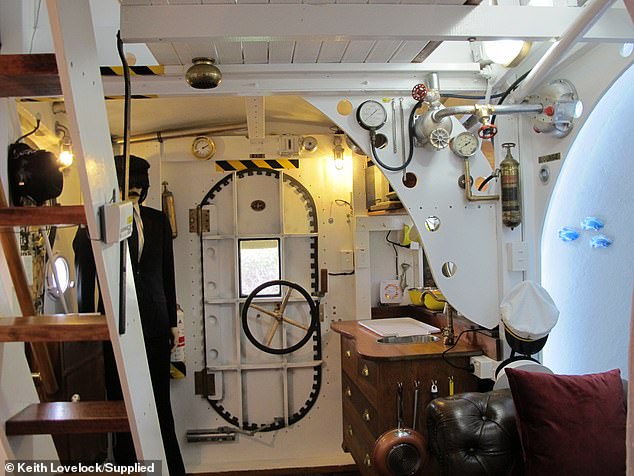 The submarine was built using a range of items sourced from online auction sites and in total the couple spent $20,000 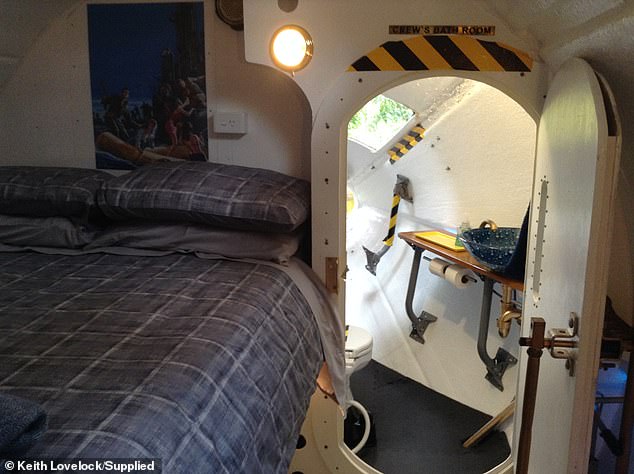 An extractor fan was added to the sub as its propeller. Along the way, the former radio technician added bits off old solar panels, television satellite dish mounts and aircraft flooring for an authentic looking creation.

In total, the Lovelocks spent $20,000 on the two-story structure.

The exterior of the sub is mostly fashioned from recycled materials with spending for the project largely dedicated to decorating the interior to make it as comfortable as possible for visitors.

Mr Lovelock proudly states the job was 100 per cent done by him although he said he was ‘egged on by my lovely wife who steered me in the right direction’. 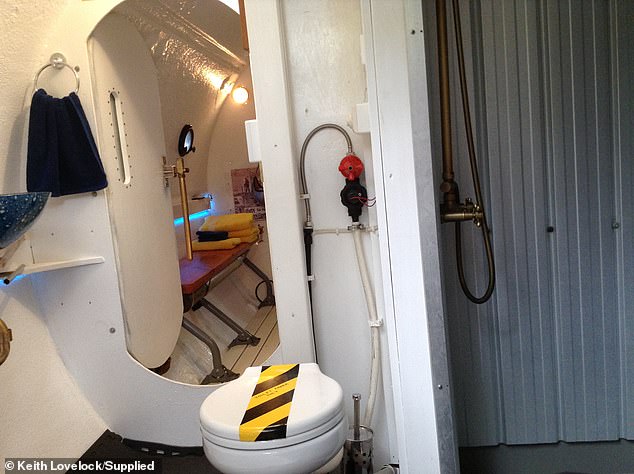 The unusual retreat has everything imaginable for a getaway, this includes a shower with hot water, a flushing toilet and running water

What facilities does the sub offer guests?

*Sleeping arrangements for up to four people; a double bed and a single bed

* Running water; a shower and toilet

* A variety of soundtracks to choose to suit your theme: Beatles, Cold War superpower scenario or World War ll U Boat

In the six months since the yellow submarine has been listed on Airbnb, bookings have ‘gone ballistic’.

‘The amazing thing is people just get into the theme of it,’ Mr Lovelock said.

He said as well as the Beatles-esque theme, there are three other influences at play.

These include a Cold War superpower theme, a World War ll U Boat theme and the Victorian trend, Steampunk.

‘We get Beatles fans who come and listen to all their hits and then there are those who love the claustrophobia of World War ll submarine. 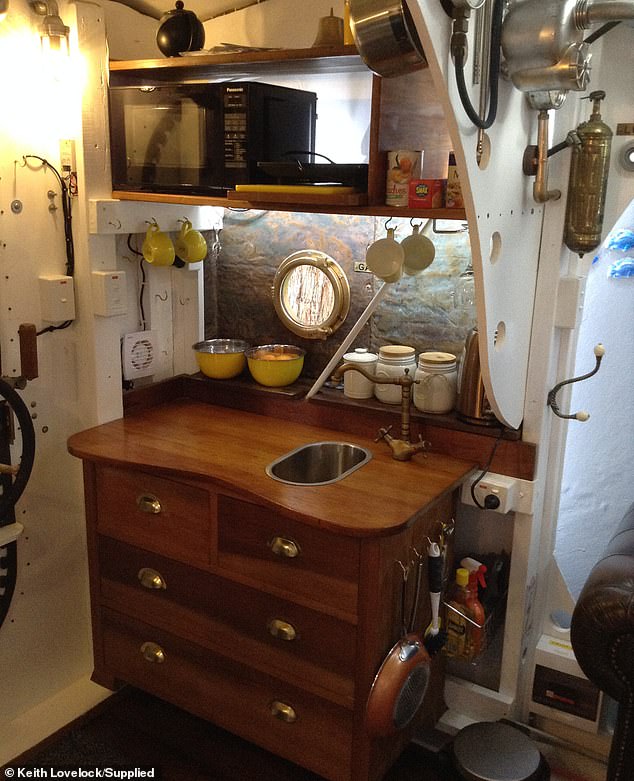 ‘Different people get different things from it. Kids come along and act like adults and adults come back and recreate their childhood.

Mr Lovelock said female guests tend to have the strangest response to staying in the sub and that inexplicably he has found the John Lennon mannequin in various states of disarray after they’ve departed.

‘Women seem to like to take off his clothes and do photoshoots with him because we quite often find his shirt isn’t put on properly or his arm isn’t the sleeve.’ 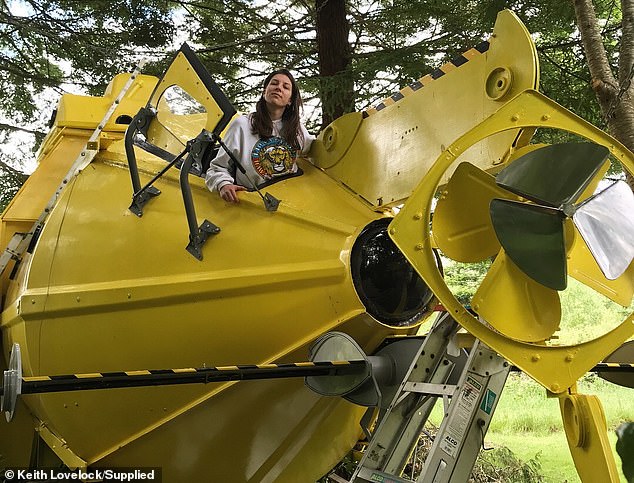 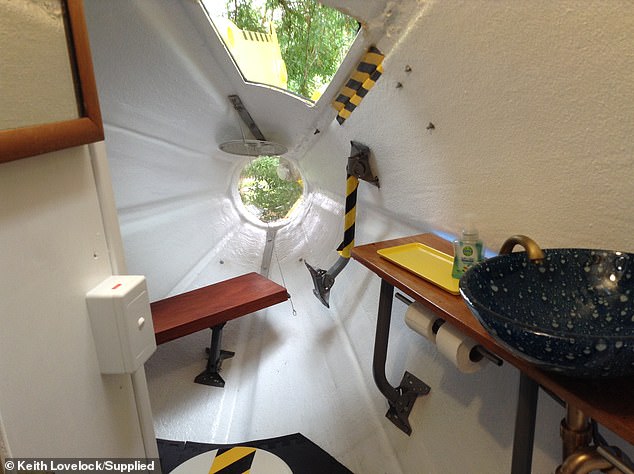 The handcrafted home isn’t ideal for those who feel claustrophobic

Despite the odd hiccup with John Lennon, and the occasional person who has ‘freaked out with claustrophobia’, reactions by guests have been overwhelmingly positive. 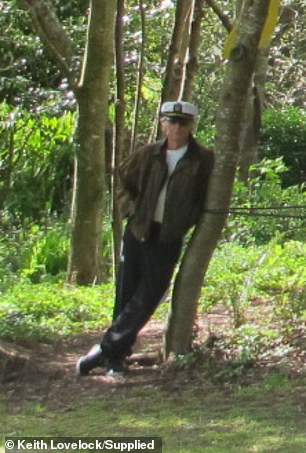 ‘We’ve even had the NZ Navy turn up. Divers came to stay with us because New Zealand doesn’t have a submarine.

‘It cracked me up that we had professional divers coming to a fake submarine,’ he said.

Mr Lovelock remembered other visitors to the sub whose kids had been told by teachers they been dreaming after they’d told them of their visit to his farm.

‘I guess it’s hard for some to accept an altered reality.’

While there aren’t any plans in the works for any other flights of fancy, Mr Lovelock said he loves to mess around and that as a dreamer, anything was possible.

‘My hobbies are disproving relativity and quantum mechanics – which keeps my brain occupied.