New Zealand has finally acknowledged what most other countries realised long ago, that it cannot completely eradicate Covid.

Jacinda Ardern is abandoning her draconian ‘Zero Covid’ strategy after admitting she cannot stop the spread of the Delta variant with harsh lockdown measures and aggressive contact tracing.

The Pacific nation, which has been slow to move on vaccines with only 40 per cent of the population fully jabbed, managed to eliminate the virus last year and stayed largely free until an outbreak of the Delta variant in August after a traveller returned from Australia.

The restrictions have been in place despite only a total of 27 deaths recorded throughout the pandemic.

The prime minister enforced what was meant to be a ‘short and sharp’ nationwide lockdown in response to the Auckland outbreak of the ‘game changer’ variant, which now stands at 1,357 cases.

But the harsh measures persisted in an effort to rid the country of the contagious strain, which have so far failed as an additional 29 infections were announced today.

Ardern told a news conference: ‘With this outbreak and Delta the return to zero is incredibly difficult.

‘This is a change in approach we were always going to make over time. Our Delta outbreak has accelerated this transition. Vaccines will support it.’

Ardern said a lockdown affecting 1.7million people in the biggest city Auckland will be scaled back in phases, with some freedoms introduced from Wednesday.

Amid mounting pressure, Ardern has said her strategy was never to have zero cases, but to aggressively stamp out the virus. 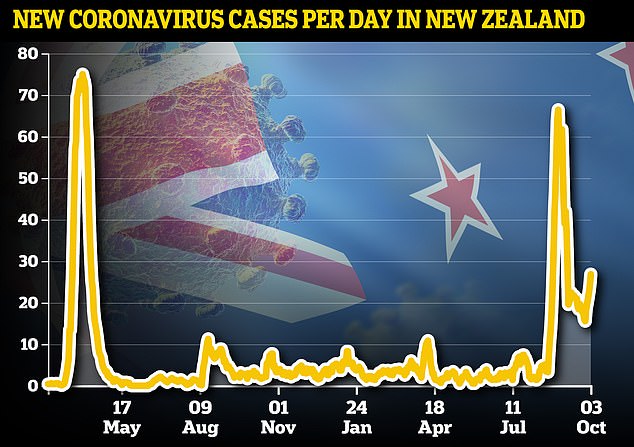 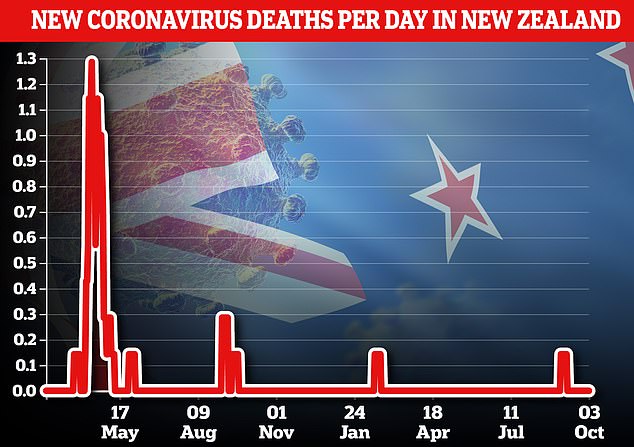 She said strict lockdowns will end once 90 per cent of the eligible population is vaccinated.

About two million New Zealanders have so far been fully vaccinated, or about 48 per cent of the eligible population.

The country began its vaccination campaign slowly compared with most other developed nations.

Ardern said the Delta variant felt like ‘a tentacle that has been incredibly hard to shake’.

‘It’s clear that a long period of heavy restrictions has not got us to zero cases. But it’s ok … elimination was important because we didn’t have vaccinations. Now we do. So we can begin to change the way we do things,’ she said.

People in Auckland will be able to leave their homes to connect with loved ones outdoors from Wednesday, with a limit of 10 people. People can go to beaches and parks, and also go hunting, Ardern said. 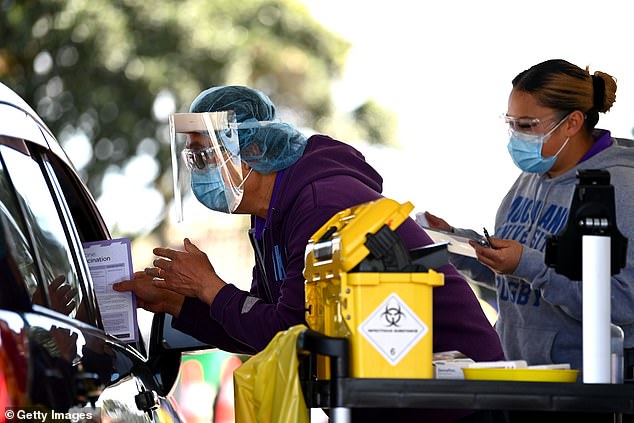 The dates for a phased reopening of retail stores and then bars and restaurants have yet to be decided.

Aucklanders turned to social media after the announcement, with many cheering the decision while others expressed concern.

‘I think if we’d been at 1-2 unlinked cases a day and/or no infections in community and no spread outside Auckland (and higher vaccination) I’d be cheering right now,’ one Aucklander said on Twitter.

Political parties on both sides slammed the move.

‘Jacinda Ardern has no answers to problems that she and her Government promised us were under control. The situation is now, very clearly, out of control and worsening every day,’ Opposition National Party leader Judith Collins said in a statement. 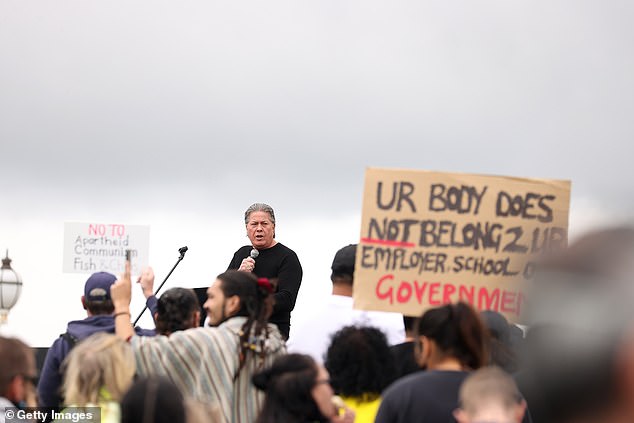 The government’s elimination approach through lockdown measures has been broadly supported but met with some resistance (pictured: an anti-lockdown and anti-vaxx protest in Auckland)

The government’s elimination approach had been broadly supported by New Zealanders but was facing increasing criticism. Over the weekend, hundreds of people turned out at rallies protesting against the lockdown.

Opposition legislator Chris Bishop said the government had no clear strategy to deal with the outbreak other than total surrender.

But Ms Ardern said most measures would remain in place to keep the outbreak under control, including exhaustive contact tracing and isolating those who got infected.

‘There’s good cause for us to feel optimistic about the future,’ she said. ‘But we cannot rush.’