A six-year-old New Zealand girl is fighting for her life after doctors discovered a malignant tumor taking up a quarter of her brain that has left her completely blind.

Paige Jury-Lynn, of Christchurch, is fighting what her parents have been told are a ‘couple of different cancers rolled into one’.

The cancer appears to be so rare that the tumour has been sent to Germany for diagnosis. Doctors have only given the young girl a 50 per cent chance to live.

But if it wasn’t for a visit to a local eye store, Paige may not have even made it to Christmas.

Six-year-old Paige Jury-Lynn, of Christchurch, New Zealand, has gone completely blind and is currently fighting both brain and spine cancers 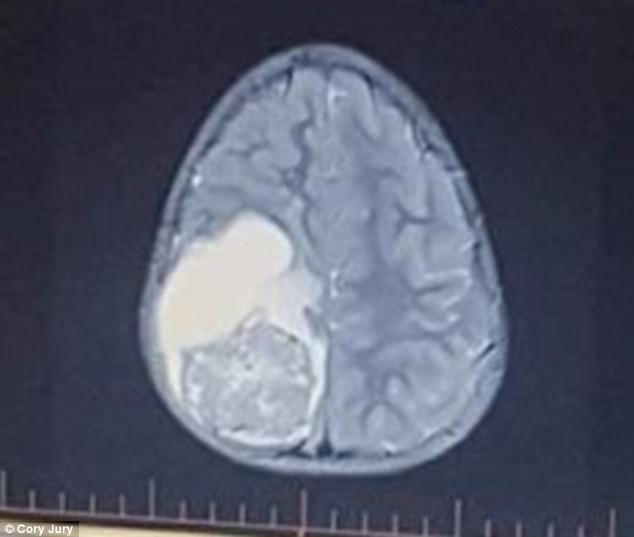 Paige’s symptoms began a year and a half ago, when the bubbly girl began to suffer headaches so terrible they would cause her to vomit and scream in pain.

Cory Jury, Paige’s father, told Daily Mail Australia that the family took her to see a doctor numerous times but were always told she was just suffering from migraines and sent home with vitamins.

‘We took her home and treated it as migraine symptoms, but they got worse,’ he said. ‘She would wake up at night, screaming.’

Katrina Jury-Lynn, Paige’s mother said she was made to feel like a hypochondriac. She researched her daughter’s symptoms online and begun to worry it could be serious.

On November 28 Paige’s condition significantly worsened and Cory, 34, and Katrina, 35, took her to the emergency department at Christchurch Hospital. 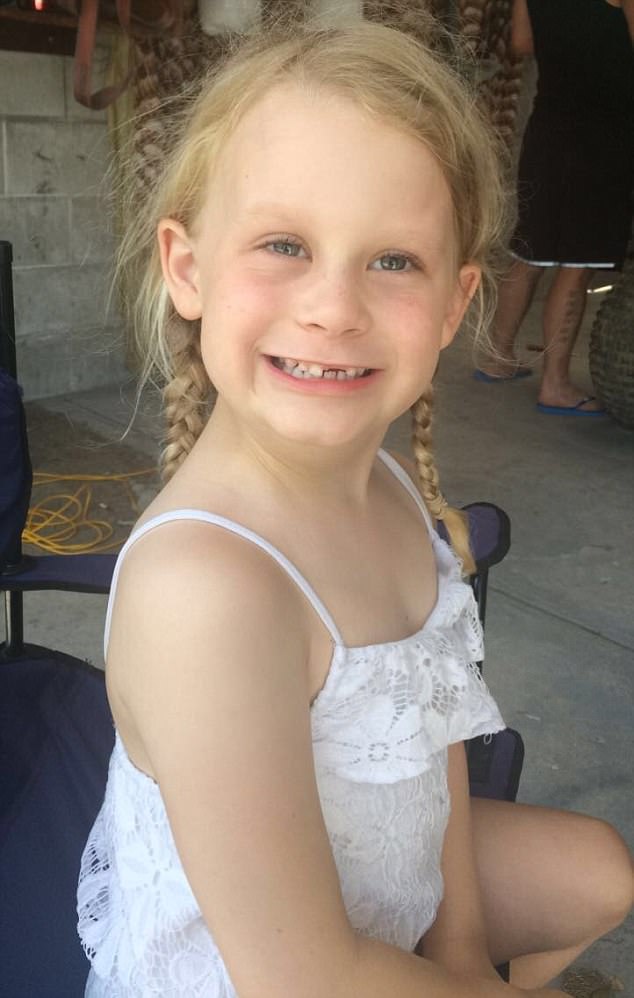 Paige’s symptoms began a year and a half ago, when the bubbly girl began to suffer headaches so terrible they would cause her to vomit and scream in pain 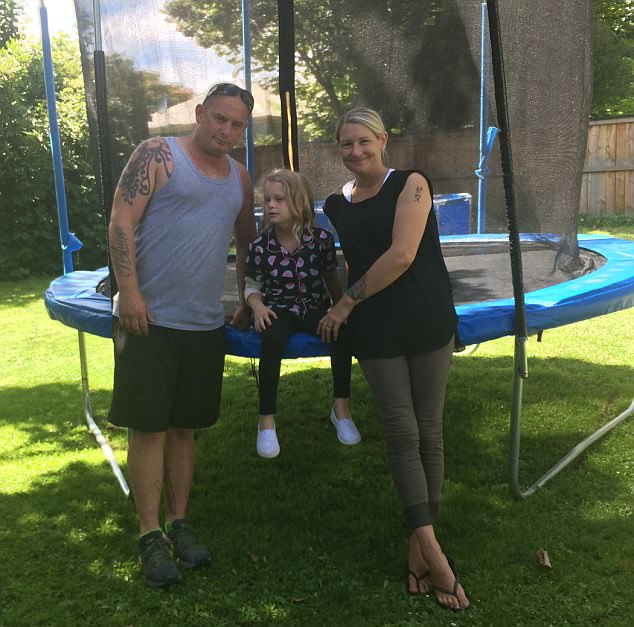 Doctors initially prescribed Paige (pictured with her parents Cory and Katrina) with migraines, but her symptoms took a turn for the worse in November

Cory said the hospital sent her home after a check-up and gave the family an appointment with a pediatrician the following month. 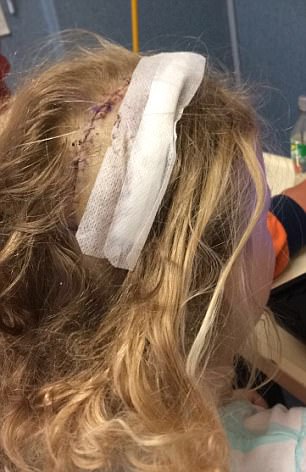 But just two weeks later Paige was getting even more headaches and started to suffer from eyesight loss.

Katrina took her to their local Specsavers, where an optometrist discovered she had a swollen optic nerve.

Paige went right back to Christchurch Hospital, where the family immediately got a referral and were booked for an MRI the next day.

Two hours later, they were given news that would completely turn their world upside down.

The MRI found a tumour that had spread to three quarters of the right side of Paige’s brain. There were also two malignant tumours on her spine.

Doctors told Cory and Katrina that Paige would only have days to live if she did not have emergency brain surgery, which was done the very next morning.

‘If it had been another couple of days to a week later, Paige wouldn’t be with us today,’ Cory said. ‘She would be dead by then.’ 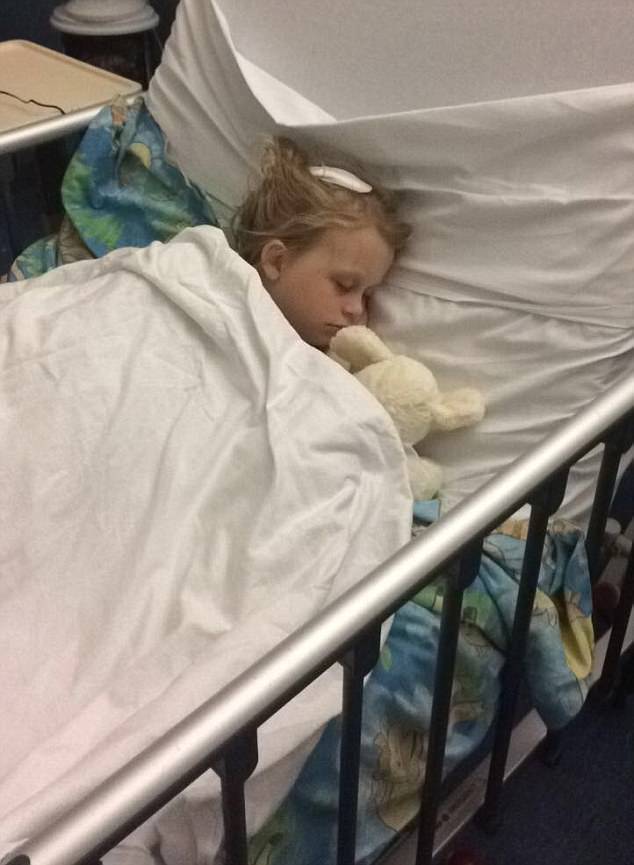 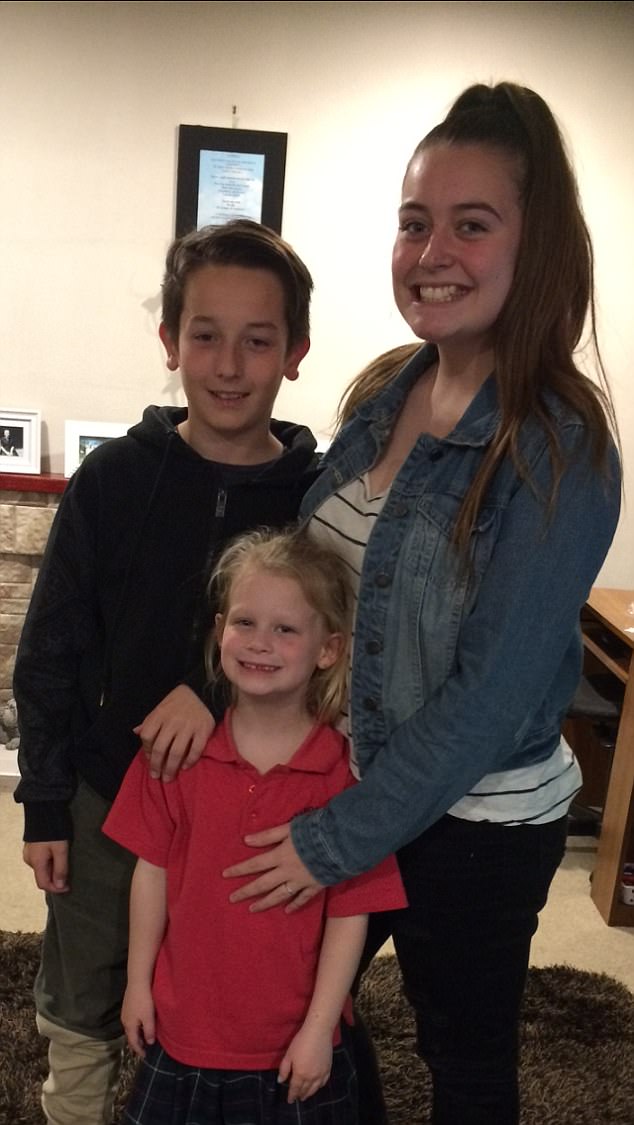 Cory said Paige’s six brothers and sisters, aged 16 to 11, have been doting on their youngest sibling and are trying to make her life as comfortable as possible

After the life-saving operation, Cory received a reminder for Paige’s scheduled pediatrician appointment – still weeks away.

Paige’s brain tumour was sent to Germany following the surgery, and doctors are holding off on chemotherapy until they know the exact diagnosis.

She is currently undergoing a six-week radiation treatment to try and shrink the tumours on her spine.

Cory said it has been extremely painful watching Paige’s condition deteriorate so quickly. 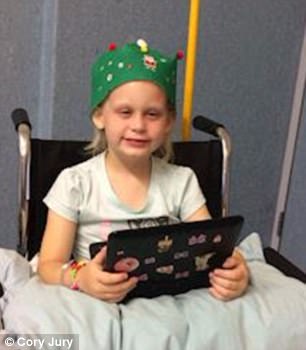 ‘What parent should have to see their child in so much pain?’ he said. ‘Seeing how big the tumour was, it’s unbearable.’

‘If I could take any of the pain she’s gone through, I would take it 100 times over and so would a lot of our family members.’

‘They’re in the same boat as us and going through all of this with us, not knowing if Paige is going to be okay.’

Cory said Paige’s six brothers and sisters, aged 16 to 11, have been doting on their youngest sibling and are trying to make her life as comfortable as possible.

Katrina has also had to leave her job so she can be with Paige at all times.

‘My wife doesn’t want to leave her side,’ he added. ‘We nearly lost our daughter. Everything has changed, our whole life has changed.’

‘We’re taking it day by day, and it hurts a lot. I can’t help my daughter.’

‘Dads are meant to be tough and protect their children no matter what, and I just can’t do that.’ 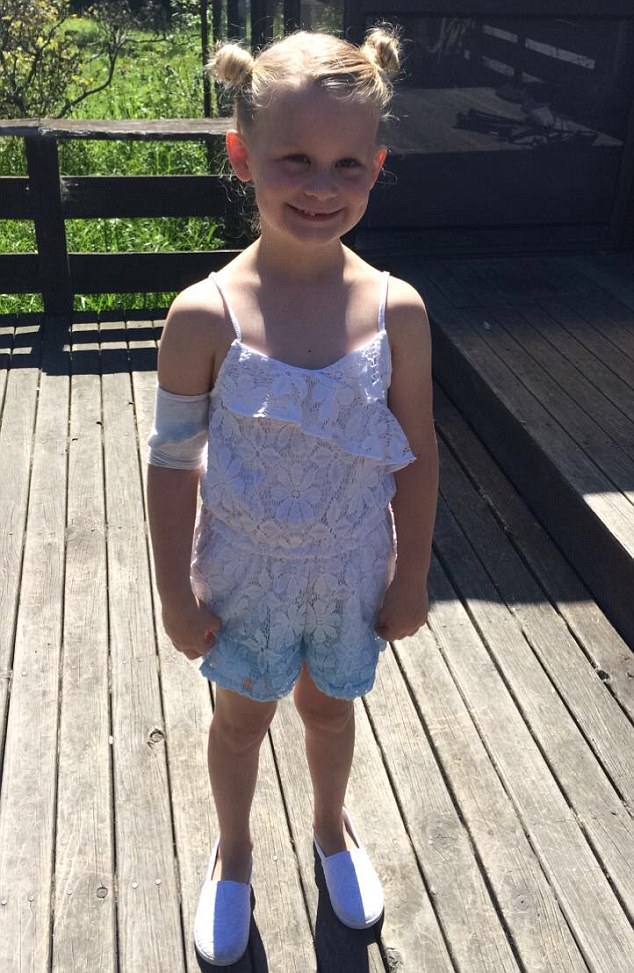 Paige’s brain tumour was sent to Germany and doctors are holding off on chemotherapy until they know the exact diagnosis. She has been given a 50 per cent chance of survival

Cory said that the family has been ‘very honest and open’ with Paige about what she’s going through, but that she’s ‘still carrying on life as if she’s fine’.

Relatives have begun a Give A Little fundraiser page for the family, and have already raised more than $7,000 for Paige.

Cory said the family are also planning to file legal complaints against Paige’s doctor and the Canterbury District Health Board.

‘We don’t want sympathy, we just want something done,’ he said. ‘Something needs to be looked at with the health system.’

‘I want my daughter’s case to be a lesson for the health system to wake up. If the cancer was found over a year ago, Paige’s tumour wouldn’t be as big as it is.’

‘I know it’s a misdiagnosis, but something needs to change seriously. It could have been my innocent, poor daughter.’

Daily Mail Australia has reached out to the CDHB for comment.

Cory said he hopes that, by sharing Paige’s story, he can show other people it’s okay to push for answers from their doctors.

‘With any doctors, if you ever have doubts – don’t be scared to get more advice,’ he said.

‘Don’t be scared to ask questions.’ 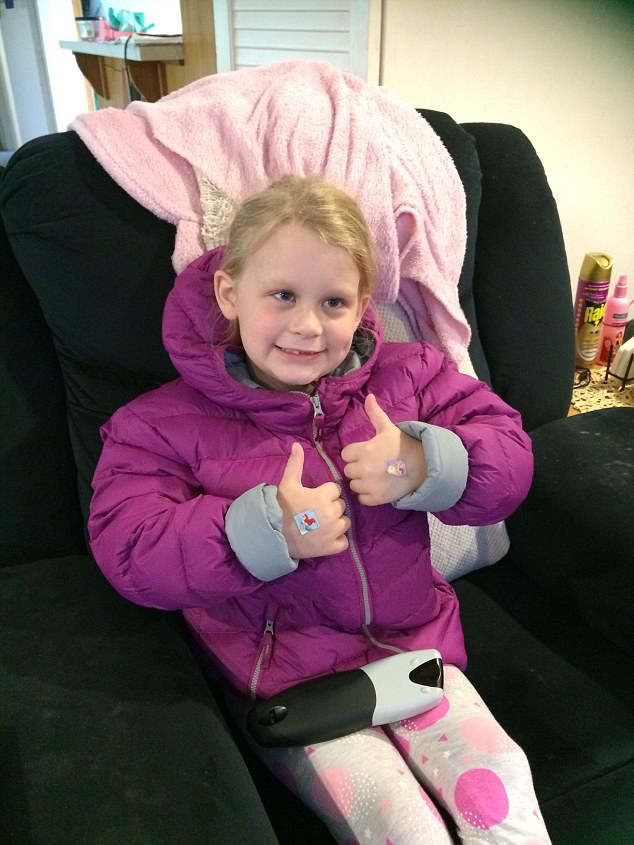 Cory said that the family has been ‘very honest and open’ with Paige, but that she’s ‘still carrying on life as if she’s fine’