New Zealand has won a battle against virus transmission: PM

New Zealand has ‘achieved elimination’ of coronavirus as Prime Minister Jacinda Ardern claimed the country has scored a significant victory against the spread of Covid-19.

The country has been following an elimination strategy with the goal of completely ending the transmission of coronavirus within its borders.

Rather than attempt to ‘flatten the curve’ of the virus, Ardern set the more ambitious task of ridding the virus completely from the island nation.

‘There is no widespread, undetected community transmission in New Zealand,’ Ardern declared on Monday. ‘We have won that battle.’

Ashley Bloomfield, New Zealand’s Director General of Health, said the low number ‘does give us confidence that we’ve achieved our goal of elimination. That never meant zero but it does mean we know where our cases are coming from.

‘Our goal is elimination. And again, that doesn’t mean eradication but it means we get down to a small number of cases so that we are able to stamp out any cases and any outbreak that might come out.’

After nearly five weeks at the maximum Level Four restrictions – with only essential services operating – the country will move to Level Three late on Monday.

That will allow some businesses, takeaway food outlets and schools to reopen.

Most of the population will still be required to remain on lockdown and avoid social interactions.

But Ardern warned there was no certainty about when all transmission can be eliminated, allowing a return to normal life. 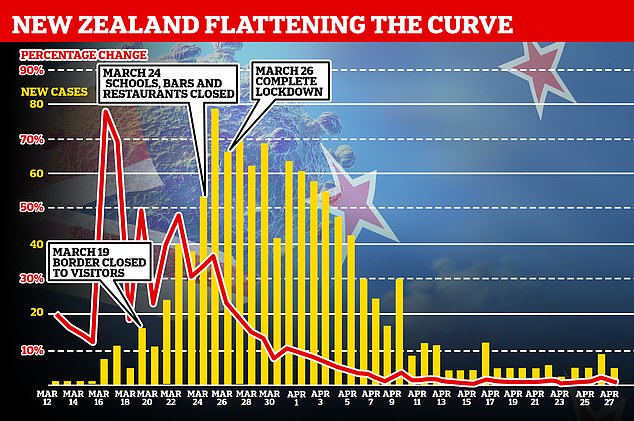 New Zealand’s efforts to flatten the curve have been very successful, leading to the country relaxing coronavirus restrictions on Monday night

‘I will not risk the gains we’ve made in the health of New Zealanders. So if we need to remain at Level Three, we will.’

She insisted at the daily government briefing: ‘We are opening up the economy, but we’re not opening up people’s social lives.’

The easing of restrictions came as New Zealand, a nation of five million people, reported only one new case of COVID-19 in the past 24 hours, taking the total to 1,122 with 19 deaths.