A KFC employee was yelled at and told to shave off his beard, which he used to hide facial scars he got during his battle with leukemia.

The man, known only as Ryan, wants an apology after he was humiliated in front of co-workers and customers in the New Zealand restaurant.

He grew the facial hair because he was self-conscious about his scars.

An employee at KFC was forced to shave his beard, which he used to hide facial scars he got during his battle with leukemia

‘At the start there was quite a bit of scarring. It has healed a bit now but it’s more mental, self-consciousness,’ Ryan told Stuff.

He was yelled at and threatened with disciplinary action in June, before being told to buy a razor and shave his beard off on the spot in the establishment.

‘I was quite upset, disturbed. It had never been a problem up until that day. I didn’t expect it at all.’

When Ryan refused, he was told to leave work, and was left without pay.

He penned a letter to head office, explaining his desire to hide scars caused by facial reconstruction as a child when he was diagnosed with leukaemia. 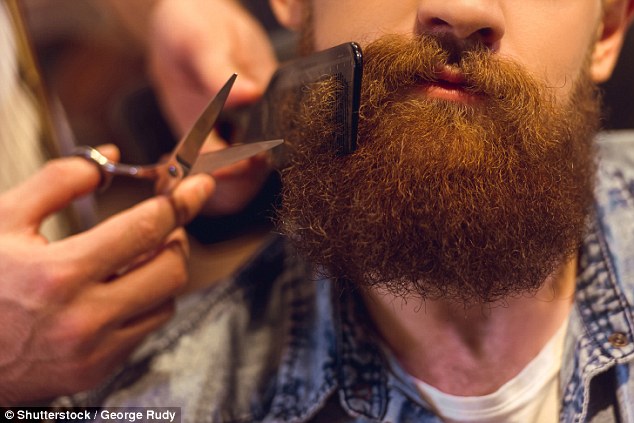 He was yelled at and threatened with disciplinary action in June, before being told to buy a razor and shave his beard off on the spot, in the establishment

In the letter, he noted that people with legal reasons, religious beliefs or current medical conditions were legally required to be provided with a hair net, or snood for facial hair.

He suggested he, too, should be offered the same leniency.

He said he had suffered bullying and harassment throughout his childhood due to his condition, and would not tolerate it in the workforce, as well.

In addition to an apology, Ryan wanted reimbursement for the lost day of pay.

While a KFC spokesperson confirmed the company was looking into Ryan’s complaint, he never received a response to his letter.

He has enlisted the help of Unite Union, which represents the food industry, to assist him in his case.

‘If [KFC’s] representatives cannot be trusted not to abuse blanket policies like this then they should take a closer look at their policies and how they are implemented at a store level,’ the union said in a statement.

‘The company has outright ignored a very serious complaint here.’