The speaker of New Zealand’s parliament has cradled a fellow lawmaker’s baby while presiding over a debate.

Trevor Mallard fed the six-week-old baby boy from a bottle and rocked him in his arms in the speaker’s chair during a House of Representatives session in Wellington.

The baby is the son of Tamati Coffey, a Labour MP and former television host, and his husband Tim Smith.

It was born to a surrogate mother in July, when Mr Coffey revealed how the baby’s two fathers were ‘dads overwhelmed at the miracle of life’.

The baby was born to a surrogate mother (left) in July, when Mr Coffey (centre) revealed how the baby’s two fathers were ‘dads overwhelmed at the miracle of life’

Fellow MPs praised Mr Coffey for bringing the baby into the chamber with him.

Green Party MP Gareth Hughes said: ‘Lovely to have a baby in the House, and what a beautiful one’.

His party colleague Golriz Ghahraman said: Who needs to see this today? Every single last one of us, that’s who.

‘Here’s a brand new papa holding his new born in our House of Representatives right now.’

At one stage Mr Coffey’s baby gurgled slightly in the arms of the smiling speaker, who continued with the debate.

Speaker Mr Mallard commented: ‘Normally the Speaker’s chair is only used by Presiding Officers but today a VIP took the chair with me.

‘Congratulations Tamati Coffey and Tim on the newest member of your family.’ 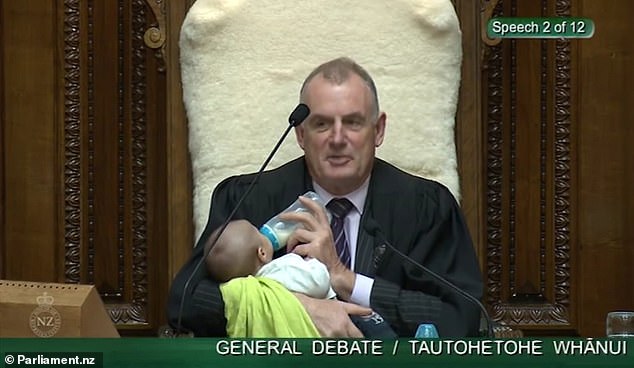 Speaker Mr Mallard fed the baby from a bottle (pictured) after it was brought into the chamber by Tamati Coffey, a Labour MP and former television host 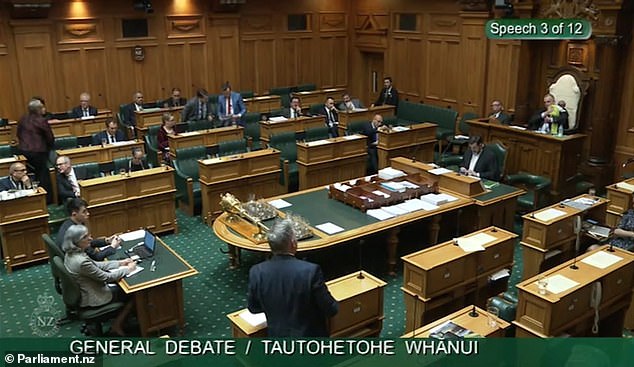 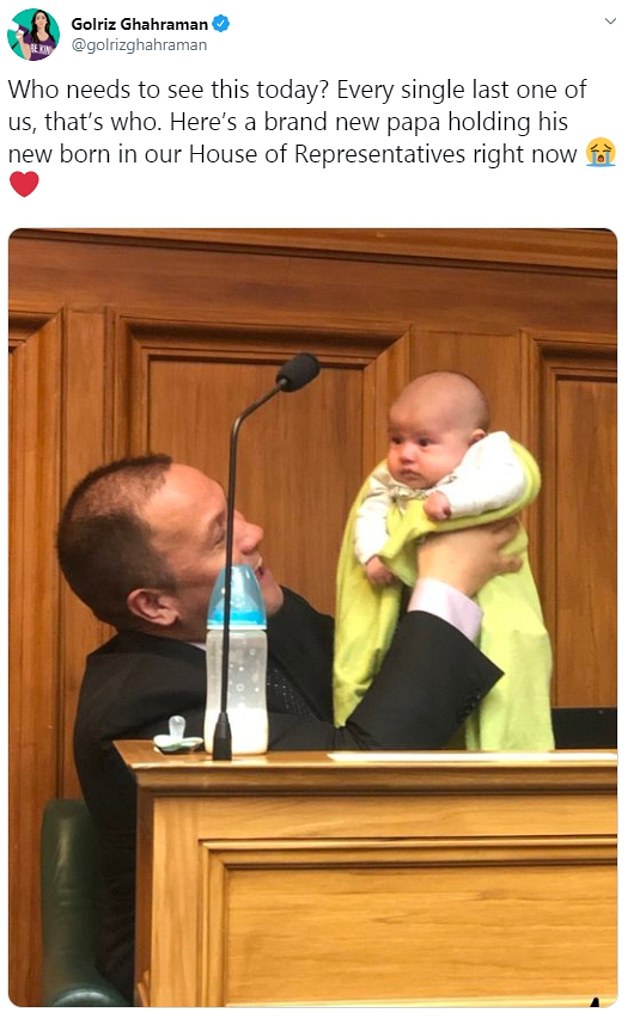 Mr Mallard, 65, has been speaker of the House of Representatives since November 2017.

Speaking to Newshub, Mr Coffey said: ‘I’ve felt really supported by my colleagues from across the House.

‘Babies have a way of calming down the intense environment of Parliament and I think we need more of them around to remind us of the real reason we are all here.’

The country’s PM Jacinda Ardern had a baby last year, becoming just the second elected world leader to give birth while in office.

Last September she brought the baby girl to the United Nations’ annual gathering in New York.

‘I’m combining my role as a mum and also as a leader and it is entirely possible to do both,’ Ms Ardern said at the time.