The Duke and Duchess of Sussex have been showered with sentimental gifts, flowers, handwritten letters, and even baby presents.

And on Tuesday, Meghan Markle and Prince Harry received a giant bouquet of flowers from an adoring royal fan in Auckland.

But two police officers were required to step in and carry away the seemingly heavy bunch of flowers during the third day of the royal tour of New Zealand.

Moments earlier, Prime Minister Jacinda Ardern was all smiles when she was spotted struggling to handle the large floral gift on her own. 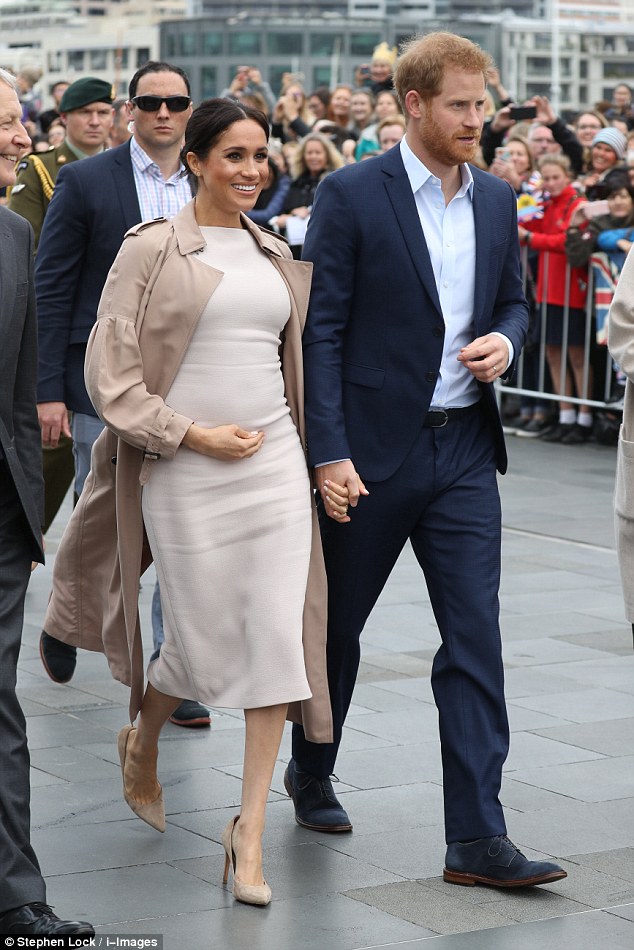 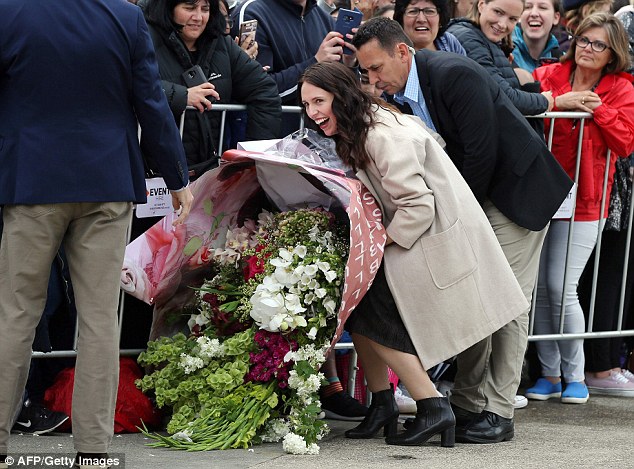 What do royals do with all of their gifts?

There is a very detailed royal protocol that marks what happens to all the gifts and gestures from well wishers – and the Duke and Duchess do not hang on to the items for long.

After saying ‘thank you’ and carrying the items for several seconds, the Duke and Duchess pass the soft toys, flower, cards, bottles and jewellery to a member of their entourage.

Then, one of several things happens.

The royal family’s official gift policy states that they can accept and use gifts from individuals, provided they cost less than GBP £150 (AUD $276).

These gifts have to be flowers, foodstuff and other consumable items, as well as other items of small monetary value.

Taking to Twitter, Jamie Samhan shared a video of the scene, saying: ‘Meanwhile…these officers aren’t sure how to handle this bouquet of flowers #RoyalVisitNZ.’

One person joked: ‘Oh my goodness! Are you sure there isn’t a small child hidden in there??

Another commented: ‘This is too cute! And to have stood there with this bouquet.’

And another joked: ‘That’s someone’s whole garden right there.’

Earlier on in the day, Prince Harry and Meghan cut casual figures as they arrived to dedicate a 20-hectare area of native bush to The Queen’s Commonwealth Canopy in Auckland.

The Duchess of Sussex donned a $575 (GBP £317) blazer by New Zealand designer, Karen Walker, which she paired with J. Crew Toothpick jeans and $219 (GBP £120) wellington boots by Muck.

Meghan accessorised her look with Boh Runga earrings, which were a present from the New Zealand president, Jacinda Ardern, and the Swirl Tattoo Diamond Pendant. 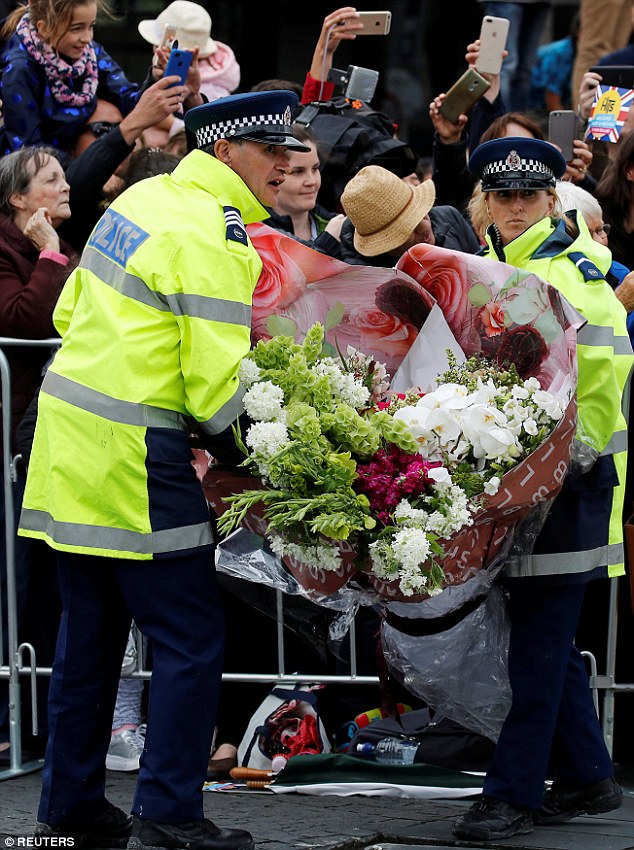 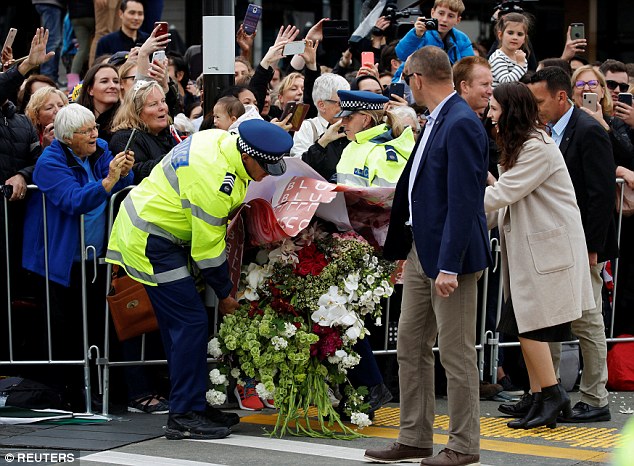 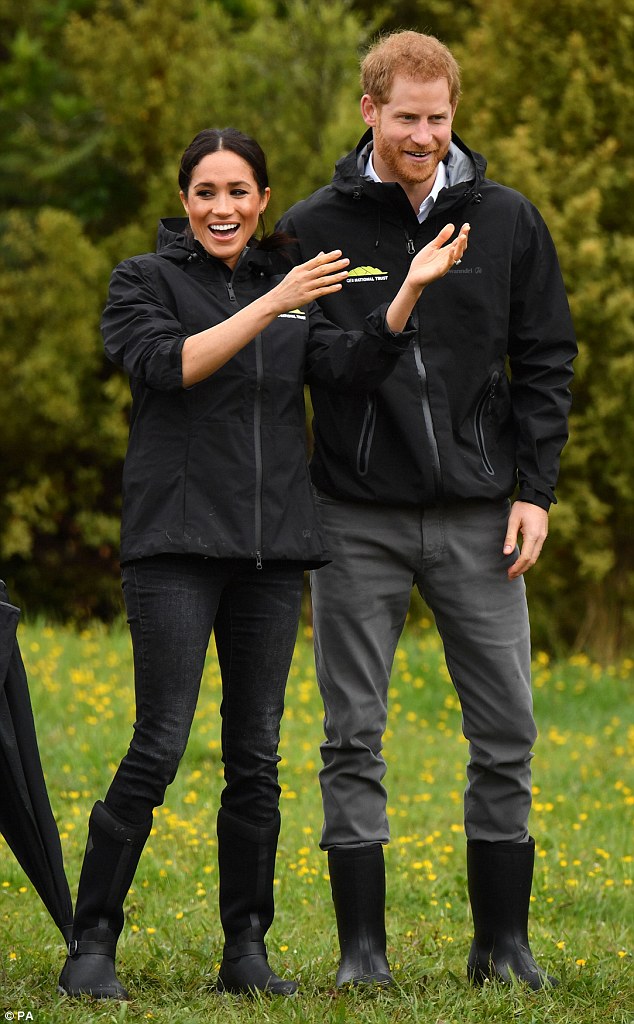 Earlier on Tuesday, Meghan donned a $575 blazer by New Zealand designer, Karen Walker, which she paired with J. Crew Toothpick jeans and $219 wellington boots by Muck

The couple unveiled a plaque on the city’s North Shore recognising the dedication to the QCC, which conserves indigenous forests for future generations.

The final day of their Royal Highnesses’ tour will take place in Rotorua on Wednesday.

The Duke and Duchess will head to Rainbow Springs to learn more about the centre’s kiwi breeding programme.

Later that afternoon, Meghan and Harry will head into the city for the chance to meet members of the public gathered there.

The royal couple then heads back to London.

New Zealand is the fourth country the royal couple have visited on their mammoth 16-day tour following visits to Australia, Fiji and Tonga.