Ms Ardern, 38, spoke at the United Nations General Assembly hall for the Nelson Mandela Peace Summit on Monday morning, New York time. She is expected to deliver a more wide-ranging speech on Thursday.

While her mother was speaking about what Mandela meant to New Zealand, three-month old Neve watched on, held by father Clarke Gayford, 40, who is the baby’s full-time caregiver.

The couple, who first met in 2012, were relatively media shy until Ms Ardern was made leader last year. A short time later the pair announced they were expecting their first child.

Following on from her talk, Neve was lucky enough to spend the rest of the session in her mum’s arms, watching other leaders speak 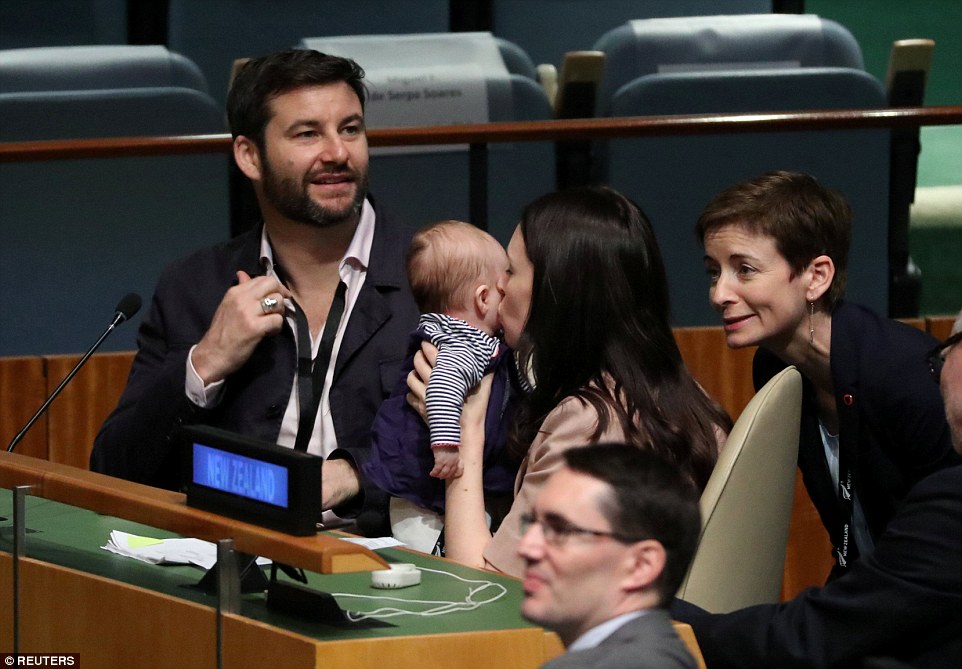 Baby Neve was a big hit at the United Nations general assembly hall on Monday, New York time. U.N. spokesman Stephane Dujarric said they were delighted to see her there 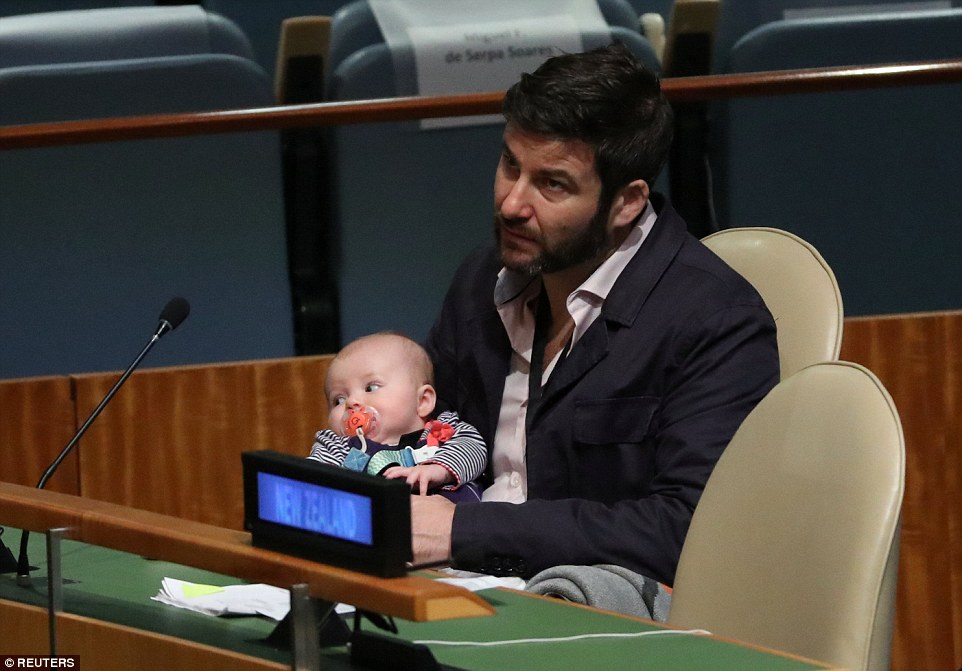 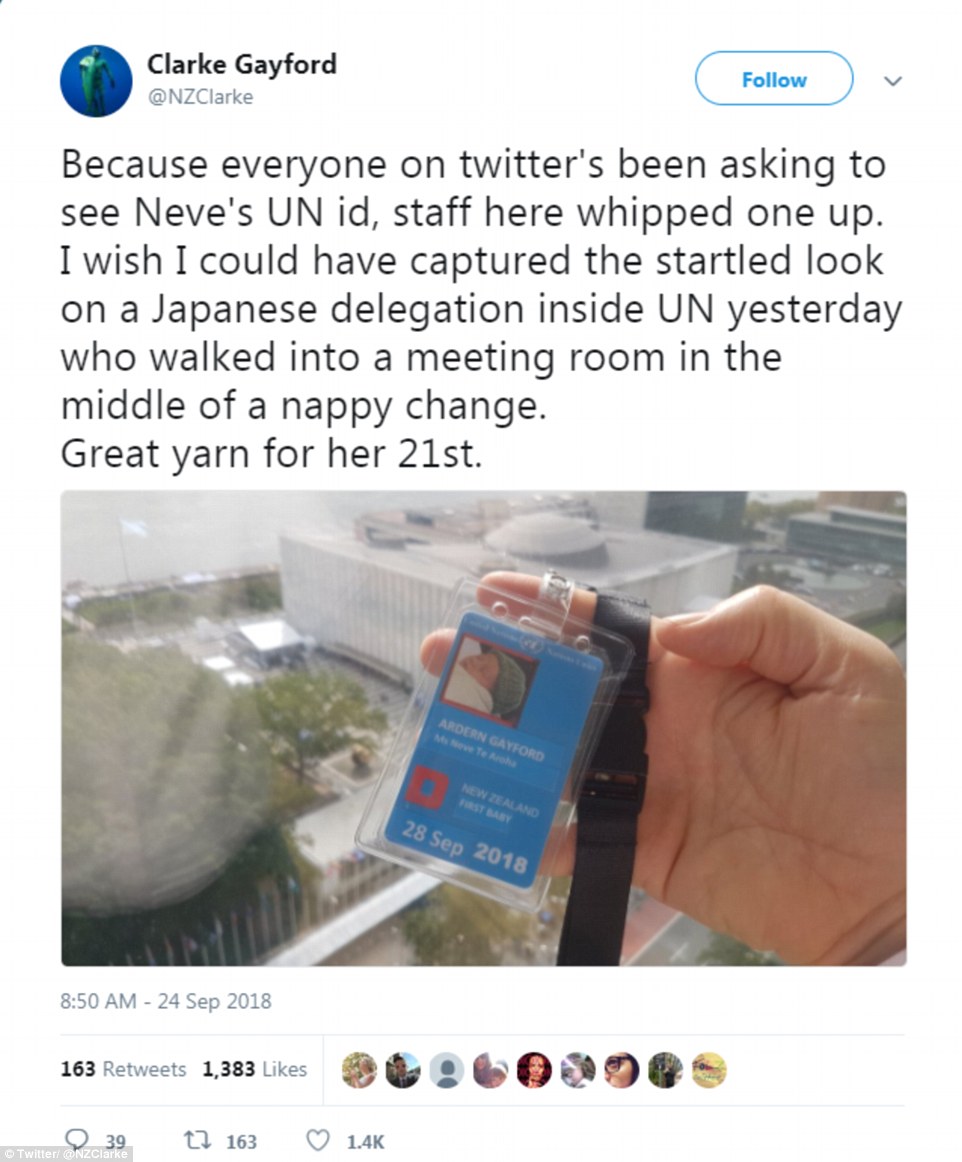 Ms Ardern spoke of Mandela’s ‘profound impact’ on New Zealand during her first speech at the summit, and shared how her father, who was a policeman, missed her first birthday because he was called to work during the mass protests opposing the 1981 Springbok Tour.

Following on from the speech, Neve was lucky enough to spend the rest of the session in her mum’s arms, watching other leaders talk.

Mr Gayford posted a photo on Twitter earlier on Monday of Neve’s security pass for the annual gathering of world leaders in New York this week.

‘I wish I could have captured the startled look on a Japanese delegation inside UN yesterday who walked into a meeting room in the middle of a nappy change. Great yarn for her 21st,’ he said.

Ms Ardren is only the second female world leader to give birth while in office, which has sparked huge fascination. Pakistan’s Benazir Bhutto was the first in 1990. 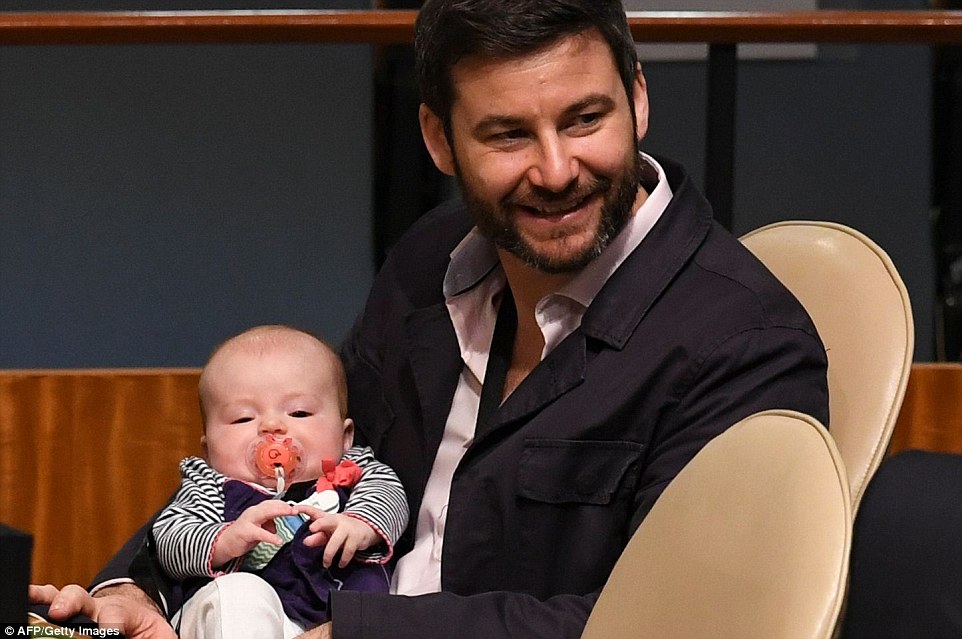 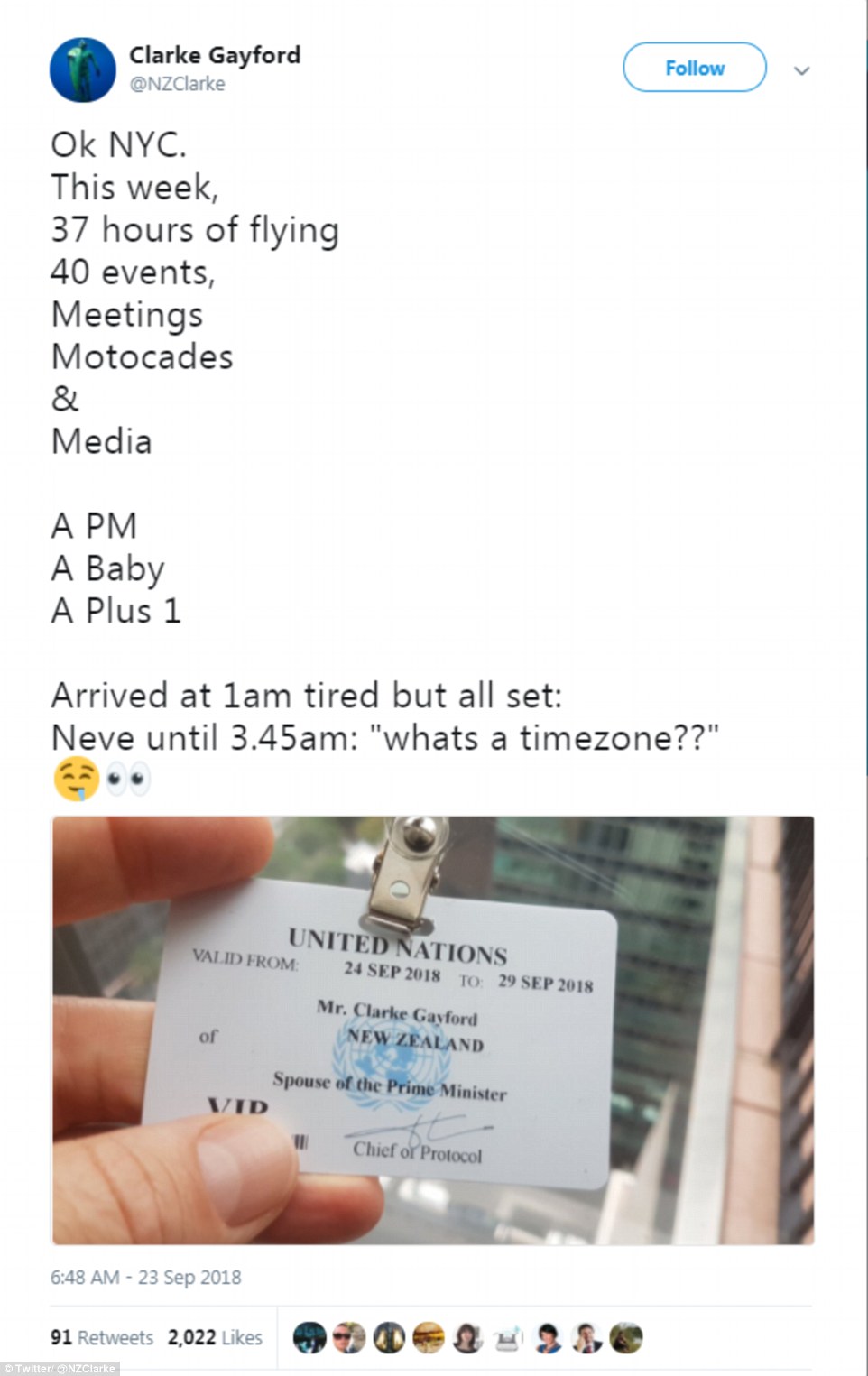 When Ms Ardern appeared on the Today Show in America, she shared that she apologised to passengers ahead of the flight to New York

‘Prime Minister Ardern is showing that no one is better qualified to represent her country than a working mother. Just five percent of the world’s leaders are women, so we need to make them as welcome here as possible,’ he said.

She spoke of her appreciation for parents and particularly solo mothers. 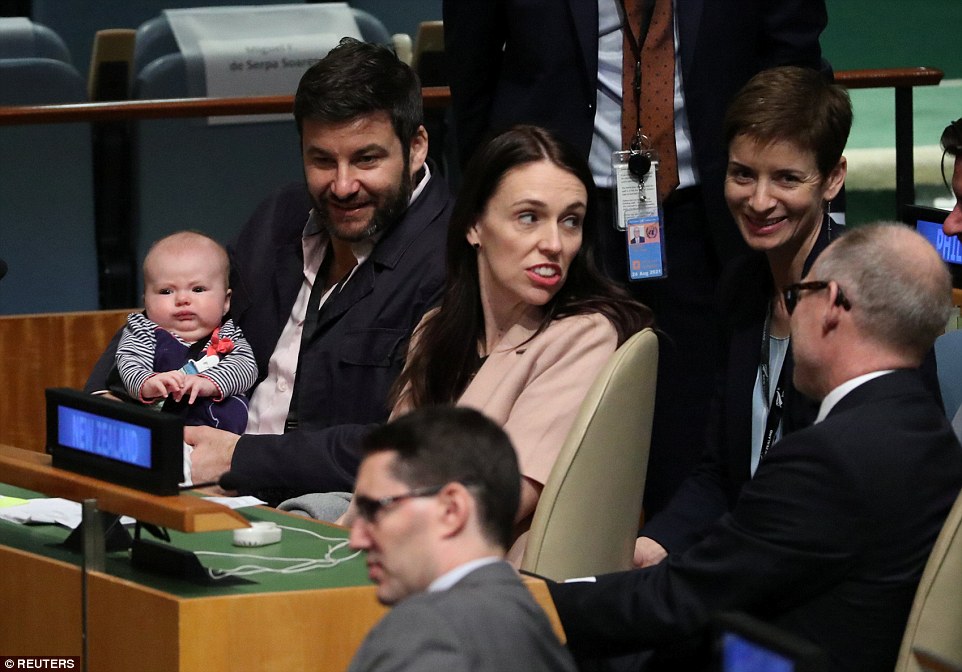 Baby Neve wore an adorable striped shirt as she watched other leaders speak during the summit, which is being held in New York this week 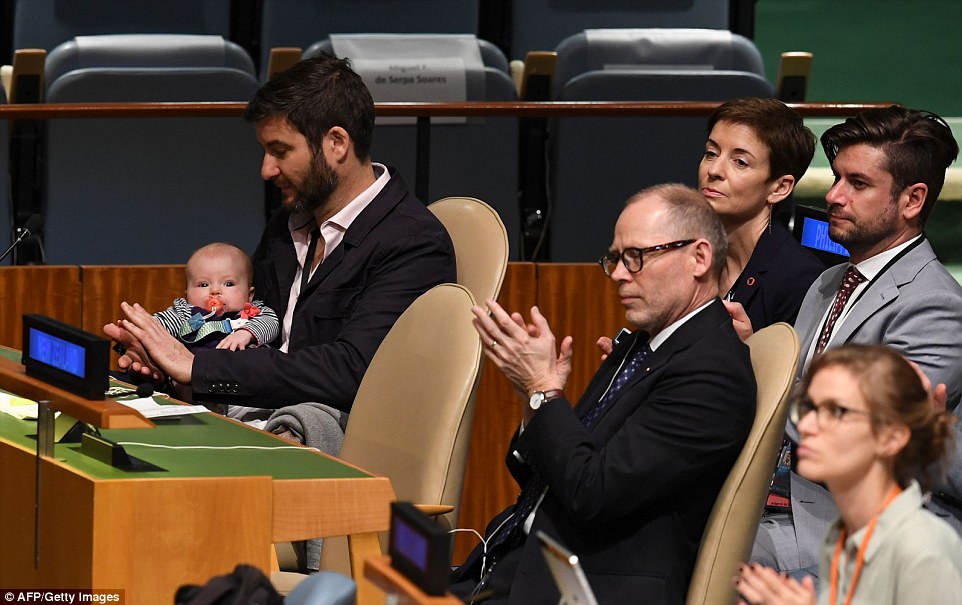 ‘Parents who do it on their own, my appreciation for that has increased tenfold.’

She said apologised to passengers ahead of their flight to New York as the pair took baby Neve on board.

‘There’s that look though that you get when you walk on a plane with a little one, that stare from other passengers, which I felt very conscious of.’ 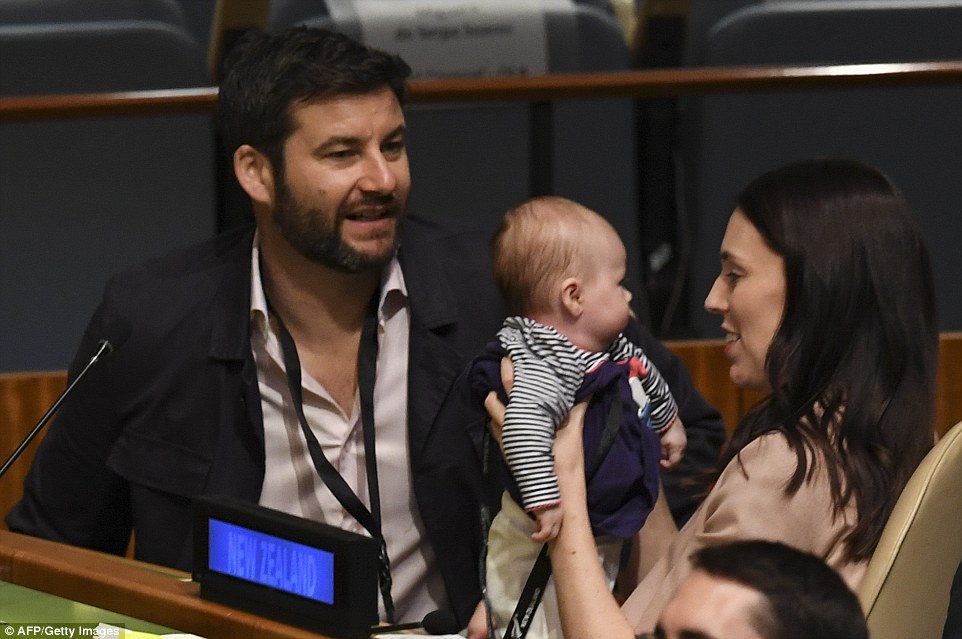